Purpose: The main difficulty with liver surgery is blood loss. It is hard in this case to achieve hemostasis because of the oozing bleeding. The aim of this study was to compare the coagulation efficiency of cold plasma treatment with hemostatic Oppel during liver resection.
Methods: Adult male Wistar rats were randomly separated into 3 groups of 10 rats each. Group 1(control) included intact animals without surgical intervention; group 2 experimental)- animals after atypical liver resection with hemostatic suturing; group 3 (experimental)-animals after atypical liver resection with hemostasis using cold plasma. Histological and biochemical analysis were carried out on the 90th and 180th days after liver resection.
Results: Biochemical blood analysis revealed insignificant fluctuations in glucose (p<0.05) in experimental groups relative to the control group other parameters remained unchanged. Complete restoration of the organ structure was noted in the cold plasma group on the 180th day. Destructive changes have been preserved in the hemostatic Oppel group by this time.
Conclusions: Hemostasis with a cold plasma leads to a rapid stop of bleeding. In this case there is a recovery of all liver functions and of internal blood flow with the preservation of all biochemical blood parameters on the 180th day. Application of the hemostatic Oppel leads to dystrophic and necrotic changes in hepatocytes, as well as the morphological features of microvascular thrombosis and perivascular fibrosis which persist up to 180th day.

The use of partial hepatectomy has increased during recent years. Fast hemostasis in this case is hard to achieve, because the vessels in the sinusoidal structure are too small to be ligated [1]. Morbidity associated with uncontrolled hemostasis is still relatively high because of the amount of blood loss. Therefore, controlling severe diffuse parenchymatous bleeding still remains a big challenge. Many different surgical techniques have been developed for this purpose. Among them are diathermy, argon beamer coagulation, Pringle maneuver, total vascular exclusion, and use of topical agents such as oxidized regenerated cellulose, absorbable gelatin sponge, microfibrillar collagen, and fibrin sealant [2,3]. Typical blood loss in major hepatic resection ranges from 800–3,000 ml [4]. Rapid hemostasis of the injury site is the key to successful tissue surgery. Thrombosis is another important manifestation, particularly in patients who are challenged by infection or surgery.

In physics, “plasma” means a hot ionized gas consisting of approximately equal numbers of positively charged ions and negatively charged electrons; while in medicine and biology “plasma” is known as the non-cellular fluid component of blood. In the last decade, atmospheric cold plasma was applied in many clinical aspects, such as with wound healing [5-8], dermatology [9-11], inactivation of a virus [12], chronic venous leg ulcers [13], cancer therapy [14-17], dentistry [18], and so on.

Chemical reactions in low-temperature plasma differ from reactions in conventional chemical systems. The essential difference lies in the presence of charged particles and particles in the excited state. Plasma is a rich source of radicals and other active species: radicals like O, OH and HO2, peroxide anions O2- and HO2-, ozone and hydrogen peroxide. These species are relatively long-lived and can reach the cell and attack the organic matter. Several effects can be identified leading to cell injury: Oxidation of unsaturated lipids in the cell membrane; DNA damage; Protein oxidation.

However, the most important feature of the plasma treatment is that a great flux of charges reaches the surface of the living tissue. These charges may consist of both electrons as well as positive and negative ions.

Experiments were conducted under the consents of the local Ethics Committee for Animals Research (protocol No. 2029) of Siberian State Medical University. All procedures were conducted in accordance with European Convention for the Protection of Vertebrate Animals used for Experimental and Other Scientific Purposes Strasburg, 18.III.1986. Adult male Wistar rats (200-220 g) were separated into three groups, as follows: control group, intact animals; group I, animals after atypical liver resection and hemostatic sutures; group II, animals after atypical liver resection and coagulation with cold plasma. Five animals per group were employed for every control time point. All surgical procedures were performed by one person. The animals were anesthetized with an intramuscular injection of Zoletil-100 (Virbac, France) followed by a single intramuscular injection of 0.1 ml of the XylaVET (Pharmamagist Ltd, Hungary). Access to the liver was performed by midline incision laparotomy. After exposure of the liver, the lobes were lifted and part of the left lobe 1.3 × 0.7 cm in size was removed. Then hemostatic seams were imposed or the bleeding surface processed with cold plasma until complete coagulation. Plasma was generated by applying pulsed (5 kHz) voltage of ~ 25 kV magnitude between the insulated high voltage electrode and the liver using the developed plasma source. Appearance of the discharge is shown in (Figure 1). 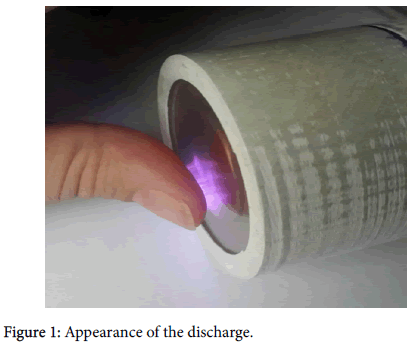 Figure 1: Appearance of the discharge.

Electrodes of several sizes are developed, from 50 mm in diameter to 5 mm. The glass of 1 mm thickness is used as the dielectric. The discharge gap between glass and the sample was fixed at 2-3 mm. The electrode was moved around the surface of the liver. Discharge power density was 2 W/cm2. The temperature of the plasma was about 40°C.

Next, the liver was placed into the abdominal cavity, the wound was sutured and an aseptic bandage imposed. Blood and liver samples were collected on 90th and 180th days. Biochemical control was performed by blood testing in experimental animals at the target dates: glucose, alanine aminotransferase (ALT), Aspartate Aminotransferase (AST), timole test, total and direct bilirubin, alkaline phosphatase, total protein, urea, α-amylase, C-reactive protein, fibrinogen, prothrombin time. To analyze tissue and cell changes, histological samples were taken from the region of hemostasis in all experimental groups on the 90th and 180th days with subsequent fixation in a 10% solution of neutral formalin, dehydration by alcohols and pouring into paraffin by standard method. Light microscopy was implemented on sections stained with hematoxylin and eosin, and the severity of fibrosis was assessed on preparations stained with picrofuxine according to Van Gieson. The results of the analysis are presented in the form of a median and quartile ranges - Me [Q1-Q3]. Statistical study of quantitative data was performed using the nonparametric Kruskal- Wallis and Mann Whitney criteria.

Appearance of the liver after treatment with cold plasma and hemostatic Oppel is shown in (Figure 2). The average processing time for cold plasma was 30-45 sec. There were no lethal outcomes. The time of application of the haemostatic sutures was more than 5 minutes, one animal died from bleeding. Assessment of biochemical parameters of rat blood in different experimental groups is shown in (Table 1). Figure 2: Appearance of the rat liver after hemostasis with cold plasma (right) and hemostatic Oppel (left).

When analyzing independent data, it was revealed that such parameters as ALT, AST, total bilirubin, α-amylase, alkaline phosphatase, urea, fibrinogen, APTT, PTT, INR do not have statistically significant differences in all groups. The level of direct bilirubin and C-reactive protein was negative in all groups. Plasma group had a statistically significant difference in the total protein on the 90th day, which increased relative to the control group, however, the glucose level decreased relative to the control group. In the hemostatic Oppel group total protein and thymol test increased relative to the control group but glucose decreased. The glucose level is lower in the plasma group relative to the hemostatic Oppel. No statistically significant differences were found between the plasma group and the hemostatic Oppel on the 180th day.

Evaluation of morphological parameters of the liver tissues in the experimental groups was performed on the 90th and 180th days (Table 2).

The liver of the control group had a typical structure. In the liver of the plasma group differences in all morphometric parameters, except for the specific volume of binuclear hepatocytes (p=0.268) were revealed on the 90th day. All indicators have increased in comparison with the control group. A similar dynamics was found in the hemostatic Oppel group. When comparing the hemostatic Oppel group and the plasma group on the 90th day, a statistically significant (p=0.0001) decrease in the total number of hepatocytes with signs of dystrophy and density of the inflammatory infiltrate was revealed in the last group. Signs of sinusoidal capillaries and central veins expansion were determined in the hemostatic Oppel group on the 180th day. Degenerative changes in hepatocytes with pronounced signs of protein dystrophy persisted. Fibrosis is expressed, mainly, perivascular. Parenchyma of the liver in the plasma group on the 180th day consisted of hepatic lobules, separated by small interlayers of connective tissue. The hepatic lobule retained its normal structure, most of the hepatocytes had normal feature. However, vascular changes at the level of the sinusoidal capillaries persisted (Figure 3).

In the present study the efficiency of hemostasis with the use of hemostatic Oppel and cold plasma during rat liver resection was investigated. Cold plasma has many advantages in comparison with other methods of hemostasis, namely: low temperature, which allows to avoid thermal damage to the body, the development of burns, necrosis and, as a result, excessive development of scar tissue. Plasma treatment may be able to bypass the normal blood coagulation cascade and interfere directly with the later stages of the process, which gives a pronounced hemostatic effect with minimal damage to the organ parenchyma [19]. An additional advantage of cold plasma is the absence of factors that cause ischemia of the treated surface. On the contrary, the most pronounced negative effect have hemostatic sutures that cause additional damage to the parenchyma of the liver, the development of mechanical ischemia directly in the area of suturing and in the distal part of the resected organ. It seems, that the main factor in the pathogenesis of the development of scar processes (with the possible deformation of the organ) in the field of the liver resection is hypoxia, which causes a number of pathogenetic changes, eventually resulting in autolysis of the distal part of the resected organ in the early stages. At late times (90th and 180th days), the gland tissue "suffers" from the development of connective tissue (scar). In the plasma group, these phenomena are leveled, which confirms the complete restoration of the liver structure.

The use of the hemostatic Oppel led on the 90th day to the dystrophic and necrotic changes in hepatocytes, as well as the morphological features of microvascular thrombosis and perivascular fibrosis in the liver. These violations persist until the 180th day. Hemostasis with cold plasma led to pathological changes in parenchyma of the liver on the 90th day, manifested in the form of vascular thrombosis and perivascular fibrosis with complete repair of the morphological pattern of the liver and restoration of the internal blood flow with preservation of all biochemical indicators of blood to the 180th day. The advantages of plasma coagulation are: fast hemostasis, no damaging effect on the surrounding tissue, preservation of morphometric characteristics, destruction of harmful bacteria during surgery.

The Authors declare that there is no conflict of interest.

This research did not receive any specific grant from funding agencies in the public, commercial, or not-for-profit sectors. 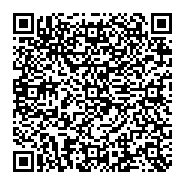