Separation of pubic symphysis is considered a complication of vaginal childbirth or pregnancy. A pubic symphysis gap wider than 10 mm combined with clinical symptoms can allow for a diagnosis of perinatal pubic symphysis diastasis [1]. The incidence reported in China and elsewhere has been approximately 1/300 to 1/30000 [2-6]. The incidence is not high, but it seriously affects the psychological and physical health of parturients. At present, there is a lack of understanding of postpartum separation of pubic symphysis, and many patients with separation of pubic symphysis have not been diagnosed and treated in time. This is also the reason for the great difference in regional incidence. There is no gold standard for the treatment of pubic symphysis separation, and reports on the treatment of old pubic symphysis separation are even rarer. Some literatures reported that the separation distance was more than 2.5 cm recommends surgical treatment [7]. A diastasis greater than 14 mm indicates attendant damage to the sacroiliac joint [8]. Changes in the sacroiliac joint can affect the stability of the pelvis and lead to complications such as pain in the pelvic band and abnormal gait. Therefore, timely diagnosis and appropriate treatment are very important. Physi CAL proposed the tissue stress remodeling theory, which combines the histopathology, the law of tension-stress, the viscoelastic theory of tissue, biomechanics and anatomy. On the basis of this theory, the conservative treatment of postpartum pubic symphysis separation with three-dimensional continuous traction+pelvic band fixation+exercise therapy was developed. This method has not only theoretical innovation, but also outstanding clinical effects. The typical pathological reports are as follows.

A 31-year-old woman came to see her 3 months after delivery because of pain at the pubic symphysis and limited movement. The patient was previously healthy, with no history of metabolic diseases, fractures, scoliosis, or eating disorders. The family history was unremarkable. Her weight gain during her first pregnancy was 17 kg, and a vaginal delivery at 39 weeks and six days with a fetal weight of 3760 g.

Physical examination: Tenderness at the pubic symphysis, VAS pain score 6, showing a swaying gait. Bilateral iliac crest and anterior superior iliac spine are asymmetrical, right low and left high, both lower limbs are unequal in length, and the right lower limb is about 5 mm longer than the left lower limb. The SF-36 quality of life score was 131 points.

Auxiliary examination: 8th August in the year 2020 pelvic X-ray showed that the ilium was high on the left and low on the right, and the pelvis moved slightly to the right. The separation distance of pubic symphysis was about 46.96 mm.

Three-dimensional traction was performed under suspension, and the patient took the supine position, and the narrow band of the suspension system Sling Exercise Tiain (SET) was fixed under the armpit and both ankles with an inelastic rope for longitudinal traction. The SET broadband fixed the pelvis with an inelastic rope, and the elastic rope at the pelvis was pulled across to solve the horizontal separation of the pubic symphysis. Adjust the traction direction, angle and strength of both lower limbs according to the three-dimensional information of pubic symphysis joint and sacroiliac joint. To solve the problems of pronation, supination and tilting of unilateral pelvis, adjust the sacroiliac joint and bilateral hip joint under the action of gravity and traction, and realize the alignment and alignment reduction of pubic symphysis (Figure 1). Based on the tension-stress rule of illizarov theory and the viscoelastic theory of soft tissue, the traction time is not less than 1 hour, twice a day, and the periodic evaluation is carried out every week. August 20 in the year the suspension traction began. After 3 weeks of traction, the left and right sides of the sacroiliac joint were stopped and entered into the next step of treatment. 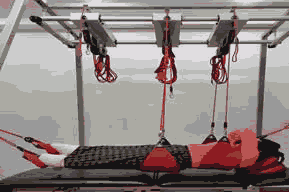 The patient took the supine position and placed his hands in front of the chest. The SET narrow band was placed at the ankle joint and under the armpit, the wide band was placed at the pelvis with inelastic rope, and the fixed pelvic belt was placed on the inside of the wide band. The pelvis of the patient was removed from the 30 cm of the suspended bed with SET, and the 30 minutes was suspended. The narrow band fixed in both ankles and armpits was pulled longitudinally for 20 s, while both ankles were rotated at an angle of 45°, and finally the pelvic band was fixed.

After three-dimensional reduction, the X-ray film showed that the reduction was successful if the pubic symphysis and sacroiliac joint were positioned and the alignment was good.

Re-examination and exercise training after reduction

After reduction and fixation of pelvic band, the outpatient clinic was reexamined every 2 weeks.

•The Visual Analogue Scale (VAS) pain score was 6 before treatment, 2 when the pelvic band was removed, and 1 at follow-up 2 months after the removal of the pelvic band.

•SF-36 quality of life scale score: The specific scores are shown in Table 1. 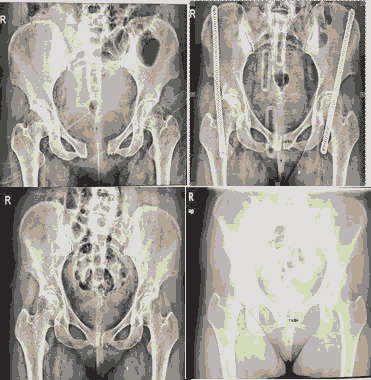 The case reported in this paper is to solve the anatomical abnormality of sacroiliac joint by applying the tissue stress remodeling theory. The tissue stress remodeling theory believes that continuous stress stimulation can cause structural changes and functional improvement of human tissues. Using different forms of force to give personalized treatment to patients can achieve the purpose of tissue and function remodeling. According to the theory of tissue stress remodeling, the treatment of pubic symphysis separation after postpartum should be divided into four steps, that is, improving symptoms, adjusting structure, stabilizing structure and remodeling function. Symptom relief as the first step in treatment is due to the needs of patients, according to the different symptoms of patients can be given symptomatic treatment. Structural adjustment is the core of tissue stress remodeling therapy system. The system adopts chronic continuous traction for structural adjustment. Due to the viscoelasticity of tissues, the soft tissues around joints undergo a process of creep, plasticization and deformation under a small load and a long time of stress loading. In this process, in addition to the relaxation of tissues under the pull of force, tissues are regenerated under the action of tension-stress, namely the tension-stress rule and tissue regeneration rule [12,13].

Although the old separation of the pubic symphysis is an old dislocation, the anatomy of this joint is special [14]. The symphysis pubis is an amphiarthrosis formed by hyaline cartilage on both sides. Ligaments attached above, below, in front and behind the joint maintain the joint state. Such structural characteristics make the joint dislocation rarely have connective tissue hyperplasia. B ultrasound and MRI both confirmed the low signal at the pubic symphysis of patients with old pubic symphysis separation, proving that there is rarely granulomatous hyperplasia between the joints. This is the anatomic reason for the feasibility of conservative reduction of old pubic symphysis separation. Compared with the acute stage of pubic symphysis separation, the patients with old pubic symphysis separation did not have the condition of immediate restoration. The patients with old pubic symphysis separation were often accompanied by shortening, tearing and adhesion of ligaments, fascia and muscles as well as relative displacement of ilium and sacrum. According to the viscoelasticity theory of tissues, the elasticity of tissues makes them have the tendency to restore deformation. Therefore, the abnormal structure and morphology of these soft tissues and joints make it difficult to fix the reduced joints in the correct position. Therefore, these structural abnormalities should be recovered before joint reduction. When biological tissue is slowly pulled, a certain tension can stimulate tissue regeneration and active growth. It grows like fetal tissue by dividing cells. Human skeleton, like epithelial tissue and connective tissue, has great regenerative potential and plasticity. Give the bone a proper stress pull, and the bone and the muscles, fascia, blood vessels, and nerves attached to it grow in sync. Through continuous traction, stress relaxation, creep and regeneration of abnormal soft tissue were induced, and the normal anatomical position was gradually restored. At this point, the correct mechanical pull is easier to reset.

As mentioned above, according to the viscoelasticity theory of tissues, tissues have a tendency to recover deformation [15]. Therefore, the sacroiliac joint is reduced under suspension and fixed mechanically and anatomically for 6-8 weeks by a special pelvic band after reduction. At this time, the soft tissue is in a healing state, and the reduced joint will not be re-misplaced due to soft tissue elasticity. In this study, no symphysis pubis separation was observed after pelvic girding was removed. It can be seen that chronic continuous traction, three-dimensional reconstruction reduction and continuous pelvic band fixation are feasible for the treatment of the separation of the old symphysis pubis, and the clinical effect is satisfactory.

After three-dimensional reconstruction and fixation of the old symphysis pubis, the sacroiliac joint and the symphysis pubis can restore the normal para-position and line-to-line relationship, which is conducive to correct stimulation of joint proprioceptors, muscle spindle of muscles and tendons, golgi body and other proprioceptors, and effective recovery of proprioception. Proprioception plays a decisive role in pelvic motion control and postural stability. Therefore, the exercise therapy adopted by the research group started after the reduction and fixation of the sacroiliac joint and pubic symphysis, which produced better results in the stability training of the pelvis. The exercise therapy treatment under suspension for 4-6 weeks can achieve the stability of the pelvis and remove the pelvic belt.

Eoretical basis and clinical practice proved that the conservative treatment method of separation of the symphysis pubis adopted in this study, continuous traction under suspension+three-dimensional reconstruction+pelvic restraint fixation+exercise therapy, has strong theoretical feasibility, accurate clinical efficacy and effective improvement of patients' quality of life. This systematic conservative treatment method is worthy of promotion.

Thanks to the funding of Taiwan science and technology development plan foundation (2020NS118).