Consideration of Physiological Monitoring in the Study of Anxiety Research

Anxiety disorders are one of the most prevalent classes of neuropsychiatric disorders in urban society [2]. It is the sixth leading contributor to disability worldwide [3]. This psychosomatic and stress disorder significantly influence the degree of quality of life and bodily functioning [4]. Anxiety disorders often lead to increased medical service, societal costs, and psychiatric and physical comorbidity [5].

Provided the physiological damage caused by this disorder, there is an absolute need to examine the factors that put individuals at risk of developing anxiety [11]. The overlapping symptoms in various anxiety disorders imply the presence of common underlying risk factors [12]. Risk factors are defined as the variables present before the onset of the disorder. These factors contribute in the development of the various anxiety associated symptoms [13]. Thus, the identification of risk factors is one of the first steps in the classification of anxiety disorders (Figure 1) [14]. 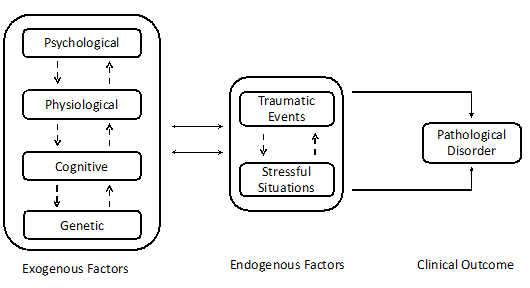 Anxiety is characterized as a heightened fear response [15]. It is the direct effect of hyper-excitability of the fear circuit [16]. Various psychophysiological signatures have been used in the investigation of anxiety [17]. Here, the relevance in the alteration of psychophysiological responses as an indicator of anxiety disorder is briefly described [18]. Evidences are accrued from neurobiology for the altered brain circuitry related to anxiety disorder [19]. Hyper-excitability of the amygdala and hypo-excitability of the prefrontal cortex are the prime characteristics bio-mechanism of altered circuitry of fear in anxiety affected individuals [20]. Neuroimaging studies affirmed the heightened activity in the amygdala and reduced activity in the prefrontal cortex in traditional fear conditioning paradigms in humans [21]. Moreover, outcome of effective treatment methodology reported the reduced amygdala activity in patients with social phobia [22]. Heightened anxiety affects the behaviour that facilitates various psychophysiological responses. Investigation of the associated psychophysiological responses will improvise the treatment methodology of anxiety [23].

Considering the complexity and the severity of anxiety disorders, it is only ideal to understand pre indicators of the commencement of its symptoms [24]. Through this study, we wish to explore the possibility of recognising anxiety disorders using objective parameters like blood or Cerebrospinal Fluid (CSF) tests, genetic tests, brain imaging methods or through their combination [25]. Biomarkers can be used for evaluating the severity of the disorders prognostic ally to address the differential response to treatment modalities. Identifying novel biomarkers can thus help to detect the underlying biological basis of anxiety disorders, Social Anxiety Disorder (SAD) and Specific phobias and subsequently come up with targeted preventive interventions. Such measures can work as ‘‘precision medicine’’ in order to develop customised therapies that may prove to be more effective. It has been suggested that several biological factors influence treatment mechanisms in anxiety and therefore could be identified as possible biomarkers foretelling treatment response (Figure 2). 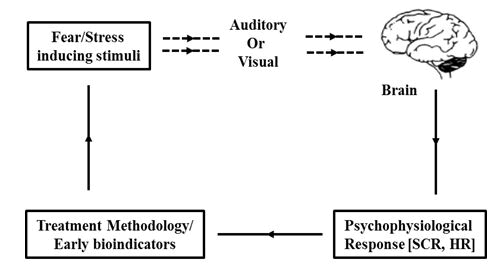 Figure 2: Schematic diagram demonstrating the effect of fear/stress information on human brain and physiology which might be used as a biological marker.

Electrodermal Activity (EDA) or Skin Conductance Response (SCR) is a vastly used method in the field of fear and anxiety research. Its application is highly recommended in human cognition, particularly in the fear conditioning paradigm (Table 1). Distinct stages in fear conditioning paradigm have helped to unravel the synergy of pathological learning processes and memory mechanisms. Moreover, it has significance in consolidation and reconsolidation with regard to pathological memory. It has already been affirmed that SCR is a cognitive oriented response. Recently, SCR has emerged as a promising indicator of anxiety disorder. SCR is measured using two electrodes attached to the fingers of the non-dominant hand of the study subject. The changes recorded in EDA level can predict the progression and persistence of anxiety disorder. In conditioned fear and anxiety symptomatology, SCR is an effective parameter of measurement. In general, fear and stress situations facilitate vasoconstriction of the peripheral blood levels. As a result, there is an increase in blood flow to those parts of the body that are involved in either fight or flight response. Several investigations indicated the alteration in SCR is a promising area of physiology. As stated earlier, SCR is a cognitive oriented response hence it seems to be a reliable indicator of emotional arousal, and possibly, it is superior to startle as indices of anxiety disorder. Henceforth, it is worth comparing the SCR with other types of physiological measures commonly used with clinically effective individuals of anxiety disorder. In short, SCR has attracted researchers from various domains as a prospective physiological indicator of human fear and anxiety disorder. There are certainly other methods (e.g. FMRI, NIRS, and PET) of investigations of fear and anxiety related studies. Nevertheless, SCR is often used as a response to the detection of fear and anxiety. The reasons for such preference of SCR over others are that it is cost-effective, non-invasive, and provides a reliable data source. It is relevant to note that SCR is used in a wide array of scientific research for instance attention, emotional memory. Specifically, some previous studies had revealed that SCR is a more cognitive-oriented response. It must be noted that though, SCR is a highly recommended measure in fear and anxiety research; it may not always acquire the precision of fear and anxiety response and must be accompanied with other parameters like subjective ratings, startle, HRV, etc.

In the presence of novel or threatening stimuli, basic animal and human models suggest the changes in the distribution of the blood from viscera to the brain and muscles. This highlights the preparedness for either ‘fight’ or ‘flight’ in the presence or anticipation of threat. Experimental studies have established the fact that cardiac responses are the most effective and efficient measure in the field of anxiety or stress disorder. A wide variety of studies had reported and considered the cardiac response changes as a determinant of various psychiatric or neurological disorders. Cardiac response change is the direct effect of the distribution of the blood from viscera to the brain and muscles. This suggests the preparedness for either ‘fight’ or ‘flight’ in the presence or anticipatory threat. The cardiac response has been considered as a marker for anxiety and stress disordered. The most common cardiac response measure during threat learning is the Heart Rate Variability (HRV). It is the alteration of heart period over time. Reduction in HRV is the hallmark of anxiety disorder and appears to be a reliable marker. Previous research studies have interconnected the involvement of similar brain regions with HRV and anxiety i.e. amygdala and prefrontal cortex. The major question one might ask about if HRV is a voluntary or involuntary response in nature. Empirical studies have established that HRV not only serve as an index for anxiety and stress disorder but also as a diagnostic marker in various other psychiatric disorders like other physiological responses such as SCR, respiratory response (RSP), cortisol etc. However, various other physiological factors influence the HRV directly such as gender and age, etc. Although research and clinical implications of HRV are profoundly illustrated, the HRV significance with respective to other physiological responses (e.g. SCR, EMG, BP, etc.) have not been studied systematically. The basic HRV data analysis comes under three major domains: (I) time domain, (ii) frequency domain, and (iii) non-linear domain. Different studies have selected and performed different HRV data analysis, based on their proposed hypothesis. In the frequency analysis, the relevant measures are as follows: Very Low Frequency (VLF), low frequency (LF: 0.01-0.15 Hz), high-frequency (HF: 0.15-0.40 Hz), Very High Frequency (VHF), and low to high frequency ratio (LF/HF). The HRV was analysed using the LF, HF, and LF/HF ratio for review (Table 1).

Table 1: Brief summary of parameters and results with regard to human fear conditioning paradigm.

It is noteworthy that stress hormone cortisol (i.e. glucocorticoid) is a significant indicator for anxiety and stress disorder but also used as a diagnostic marker in various other psychiatric disorders. Majority of cortisol studies have been reported increase in salivary cortisol as a direct measure of fear acquisition and risk factors for the acquiring of affective disorders. Moreover, significant alterations in cortisol have been noticed with regard to sex-difference. Showed the combined effect of sex and stress hormone in pre and post-fear acquisition. In regard, altered cortisol level has been noticed in the fear conditioning paradigm. Men tend to show elevated level in stress hormone cortisol level compared to women during post-acquisition. The findings suggest the sex-mediated the stress hormone cortisol level. Administration of cortisol pre-learning can impair memory acquisition. Stress triggers the Hypothalamus Pituitary Adrenal (HPA) axis along with several notable hormones such as cortisol, epinephrine or Corticotropin Releasing Hormone (CRH), etc. In humans, administration of cortisol result into reduction of glucose uptake in hippocampus. Hakamata and group (2017) reported the positive correlation between amygdala and cortisol levels. This means increase in stress increases cortisol, which ultimately activates amygdala and frontal cortex. It turned out that cortisol is an important indicator of affective disorder, and could also be considered as an early diagnostic biomarker. Nevertheless, the main issue has been unaddressed from long time i.e. the cortisol application as a direct measure and its limitation in the fear acquisition and risk factors for the development of anxiety and related disorder. Increase in cortisol level takes roughly 2 hours to reach baseline again for another measure. Hence, it might be challenging for the researchers to monitor the alteration in cortisol levels and performing a study at different time.

The ability to recognize and properly respond to anxiety disorder is critical for developing effective treatment of anxiety and affective disorder. Although, physiological response is one of the most widely used threat based response for studying the conditioned fear and anxiety disorder. Physiological techniques have been used to investigate the physiological response in emotional learning and memory processes, yet its full application has been completely ignored in the field of psychophysiology. Firstly, hormonal differences (pregnancy, the menstrual cycle, or menopause) play an important role. Some recent studies have started to consider the gender specificity in affective stimuli processing. Specifically, fear conditioning studies have strictly followed the gender and ethnicity differences. Secondly, there is lack of multi-measure establishment with respective to fear and anxiety research. Thirdly, there is a lacuna in interpretation of physiological data i.e. SCR, HRV, or startle data. Finally, association and comparison of physiological responses in human and animal for conditioned fear and anxiety disorder remained out of focus. But it depends on how we choose to answer the existing problem and how we approach to address the problem. This is true for both simple question in anxiety and stress disorder and for complicated questions. Although, decades of fear and anxiety research has made it possible to develop various effective methodologies in the identification, and investigation, yet the modern research lacks the approach for the effective treatment methodology (Table 1). Based on this literature review there is a need for a more specific experimental approaches in the near-future. This line of research will not only explore the multi-sensory measuring approach but also contribute to the understanding of anxiety and its psychophysiology.

MKA is supported by F.I.G. grant (IITR/SRIC/2741). The funding agency had no role in the preparation of the manuscript. MKA wrote the full manuscript and SB gave some valuable insight and comments.

The authors declare no competing interest. 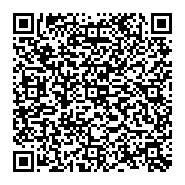