Background and Objective: Gender based violence (sexual and /physical), frequently occurs in institutions assumed to be ‘safe’, such as schools, where perpetrators include peers and teachers. School-related gender-based violence includes but is not limited to rape, unwanted sexual touching, unwanted sexual comments, corporal punishment, bullying and verbal harassment that is based on gender stereotypes which targets female students on the basis of their sex. It is a widespread barrier to girls’ attaining educational equity, which also brings with it many health risks. This study aimed the correlates of sexual and physical violence among female preparatory students in Garage zone, Ethiopia.
Materials and Methods: Institution based cross-sectional descriptive study was conducted in preparatory schools of Gurage zone on March 2017. A multi-stage stratified sampling with simple random sampling technique was applied to select the study participant. Data were collected using a pre-tested structured selfadministered questionnaire. The collected data was cleaned and entered in to Epidata3.1 then exported to SPSS version 20:00 for analysis. Finally, a multivariate logistic regression model was created predict the correlates of sexual and physical violence among female students.
Result: A total of 686 female preparatory students participated in the study, giving a response rate of 90.3 %. The finding showed that the prevalence of sexual and physical violence were 15.9% and 47.5% respectively. Forceful/ unwilling sex accounts 42(38.5%) from sexually active female students. Age group (i.e. Age<18
years); [AOR 1.72, 95 % CI=1.02, 2.84] and monthly received pocket money [AOR 1.37, 95 % CI=1.06, 2.78] were statistically significant predictors of sexual violence. Whereas, substance uses (i.e. Khat chewing, drinking alcohol and cigarette smoking) were statistically significant determinants of sexual and physical violence among female students.
Conclusion: The study has shown that the prevalence of both sexual and physical violence among female students is found to be relatively higher. Thus, designing specific strategic activates towards early detection, identification and prevention of school related gender based violence through provision of different regular information and communication and empowerment of female students is implicated.

Although educational establishments are recognized as places of learning, personal development and empowerment, schools are too often places of discrimination and violence, particularly against girl students. School-related gender-based violence (SRGBV) covers all forms of violence or abuse based on gender stereotypes or aimed at girls on the basis of their gender. It results in sexual, physical and psychological harm to girls [1]. It includes, but is not limited to rape, unwanted sexual touching, unwanted sexual comments, corporal punishment, bullying and verbal harassment that is based on gender stereotypes or that targets female students on the basis of their sex and results in sexual, physical or psychological harm to female students [2].

SRGBV has a long-lasting negative impact on students’ academic performance as well as their physical health and mental wellbeing. Several studies point out that the consequences of SRGBV adversely affect girls’ educational attainment. Girls report losing their concentration in class, feeling bad about themselves, missing school, and even dropping out (often causing them to leave school after actual gender-based violence or for fear of it). It also has health related consequences in terms of increased exposure to sexually transmitted infections (STIs), including HIV/AIDS, and unwanted pregnancies are also devastating [3].

Sexual and physical violence are the most commonly identified form of SRGBV. Global estimates indicate that almost half of all female students experience some form of sexual and physical violence in the educational context [4]. Studies from around the world, including Africa, south Asia, and Latin America, have documented that substantial proportions of female students report experiencing sexual harassment and abuse on the way to and from school by peers and by teachers [5]. This type of violence is less documented than violence in general, and it even seems to be trivialized. Yet despite such trivialization, school-related sexual abuse often remains a taboo issue, making it difficult to be identified, recognized, dealt with and prosecuted [6].

Generally speaking, evidences related to gender based violence in our country especially in preparatory school settings is scarce. The prevalence, frequency and intensity of violence among girls found in preparatory schools have not yet been the subject of research in Gurage zone. To the best of the researcher knowledge, there is no comprehensive research conducted in the region for reporting acts of school-related violence. Therefore, this study was conducted to assess the correlates of sexual and physical violence among female preparatory students in Garage zone, Ethiopia.

The sample size was calculated using a single population proportion formula with confidence interval of 95% and margin of error 5%. In the calculation, the prevalence of sexual violence was considered to be 34.4% [7]. Then, by considering 10% non-response rate and design effect of 2, the final sample size was 760 female students.

Data was collected using eight data collectors and four supervisors through pre-tested, structured and self -administered questionnaires. The questionnaire was developed after thorough review of various literatures relevant to the study and prepared in English language. Before the actual data collection, the questionnaire was pre-tested on 5% (38subjects) in one of unselected preparatory school. Finally, filled questionnaires were checked for completeness and consistency of the data by the principal investigator on daily basis.

Before conducting the study, the proposal was publicly presented, defended and letter of ethical clearance approval was obtained from Wolkite University, Research Ethical Review Board (RERB). The purpose of the study was explained to the study participants, anonymity and privacy and confidentiality was ensured. Prior to data collection, informed written consent was obtained from the study participants. While obtaining consent from each participant, information related to publishing the study finding were addressed. The respondents’ right to refuse or withdraw from participating in the study was also fully acknowledged.

The collected data was cleaned, coded and entered into Epi-data software version 3.1 and then exported to Statistical Package for Social Sciences (SPSS) version 20:00 for analysis. First, descriptive analysis was carried out for each variable. Variables with a p value <0.25 in bivariate analysis were entered into the multivariable logistic regression, and then those variables with a p value <0.05 were considered to be statistically significant in multivariate analysis.

Regarding respondents sexual history out of the total 686 female students, 118 (17.2%) ever had sex since they entered preparatory school of which 42 (35.6%) had unprotected sex, 23 (54.8%) had been pregnant and the majority 14 (60.9%) experienced unintended pregnancies in which all of them ended in abortion (Table 4).

Sexual Violence and its complications 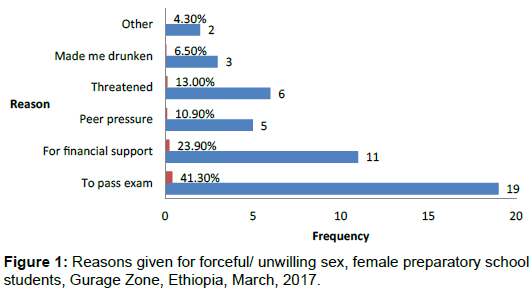 Anxiety 12 (27.9%), Poor academicals achievement 14 (66.7%) and rejection from friends or peers & Drug dependency 6 (40.0%) were the major forms of psychological, academicals and social problems resulted due to forced/ unwilling sex as reported by the respondents (Table 6).

Physical violence and its complications 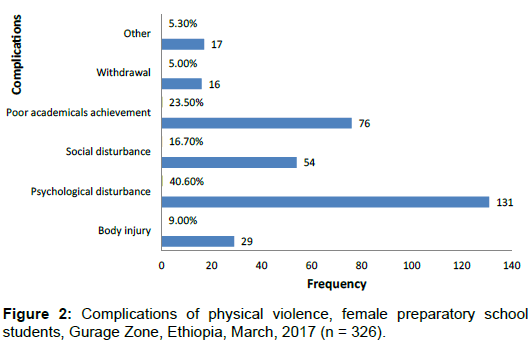 Predictors of sexual and physical violence

The multivariate analysis results show respondents age category, monthly pocket money received from their parents, and substance use habits (i.e. khat chewing, alcohol consumption and cigarette smoking were found to be the determinants of sexual violence.

Female students whose age is less than 18 years encountered sexual violence more likely as compared to their counterpart [AOR 1.72, 95 % CI=1.02, 2.84]. Similarly, female students who earn a monthly pocket money of less than 500 ETB were found to face sexual violence 1.37 times more likely than those who receive a monthly pocket money of 500 ETB and more [AOR 1.37, 95 % CI=1.06, 2.78]. Concerning substance use habits, respondents who did not chew Khat, drink alcohol and smoke cigarette were found to have less likelihood of encountering sexual and physical violence (Table 8).

The finding of this study showed that the prevalence of sexual violence among female students was 15.9%. It is nearly similar with the study findings in some African countries such as in Sierra Leone (14%), [8] and Cameroon, (15%), [9]. However, it is lower than the findings of studies conducted in India [10] and Zimbabwe [11]; the difference might be attributed to cultural difference, beliefs and myth about sexual violence between these countries.

In line with the finding World Health Organization (WHO) Multi-Country Study [13] on women’s health and domestic violence against women (Ecological Frame Work for Gender Based Violence (GBV)), this study revealed a statistically significant associations between respondents substance use habits (i.e. khat chewing, alcohol consumption and cigarette smoking) with sexual and physical violence. The result indicates that female students who were found to chew khat, drink alcohol and smoke cigarette were more likely to face sexual and physical violence as compared to their counterparts. Similar evidences also observed from other institution and community based surveys in Ethiopia [13].

Similarly, the finding showed that respondent’s age group was also significantly associated with sexual violence; it is consistent with the finding of Ecological Frame Work for GBV developed by WHO [14].

Furthermore, the multivariate logistic regression analysis also indicated a statistically significant association between monthly pocket money and sexual violence; accordingly, sexual violence was found to be higher among female students who earn a monthly pocket money of less than 500 ETB than their counterparts. Inability to fully cover their monthly expenses due to Lower levels of income might be the possible explanation which in its turn exposes these students for facing different forms of sexual violence.

Overall, this research has shown that the prevalence of sexual and physical violence was found to be 15.9% and 47% respectively. The result also showed that from sexually active students, forceful/ unwilling sex accounts about 42 (38.5%). Generally, the finding reviled that female student’s age and monthly earned pocket money were found to be determinants of sexual violence. Moreover, substance use (i.e. Khat chewing, drinking alcohol and cigarette smoking) were found to be the predictors of sexual and physical violence among female students.

Therefore, it is recommended that strategy and policy makers (i.e. zonal educational affair office & school administrative) should develop appropriate evidence-based strategies and curricula in schools to prevent school related gender based violence. Thus, designing specific strategic activates towards early detection, identification and prevention of SRGBV through provision of different regular information and communication programs is implicated. Collaborative action with governmental and nongovernmental organizations whose focus is to address sexual and reproductive health services, with particular emphasis to GBV is also recommended. Finally, we recommend a separate and detailed study on the level and the type of forced/unwilling sex among female students, which accounted the major form of sexual violence.

As the study is conducted at zonal level it has strength of being a representative study. However, social desirability bias on SRGBV could be one of its limitations and also cause and effect relationship cannot be ascertained in this study as it is a cross-sectional data.

The datasets used and/or analyzed during the current study available from the corresponding author under the permission of Wolkite University on reasonable request.

Funding for this research project was gained from Wolkite University Research and Community services office.

Bisrat Zeleke: The principal investigator designed the study, collect, analyses and interprets the data, and also drafted the manuscript.

Kenzudine Assfa: Equally participated in conceptualization of the study, design, analyses and interpretation of results.

Dr. Zerihun Haile: Participated in in drafting and critical reviewing the manuscript.