Despite the significant medical progress deep surgical site infections continue to be unresolved problem worldwide. On other hand, although negative pressure wound therapy has been received worldwide recognition, few studies examined its effectiveness in fascial dehiscence. The aim was to perform a microbiological and cost analysis of deep surgical site infections with fascial dehiscence, to delineate the overall trend of surgical
site infections for our hospital and to examine the effectiveness of negative pressure wound therapy in these cases.

Hospital acquired infections (HAIs) are defined as infections occurred during the hospital stay and within 1 month after discharge. Despite the significant progress they continue to be unresolved problem worldwide. According to a recent US survey the number of HAIs in USA in 2011 was approximately 722 000 or about one in 25 hospital patients [1]. The surgical site infections (SSIs) accounted for 22% of them. The rate in Great Britain is about 10% leading to additional costs of £3000 per patient [2]. Probably, the rate is higher due to unreported cases and delayed presentation after discharge in other. On other hand, although negative pressure wound therapy (NPWT) has been received worldwide recognition as an effective technique for temporary abdominal closure in trauma [3,4]; there are few series with fascial necrosis and dehiscence reporting conflicting results [5,6]. The aims are to perform a microbiological and cost analysis of deep surgical site infections with fascial dehiscence, to delineate the overall trend of surgical site infections for our hospital and to examine the effectiveness of negative pressure wound therapy in these cases.

This is a prospective observational study spanning the period 1 October 2014 - 1 December 2016. Only cases with deep surgical site infection and fascial dehiscence after midline laparotomy were included. Exclusion criteria were superficial wound infections, laparotomies other than midline and intra-abdominal complications as well. The wounds were classified as follows: class I – clean, class II – clean-contaminated, class III – contaminated and class IV – dirty [7]. All tissue specimens were taken prior to the initiation of antimicrobial therapy. They were collected in sterile containers and sent to the microbiology laboratory immediately. All samples were evaluated microscopically (Gram stain) and cultured routinely under aerobic and anaerobic conditions. Species identification was performed using an automated system (VITEK 2, bioMe´rieux) and confirmed by MALDI-TOF mass spectrometry (MS-VITEK, bioMe´rieux). Antimicrobial susceptibility was determined by diskdiffusion method [8] and using an automated system (VITEK 2; bioMe´rieux). The results were interpreted according to CLSI 2014 guidelines [9]. All cases with wound dehiscence were treated by one team and managed by a serial debridement, Hydro Jet lavage with 5 L saline and abdominal V.A.C.® (KCI, San Antonio) with negative pressure of 125 mmHg. The overall rate and etiologic structure of deep SSIs (including the rate of so-called “ESKAPE” pathogens - E. faecium, S. aureus, K. pneumoniae, A. baumannii, P. aeruginosa and Enterobacteriaceae), overall trend of in-hospital nosocomial and SSIs, costs and primary fascial closure (PFC) were considered primary outcome measures. Days with NPWT, number of dressings, hospital stay, and mortality were set as secondary outcome measures. Cost analysis included calculation of only two components – clinical support and consumables using the central hospital information system Gamma Code master. The data was compared with the overall data for the surgical clinics according to the last hospital survey published in 2016 [10]. The lenght of stay was compared with the average for all surgical clinics. The study was approved by the Institutional Ethical Committee.

A total 2110 patients was treated in the clinic during the study period and were used as denominator. The overall rate of deep SSIs with fascial dehiscence was 1% (21/2110). The mean age was 70 years (24-82). The risk factors are shown in Table 1. Nine of the cases (43%) had at least two risk factors. Microbiological confirmation of the infection was achieved in 71.4% (15/21). The most commonly isolated strains are shown in Figure 1 overall, 67% of the isolated strains were multidrug-resistant (MDR). Anaerobes were not isolated in any of the samples. The last data (2016) for our institution showed 3% NCIs and 31% SSIs with relative increase of Gram positive flora during the last five years (due to decrease of Gram negative flora) (Figure 2).The results from the NPWT are shown in Table 2. The mean hospital length of stay of the cases vs. average stay for all surgical clinics was 32.7 vs 4.8 days. The hospital costs per case were 719 vs 86 euro, respectively. The cost of the SSIs accounted for 62% from the National health care subsidy for every case. 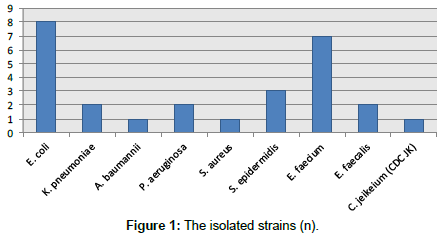 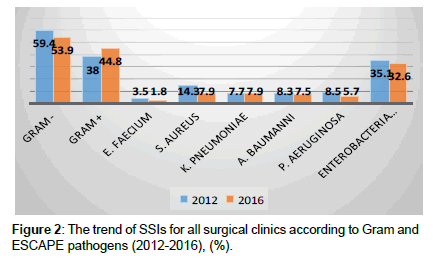 SSIs are the third most common cause for NCIs accounting for approximately 15% of them [7]. In the present series SSIs were associated with over eight-fold increase of the hospital costs consuming 62% from the individual health care subsidy vs permissible 9% for our hospital [10]. Since 1997 a national surveillance system was implemented in our country with encomapssing 130 microbiological laboratories [11]. The rate of NCIs in 2011 was 10% for all hospitals with SSIs in 18.4% [12]. The 2016 rates of NCIs (3%) and SSIs (31%) in our institution are similar to the USA as they were cited in the recent review of Willy, et al. [13]. Approximately, 46% from the reported NCIs are not confirmed including the uninvestigated cases. In the present series microbiological confirmation was obtained in 71% of the cases which is similar to the literature data and higher to the average for our country (50%) [12]. The presence of multidrug-resistant (MDR) pathogens additionally complicated the problem with SSIs. In the present series 67% of the investigated cases were MDR. The so-called “ESKAPE” pathogens appear to be the greatest contemporary health care challenge [14]. Enterococcus was the first bacteria developing acquired Vancomycin-resistance and appeared in Europe in 1980s. It could be significant threat due to its potential to transfer its resistance to other Gram positive and Gram negative species [15,16]. For our country and hospital increased rates of Enterococcus spp. from 4% to 9% [12] and from 11% to 19% during the last 5 years were observed, respectively In the present series they were isolated in 43% of the cases with MDR in 63%. One case with Vancomycin resistance was associated with the longest hospital stay. This rate could be interpreted as outbreak for the clinic. Enterococcus is the most common nosocomial pathogen in Great Britain accounting for 14% of all SSIs [2]. A recent study from China reported Enterococcus spp. as most common isolated hospital strains (E. faecium – 66%, E. faecalis – 22%) with 74% aminoglycoside resistance [17]. Although the focus is on the intra-abdominal infection, according to Dutch Peritonitis Study Group “Enterococcus spp. was associated with the worse outcome although in secondary peritonitis microbial profiles did not predict ongoing abdominal infection after initial emergency laparotomy” [18]. In all cases in the present series the infection and fascial dehiscence manifested between 6th and 9th postoperative day. According to the literature postoperative dehiscence develops in up to 3.5% of all laparotomies but reach 10% in older and debilitated patients. Usually it manifests between 4th and 14th postoperative day and in 20-45% of the cases is a significant risk factor for lethal outcome during the same hospital stay [19]. NPWT of deep wound infections is still controversial. It should be emphasized that commercial NPWT alone cannot cure the wound infection and surgical debridement remains the mainstay of the therapy. Although the pioneers reported decreased bacterial count [20], the subsequent studies showed contradictory results [21,22]. Randomized controlled trial reported decreased count of non-fermentative Gram-negative germs, but increased level of S. aureus [21]. According to a recent review of Huang, et al. a high microbial level was found in all foams [22]. A recent systematic review could not answer„whether VAC can be safely used on any wound without causing or worsening wound infection.“ [23]. The initial literature data demonstrated high rate of late fascial closure (37-48%) in trauma when commercial NPWT was used [3,4]. A recent meta-analysis of only comparative studies, however, could not find the better outcome regarding primary fascial closure in NPWT vs. non-NPWT [24]. As of yet, there are few series with reporting the use of NPWT in fascial dehiscence. Heller et al. reported 38% PFC for average 5 weeks in 13 cases (4 with partial and 9 with complete dehiscence) [5]. Similarly, we achieved 43% PFC rate with in-hospital mortality of 3.5%. The combination of NPWT with the techniques for dynamic fascial closure (mesh-mediated traction, retention sutures, ABRA®) is associated with significantly higher rate of PFC [25-28]. Its role in wound dehiscence was best demonstrated by the recent work from Denmark reporting 80% delayed PFC rate in 18 cases after aortic surgery [6]. Unfortunately, the severity of the infection in our series required serial and aggressive debridement thus precluding the use of this technique. Probably, in such cases the use of ABRA® is more appropriate because elastomers are placed on 5 cm from the wound edge allowing for fascia sparing [28].

The most important issue remains how to prevent SSIs in high risk patients. Antibiotics alone cannot prevent SSIs and several preventative measures should be taken in consideration [29]. Antimicrobial Stewardship Programs are of great importance [29]. On other hand, a recent outstanding systematic review and metaanalysis clearly demonstrated the benefit of prophylactic use of singleuse NPWT (PICO®, Smith & Nephew) in closed incisions [30]. The authors reported overall relative reduction of SSIs with 58% for all procedures and with 56% for abdominal interventions. Moreover, they demonstrated a striking reduction of the dehiscence rate with over 26% and shorter lenght of stay with 5 days in the laparotomy subgroup. The recent international multidisciplinary consensus reccommends individual assessment of the risk and its use closed incision negative pressure therapy in high risk patients [13]. The most important limitation of the present study, except for the small sample size, is its observational design and lack of case matched controls.

Deep SSIs with fascial dehiscence are serious postoperative complication associated with eight-fold increase of the hospital costs and four-fold prolongation of hospital stay. Microbiological confirmation of the infection was achieved in 71% with 67% multidrug-resistance. E. coli and E. faecium were the most commonly isolated bacteria. The mainstay of the treatment remains the serial fascial debridement combined with open abdomen management in the cases with fascial dehiscence. Despite the promising results in severe trauma and diffuse peritonitis, NPWT in wound dehiscence yields rather unsatisfactory results due to fascial infection and significant co-morbidity and the dynamic fascial closure in these cases is highly recommendable.