The high level of resistance of yeast species of the genus Candida to antifungal agents used in the practice, defines the scientific interest to investigate the antifungal properties of newly synthesized hybrid materials. The research is directed to find a viable alternative for the treatment of infections caused by the highly resistant Candida species. The tested in the experiments nano-sized bimetallic polymer stabilized hibrid materials based on iron oxide and silver nanoparticles (γFe2O3/AgNps/PVA), were characterized by different techniques and for the first time tested onto six clinical Candida strains with a predetermined resistance to different antimycotics. The results showed the presence of very strong antifungal activity.

Species of the genus Candida are the fourth most causative agent of nosocomial bloodstream infections in USA as well as one of the most isolated microorganisms from hospital-acquired infections in Europe [1,2]. Nowadays a tendency for increasing of cases caused by non-albicans Candida species resistant toward one or more antifungal agents was observed. Among them C. glabrata demonstrated a high degree of resistance to fluconazole and voriconazole and enhance resistance to echinocandins [3-7]. C. glabrata is a fungus that unlike other fungi of the genus Candida is not polymorphic (i.e., does not form hyphae or pseudo hyphae) and exists only in the form of blastokonidium. In the beginning, this fungus has been classified to the genus Torulopsis, because it does not form hyphae and pseudo hyphae. However, later it has been decided that the formation of pseudo hyphae is not a reliable factor for distinguishing different types of fungi. Therefore, Torulopsis glabrata is affiliated to the genus Candida due to the fact that as other Candida strains it also infects the human organism [8]. The main future of C. glabrata among other representatives is the presence of haploid genome as well as its biochemical characteristics. For example, C. glabrata absorbs only glucose and trehalose in comparison to C. albicans that absorb a number of sugars [9].

Candida nivariensis was previously identified as Candida glabrata, but on the basis of genetic, culture and biochemical differences, it has been separated and described as a individual species in 2005 [10]. It possesses high resistance to many azole antifungals, including itraconazole, fluconazole, voriconazole. The considerable resistance to flucytosine is described as well [11]. C. krusei is an important causative agent of various infections in immunocompromised patients, fungemia, endophthalmitis, endocarditis, arthritis, and oropharyngeal and esophageal candidiasis [12]. A major problem in the treatment of infections caused by C. krusei represents the resistance to the fungicidal preparations. There are many reports in the literature, which described the mechanisms of development of resistance towards drug fluconazole [13-16]. Cases of resistance towards itraconazole and caspofungin were also described [17,18]. To overcome the problem of the growing resistance toward different type antimicrobials, hybrid materials containing different metal nanoparticles are the object of scientific research interest in order to investigate their activity towards microorganisms [19-21]. Their effect on the yeast is a challenge because of the eukaryotic cell type system of the strains. It is important to define the exact concentration at which they will exhibit their fungicidal activity without presence of cytotoxic effect on the human cells. The aim of the present investigation is to synthesize novel hybrid materials, which combine the properties of silver and iron based magnetic nanoparticles stabilized by polyvinyl alcohol with high antimicrobial activity and delivery targeting. For this purpose, it is necessary to examine and compare the presence of antifungal activity of the newly synthesized hybrid materials and to determine their minimal fungicidal concentration (MFC) for selected clinical yeast with a predetermined resistance to different antimycotics.

• Transmission electron microscopy (TEM) images were recorded on a HR STEM (JEOL JEM 2100). Samples were prepared by placing a drop of the precursor solutions on carbon-coated grids and dried under air at room temperature.

• Dynamic light scattering measurements (DLS) were performed on a NanoBrook 90 plus PALS instrument (Brookhaven Instruments Corporation), equipped with a 35 mW red diode laser (l ¼ 660 nm) at a scattering angle of 90.

• UV- Vis absorption spectra were recorded at room temperature in the wavelength range from 200 to 800 nm using Perkin Elmer spectrophotometer.

• IR spectra of the films were recorded in transmittance mode in the range from 400 to 4000 cm-1 using Perkin Elmer FTIR.

The synthesis of silver nanoparticles stabilized by PVA was performed as reported by Bryaskova et al. [19]. Briefly, five grams of PVA was dissolved in 95 mL deionized water under stirring at 80ºC. Silver nitrate (30 mg) dissolved in 5 mL (water) was added drop-wise under stirring to 95 mL of PVA solution (5%) thus achieving final concentration of silver nitrate in the solution equal to 300 mg/L. The prepared solution was heated for 1 h at 100°C in dark thus leading to the formation of silver nanoparticles (AgNps) stabilized via PVA. The color of the solution was light yellow.

Testing the fungicidal properties of the γFe2O3/AgNps/PVA hybrid materials

For evaluation of the fungicidal activity of the materials the Minimal Fungicidal Concentration (MFC) was determined. This was achieved by the method of macro dilution in a final volume of 1 ml. Materials P1 and P2 are tested initially from outgoing dilution 1:100 by two-fold serial dilutions up to 1:1600, but the MFC was not achieved. Therefore, the subsequent tests were started from a dilution of 1:1000 and two-fold dilutions are conducted up to 1:32000. The product P3 was tested without initial dilution as the subsequent two-fold dilutions were performed to 1:1024. As a diluent was used injection water. To each dilution of the material, standardized inoculum of the test strain containing 105-106 CFU/ml of the respective species of yeast was added. After incubation at 32.5 ± 2.5°C for 18-24 h, seeding was performed from each dilution by the surface agar method on plates with Sabouraud agar. The results are reported in advance at 24 hours, and final on the 5th day after incubation at 32.5 ± 2.5°C.

Then, Fe3O4 nanoparticles were synthesized applying wetchemical coprecipitation of ferrous and ferric ions in an aqueous solution upon addition of ammonium hydroxide. The stability of thus prepared iron nanoparticles is however critical and oxidation to more stable maghemite γFe2O3 was performed. The main problem of those naked magnetic nanoparticles is their ability to aggregate. To overcome this problem, γFe2O3 nanoparticles were coated with biocompatible and non-toxic PVA with included silver nanoparticles. Uncharged polymers such as PVA or PEO are known to adsorb nonspecifically on oxide surfaces. The interaction with the surface results from hydrogen bonding between polar functional groups of the polymer and hydroxylated and protonated surface sides of the oxide [25].

Two different γFe2O3/AgNps/PVA bimetallic hybrid materials were prepared: 1) hydrosol of γFe2O3 stabilized with AgNps/PVA, referred as P1 and 2) sediment of γFe2O3 stabilized with AgNp/PVA, referred as P2. The morphology and the size of thus prepared γFe2O3/ AgNps/PVA products were determined by TEM analysis. TEM images of the first product (P1) showed the presence of individual magnetic/silver nanoparticles with diameter ranging between 5-10 nm (Figure 2a). The same observation was made for the second product (P2), with the presence of individual magnetic/silver nanoparticles, which however tend to form aggregated clusters (Figure 2c). The selected area electron diffraction pattern (SAED) of γFe2O3/AgNps/ PVA materials indicates that they are nanocrystalline. The patterns of SAED are indexed as (200), (313), (317), (426), (513) and (517) reflections, which correspond to tetragonal crystal stucture of γFe2O3 with lattice constant: a=8.346, c=25.034 according to JCPDS (89- 5894) (Figure 2b, d). 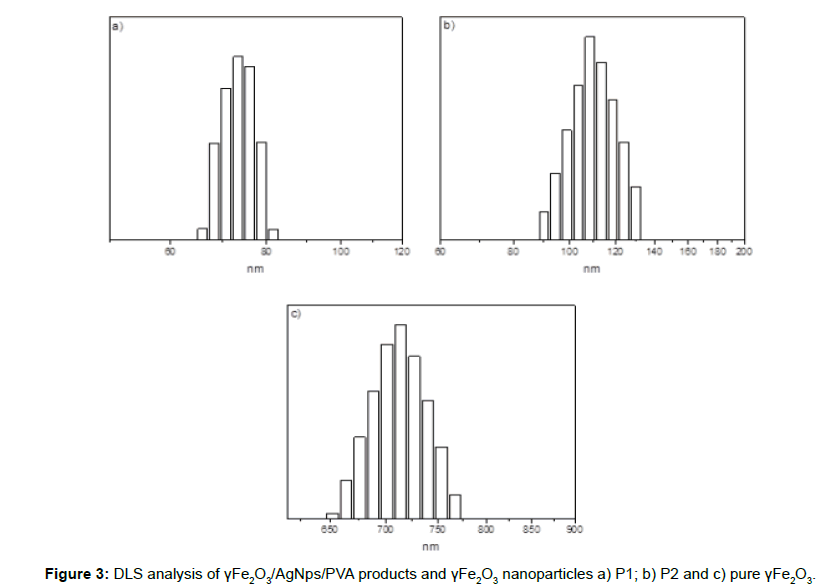 The observed difference between the hydrodynamic diameter and those observed by TEM is due to the formation of small clusters between particles in aqueous solution.

FTIR analysis of the synthesized γFe2O3/AgNps/PVA product (P2) showed the presence of all-characteristic for PVA signals at 3300 cm-1, which is due to the O-H vibrations of hydroxyl groups originated from the main PVA chain. The peaks at 1326 cm-1 are characteristic for the C-H deformation vibration in PVA and the absorption peak at 1000-1100 cm-1 can be assigned to the C-O stretching and O-H bending vibrations arising from the PVA chain. The presence of magnetic iron oxide nanoparticles can be seen by two strong absorption bands at around 634 and 566 cm−1 (Figure 4). 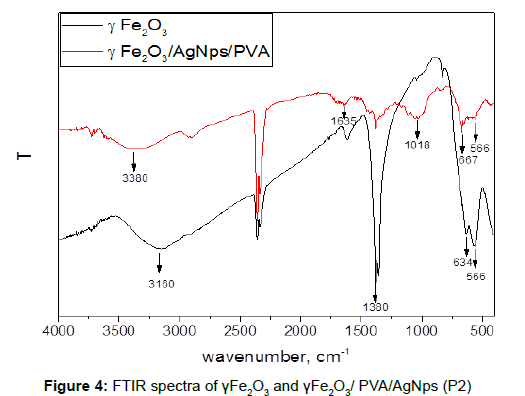 To test the fungicidal activity of thus prepared γFe2O3/ AgNps/ PVA bimetallic nanoparticles, six clinical strains with proven resistance toward one or more antimycotics were involved in the experiment as follow: C. krusei 112, C. krusei 8-48, C. krusei 8-126, C. glabrata 0-73, C. glabrata 8-122, and C. nivariensis. Their antimycotical resistance determined using commercial kit ATB Fungus 3 is shown in Table 1. The minimal fungicidal concentration (MFC) of the tested products towards six clinical Candida strains were determined by surface agar method and the results are shown in Table 2. The presence of fungicidal activity of all synthesized products (P1-P3) onto the tested clinical yeast strains was observed. As expected, taking into account the difference into the type of the yeasts, which belong to various Candida strains, difference in MFC of the products was established.

The MFC for the strain C. krusei 8-126 are significantly higher for the P1 and P2 in comparison to the MFC of other strains Candida. This is indicative for the higher resistance of the strains compared to all tested yeasts (Figure 6a). C. krusei demonstrated ability to grow in a medium with a lack of vitamins, temperature maximum of 43-45ºC, production of phospholipases and proteases, ability to attach to the surfaces of the host and formation of hyphae. It is established that C. krusei is attached easier towards inert substances, than to the epithelial cells of the buccal mucosa [12]. These specific characteristics of the strain probably determined the higher resistance of the tested strain. The lowest values for MFC were observed for C. nivariensis 383, which determined it as the most sensitive strain from all tested Candida strains (Figure 6b). The presence of antimicrobial activity of magnetic nanoparticles based on Fe0 or Fe3O4 is reported in the literature [27,28]. It is supposed that several oxido-reduction reactions take place that produce very reactive oxygen species because of Fenton reaction or Haber-Weiss cycle, thus iron in magnetite nanoparticles is fully oxidized to maghemite (γ-Fe2O3) via a series of reactions [27]. This causes oxidative stress to bacterial cells, and bacterial cell death, respectively. In contrast, fully oxidized maghemite is relatively stable in culture medium and do not generate significant cytotoxicity or genotoxicity in vitro due to the absence of electronic or ionic transfer [29,30].

The study is a part of the scope of the project Biomedicine and Molecular Bioscience COST Action BM 1309.