Fatal Disseminated Strongyloidiasis Secondary to Corticosteroid Use: A Report of Two Cases

Strongyloides stercoralis is an intestinal nematode endemic to tropical and subtropical locations, such as most of Latin America, and in the United States, the Appalachian mountain region. Clinical manifestations vary greatly and are non-specific; as a result, cases in regions that do not regularly screen for strongyloides often go undiagnosed. Current research estimates a prevalence of 370 million cases worldwide. Chronically infected patients that become immunosuppressed, particularly from exposure to corticosteroids, are at risk for developing a hyperinfection syndrome or disseminated strongyloidiasis, which carries a mortality rate of up to 87%. We present two cases of fatal disseminated strongyloidiasis. The first case is that of a 66 year old man, originally from Nicaragua, with ulcerative colitis receiving corticosteroids for three months that developed fatal disseminated strongyloidiasis which was complicated by gram-negative bacteremia, a complication associated with the highest mortality rates. The hospital course was additionally complicated by cytomegalovirus infection, Clostridium difficile colitis, severe gastrointestinal bleeding, disseminated intravascular coagulopathy, deep venous thromboses, pulmonary emboli, fungemia, bacterial meningitis, multifocal pneumonia with aspergillosis and toxic megacolon. The second case is that of an 87 year old man, originally from Cuba, with chronic obstructive pulmonary disease (COPD) and pulmonary fibrosis on corticosteroids for an unknown duration that developed fatal disseminated strongyloidiasis. The hospital course was complicated by respiratory failure, anemia and thrombocytopenia, atrial fibrillation with heart failure, acute renal failure, lactic acidosis, alveolar hemorrhage and Mycoplasma pneumoniae pneumonia. Both patients were originally from Latin American countries where strongyloides is endemic. Because chronic infections are typically asymptomatic, both were likely unaware they were infected. Furthermore, use of corticosteroids suppresses the eosinophilic response to infection, which is often the only clinical evidence that prompts clinicians to search for strongyloides. These cases highlight the importance of screening patients from endemic areas prior to initiation of immunosuppressive therapy.

Strongyloides stercoralis is an intestinal nematode endemic to tropical and subtropical locations, such as most of Latin America, and the Appalachian mountain regions of Tennessee, Kentucky and West Virginia [1,2]. Despite only being endemic to a small area of the United States, the ever-increasing numbers of immigrants from endemic countries, particularly Latin America, has resulted in S. stercoralis becoming one of the most prevalent , yet elusive, nematode infections. Clinical manifestations vary greatly and are non-specific; as a result, cases in regions that do not regularly screen for strongyloides can go undiagnosed. Furthermore, even infections identified in endemic regions often are not appropriately treated due to inadequate resources. Current research estimates a prevalence of 370 million cases worldwide, and while authorized immigrants undergo medical screening, only refugees are treated for a number of presumptive parasitic infections [3,4]. More so, there are millions of undocumented immigrants currently in the United States that bypassed all medical screening procedures [4]. Chronically infected patients that become immunosuppressed, particularly from exposure to corticosteroids, are at risk for developing a hyperinfection syndrome or disseminated strongyloidiasis, which carries a mortality rate of up to 87% [5].

The first case is that of a 66 year old man, originally from Nicaragua, with a history of ulcerative colitis for 11 years. Approximately two months prior to admission, he presented to the emergency department reporting 8 days of bloody diarrhea. He had completed a week of antibiotics without improvement in his symptoms. A CT abdomen showed acute pancolitis, he was admitted and started on IV steroids and empiric antibiotics. An infectious source for his symptoms was never isolated, therefore the antibiotic was stopped and he was discharged on tapered steroids and Lialda.

He returned multiple times over the course of 7 weeks with repeat episodes of watery diarrhea with occasional blood. After repeated admissions and treatment with tapering steroids, Rowasa enemas, Valtrex for CMV colitis, mesalamine for an Ulcerative Colitis flare, and oral vancomycin and intravenous Flagyl for Clostridium difficile colitis, he deteriorated and was taken to the OR for an emergent colectomy with ileostomy for early toxic megacolon. After surgery, he returned to the ICU in critical condition, intubated and requiring vasopressors. Pathology showed severe acute and chronic colitis with deep ulceration and yeast colonization.

In the days following surgery, he was septic with blood and urine cultures grew Klebsiella pneumonia, his stool was still positive for C. difficile, he developed respiratory failure and was unresponsive despite no longer being sedated. No cause for the encephalopathy was identifiable on a CT scan while an EEG showed diffuse moderate to severe cerebral dysfunction. Despite antibiotic coverage appropriate for all documented organisms, he continued to have intermittent fevers. Additional blood cultures grew Candida glabrata and appropriate therapy was started. Ten days following surgery, he remained completely unresponsive and he required transfusions due to anemia. Due to worsening respiratory failure, a CT chest was obtained which showed pulmonary emboli and bilateral consolidations. A bronchoscopy was performed and a BAL was collected. Aspergillus and organisms consistent with strongyloides larva were identified (Figure 1) and ivermectin was started. At autopsy, strongyloides was seen in the heart, lungs, ileostomy (Figure 2), esophagus, pancreas, adrenal glands, and brain. Additionally, CMV-infected cells were identified in the lungs, stomach, pancreas and brain and multiple foci of lung involvement by Aspergillus were also seen. 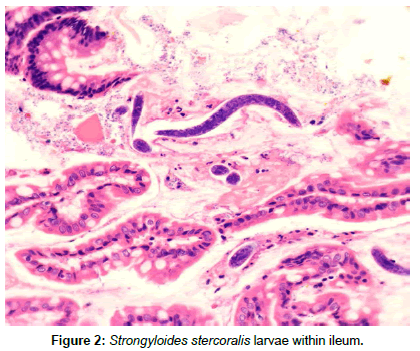 The second case is that of an 87 year old man, originally from Cuba, with COPD and pulmonary fibrosis who required corticosteroids to manage his symptoms. His medical history was also significant for hypertension, congestive heart failure, tricuspid regurgitation, atrial fibrillation, type 2 diabetes mellitus, peripheral vascular disease, stage 3 chronic kidney disease, hypothyroidism, gout, anemia and gastroesophageal reflux. He presented to the emergency room complaining of shortness of breath and cough. He was tachypneic with a low oxygen saturation of 60-70% on room air that improved with BiPAP; however his work of breathing remained increased. Additionally, he was in atrial fibrillation with rapid ventricular response, dehydrated with acute kidney injury, hypotensive requiring vasopressors, had leukocytosis and lactic acidosis. He was admitted to the ICU, intubated for continued increased work of breathing and started on broad spectrum antibiotics for presumed sepsis. CT findings were consistent with pneumonia, pulmonary edema and emphysema.

The following day, he underwent bronchoscopy and BAL. Mucus plugs were seen in the right and clotted blood in the left bronchial tree. The BAL showed organisms consistent with strongyloides the following day (Figure 3) and ivermectin therapy was started to treat disseminated strongyloides. The BAL cultures also eventually grew Cytomegalovirus and yeast. The yeast was felt to be a contaminant. He remained critically ill in septic shock. He developed thrombocytopenia and his anemia was worsening and therefore he required transfusion of multiple products. 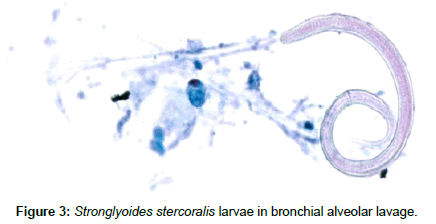 He continued to require high ventilator and vasopressor support and cultures from a BAL performed a week after admission grew Pseudomonas aeruginosa and Klebsiella pneumoniae. No strongyloides organisms were seen at this time. Even with maximum medical support, the patient continued to deteriorate with worsening thrombocytopenia and multi-organ failure. Eleven days after admission, the patient became hypotensive and expired.

At autopsy, strongyloides was seen in the lungs, large intestine and paraesophageal, paratracheal and hilar lymph nodes (Figure 4). Additionally esophageal Candidiasis was present. Strongyloidiasis results from infection with a nematode helminth that resides in the soil. Infective filariform larvae enter usually through the feet or legs, and then migrate typically to the intestine. Initial symptomatology is nonspecific with the most commonly reported symptoms being a serpiginous rash or abdominal complaints such as bloating; therefore most people that become infected are unaware. S. stercoralis is typically classified separately from other soil transmitted helminths because of a unique aspect of the life cycle, its propensity for autoinfection4. The typical parasitic life cycle takes the filariform larvae to the lungs to be coughed into the mouth and reintroduced into the intestine through swallowing. After molting, the now adult worms produce eggs that become the rhabditiform larvae shed in stool that subsequently mature in the soil and eventually produce again the infective filariform larvae. However, S. stercoralis is able to bypass its free living cycle in the soil with rhabditiform larvae molting within the intestine to become infective filariform larvae [5] (Figure 5). The autoinfection cycle can lead to chronic infections persisting for decades [5]. While the majority of chronic infections manifest with nonspecific gastrointestinal or pulmonary complaints, it is estimated that 1.5-2.5% of cases can progress to a hyperinfection syndrome under the appropriate circumstances [5]. Corticosteroids decrease the number of eosinophils by triggering apoptosis. Not only does this limit the body’s ability to mediate a parasitic infection and subsequently increase the risk of proliferation and potential dissemination, it also hinders a physician’s ability to identify strongyloidiasis as a cause of a patient’s symptoms. Often, the only indication of chronic infection is eosinophilia, a response which is suppressed by the use of corticosteroids. Furthermore, it is theorized that the use of corticosteroids increases ecdysteroid-like substances, especially within the intestinal wall. It is believed that these substances induce increased rates of molting into the autoinfective filariform larvae, thus providing another potential mediator of hyperinfection and/or dissemination [5].

Disseminated strongyloidiasis is a separate entity from hyperinfection, and is characterized by the spread of the organism to organ systems outside of the respiratory and gastrointestinal systems. Again, this condition is much more likely to develop in patients that are immunosuppressed, particularly from systemic corticosteroids. Disseminated cases carry mortality rates up to 87%, typically as a result of a secondary bacterial infection. Gram-negative bacteremia and meningitis are the most potentially fatal complications from disseminated cases. The blood is exposed to bacteria from the gastrointestinal tract that is carried on the larvae while migrating [5]. The patient presented in the first case developed gram-negative bacteremia and meningitis. The possibility of the same in the second patient cannot be excluded as he was taking antibiotics for a few days when repeat blood cultures were taken upon clinically worsening symptoms; he was also never able to have a successful lumbar puncture. While no inflammatory process was identified in the brain at the time of autopsy, he had been on ivermectin and multiple antibiotics for many days at that point.

As previously stated, the diagnosis of chronic strongyloidiasis is difficult since most patients are asymptomatic. Even after evolution into disseminated infection in both cases, the diagnosis of strongyloidiasis was not considered until the organisms were identified in cytologic or tissue specimens. A further potential diagnostic confounder in these cases is that the symptoms are non-specific and are therefore often attributed to other known or suspected diseases processes within the patient [5]. In the first case, the patient was experiencing multiple gastrointestinal symptoms, all of which were attributed to inflammatory bowel disease and related complications. The second patient presented with shortness of breath and pulmonary complaints, all of which were attributed to an exacerbation of COPD and pneumonia. Unless clinical suspicion is high, the diagnosis of strongyloidiasis will be missed.

While exact rates of strongylodies infections within immigrant populations in the United States is difficult to estimate and currently unknown, numerous sources report rates up to 46% in African and Asian refugee populations while conservative estimates for Latin American populations range from 5-10%. Due to restricted health care access for immigrants, many are not diagnosed and treated. Even if immigrants locate a clinic that provides care to underserved populations, the funding is simply not available to screen for parasitic infections [4]. Therefore, the prevalence of asymptomatic chronic strongyloidiasis is much higher than most medical providers within the United States would believe. For this reason, providers should have a high index of suspicion for chronic stronglyoidiasis in patients from endemic areas, including endemic regions within the United States. Finally, as evidenced by the two cases presented herein, disseminated infections carry a high mortality; therefore serious consideration should be given towards screening all patients at risk of harboring a chronic infection prior to immunosuppressive therapy, particularly with corticosteroids [2].