Genetic Analysis of Common Variants of MMPs and their Involvement in Rheumatoid Arthritis in the East Midlands, UK

Introduction: Rheumatoid arthritis (RA) affects around 1% of population and causes irreversible synovial joint damage and bone erosion. Matrix metalloproteinases (MMPs) play a role in pathologic processes; however their involvement in RA is not clear. This study investigated the association of MMP2, MMP7 and MMP9 with RA. Methods: DNA samples from European (103 controls, 125 patients) and South Asian (91 controls, 115 patients) populations were genotyped for MMP7 (rs11568818), MMP9 (rs17576) and MMP2 (rs2241145). Diplotype and triplotypes analyses were performed. Results: An individual is twice as likely to develop RA if they have an AG genotype at both the MMP9 and MMP7 loci in European (OR 2.2, CI 1.03-4.70) or South Asian population (OR 2.28, CI 1.00-5.20). A CG genotype at the MMP2 locus and AG at MMP9- 836 gives protection within a European population (OR 0.34, CI 0.17-0.70). Heterozygous genotype combination on all three loci in South Asians increases risk of RA by three times (OR 3.27, CI 1.04-10.20). South Asians showed a significant doubling of RA risk with a total genetic risk score of three or more. Conclusion: Our results show that polymorphisms at these three MMP loci impact RA susceptibility and have a synergetic effect.

Rheumatoid arthritis (RA) is an inflammatory autoimmune disease affecting around 1% of the world’s population, which causes considerable disability, morbidity and mortality, primarily due to irreversible synovial joint damage (via synovial fibroblasts), but it also affects the heart, lungs and eyes [1-4]. The severity of the disease ranges from mild joint swelling to severe polyarthritis, with progressive degeneration of cartilage and bone [5]. A mixture of genetic and environmental factors like gender, smoking, ethnicity and socioeconomic status contribute to RA pathology with heritability estimated at 60% [2,5,6]. The human leukocyte antigen (HLA) region accounts for around 30% of genetic variance in RA. However, other areas of the genome, in particular inflammatory pathways have become the focus of research, with many researchers focusing on inflammation and functional studies to understand degradation of synovial membranes and cartilage [6-11]. Synovial fibroblasts, a major cell type in RA inflammation, produce both extracellular matrix (ECM) components and a variety of matrix-degrading enzymes, which continuously remodel the ECM [12]. Arthritic joint destruction seen in RA is considered a consequence of accelerated ECM turnover [2]. Matrix metalloproteinases (MMPs) are involved in ECM remodeling and are synthesized in a tissue specific manner which is regulated by gene expression, thus the destruction of bone and cartilage in RA is a well regulated balance between activated MMPs and their inhibitors mediating the rate of ECM turnover [1,2,10]. Most MMPs are expressed at low concentrations in normal joints, but levels are increased in arthritic joints and RA synovial fibroblasts [1,11]. MMP7 is a matrilysin MMP which lacks the carboxyl terminal haemopexinlike domain found in other MMPs that normally restricts substrate specificity; therefore MMP7 is able to degrade a number of matrix proteins [6,10,11]. A substitution from A to G at the -181 position (rs11568818) has been shown to increase MMP7 gene expression [10]. MMP9 positively correlates with RA disease progression and severity [11]. It mediates destruction of connective tissue in diseased joints and has an association with cartilage degradation [11]. MMP9 levels in patients with active RA are higher than in healthy patients [3,10]. The MMP2 protein also has a role in cartilage degradation and inflammation [11]. MMP2 is expressed at a constant rate by most cells, including synovial fibroblasts but is overproduced in RA joints mediating articular cartilage degradation by both promoting angiogenesis and through direct cartilage matrix degradation [11,13]. Despite the potential and important role of the above MMPs in RA, genetic variations of the genes that regulate their expression have not been studied extensively. The effect of individual polymorphisms may be subtle and therefore a combination of these may have a greater association with the disease [14]. In this report we analyzed the genetic variation of three MMPs; MMP2 (rs2241145), MMP7 (rs11568818), MMP9 (rs17576) in two separate disease cohorts; European and South Asian from the East Midlands (UK) [15].

Allele frequencies, Hardy-Weinberg Equilibrium and odds ratios were calculated for each locus in each population. Diplotype and triplotype analyses were carried out to assess the synergetic effects. The diplotypes and triplotypes were used to analyze pain and severity scores. Pain and severity perceptions were both ranked on a scale of 1-4 where 1 = mild, 2 = moderate, 3 = severe and 4 = variable. Odds ratios for pain and severity were calculated using 2 as the threshold, where ≤ 2 is low and >2 is high. Using the risk alleles identified in the literature, risk scores were allocated to each patient and control (for rs11568818 and rs17576 AA = 0, AG = 1 and GG = 2; for rs2241145 GG = 0, CG = 1 and CC = 2); each individual had an overall risk score of 0-6. Average scores were used as the criteria for susceptibility (susceptible ≥ 3, normal <3) and odds ratios were calculated using these numbers.

The genotype numbers, allele frequencies, Hardy-Weinberg Equilibrium (HWE) and odds ratios for the individual loci were calculated and HWE was maintained for all loci in both populations (Table 1). The allele frequencies in this study were broadly comparable to those in the 1000 genomes project [18]. Although many odds ratios were above 1, none of them achieved statistical significance. We carried out synergetic effect analysis of different MMP genotype combinations (Table 2).

Table 2: Synergetic effect of 3 MMP loci on RA and RA related pain perception (Only significant results are given here).

We carried out genetic risk score analysis and results presented in Figure 1. Slight differences between patient and control groups were seen in both populations with the mode being a score of 3 in both patient groups, but only 2 in the control groups. South Asian GRS shows a significant doubling of risk with a total risk score of 3 or more (OR 1.92, CI 1.09-3.36). Although the trend is similar in Europeans, it does not attain statistical significance (OR 1.27, CI 0.64-2.52). 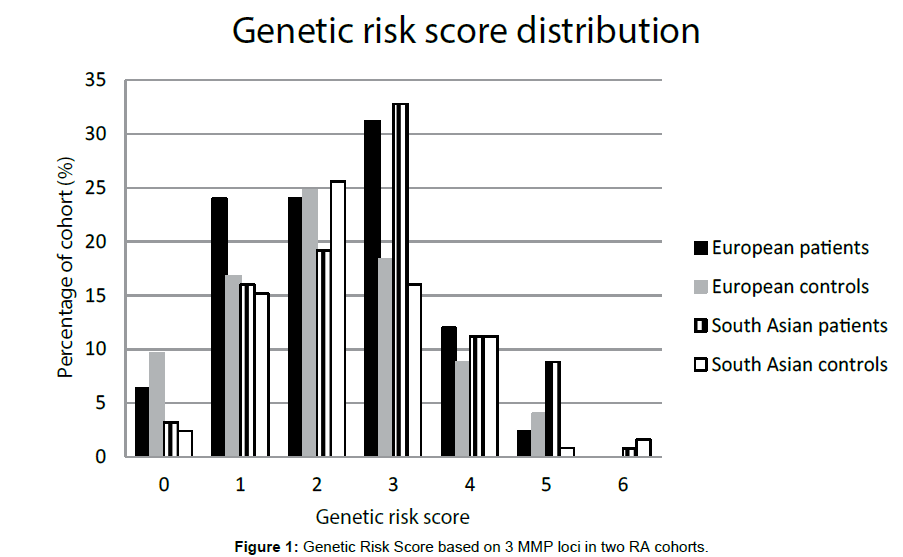 Studies on genetic analysis of MMPs in RA are limited; this is the first study that analyzed three loci in two distinct disease cohorts. Previous studies have shown that G allele at the -181 position on the MMP7 (rs11568818) gene increases gene expression which impacts on disease [10]. In this study the presence of at least one G allele increases the disease risk by 1.26 in Europeans (CI 0.71-2.26) and 1.42 in South Asians (CI 0.78-2.59). This is possibly due to the differential activity of the -181G allele which is 2 to 3-fold higher than the A allele [10]. Since MMP7 can digest a range of substrates that make up the ECM an increase in expression of the enzyme may cause an increase in joint degradation and damage [12,18]. There are no previous studies of MMP9 (rs17576) 836A/G polymorphism but the MMP9 enzyme has been found as a mediator of the connective tissue destruction present in RA joints [10]. The results from this study show an increase in risk of disease development with this polymorphism. The trend to increased disease risk suggests that a G allele may cause an increase in MMP9 protein expression which may subsequently lead to increased joint destruction and cartilage degradation [3,11]. The MMP2 (rs2241145) polymorphism has very little and non-significant effect in both populations (SA: ORs 1.01-1.14; E: ORs 1.21-1.80). It has been proposed that MMP2 plays a key role in RA, however the data from this study suggests no significant role these cohorts. This is in agreement with Chang et al. where no significant increase in MMP2 concentration was identified in RA patients suggesting that this polymorphism alone doesn’t effect MMP2 expression [12,13]. As the individual odds ratios failed to reach statistical significance it may be prudent to increase the sample size to more fully define the role of individual MMP polymorphisms in RA. Independently no single loci achieved statistical significance in increasing susceptibility of RA, but the diplotype and triplotype analyses suggested strong synergetic effects of MMP loci in RA development. All significant combinations include a heterozygous genotype at the MMP9 (rs17576) locus, suggesting that this locus has the greatest effect on RA. A unique point of this study is the genetic risk score (GRS). The GRS shows that disease risk is significantly doubled in South Asians with a risk score of three or more. The risk score could be produced in a variety of ways therefore this should be interpreted alongside the diplotype/triplotype analysis to determine where the main risks lie. A heterozygous combination on all three loci significantly triples disease risk in South Asians (OR 3.27, CI 1.04-10.20) but not in Europeans suggesting ethnicity may also play role in these associations. There are limitations in the literature about RA pain, which could be due to the nature of the variable as pain is normally self-reported. In our data, no genotype combination has a significant effect on joint pain in South Asian RAs; however some homozygous combinations reach significance in Europeans. The combination with the greatest effect on joint pain is AA at the MMP7 (rs11568818) and MMP9 (rs17576) loci and GG at MMP2 (rs2241145) which increases the risk of severe pain by 6.5 times (OR 6.5, CI 1.12-37.70), further reflecting the role of the homozygous genotype of these MMP loci on RA pain. Some previous studies have found MMP2 gene polymorphism can affect RA severity [12]. In this study the MMP2 (rs2241145) GG genotype is significantly associated with an increased disease severity in both populations. At MMP7 (rs11568818) and MMP9 (rs17576) no significant effects were observed in this study possibly due to small sample size though there is some literature which document their potential role in severity [6,10,11]. As these analyses were carried out on previously collected samples, it was not possible to study the disease progression and the role of MMP polymorphisms and proteins together; further comprehensive studies on larger cohorts are warranted to evaluate the role of MMPs in RA and potential diagnostic and therapeutic interventions.

Overall this study clearly documents potential synergetic effects of three MMPs loci in the RA occurrence and pain perceptions and these polymorphisms may have therapeutic potential. 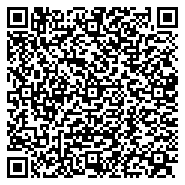