Roughly, in clinical practice, maxillary ITMS primarily shows a smooth surgical and postoperative course. On the other hand, the course for mandibular impacted third molars is generally demanding. Main reasons are well-known differences in anatomy and anatomic details between the upper and lower jaw as well as the fact that mandible, which holds the impacted third molars (ITM), is denser, thicker and stronger. A wide range of techniques for the lower ITMS are described in both academic books and scientific journals, in order to make this routine procedure easier for the patient and postoperative course less upsetting.

Minimally invasive approach to the lower ITM together with adequate preoperative and surgical management leads to the best possible outcome and satisfied patients. All these are small things that can make big improvements in everyday practice and will be described in this study. They suggest an option and reveal its apparent advantages.

In the period from July 2015 to August 2017, surgical extractions of 19 lower ITMs were performed on 18 patients at Dental/Medical Center of Maxillofacial Surgery ‘Aleja-Centar’, Banja Luka, Bosnia and Herzegovina. All patients were operated under local anesthesia. Surgeries were managed in an environment that provides an operating theatre in a supine position. In one case surgeon performed simultaneous removal of two lower molars on one patient while the remaining surgeries were single tooth extractions.

On the day of surgeries, all patients were in good medical condition and have undergone preoperative X rays as a OPT (ortopanthomogram) or retroalveolar X rays.

An important step before each surgery was conversation with patients where surgeon tried to explain the whole procedure step by step, and understand the patient’s expectations in the postoperative period.

Local anesthesia was applied in the region where the surgery was planned, and around the impacted tooth. The surgeon used articainehydrochloride with epinephrine 1/100000. Following that, corticosteroid (Dexamethason 4-8 mg) was administered locally in the area of surgery and 1 g. amoxicillin per os was given to the patients. The surgeon gently massaged the impacted area in order to reduce current numbness resulting from applied drugs and also to evenly spread corticosteroids through the local tissue.

Minimally invasive incision was an option for the lower ITMS. A classy Ward incision was slightly modified for this approach. The incision started in the buccal sulcus at the border of the middle and the posterior third of the second molar. Afterwards, it went upwards preserving the gingiva cervically around distobuccal angle of the second molar. Cervically, behind the tooth it went laterally following the buccal border of its posterior surface to the mucosa of the cheek (Figure 1a). The surgeon did not go with the incision in the cheek mucosa in order to avoid unnecessary bleeding during the operation and postoperative swelling. Depending on the clinical situation and the ITM position, additional space during surgery created mucosal coverlid in the posterior surface. The incision was placed from the preserved gingiva at distobuccal angle of the second molar across the posterior surface behind the second molar to its lateral lingual border (Figure 1b). Gingiva was preserved distally in the same fashion as it was distobuccally around of the second molar. This kind of approach with preserved gingival ring gave an opportunity to avoid possible complications as ‘pocket’ behind the second molar and gingival recession, when the incision lines goes adjacent to tooth (Figure 1). The tissue was dissected gently with sharp raspatory. Special attention was paid during the hook placement in order to avoid the unproductive retraction of the cheek, and edema in the postoperative period. Assistant hook was placed in close contact with the bone where assistant retracts jointly periost, muscle and mucosa. Rotary cutting high torque sterilizable hand piece was used for the bone overlying the surface around the impacted tooth. The overlying bone from the occlusal surface was removed where required, and after that from buccodistal aspect of impacted tooth with bur. In particular, special attention was paid when the bone was removed from the buccodistal side in order to provide the best possible setting for the elevator placement. The surgeon always tried to spare the lingual cortex of the mandible even in difficult cases (Figure 2). The tooth was delivered using an elevator and surgical clamps. In situations when the surgeon was not able to deliver the tooth in one piece, the tooth was sectioned in order to avoid the tissue trauma and pressure on the bone. Where necessary, after the tooth removal, haemostasis was controlled by using Surgical Ethicon. Postoperatively, using 5.0 resorbable sutures the wound was repaired in a reversed and single stiches fashion depending on the clinical situation (Figure 1b). 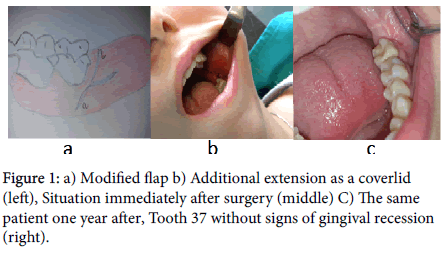 Figure 1: a) Modified flap b) Additional extension as a coverlid (left), Situation immediately after surgery (middle) C) The same patient one year after, Tooth 37 without signs of gingival recession (right). 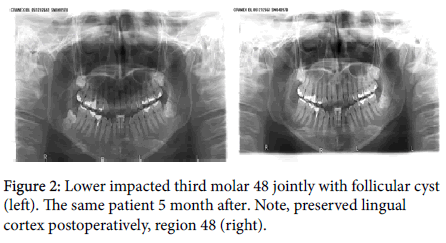 After the surgery, small damp gauze was placed directly over the wound, and an ice pack was applied to the area of the surgery in order to minimize the swelling. The patients stayed at the Clinic about 45 min after the surgery before they were discharged. Before they left, the gauze was removed and they took 1 tbl of ibuprofen 600 mg per os. They got additional instructions regarding the ice pack, diet, hygiene and analgesics. Antibiotics were not prescribed in the postoperative period.

The patients were seen 24 to 28 h and 48 to 52 h after the postoperative day (Figure 3). A minor, almost eye invisible edema was seen on the first postoperative day. On the second day, a slightly bigger edema appeared with some patients. Clinical examination and patients’ feedback did not show signs of infection or postoperative bleeding. 60% of the study group did not use analgesics in the postoperative period. 20% used one analgesic before sleeping on the day of the surgery, as a matter of precaution, but they did not feel the pain. The last 20% used analgesics during the first postoperative day since they felt the pain. On patient’s demands we removed the stiches in two cases after 7 days. Feedback from the patients was positive regarding the usual complaints associated with the lower ITMS such as pain, swelling, numbness, infection and prolonged recovery. Lower ITMS is a common procedure in oral & maxillofacial surgery around the world. By its nature, it often results in pain, swelling, trismus, bleeding, nerve dysfunction and postoperative infection [1].

However, if we glimpse behind, regardless of frequency and how common it is, patients’ first association with this kind of surgery is the same as above. Therefore, reducing the incidence of complications becomes imperative [2]. Most experienced clinicians combine objective data and perception to arrive at a logical treatment plan [3].

This article presents a group of patients with usual complaints caused by the lower ITM, prejudice and fears regarding the procedure, and management of a private medical practice in order to get the best possible outcome and satisfied patients in everyday practice.

Application of local anesthesia with epinephrine around the impacted molar provided a generally bloodless operating field. Principally, it was used for local analgesia. An important factor in the use of vasonostrictors to control intraoperative bleeding is infiltration near or in the surgical site [5].

Afterwards, dexamethasone was injected submucosally. This is a small thing, which certainly helped in the postoperative period as there were no severe signs of swelling. Injected in a dosage of 4 to 8 mg submucosally prior to the surgery, it helped significantly to reduce the swelling [6]. Administration of the corticosteroid before the ITMS improved the postoperative experience of patients and had a significant impact on trismus and inflammation [7].

Prior to the surgery the patients were given 1 g of amoxicillin or 600 mg of clindamycin in cases of allergy to penicillin. Since there was no infection in the postoperative period this had a dual impact on the patients, it had some sort of ‘placebo effect’ on them, i.e. they are protected with antibiotics and the surgeon knew what he was doing since he did not prescribe antibiotics postoperatively. This kind of protocol is required to adequately select patients. In this study there was one patient with severe sings of trismus and infection before surgery, in the region of the impacted third molar (38). So, the antibiotics were administrated 3 days before the surgery, on the day of the surgery and on the first postoperative day. A single dose of penicillin or its derivate given before the surgery were effective in reducing the frequencies of alveolar osteitis and the wound infection after the third molar surgery [8]. Antibiotic prescriptions are unnecessary after the lower third molar removal when preoperative infections are absent [1].

Sterile condition of the operating theater as well as the supine position of the patients during the surgery certainly relaxed them and contributed to the positive outcome in the postoperative period.

Minimally invasive approach was used for the lower ITM (previously described in detail) with a modified classy Ward incision. Advantages of this modified incision as a minimally invasive were to decrease the amount of surgical trauma, postoperative swelling, preserve gingiva around the second molar, reduce gingival recession, and ensure a minimal damage of the biological tissue. Furthermore, it significantly decreases the possibility for creation of a distal pocket and usually results in minor infection and quicker recovery time. In cases when slightly wider exposure of working area was needed additional extension on posterior surface created a coverlid behind the second molar. Thanks to it, the surgeon did not need to extend his flap in the area of the buccal mucosa, which gave him an option to avoid unnecessary bleeding and postoperative swelling. The factors which affect the occurrence of pain and swelling include the skill of the surgeon, the extent of the surgical trauma, suturing, age, sex, medication, and the local flap design [9]. A smaller operating field is certainly the main disadvantage of this technique, so it is not recommended for a novice surgeon in the field of the lower ITMS (unless practiced). Also, it is not recommended in cases when horizontally impacted third molar with occlusal surface is immediately adjacent to the root of the second molar, and when the second molar shows distal angulation. Gentle manipulations with the tissue, particularly with hooks are helpful in reduction of the postoperative edema.

After the surgery, the wound was repaired with 5.0 resorbable sutures, and reversed stiches were put in when and where the surgeon decided.

600 mg per os ibuprofen was given after the surgery in order to reduce the postoperative pain. In this study this had a positive effect on the patients. Together with adequate preoperative and surgical management, it has significantly decreased the pain and inflammation in the postoperative period. An extensive retrospective analysis of the randomized clinical trials over the last 40 years demonstrated that ibuprofen is effective in moderate to severe postoperative pain [10].

Ice pack was applied immediately after the surgery and in the following 12 h in the area of surgery. It helped the patients to reduce the pain and postoperative swelling. However, its role is still the subject of clinical studies regarding the ITMS.

Considering the results it can be said that the treatment plan delivered a positive outcome.

Lastly, in the field of the lower ITMS, modified incision as a minimally invasive approach together with the preoperative and surgical management described in this article, significantly decreased the postoperative symptoms usually associated with this type of surgery. 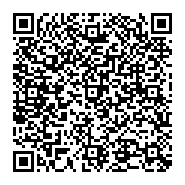