Genetic performance for a quantitative trait is often controlled by gene-by-gene and genotype-by-environment (GE) interaction effects. As an important component, a GE interaction effect is highly related to crop stability. As genetic association mapping has been widely used to determine markers associated with traits of interest, stability analysis based on genetic markers/genes of importance could help develop widely adapted or specifically adapted cultivars. With linear mixed model approach, in this study we analyzed a wheat data set from the USDA Hard Winter Wheat Regional Nursery Program in 2010. The data included 32 genetic markers and 48 genotypes with three important agronomic traits: grain yield, plant height, and heading date, which were measured under multi-environments. Our results showed that four important DNA markers: Rht2, PPO18NED, Lr34JagTM, and Waxy-A1-AFC-AR2FAM, were significantly associated with all these three traits. Among these, Rht2 contributed 50.34%, 78.65%, and 53.90% of the phenotypic variation for grain yield, plant height, and heading date, respectively. Compared to their main effects, however, genotype-by-environment interaction effects were less important under these diverse environments.

Wheat, as an important source of protein, vitamins and minerals [1], is a major consumed food crop around the world. The world production of wheat in 2012 was 670 million metric tons, making it the second most-produced cereal after rice (719 million metric tons) [2]. Wheat feeds 4.5 billion people in 95 developing countries [3]. As the population continues to increase, genetic improvement in wheat yield, quality, and resistance is more urgent to meet such a great need.

The Hard Winter Wheat Regional Nursery (HWWRN) Program, coordinated by U.S. Department of Agriculture - Agricultural Research Service (USDA-ARS), aims to evaluate various advanced breeding lines and commercial winter wheat cultivars in multi-state environments. More importantly, these winter wheat genotypes have been genotyped with various DNA markers with potentially known gene functions. For example, the major dwarfing genes like Rht1 andRht2, which could reduce plant height by reducing the response to gibberellin with pleiotropic effects on grain number and yield [43,44] were used to genotype 48 winter wheat lines in 2010. Various DNA markers linked to important genes in hard winter wheat were reviewed in a recent publication [45]. Such resources could provide a great opportunity for both yield stability analysis for each winter wheat cultivar, but also for determination of DNA marker associations with traits of interest under a wide range of growing environments. Appropriate genetic data analysis should provide useful genetic information to determine appropriate winter wheat cultivars. With such wheat data under multi-environments, various genetic models can be employed to reveal rich genetic information that can be used for winter wheat line selection.

In this study, we focused on analysis of HWWRN data collected by 20 institutes in 2010. The data included three important agronomic traits: grain yield, plant height, and heading date measured under diverse environments and 32 genetic markers for 48 winter wheat cultivars. First we used a one-way ANOVA model to determine each of these DNA markers associated with traits of interest under different environments. Secondly, we applied a linear mixed model approach to investigate the contributions of several these markers associated with these three agronomic traits across environments. The main objective of this study was to determine the stability of these gene expressions under various environments and provide information to select superior genotypes with stable performance.

The nursery program includes the Southern Regional Performance Nursery (SRPN), the Northern Regional Performance Nursery (NRPN) and the Regional Germplasm Observation Nursery (RGON). The winter wheat phenotypic and genotypic data were downloaded from the Hard Winter Wheat Regional Nursery Program of U.S. Department of Agriculture, which conducted by 20 institutions in 2010. We only used the phenotypic and genotypic data from SRPN in this study. Three agronomic traits, grain yield, plant height, and heading date, were available in 30, 18 and 13 environments (Table 1) and were used in this study. Forty-eight winter wheat lines were screened with 38 genes/markers. Six markers were removed due to due their monomorphism and nine genotypes were removed from the data set due to missing markers. Therefore, the data used in this study contained 39 genotypes and 32 DNA polymorphic genes markers (10 dominant and 22 co-dominants) (Table 2).

†: X indicates a trait being measured under that environment

Due to the winter wheat data structure, several different models such as stability analysis and gene expression analysis under different environments can be used for analyzing multi-environmental data. In this study, we emphasized two genetic models. The first genetic model is described as follows.

For a particular marker, there could be all homozygous and heterozygous combinations like AA, BB and or AB among 48 cultivars. Therefore, the model 1 actually is a one-way ANOVA model for each marker, where g could be different for different markers:

where yij is the phenotypic value for the marker with genotype i; ni is the total number of for genotype i; and

is a random error.

On the other hand, gene expression for each of these traits under these environments could be controlled by genotype-by-environment (GE) interaction. Investigation of GE interactions at DNA marker level is helpful to select cultivars adapted to diverse environments with specific markers. Therefore, we also analyzed each marker including its GE interactions with the following linear mixed model.

With model (1), an analysis of variance (ANOVA) method was employed and adjusted coefficient of determination (R2) was estimated for each DNA marker under each environment. For model (2), a minimum norm quadratic unbiased estimation (MINQUE) was applied to estimate all variance components with 10-fold jackknife technique applied [46-48]. All data analyses were implemented by R computer language (Version 3.0.1) [49] and with an R package “minque’ [46].

First, each marker under each environment was analyzed separately with model (1). The corresponding contribution (represented by an adjusted coefficient of determination, defined as R2) to the phenotypic variation for each of three agronomic traits was estimated. The results are provided in Figure 1. 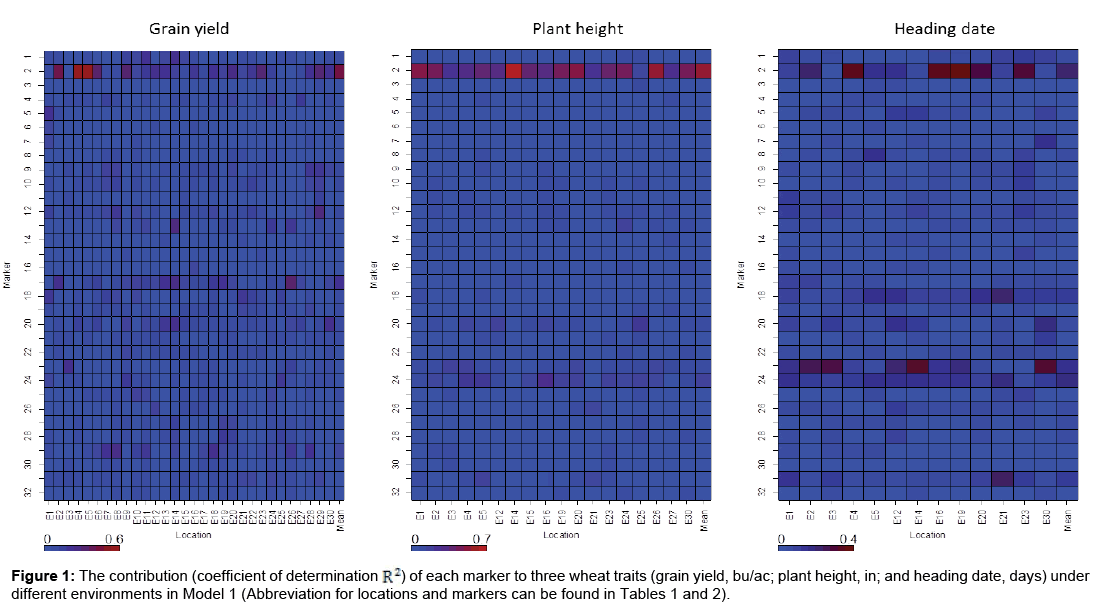 Figure 1: The contribution (coefficient of determination R2) of each marker to three wheat traits (grain yield, bu/ac; plant height, in; and heading date, days) under different environments in Model 1 (Abbreviation for locations and markers can be found in Tables 1 and 2).

In this study, two different models were employed to identify desirable DNA markers with high performance stability in winter wheat cultivars. The first model was a single marker model under each environment and the second one with GE effects included. The results obtained by both methods were comparable. Markers with major contributions to these three traits were identified by both models; however, GE interactions for these markers under these diverse environments were very small (Figure 1 and Table 3). DNA marker Rht1 on the short arm of chromosome 4B [54] was significantly detected for all three traits. This DNA marker was reported to be associated with plant anatomy and morphology [55,56]. Rht1 was also reported to be associated with Septoria tritici blotch [57]. It seems that Rht1 shows pleiotropic effects [58-61]. We also detected that the DNA marker VRN-D3-F6R8NED was highly associated with heading date [51]. The marker VRN-D3-F6R8NED is a vernalization gene, which controls heading date [51]. With the application of linear mixed model-based association mapping, in addition to DNA marker Rht1, DNA markers PPO18NED is associated with grain yield [62], Lr34JagTM is a wheat leaf rust resistance gene and was reported to be associated with plant growth and grain yield in Barley [63,64]. We found the similar result that this marker was significantly associated with plant height. Waxy-A1-AFC-AR2FAM, a co-dominant marker located on chromosome 8AS, was significantly associated with for heading date. Our results showed that the expression levels of the DNA marker Rht1 varied among different environments by single marker model and were confirmed by Model 2 as well.