The worldwide antibiotics market was valued at USD 42,653.89 million in 2018, and is estimated to be valued at USD 56,369.92 million in 2024, witnessing a CAGR of 4.7%. Some factors that are driving the market growth include the emergence of anti-MRSA drugs, development of generic drugs, and vulnerable aging population.

A company that initially produced the patented drug tries to generate utmost revenue before the patent expires. Once the patent expires, there will be several competitors who begin manufacturing the generic formulations. They have the same composition and same pharmacological activities as of the original drug. Almost 80% of the prescription antibiotics are generic. As a result of this, the price is reduced. Many people can afford drugs, thus, resulting in improved healthcare outcomes. However, using indiscriminate drug also leads to drug resistance and other complications. 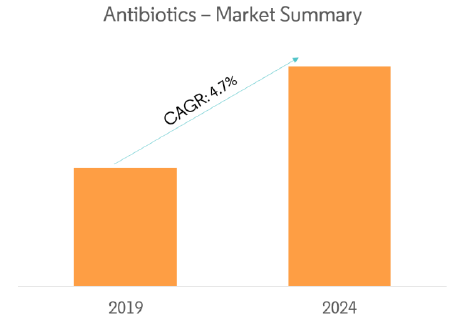 The rising threat of drug resistance and a weak pipeline of new molecules are leading to the development of combinational formulations. For instance, in countries, like India, the emergence of multi-drug-resistant tuberculosis (TB) is a major factor driving the R&D expenditures. Methicillin-resistant Staphylococcus aureus (MRSA) is another bacterium responsible for several infections in humans that are difficult to treat. The MRSA infection is difficult to treat with standard antibiotics, such as penicillins (methicillin, dicloxacillin, nafcillin, and oxacillin), and the cephalosporins. In 2014, the US Food and Drug Administration (FDA) approved four new antibiotics for the treatment of infections caused by gram-positive bacteria, including MRSA.

North America currently dominates the market for antibiotics and is expected to continue its stronghold for a few more years. This region is expected to increase its market share in the future, owing to the increased adoption of antibiotics. The United States holds the majority of the market in the North American region, due to the fact that the United States has the highest antibiotic prescribing rate in the North American region. In addition, there is a rise in per capita health expenditure in the country, which is expected to increase over the forecast period, owing to decrease in the unemployment rate.

Antibiotic is an antimicrobial substance, which combats bacterial infections and occasionally protozoan infections. In addition, they are used to cure several diseases such as strep throat, urinary tract infections, sinus infections, pneumonia, skin infections, ear infections, and others. There are numerous ways of classifying antibiotics; however, the most common classification is based on their chemical structures, spectrum of activity, and mode of action. Currently, the demand for beta lactam and beta lactamase inhibitors class of antibiotics is high among healthcare providers. The global antibiotics market generated $42,335 million in 2017, and is projected to reach $50,374 million by 2025, growing at a CAGR of 2.1% from 2018 to 2025.

The antibiotics market is highly competitive and consists of several major players. In terms of market share, few of the major players currently dominate the market. However, with technological advancements and product innovations, mid-size to smaller companies are increasing their market presence, by introducing new products with less prices. Companies, like Glaxosmithkline, Pfizer PLC, Bayer AG, Novartis AG, and Abbott Inc., hold significant market shares in the antibiotics market.

The growth of the global antibiotics market is increasing due to increased consumption of antibiotics in low & middle-income countries, major investments in R&D activities by pharmaceutical companies, and rise in prevalence of infectious diseases. However, development of antibiotic resistance and increase in drug approval costs are projected to impede the market growth. On the contrary, discovery of advanced prospect molecules and introduction of novel combination therapies to treat antibiotic-resistant microbial infections are expected to offer remunerative opportunities for market players. 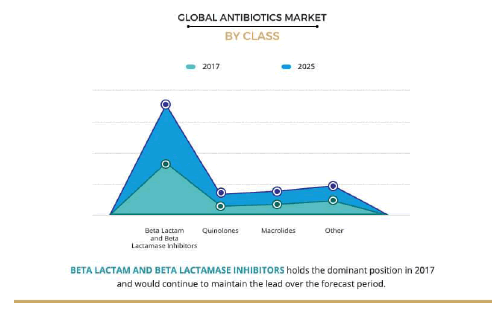 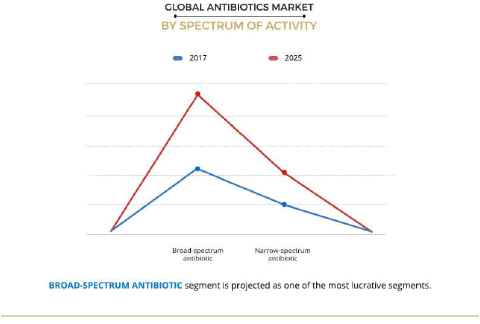 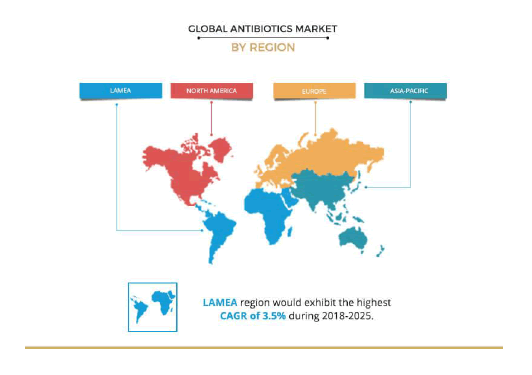 Region wise, the antibiotics market is analyzed across North America, Europe, Asia-Pacific, and LAMEA. Asia-Pacific dominated the market in 2017, accounting for the highest share, and is anticipated to maintain this trend throughout the forecast period. This is attributed to increased consumption of antibiotics, their easy availability, and rise in sale of over-the-counter drugs.

• This report provides a detailed quantitative analysis of the current market trends and future estimations from 2018 to 2025, which assists to identify the prevailing market opportunities.

• An in-depth analysis of various regions is anticipated to provide a detailed understanding of the current trends to enable stakeholders formulate region-specific plans.

• A comprehensive analysis of the factors that drive and restrain the growth of the global antibiotics market is provided.

• An extensive analysis of various regions provides insights that are expected to allow companies to strategically plan their business moves. 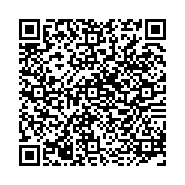