Objectives: Medical treatments may be inadequate for the management of allergic rhinitis. Therefore, it requires different treatment options. We aimed to evaluate the effects of nasal steroid and hyperbaric oxygen (HBO) treatments on the nasal mucosa of an allergic rhinitis of a (AR) rat model.

Conclusion: Anti-inflammatory effects of both nasal steroid and HBO treatments were found to be similar in our study. Nasal steroid therapy combined with HBO therapy may be used on treatmentresistant patients with persistent AR.

Allergic rhinitis (AR) is the most common chronic immunological disease experienced by humans. AR has physical, social and psychological effects on quality of life. Recent studies have reported the roles of some mediators in the development of nasal allergy. Histamine, the major chemical mediator, leukotrienes, plateletactivating factor, prostaglandins and substance P are some of these mediators [1]. Nasal mucosa also contains many inflammatory cells that may contribute cytokines which trigger an allergic response. Sinonasal mucosal inflammation, eosinophilia, edema and increased mucus production play a key role in the pathophysiology of AR. European ENT specialists use “The Allergic Rhinitis and its Impact on Asthma (ARIA)” guideline for the treatment of allergy. Persistent allergic rhinitis is defined by the persistence of symptoms for more than 4 days per week and more than 4 weeks per year [2].

Hyperbaric oxygen (HBO) therapy has been used successfully in humans to treat various diseases. The patients are kept in a hyperbaric chamber, where 100% oxygen is delivered to the patient at pressures 2-3 times higher than sea level atmospheric pressure, and the increased pressure is intended to increase the amount of dissolved oxygen in the plasma of patients [3]. Recent studies have shown that high concentrations of oxygen might be immunosuppressive in animals. Hansbrough et al. [4] have shown the decrease in circulating levels of total leukocytes and lymphocytes. Several studies performed with specimens of brain and muscles or flaps have demonstrated the decreased leukocyte adhesion with using hyperbaric oxygen [5-7]. Fibroblast proliferation is similarly affected by the oxygen concentration [8].

The present study had the approval of the ethics committee and complied with the guidelines for the care and use of experimental animals (2014/36). The study conformed to all regulations of the Helsinki Declaration on experimental studies.

A total of 30 healthy adult male Albino-Wistar rats each weighing 250-270 gr obtained from Department of Biology and Biomedical Application Techniques of Experimental Animals were included in the study. Since menstrual cycle can affect the hormonal changes of the nasal mucosa in female rats, male rats were used in our study. Before HBO treatment, the rats were taken to the Department of Underwater and Hyperbaric Medicine and kept at an appropriate temperature and humidity for 48 hours, then at 22 ± 2°C and 65-70% humidity and ad libitum conditions in a 12-hour light-dark cycle in an experimental room.

Sensitization to TDI was achieved by the method described by Kitamura et al. [10] 10 ml of a 10% solution of TDI (Merck Millipore®, Darmstadt, Germany) in ethyl acetate was painted bilaterally on the nasal vestibule once a day for five consecutive days. Following an interval of 2 days, sensitization procedure was repeated. After an interval of 1-week, solution of 10% TDI was applied to the nasal vestibule to provoke nasal allergy-like symptoms in the TDIsensitized rats (for provocation).

The HBO treatment was administered in a small hyperbaric cabin that was designed for small animals with the capacity for 10 rats. Before the start of the HBO sessions, the hyperbaric cabin was ventilated with oxygen for 10 minutes to maintain 100% oxygen concentration within the cabin. The group of rats exposed to HBO underwent 30 sessions of HBO therapy at 2.5 ATA (1-atmosphere absolute-ATA) for 90 minutes including decompression and compression per session six days in a week. HBO treatment was started on the fifth day of sensitization and applied for 35 days in Group 3. At the end of the HBO therapy which lasted for 30 days, the rats were sacrificed after being anesthetized with ketamine hydrochloride (100 mg/kg, IP; Ketalar®, Eczacibasi Parke-Davis, Istanbul, Turkey) and Xylazine hydrochloride (10 mg/kg, IP; Alfazyne®, Alfasan International B.V., Woerden, The Netherlands).

After the scarification, the rat heads were dissected along the nasal septum to expose the nasal cavity and the maxillary sinus. The mucosa of maxillary sinus and turbinates was carefully dissected from the bone. These mucosal specimens were fıxed in 10% formaldehyde solution in order of which was only known by the director of the study. Specimens were evaluated by a pathologist who was blinded to the allocation of the groups. Specimens were prepared as follows: after fixation in 10% neutral formalin, they were decalcified. Following routine paraffin processing, 5 μm sections were taken and stained with hematoxylin - eosin. The sections were then evaluated semi-quantitatively, using an Olympus BH-52 light microscope, and parameters of histopathological inflammation, fibrosis and eosinophilia were assessed. Fibrosis was classified based on fibroblastic cell count. Average of fibroblastic cell counts were calculated after examination of three different high-power fields under a light microscope. Fibroblastic cell count was scored as follows: 1-3 fibroblasts (+), 4-6 fibroblasts (++), 7-10 fibroblasts (+++), and >10 (++++). The degree of inflammation was categorized according to the intensity of the inflammation, and the number of inflammatory cells. Inflammatory activity was indicated as follows: (+) inflammatory cells dispersed as single cells (+) or clusters (++) throughout the stroma; (+++): inflammatory cells infiltrating the epithelium (Table 1) [11]. Average of eosinophil counts was calculated after examination of three different high-power fields under a light microscope.

Table 1: The distribution of inflammation and fibrosis scores in groups. 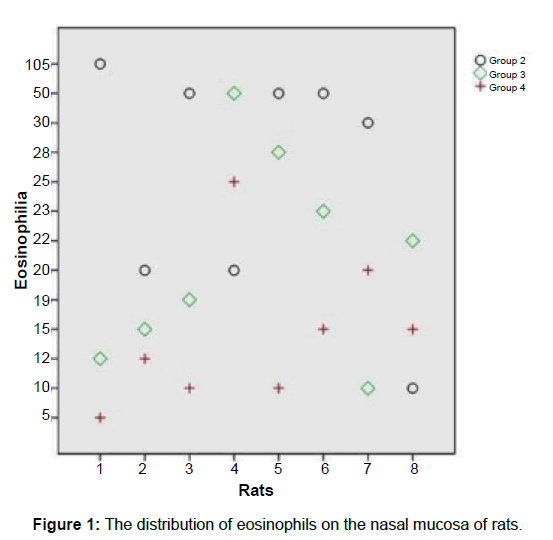 Figure 1: The distribution of eosinophils on the nasal mucosa of rats. Figure 3: The nasal mucosa of the fourth group (Hematoxylin & eosin, x100). The underepithelial area was infiltrated sparse lymphocytes and edematous.

Some important functions are achieved by the nose and nasal cavities. The nasal cavity and mucosa humidify the air before it enters into the lungs. Nasal mucosal inflammation, edema, and increased mucus production occur in allergic rhinitis. Genetic predisposition to allergies leads to the development of AR. Repeated exposures to allergens lead to activation and maturation of B cells to plasma cells producing specific IgE antibodies. The basophils and mast cells introduce specific receptors to IgE. The activated mast cells release the preformed histamine and produce new mediators. Symptoms such as rhinorrhea, blockage, sneezing, and itching can occur in patients with AR.

Treatment options that were offered by the guideline have been shown to improve disease control [12]. ARIA includes qualityof- life measures to be used in the evaluation and treatment of AR and provides an evidence-based approach to the treatment of AR. The guideline has recently been updated using GRADE (Grading of Recommendations, Assessment, Development, and Evaluations) methodology [2,13]. Oral antihistamines, decongestants are often used to treat the patients with AR. However, patients with chronic symptoms can use an intranasal steroid spray regularly. Intranasal topical steroids are found to be effective in AR. Glucocorticoids show clinical efficacy with their ability to reduce eosinophil infiltration into the airway, viability and activation of inflammatory cells [14]. The other indications for intranasal steroids include acute rhinosinusitis, chronic rhinosinusitis with or without nasal polyps, postoperative treatment of nasal polyps and/or chronic rhinosinusitis and AR [15]. Systemic bioavailability of intranasal steroids depends on the type of steroid used. Steroids have some side effects on growth, eyes, bone and the hypothalamic- pituitary- adrenal axis. Steroids such as mometasone furoate and fluticasone furoate have low systemic bioavailability. Thus, these intranasal steroids are considered safer than the others [15]. Hyperbaric oxygen therapy provides 100% oxygen for inhalation at greater than one atmosphere absolute (ATA) in a chamber. HBO therapy increases the oxygen content of plasma. Some of the studies have reported that HBO treatment leads to changes in respiratory tracts. Long-term HBO therapy caused mild inflammation on the nasal mucosa [11,16]. Several cell-mediated reactions were suppressed, including allergic encephalomyelitis [17]. Recent studies have reported that HBO also has potent antiinflammatory effects [18,19]. Recent studies have shown that with HBO therapy tissue edema and histopathological changes occur and also levels of IL-6, IL-1 and TNF-alpha decrease [20].

Edema is an abnormal accumulation of fluid in the intersticium as a result of changes in hydrostatic and oncotic pressures. Cellular activity in the inflamed tissue is more intense relative to normal tissue. Glucocorticoids reduce airway eosinophil infiltration, viability, and activation of inflammatory cells. Hansbrough et al. [4] have shown that hyperbaric treatment increases endogenous glucocorticoid levels. HBO therapy may supply too much adenosine triphosphate for cellular activation. HBO therapy can increase the amount of oxygen in tissue and blood with resultant reduction of vascular permeability [17].

The English in this document has been checked by at least two professional editors, both native speakers of English.