Ectopic thyroid can be described as functional thyroid tissue that’s located anywhere other than in the anatomical position. The development of thyroid gland typically takes place during migration of the primitive forgegut to the pretracheal region. Ectopic thyroid tissue typically located in the thyroid gland decent but rarely can be seen in the mediastinum, heart diaphragm, and esophagus [1].

A 6-year-old male with anterior cervical mass was admitted in our hospital on 31 May 2017 which he stated having 5 years small mass like peanut, five years ago, no were mass in the median anterior neck (Figure 1). At that time, there was no complaining of fever, swelling, tenderness, difficulty in breathing, coughing while drinking water and hoarseness. The mass gradually enlarged with a diameter of about 2.0 cm. The patient had normal sleep and urine. After hospitalization, the patient was 115.3 213 in height and 19 kg in weight. The anterior median hyoid bone of the neck touched a mass about 2.0 cm in diameter, which was soft and smooth. The trachea moved up and down with swallowing, and the trachea was in the middle. The thyroid area did not touch the enlarged lymph nodes. 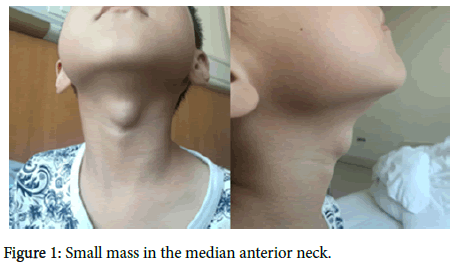 After evaluating the patient’s condition, thyroglossal duct cyst was initially diagnosed and surgical removal of neck mass was planned the next day after admission. Preoperative ultrasonography showed a solid mass at the hyoid level, 2.3 × 1.1 cm, with clear boundary and regular shape. There were many cystic structures, the larger was 0.26 × 0.17 cm, with clear boundary and strong echoes in most of the inner walls, and arteriovenous blood flow signals could be detected. No typical thyroid parenchyma was found in the thyroid area (Figure 2) [3]. Combined with ultrasonography, the cervical tumors were highly suspected to be ectopic thyroid, and the surgical plan was immediately discontinued. 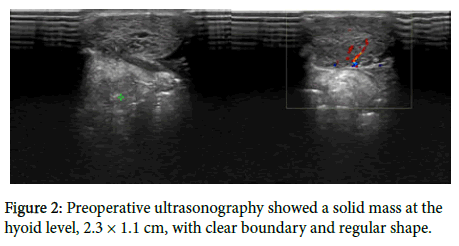 Parallel CT examination showed that thyroid artifacts were not clear enough, and multiple high-density shadows were seen in the floor of mouth and in front of neck. The larger one was located in front of neck and its diameter was about 2.1 cm (Figure 3). 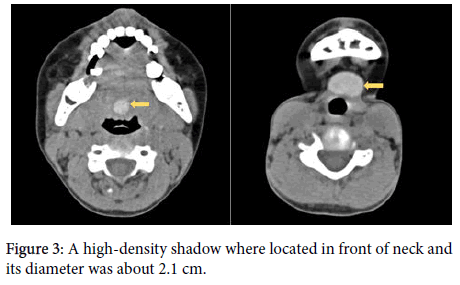 Figure 3: A high-density shadow where located in front of neck and its diameter was about 2.1 cm.

Thyroid function and parathyroid hormones were measured by blood sampling: FT3 5.49 pmol/l, FT4 11.78 pmol/l, TSH 13.175_u/ml, TG 207.30_ng/ml, parathyroid hormone 24.32 pg/ml. after diagnosed with ectopic thyroid patient was discharge and start treatment, we start medication of 12.5 UG of euthyrox medication QD was given, and regular review of blood hormonal level was conducted to adjust the dosage of the drug, and we discharged, the patients from the hospital. After 2 months, of regular checkup the TSH was still high, and we increased the dosage of Euphorbia we give 25 UG qd. After 6 months of treatment, TSH returned to normal and the anterior cervical mass shrank slightly. After we find the TSH slightly decrease we reduced the dosage of euthyrox to 12.5 UG, which has been maintained up to now. With regular follow up and close observation with the patient if we fail to treat patient with euthyrox we may follow the other protocol treatment like radioactive iodine is an alternative and can be used as well especially if the patient do not respond anti-thyroid medication, At present, the child is in the second grade of primary school, with medium academic performance and 124 cm height.

Ectopic thyroid tissue is formed due to aberrant migration of the thyroid gland as it descends from primitive foregut to the region of pretracheal in the neck. The anatomy of thyroid gland differs considerably among the vertebrate classes [4,5].

Most ectopic thyroid found in the mouth 90% of the patients with clinicinal presentation of bleeding and also can find the other anatomical structures at level of mediastinum larynx trachea esophagus and heart.

The ultrsongraphic imaging allows the relative ease of clinical diagnose, is in low cost and lacks ionizing radiation initial modality of choice for a patient who is suspected of having thyroglossal duct cyst which is depicted as simple well-circumscribed anechoic cyst with through transmission [6].

In this patient we find the diagnose of ectopic thyroid with the help of CT and US we did not do surgery we immediately started medication with anthithyroid and we find the TSH become normal and the patient is normal of thyroid function and we find the good result of treatment of patient with 6 months.

Mediastinal masses should have examined carefully and rule out the diagnose of ectopic thyroid tissue normally located thyroid gland CT or magnetic resonance imaging or ultrasound is recommended for evaluating the site and size of the thyroid lesion.

Mediastinal ectopic thyroid should have considered surgery because of high risk of tracheal compression and may cause airway problems. Because mediastinal mass can compress the heart and patient might have shortness of breath persistent cough patient may cough blood and might develop sudden cardiac arrest [8].

Intracardiac ectopic thyroid tissue have been rule out more than 20 cases, the most frequent location is right ventricle proximity of interventricularseptum. Echocardiographic is recommended to evaluate the cardiac mass and find the possible ad final diagnose CT or magnetic resonance imaging contributes with the information of the mass and it’s the anatomical position. We considered surgery. 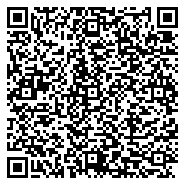