This work based on literary data discusses the influence of the process of metal fatigue on the change of coercivity. Experimentation on alternate stress (alternating voltage) has resulted in an increase of defects concentration of a structure: pin-hole defects – vacancies, line defects – relocations, volumetric defects – micro separation. The area of reversible damaging was chosen as a criterion of an uninterrupted operation. According to a linear accumulative damage theory (Ψi) there was chosen an amount equal to ratio a number of strain cycles (ni) to the totality of strain cycles at the given strain or load amplitude (Np). It is proposed to consider that in the area of reversible damaging a condition Ψ= (0,2-0,3)δp must be met where δp is a homogeneous deformation of a given steel grade. Devices for testing coercive strength and state standards allowing to define mechanical properties of steel to coercivity.

An objective of this work is a statement of need and necessity of definition of mechanical properties and limited operation life of a metal in the operational process with help of coercive strength.

In the operational process, any construction is exposed to constant and alternate loads. In the course of time, alternate loads lead to metal fatigue and eventually to its failure. Metal fatigue resides in the accumulation of defects of the structural condition in the process of alternate loads. Amount and intensity of load, as a rule, are random and unpredictable features. Hence it is possible only approximately to estimate the influence of spurious behaviors on the change of construction steel microstructure. The change leads to its failure. This is true that fatigue failure occurs accidentally without any apparent marks of prior plastic deformation. Strength properties of constructional steels increase a little at the beginning of the process of fatigue testing and then, attaining a maximum, decrease abruptly and a failure occurs. Steel dislocation structure at fatigue changes the same way as at static tension. At the beginning the growth of density of single dislocations occurs. Afterwards, reaching a certain density, single dislocations develop into dislocation walls forming a cell structure. If further deformed, a cell dislocation structure develops onto a striple-like one. It is considered [1] that formation of striplelike structure is the beginning of evolution of irreversible failure rate. The works [2-5] show that the border line between reversible and irreversible failure rate of steel can be estimated at the deformation amounting to 0,15-0,20 of a homogeneous deformation.

Construction metal can operate securely in the area of reversible failure. Admissible operation of metal may be to a certain degree of development of irreversible failure; afterwards further operation may lead to accident unpredictable fracture. Definition of a border line between reversible and irreversible failure and admissible one is achieved by means of researching of microstructure and mechanical properties of samples, cut out of definite places of a construction. As a rule they are the places with the biggest strain.

Affecting the construction in the operational process is in general of stochastic nature. However, operational conditions of any specific construction can be most probably treated as normal, i.e. as a determined system. Consequently metal damage accumulation can be apparently described with a Palmgren-Miner liner model [6]:

Where ni is a number of cycles,

Np Is a number of cycles before failure at a constant amplitude of deformation or strain.

Therefore, value Ψi defined according to the formula can be treated as a quantity characteristic of failure relevant at ni cycle numbers:

According to the work [2] reversible failure is relevant to a value equal to (0,2–0,3) δp where δp is percentage extension at homogeneous deformation. Therefore, the biggest value of reversible failure with account of the formula (2) looks like:

The Figure 1 shows the change of coercive strength from the failure rate for steel 09Г2 at extension to the fracture. 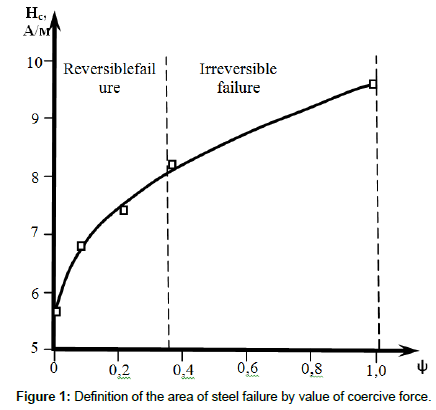 Figure 1: Definition of the area of steel failure by value of coercive force.

In that regard appliance of non-destructive testing of steel structure and properties is of practical importance. Coercive strength of a metal is the most sensitive properties to the change of a microstructure. This way, for example, at the extension deformation of constructional steel to (4-5) % coercive strength increases to (50-80) %, in this condition acoustic properties (the speed of elastic waves), electrical resistance increase by (2-5) % [8-10].

Application of steel coercive force for definition of microstructural characteristics and mechanical properties is allowed by a series of regulatory documents: «GOST (State Standard) 30415-96. Steel Nondestructive control of mechanical properties and microstructure of metal products by means of a magnetic method», «OST (industry standard) 14-1-184-65, «ТU (technical conditions ) -14-1016-74» and other.

Most of coercimeters have an autonomous mode of operation (from mains and from internal batteries). A mass of devices doesn’t exceed 2 kilos. It allows to use them not in both laboratory and reallife conditions.

Coercive force is arc wise connected to the flow limit and temporal resistance to fracture [11,12]:

A and Bare coefficients identified empirically which depend on steel chemical properties.

Coercive force is connected to the grain in proportion [13-15]:

Where d is a grain size;

C is a coefficient depending on a steel type.

For constructional steel the size corresponds the diameter of a ferritic grain.

With references to the performed research and analysis of literary data we may conclude that there is a sufficient theoretical and experimental base for dependence of coercive force on the steel structure. Steel structure determines a complex of mechanical properties. Consequently, the measurement of coercive force of constructional steel allows to monitor the strength and remaining operation life by means of a nondestructive methods.