Introduction: Odontogenic infection may happen due to toothalveolar infections. The infection can affect the subfascial spaces, especially when affecting the lower molars, although formation of temporal abscesses is unusual. Such abscesses occur with pain, edema, erythema, trismus, fever, and diagnostic confirmation comes from Tomography/Resonance of the Face and laboratory tests. Recommended treatment involves hospitalization, support, empirical antibiotic therapy-Secondarily directed by culture and antibiogram-and surgical drainage.

Objective: To Report an unusual case of complex odontogenic infection and its therapeutic approach.

Resumed Report: A 60-year-old female presented pain and edema on left hemi face after endodontic treatment of the

second lower molar, treated with oral antibiotics. After five days: clinical worsening, being referred to the Red Cross Hospital–Paraná, presenting trismus, edema in left temporal and malar regions, without floating point. Tomography and Resonance of the Face: net collection in anterior region of left masticator and temporal spaces, edema of the masticatory musculature. We have proceeded with hospitalization and treatment with intravenous Ceftriaxone, Clindamycin and corticosteroid for 4 days, without any improvement. Surgical collection drainage conducted in left masticator and temporal spaces, keeping Penrose drain for 5 days. Favorable evolution and hospital discharge followed, with oral antibiotic and corticosteroid therapy for 10 days. Ambulatory denouement: no signs or symptoms of infection, referral to dentist for follow-up.

Conclusion: Odontogenic infections can evolve to extensive abscesses, systemic impairment and sepsis. Despite clinical efforts, early diagnosis and surgical approach are the most important measures on complex infections.

Endodontic Surgery consists of a range of procedures that aims to treat or prevent periradicular pathologies, and the Canal Treatment - and its variants - is one of the main representatives [1]. Among its complications, odontogenic infections stand out. Such infections, often polymicrobial, may progress through the lymphatic and hematogenic pathways, or contiguously, being responsible for the formation of large purulent collections on the face and neck [2]. However, the progression of such infections to the formation of temporal abscesses is an uncommon event [1,3,4] being the patient’s immune response, its associated systemic diseases and the virulence of the causative pathogens the main determinants involved in this progression [2,4].

Patients present, according to the magnitude of the abscess, with facial pain, trismus and inflammatory signs at the affected site, in addition to general symptoms such as fever and prostration [3-5]. For diagnosis, in addition to detailed anamnesis and physical examination, computed tomography and magnetic resonance imaging are fundamental, and additional laboratory tests such as leukogram and C-reactive protein may corroborate suspicions [5,6]. Treatment is conducted with hospitalization and which is based mainly on broadspectrum antibiotic therapy and drainage of collections [1,4-7].

This study aims to report a case of odontogenic infection of unusual evolution, with the formation of extensive abscess in temporal region. For the data collection, information was obtained from medical records, in addition to the longitudinal follow-up of the patient from admission to outpatient discharge.

The Patient was 60 years old, female, submitted to dental treatment of the second left lower molar, evolved with pain and edema in ipsilateral hemiface, and oral antibiotic therapy was initiated. Symptoms progressed after 5 days of treatment, subsequently initiating trismus and worsening of inflammatory signs in face (Figure 1), when it was admitted to the Brazilian Red Cross Hospital, Paraná. At physical examination, there was edema located in the left temporal and molar regions, with no floating point. Face tomography and resonance presented a collection, with peripheral contrast enhancement, both in the anterior region of the masticatory space and in the left temporal space, as well as signs of diffuse edema of the masticatory musculature, mainly Temporalis muscle (Figure 2). Intravenous antibiotic therapy was initiated with clindamycin and ceftriaxone, associated with corticoid for another 4 days. Requested evaluation of the otorhinolaryngology staff, who indicated surgical procedure for drainage of the abscess. Drainage was performed by intraoral and temporal incision, simultaneously. During the surgical procedure, a fetid purulent collection – sent for culture ant antibiograma – was found in the left masticatory and temporal spaces, maintaining the communication of the affected areas with a Penrose drain (Figure 3). The drain was maintained for another 5 days. Patient presented clinical and imaging (ultrasonography) improvement, with laboratory tests within normality. 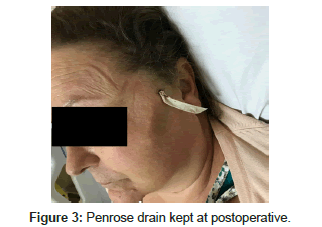 Patient was discharged with oral antibiotic and corticosteroid therapy for another 10 days. At outpatient return, the patient was asymptomatic, without alterations at the physical examination, being discharge after referral to dentistry for follow-up of dental treatment.

Odontogenic infections usually result from pericoronarites, dental pulp caries, periodontitis and complications of dental procedures [5], and in the 3rd and 2nd mandibular molars - as in the case studied – lies their main source of foci, respectively [7,8]. A progression of these infections occurs by contiguity, lymphatic or hematogenic [2]. However, the evolution to the formation of temporal abscess is not a common event, as occurred with the patient on the screen [1,3,4].

The left hemiface pain and edema, in addition to trismus and local and systemic inflammatory signs, was consistent with the descriptions in the literature [3-5], and the unfavorable evolution with oral antibiotic therapy was probably due to the fact that the etiology was mainly polymicrobial, with aerobic (especially Streptococcus sp.) and anaerobic (such as Peptostreptococcus sp.) germs of native oral flora [1,5,7,9].

As proposed in literature [6,8], the patient was promptly hospitalized and submitted to face and neck imaging by computed tomography and magnetic resonance imaging, which showed collections in the masticatory and temporal spaces on the left, as well as adjacent soft tissue edema. According to Bahl et al. [7], the treatment of odontogenic infections depends on the evolution and severity of the infection, and its success is strongly linked to local decompression, removal of the causative factor and adequate antimicrobial choice. Empirical antibiotic therapy should be instituted, but it is essential to collect pyogenic material for culture and antibiogram in order to efficiently target the therapy [1,5,7]. Localized infections can be resolved after empirical treatment with intravenous antibiotics that cover Gram positive and negative germs, aerobic and anaerobic bacteria of the native oral flora, such as Amoxicillin-Clavulanate, Clindamycin, Cephalosporins and Metronidazole [4,5], in adition to supportive measures and local heat with heated wet compresses, satisfactory response being seen early. However, complex abscesses, such as those involving the masticatory and temporal spaces [6,7], usually with a long evolution time, tend to respond poorly to these initial measurements, requiring a surgical approach with drainage of the collections evidenced by image examination 5, explaining significant improvement of the patient only after abscess drainage.

Still, according to Bahl et al. [7], surgical treatment and restoration or extraction of the infected tooth are the most important measures in the treatment of odontogenic orofacial infections. Thakur et al. [10], affirm that the usual route of drainage of odontogenic temporal abscesses is performed in the temporal region, in the capillary implantation line, at a 45° angulation with the zygomatic arch, but proposes an alternative drainage of more superficial abscesses, accessing the posterior auricular region, justified by better aesthetic results to the patient. In a report, Oliveira Neto et al. [3] proposed the drainage of an odontogenic temporal abscess with concomitant intraoral and extraoral incisions, a technique chosen by the staff in the case studied. After satisfactory clinical evolution, hospital discharge with oral antibiotic therapy and outpatient follow-up, as supported by similar studies [1,3,7], were chosen.

Odontogenic infections can evolve to extensive abscesses, systemic impairment and sepsis. Despite clinical efforts, early diagnosis and surgical approach are the most important measures on complex infections.