3Faculty of Health and Science, Institute of Learning and Teaching, University of Liverpool, Liverpool, UK Management of persistent hyperparathyroidism is either medical or surgical or both and practices vary across different centres. Use of cinacalcet has increased in recent years both as bridging therapy prior to parathyroidectomy or instead of parathyroidectomy. Although it reduces the burden of hypercalcaemia related morbidity, no benefit on bone mineral density has been reported in the literature. Rebound hyperparathyroidism on discontinuation, significant gastro-intestinal side-effects, cost of the drug and lack of availability limit its use. 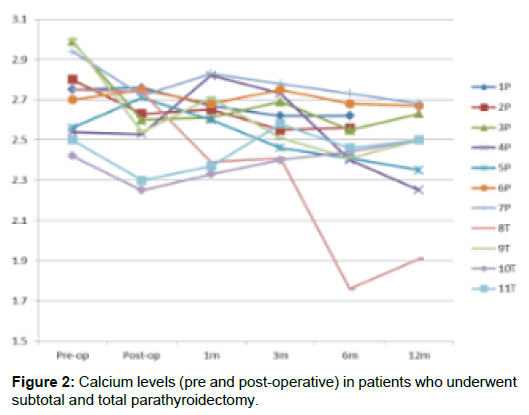 There have been some reports of adverse effects on the graft function after parathyroidectomy [9]. However, in a systematic review of 47 articles published on treatment for tertiary hyperparathyroidism, renal graft survival after surgical treatment was comparable with cinacalcet therapy. Both modalities were safe although surgical treatment appeared to have higher cure rate than medical therapy [4]. In the early post-operative period, transient reduction in graft function has been reported but function is restored in the longer term [5] (Figure 3). 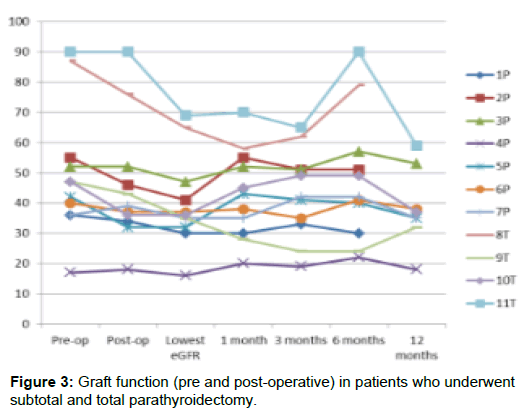 In this single centre retrospective study, we identified patients that had a parathyroidectomy post transplantation between 1/01/2007 and 1/01/2017 (n=22). Patients with failed transplants and multiple transplants were excluded on the rationale that the disease process of hyperparathyroidism is different in these individuals. Remaining 11 patients were divided into 2 groups –those that had total parathyroidectomy (TP)-n=4 vs. those that had subtotal parathyroidectomy (SP)-n=7. Graft function and bone biochemistry (Calcium, Phosphate and PTH) were recorded immediately postoperatively, at 1 month, at 3 months, at 6 months and at 12 months for all of these patients. Nadir Calcium level post-operatively and use of IV Calcium to correct hypocalcaemia were also recorded.

Demographic characteristics for each patient included age, sex and ethnicity. Details were also obtained for use of bisphosphonate therapy, use of Cinacalcet and histology of tissue obtained during surgery. Results were statistically analysed using unpaired T-test on graphpad calculator.

We found that in TP group, 100% achieved normocalcaemia and in SP group 57% achieved normocalcaemia at 1 year post surgery. Calcium levels remained marginally elevated in remaining 43%. In 75% of TP group, there was sustained decline in eGFR at 1 year. Causes included profound hypercalcaemia post-operatively due to high dose of calcitriol, cellular rejection and recurrent urinary tract infections. These causes were thought not to be directly related to the surgery.

Only minor complications occurred post-op: 2 patients had cyst formation in SP group and 1 patient in TP group. IV Calcium post-operatively was required in 1 patient in TP group and in none of SP group. Histology showed adenoma in 2 specimens from SP, nodular hyperplasia in 4 specimens from SP, multinodular goitre in 1 specimen from SP and all of the 4 TP specimens showed nodular hyperplasia.1 patient from TP group had received cinacalcet prior to surgery. There was no episode of hypocalcaemia post-operatively. Calcium level was in normal range at 12 months. PTH levels dropped post-operatively in all the patients. At 6 months, 1 patient had high PTH requiring cinacalcet to be restarted. 2 patients from SP group had received cinacalcet prior to surgery. There were no episodes of hypocalcaemia post-operatively and although calcium levels were in the normal range at 12 months, PTH level was above the normal range (11.7, 16.4 pmol/L) (Figure 4). 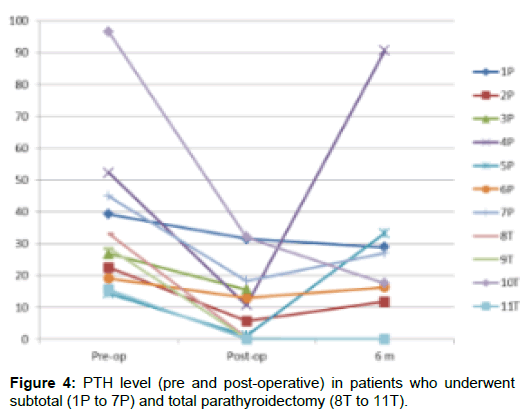 Figure 4: PTH level (pre and post-operative) in patients who underwent subtotal (1P to 7P) and total parathyroidectomy (8T to 11T).

Evidence on best practice for managing hyperparathyroidism after renal transplantation is lacking. Often, the decision to treat medically or intervene surgically is based on the clinician’s discretion and availability of resources. Tailored approach of management, which takes into consideration patient’s age, co-morbidities, severity of bone mineral disease based on blood biochemistry as well as objective evidence of reduced bone mineral density (DEXA, bone biopsy) surgical expertise for parathyroidectomy and availability of cinacalcet may need to be adopted (Figure 5). 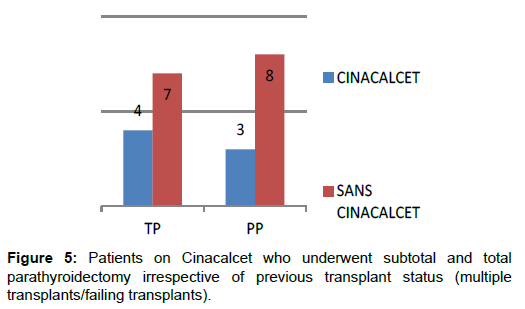 Hip and ankle/foot fractures are the commonest after transplantation. Recent analysis of 21,769 kidney transplant recipients in UK showed that outcomes after hip fractures are poor. Hip fractures were independently associated with a threefold increase in mortality risk [17].

There are published studies which have looked at the predictors of aggressive hyperparathyroidism post-transplantation and by and large, high PTH and high Calcium levels prior to transplantation appear to be the most important biomarkers [18-27]. Dialysis vintage >6 years, calcium phosphate products >55 and cinacalcet use before kidney transplantation were found to be strong predictors of persistent hyperparathyroidism post transplantation [24]. However, PTH level alone is a poor predictor of underlying bone health and turnover. Bone biopsy is able to detect adynamic bone disease, bone density, presence of osteodystrophy or osteonecrosis. Bone biopsy with double-tetracycline labelling is the gold standard to accurately diagnose type of post-transplantation bone disease. It is not widely available and therefore its practical use in clinical practice is limited.

Following table demonstrates use of cinacalcet for treating persistent hyperparathyroidism in rcent studies (Table 1). Comparison of medical therapy with surgical therapy in terms of calcium levels and bone mineral density has been demonstrated in these studies [28-40].

Cinacalcet is a calcimimetic agent and it binds selectively to calcium sensing receptors in parathyroid glands and reduces serum PTH levels by enhancing the inhibitory effect of extracellular calcium ions on PTH secretion even with normal or low serum calcium levels. Cinacalcet has been shown to be an effective strategy for managing persistent hyperparathyroidism in renal transplant recipients [10,11]. Recent meta-analysis of 21 non-randomised studies with 411 patients demonstrated that cinacalcet corrected hypercalcaemia and decreased PTH levels [11]. But it is not approved for use in transplant recipients and it has been reported to cause gastrointestinal disturbances and may not be well tolerated. Cinacalcet has also been shown not to improve all-cause or cardiovascular mortality as per EVOLVE trial [16]. Correction of severe hyperparathyroidism has been shown to be similar in both surgical and Cinacalcet groups in reported studies [17].

Changes such as bone remodelling, alteration in the PTH-Vitamin D-FGF-23 axis, corticosteroid usage and other complex metabolic interactions after transplantation result in reduction of bone density, increased risk of fractures and overall increased risk of mortality [12]. It is well established that persistent hyperparathyroidism is associated with adverse cardiovascular outcomes in chronic kidney disease [13].

Denosumab is a humanised monoclonal antibody against the receptor activator of NF-KB ligand (RANKL) and it decreases bone resorption while significantly increasing bone mineral density and reducing the risk of fractures in patients with impaired kidney function. In a recent randomized controlled clinical trial in kidney transplant recipients, denosumab significantly improved bone mineral density as well as bone quality when given during the first year after transplantation [14]. As it is not renally cleared, no dose adjustment is required for reduced kidney function unlike bisphosphonates and therefore, it is considered superior to bisphosphonates for use in in patients with significant graft dysfunction, although its use has not been widely reported in renal transplant recipients [12,14].

From this study, we can conclude that subtotal parathyroidectomy can safely lower calcium and PTH levels in renal transplant recipients with persistent hyperparathyroidism. No requirement for IV Calcium makes subtotal parathyroidectomy more favourable in terms of reduced inpatient stay, less frequent blood monitoring and fewer complications such as thrombophlebitis from the intravenous infusion. Graft function is largely unaffected by either of the 2 types of procedures and for those that have decline in graft function post-op- in the majority, eGFR stabilises by 1 year. This is similar to other studies that have looked at impact of parathyroidectomy on graft function [9,10]. In 1 patient, graft function was affected by hypercalcaemia which causes direct vasoconstriction of the allograft and natriuresis-induced volume contraction. Negative haemodynamic effect of parathyroidectomy on renal blood flow may be augmented in the presence of calcineurin inhibitor induced renal vasoconstriction especially in the early post-transplant phase [41]. It has also been shown that PTH has vasodilatory effects on preglomerular vessels while constricting efferent arterioles, therefore, when glomerular filtration is reversed by parathyroidectomy, GFR may deteriorate acutely [42]. PTH-related protein expressed in renal tubules and vessels may also play a role in regulating graft function post-parathyroidectomy.

Longer term study is needed to determine best practice to improve long term outcomes in terms of bone biochemistry and associated morbidity. Subtotal parathyroidectomy is a safe procedure and has the added benefit of low rate of acute hypocalcaemic events as compared to total parathyroidectomy [24]. Cinacalcet is also safe and effective and may be bridging therapy or rescue therapy post parathyroidectomy for aggressive persistent hyperparathyroidism.