Background: Focal segmental glomerulosclerosis is an important cause of chronic kidney disease in children and young adults. Steroid resistance is common and the severity and persistence of proteinuria are associated with progression toward advanced renal failure. The aim of the present study was to analyze the importance of partial remission of proteinuria on the outcome of children and young adults with FSGS.

Methods: 63 children and young adults with the idiopathic nephrotic syndrome and focal segmental glomerulosclerosis, not otherwise specified variant, were studied

Results: 29 patients were male and 34 female with a mean age of 10.0 ± 4.9 years. The follow-up was 73.4 + 72 months. The clinical course was characterized by sustained remission or remissions/ relapses in 28 patients (44.4%), partial remission in 8 (12.7%) and persistent nephrotic syndrome in 27 (42.9%). At final evaluation, 17 patients were hypertensive and 17 had a renal insufficiency of variable severity, although 9 evolved to advanced renal failure. Renal insufficiency at the end of the study was less frequent in patients with partial response than in patients with no-response, although this was higher than in those with complete remission (25.0%, 44.4%, and 10.7%, respectively). Partial remission was correlated with better renal survival than no-remission, although somewhat less impressive than in complete remission.

Focal segmental glomerulosclerosis (FSGS) is an important cause of proteinuria and chronic renal disease in children and young adults, accounting for 15 to 20% of the total cases of idiopathic nephrotic syndrome [1-3]. Recent studies conducted at different centers suggest the incidence of idiopathic FSGS has been increasing in children and adults [4,5]. Although the clinical course and outcome are heterogeneous, resistance to steroid therapy is common and a considerable number of patients with nephrotic-range proteinuria progress to advanced renal failure after 10 years [2,6,7].

The outcome of FSGS and nephrotic syndrome has been associated with the genetic background, renal function at baseline evaluation, tubulointerstitial changes and morphological variants of FSGS and proteinuria [6,8-11]. The severity and persistence of proteinuria have been frequently associated progression toward renal failure and the need for renal replacement therapy in contrast with patients with complete remission of proteinuria [1,6-10,12]. Few reports have been published, however, on the long-term outcome in patients with a reduction of proteinuria to non-nephrotic levels.

Not otherwise specified (NOS) is the most frequent histologic variant of FSGS, in all age groups. In a recent report, it was diagnosed in 68% of the patients, more frequently in children compared with teenagers and adults: 47% of children, 29% of teenagers, and 24% of the adults [11].

The aim of the present study was to analyze the importance of partial remission of proteinuria on the outcome of children and young adults with focal segmental glomerulosclerosis, not otherwise specified variant, and the nephrotic syndrome.

All patients younger than 18 years of age with the idiopathic nephrotic syndrome and a biopsy-proven FSGS, who were evaluated and followed-up at University Hospital – Federal University of Bahia/Medical School for more than 6 months, were retrospectively included in the present study. FSGS was diagnosed by the histological findings of focal and segmental consolidation of the tuft by increased extracellular matrix, obliterating the glomerular capillaries, according to D’Agati et al. [14]. For the purpose of the present study, only patients classified as FSGS not otherwise specified (NOS) were considered.

At the time of initial evaluation a detailed history was taken and a physical examination was performed and the following data were recorded: (a) - medical, social, family, and perinatal histories, (b) – evidence of systemic diseases which could be related to the renal disease, (c) – blood pressure, (d) – laboratory evaluation including urinalysis, 24 hours urinary protein excretion, creatinine clearance, serum levels of creatinine, albumin, cholesterol, and other tests to exclude systemic diseases, as appropriate. Exclusion criteria included a family history of kidney disease, low birth weight, history consistent with reflux nephropathy, cyanotic heart disease, reduced renal size on ultrasound imaging, patients on dialysis, or kidney transplant patient.

Nephrotic syndrome was diagnosed by the presence of edema, urinary protein excretion > 50 mg/kg body weight per 24 h, serum albumin < 3.0 g/dl and hyperlipidemia. Hypertension was defined as readings exceeding the 95th percentiles for systolic or diastolic blood pressure (BP) for age and gender in patients younger than 12 years of age, and as BP above 140/90 mmHg in older patients, or by the use of antihypertensive medications. Renal insufficiency was defined by serum creatinine levels above the age-related normal levels and endstage renal disease by the need for dialysis therapy.

Prednisone was used at a dose of 1 to 2 mg/Kg of body weight up to a maximum of 60 mg/day, divided into two to three doses, for a period of 4 to 6 weeks, followed by the same dose of prednisone, given as a single dose on alternate day, for four additional weeks. The medication was then gradually discontinued over a period of two to three months. In addition to the steroid, some patients were also treated with another immunosuppressive agent, including cyclophosphamide, cyclosporine and, less frequently, mycophenolate mofetil, prescribed for steroid resistance or dependence or partial response to steroid therapy. Most patients also received diuretics, blockers of the renin-angiotensin system and/or other antihypertensive drugs, as needed.

Remission of proteinuria was defined as the absence of proteinuria (complete) or as a reduction to non-nephrotic levels (partial). No remission, as the persistence of nephrotic-range proteinuria over 6 weeks of daily treatment. Patients with advanced renal failure the time of the diagnosis of the nephrotic syndrome were not included in the present study.

The clinical course and outcome for each patient were evaluated at the end of the follow-up period by recording current medication, blood pressure levels, urinalysis, and serum creatinine and albumin levels.

All data are expressed as mean values ± standard deviation or as a proportion. Comparisons between groups were performed with Student’s t-test and Fisher`s exact test, as appropriate; ANOVA and Kruskal-Wallis`s tests were used when more than two groups were compared. The survival curves were estimated according to the Kaplan-Meier method; the log-rank test was used to compare groups. To analyze a possible effect of gender, the age of onset of nephrotic syndrome, remission of proteinuria and outcome a Cox proportional hazards model was applied. P values < 0.05 were considered significant. The statistical analyses were performed using the Statistical Package for Social Science (SPSS) for Windows.

This study was approved (#06774212.6.0000.0049) by Ethics Committee in Research at Hospital Universitário Prof. Edgard Santos/Federal University of Bahia.

A total of 63 patients with a diagnosis of focal segmental glomerulosclerosis, not otherwise specified (FSGS-NOS), and nephrotic syndrome was studied. At the time of the diagnosis of NS, the mean age of the patients was 10.0 ± 4.9 years. Twenty-nine patients were male and 34 female. Hypertension was recorded in 10 patients and mild renal insufficiency in 11. The renal insufficiency was transient and deemed secondary to intravascular volume depletion in 6 of these patients.

Some demographic and clinical data are shown in Table 1. The mean duration of follow-up was 73.4 + 72 months. Except for mean age at the time of the diagnosis and the duration of follow-up, no other significant differences were found between the three groups. Sixty patients (95%) were initially treated with oral corticosteroids and three patients were treated with symptomatic medications and did not receive corticosteroids or other immunosuppressive agents.

Table 1: Some demographic and clinical data in patients with focal segmental glomerulosclerosis.

The clinical course was characterized by sustained remission or remissions/relapses in 28 patients (44.4%), partial remission in 8 (12.7%) and persistent nephrotic syndrome in 27 (42.9%). The renal insufficiency at the time of the diagnosis of the nephrotic syndrome was mild, reversible in 6 patients, stable in 3 and slowly progressive in 2. At final evaluation, 17 patients were hypertensive and 17 patients had renal insufficiency of varying severity, 9 patients requiring renal replacement therapy (Table 2). Renal insufficiency at the end of the study was less frequent in patients with partial response than in patients with no-response, although higher than in those with complete remission (25.0%, 44.4%, 10.7%, respectively, p <0.05). However, we could not demonstrate a difference between partial and no-remission of proteinuria regarding renal survival (Figure 1). This was likely due to the number of patients. Also, the prevalence of hypertension in the groups of patients with proteinuria, as opposed to patients with no proteinuria, was not different (Table 2). 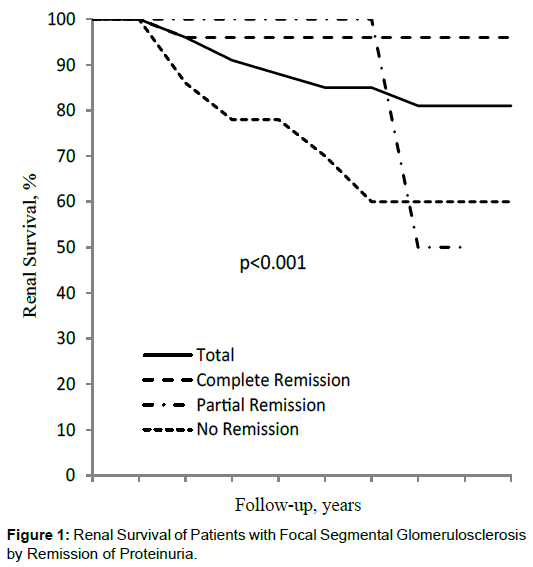 Figure 1: Renal Survival of Patients with Focal Segmental Glomerulosclerosis by Remission of Proteinuria.

The mean survival time of the group was of 226.1 (95%CI =181.9, 270.3) months and it was longer in the group of patients with remission of proteinuria compared to patients with no remission (log rank, p<0.01). After adjustment for gender and age at the time of the diagnosis of the nephrotic syndrome, no remission of proteinuria was significantly associated with the end-stage renal disease. The influence of corticosteroids, other immunosuppressive agents, and symptomatic medications was not addressed in the present study.

Even though the patients with persistent nephrotic-range proteinuria were somewhat older, no predictor of long-term renal outcome other than complete or partial remission of proteinuria was found in the present series. In addition, the longer follow-up of the patients with complete remission allows excluding the length of the follow-up to as a cause of the progression to end-stage renal failure. The relevance of the remission of proteinuria as a predictor of long-term outcome in FSGS has also been observed [6-10]. Partial remission of proteinuria, however, has not been recognized as a surrogate outcome. Proteinuria is an important risk factor for the progression of renal disease and decline of renal function and several laboratory and clinical studies have shown that proteinuria seems to be independently associated with improved long-term prognosis of the renal disease [15-17].

The role of the immunosuppressive agent and/or the blocker of the renin-angiotensin system used were not evaluated and are beyond the purpose of the present study. Of note, one patient treated with symptomatic medications evolved with spontaneous complete remission of proteinuria and maintenance of renal function. Nonetheless, over the period of the study three patients with complete remission of proteinuria evolved with renal failure, one of whom requiring renal replacement therapy. Such evolution seems related to another progression factor for kidney disease, independent of the proteinuria per se. The interconnection between treatment, change in proteinuria and outcome of the renal disease has been a matter of discussion [18]. The aim of the present study was to examine the impact of the remission of proteinuria on the progression toward end-stage renal disease children and adolescent with nephrotic syndrome related to FSGS-NOS [19,20]. Some limitations, however, are apparent such as the absence of genetic studies [21,22] and the small sample size of patients with partial remission of the proteinuria. Furthermore, considering the low level of proteinuria and the potential long-term survival of children and young adults, and a low rate of progression of FSGS-NOS, even in steroid resistant patients, it is possible that a longer follow-up time could be necessary in order to better define the importance of the partial remission of proteinuria [11,23]. New therapeutic approach targeting the immunologic system as well as the podocytes is in progress [24-29]. However, as the remission of proteinuria is an important predictor of long-term renal survival in FSGS, therapeutic interventions to achieve reduction of the urinary protein excretion rate should be pursued.