Pembrolizumab Induced Hypophysitis in a Patient Allergic to Triamcinolone: An Increasingly Recognized Endocrinopathy Related to Immunotherapy

We would like to describe the clinical course of a 61-year-old gentleman known to have Stage IV left lower lobe lung adenocarcinoma who presented to us with unintentional weight loss for four months, easy fatigability and breast pain while showering. He was started on pembrolizumab immunotherapy about 9 months before presentation which he tolerated well. Subsequent endocrine work ups revealed features consistent with hypophysitis that lead to hypopituitarism in the form of secondary adrenal insufficiency and hypothyroidism. While more and more patients are receiving novel anti-cancer treatment for example immunotherapy, we should never forget and address the side effects it brings along. This study with all certainly supports the afore-mentioned suggestion.

Immune check point inhibitors (ICIs) increase antitumor response by an individual’s own immune system. They are distinct type of therapeutic antibodies that block down regulation of T-cell activation and response and results in antitumor activity.

Pembrolizumab is an example of such antibody that targets the immune checkpoint trans-membrane protein programmed cell death 1 (PD-1) on T lymphocyte. This receptor prevents our immune system from attacking its own tissues. Hence it is called immune checkpoint [1,2]. Interestingly, many cancers produce special proteins that bind to PD-1 and subsequently shut down the ability of immune system to destroy cancer cells [3]. Inhibiting PD-1 on the lymphocytes, pembrolizumab allows the immune system to target and destroy cancer cells. Though undesirable, this same mechanism also allows the immune system to attack the body itself and results in immunedysfunction side effects [2].

Though first approved for inoperable melanoma, pembrolizumab has been used for other malignancies such as metastatic non-small cell lung cancer with substantial clinical benefits. Unfortunately, increasing number of side effects is also being recognized known as immune related adverse events (irAEs). More common adverse events are mild and tolerable to patient such as colitis or diarrhea, skin toxicity and thyroid disorder but severe irAEs are also being reported which is likely from increased awareness and frequent use of this therapy. Here we describe a patient of secondary adrenal insufficiency and hypothyroidism resulting from pembrolizumab who presented to us with multiple constitutional symptoms.

A 61-year-old Chinese gentleman allergic to triamcinolone with background history of Stage IV left lower lobe lung adeno carcinoma with left malignant pleural effusion presented with loss of weight of 14 kg over four months. His weight loss was unintentional without any significant change in appetite. His weight was 80 kg during the initial period of treatment and when we trended his weight on his phone, we noticed that there has been a reduction of 14 kg over last four months. It was associated with increasing tiredness and interestingly, breast pain while showering. There was no breast discharge but patient noticed minimal swelling of breast for last three months. There was no headache, no change in shaving frequency or any polyuria and polydipsia.

Nine months ago, he was started on Pembrolizumab as a first line therapy for Stage IV left lung adenocarcinoma (tumors express PD-L1 [Tumor Proportion Score (TPS) ≥ 1%)], with no EGFR or ALK genomic tumor aberrations). The dose of pembrolizumab was 200 mg intravenous every 3 weeks. The patient tolerated pembrolizumab well aside from minor skin rashes. The remainder of his medical history, family history and social history were unremarkable.

Our patient’s vital signs on admission were unremarkable. There was no postural drop, visual acuity and visual field was normal. Neither any goiter nor significant gynecomastia was seen on examination with physical development score of Tanner stage 4.

• Short Synacthen test: inadequate response with cortisol levels of 150 nmol/L and 310 nmol/L after 30 and 60 min respectively (should rise to a peak of 550 nmol/L).

An MRI brain with contrast (Figure 1) was performed which showed: Diffuse enlargement and areas of heterogeneous enhancement of the pituitary gland. Firstly, in view of patient’s low 9 AM cortisol, low ACTH and inadequate response to ACTH stimulation test; these features are consistent with secondary adrenal insufficiency. Secondly, his low free T4, low free T3 and low TSH are suggestive of central hypothyroidism. To sum up, above lab results provide us a picture of hypophysitis involving both adrenal and thyroid function that lead to hypopituitarism.

We stopped his pembrolizumab initially. In view of recent CT lung finding of stable disease, patient requested a treatment break for his lung adenocarcinoma and agreed for steroid treatment. We noted that our patient was allergic to triamcinolone. He developed pruritic skin rash along with mild shortness of breath at the age of seven when he was prescribed triamcinolone. As there is presence of cross reactivity, we started him on Prednisolone 1 mg/kg instead of Hydrocortisone with a plan to taper to a physiologic replacement dose over 6-8 weeks. Following Prednisolone administration, he was also started on levothyroxine 25 mcg in the morning in empty stomach.

Our patient was reviewed 1 month after starting steroid. Since last consultation, he has gained weight of 3 kg. His energy level improved, appetite significantly increased and breast pain resolved. He was compliant to his medications. Lab results showed Cortisol (8 am): 92 nmol/L (normal range 180-620 nmol/L, Prednisolone stopped 1-day prior). His FT4 also normalized whereas TSH was unchanged from the last result. He was continued on same dose of levothyroxine and physiological replacement dose of Prednisolone of 7.5 mg in the morning with reinforcement of symptoms of hypocortisolism and stress dose during illness. Currently, he is planned to have close follow up with endocrinology to address his hormonal issue along with consideration of repeat MRI brain and Bone Mineral Density test on subsequent visits.

The use of Immune Check point inhibitors (ICI) has somewhat revolutionized cancer treatment options over the past several years. They promote enhanced immune response against tumor cells by inhibiting the down regulation of T-cells. Pembrolizumab increases Tcell activity by blocking PD-1 located on T-cells [4,5]. However, this particular mechanism is also responsible for the inflammatory sideeffects known as immune-related adverse events (irAEs) (Figure 2). 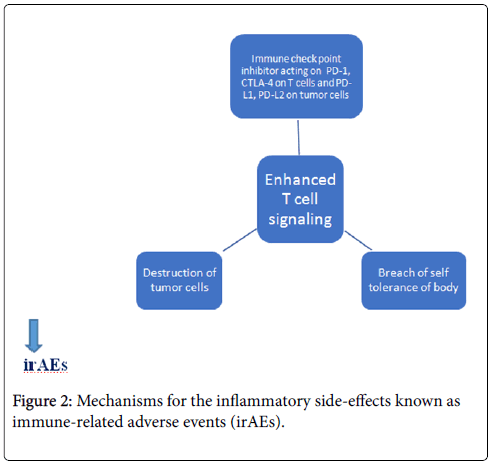 Severity of irAEs varies significantly. Most likely endocrinopathies are adrenalitis, thyroid disorder and pituitary dysfunction according to prior comprehensive reviews [7]. If we look into the data from previous studies; one study involving 296 patients receiving PD-1 inhibitor, around 2% of them developed clinically significant hypothyroidism with less than 1% being hyperthyroid [8]. The incidence of adrenal insufficiency was around 1.5% in one study involving 207 patients receiving PD-1 inhibitor [9]. irAEs resulting from PD-1 inhibitor is likely to be lower than anti-CTLA-4 agents [10]. This is possibly due to CTLA-4 modulating early phases of activation of memory T-cells, whereas PD-1 blockage inhibiting T-cells only at the time of immune-inflammatory response.

Hypophysitis is a condition resulting in inflammation of the pituitary gland. Different subtypes have been identified such as lymphocytic, granulomatous and plasmacytic (also known as IgG4- associated) although immunotherapy has emerged as a clinically significant aetiology in recent years. Most common findings related to diagnosis of hypophysitis include lethargy, weight loss, headache, hypopituitarism according to lab results and enlargement of pituitary on MRI. Subsequently, pituitary enlargement usually resolves in majority of patients though hypopituitarism is likely to be a permanent condition.

Important hormonal abnormalities seen in our patient include hypopituitarism presenting as both central adrenal insufficiency and hypothyroidism. The clinical and lab finding of hypopituitarism was consistent with the patient ’ s imaging findings of enlargement of pituitary on MRI which occurs in early stage of pituitary inflammation. Regarding the subsequent radiological finding of such cases, several studies covering the natural history of this disease suggest that pituitary atrophy and empty sella may be the final outcome [11]. This occurs likely due to hypervascularity of pituitary gland in early stage followed by fibrosis in the later stages. We were also challenged by the fact that our patient was allergic to triamcinolone which made us concerned about possible drug reaction after starting prednisolone. Fortunately, he was able to continue it without any adverse reaction. Secondary hypothyroidism was also notably present in our patient which manifested as lethargy, fatigability. During follow up of thyroid panel we also noticed persistently low TSH with negative thyroid auto antibodies and scans which further supports the diagnosis of central hypothyroidism. His subsequent thyroid hormone replacement was based on free T4 level.

In conclusion, in any oncology patient receiving anti-PD-1 or other immunotherapy, adverse events-for example, hypophysitis may present with insidious clinical course without the typical symptoms. Given the potential implication of hormonal dysfunction including sudden unexpected haemodynamic instability and death, it is necessary for physicians to be aware of this potentially manageable side effect when dealing with patients on immunotherapy and vigilant towards its development at any point in the treatment course. In addition, rapid approval of ICIs may not immediately address their side effects. Hence, more and more relevant cases should be collected and studied whenever physicians encounter any.

• Wide range of endocrine adverse effects is possible from immunotherapy.

• Hypophysitis is serious complication of pembrolizumab therapy which may present at any point in the treatment course.

• Early recognition and prompt hormone replacement with close follow-up is the key to pembrolizumab induced hypophysitis.

The authors declared no competing interests regarding the publication of the paper.