Peristaltic Flow in a nonUniform Channel with Heat and Mass Transfer

The combined effect of heat and mass transfer on the peristaltic flow of fourth-grade fluid in a non-uniform channel has been investigated. Flow analysis has been carried out in the presence of an induced magnetic field. The governing flow equations have been transformed in a wave frame. The arising equations have been solved for the stream function, pressure gradient, temperature, concentration, magnetic force function, induced a magnetic field and current density. The role of embedded parameters is displayed and discussed.

The study of peristaltic mechanism has become popular among the researchers during the last four decades. This is because of its wide ranging industrial and physiological applications. In physiological processes it is used by the body to propel or mix the contents of the tube, for instance, in gastrointestinal tract, ureter, the bile duct, and other glandular ducts. Industrial use of peristaltic pumping in finger and roller pumps is quite obvious. Engineers adopted this processes to pump corrosive materials and fluids that must be kept away from pumping machinery. Further the transport of toxic liquid is met by the nuclear industry so as to not contaminate the environment [1]. Since the seminal work of Latham [2] several theoretical and experimental investigations have been carried out in order to understand the peristaltic flows of hydrodynamic fluids under varied assumptions of long wavelength, low Reynolds number, small wave amplitude etc. Although the literature on the topic is extensive but few recent investigations can be mentioned by the studies [3-10].

The purpose of present research is to discuss the simultaneous effects of an induced magnetic field and heat and mass transfer on the peristaltic flow of a fourth grade fluid in a non-uniform channel. The considered fluid can predict the shear thinning/shear thickening effects. To the best of our knowledge, this problem has not been investigated yet. The paper is arranged as follows. Sections two and three provide the mathematical formulation and perturbed solution of the problem. Graphical discussion is presented in section four while the concluding remarks are given in section 5.

An incompressible magneto hydrodynamic (MHD) fourth grade fluid in a non-uniform channel is considered. X̄ Axis is chosen in the direction of wave propagation and Ȳ transverse to it. A constant magnetic field of strength H0 acts in the transverse direction which results in an induced magnetic field

The total magnetic field is

The following expression describes the geometry of the channel wall

In fixed frame the fundamental equations governing the flow are

are the material constants,

the material derivative, μ the viscosity, λr the trace, T in the superscript is the matrix transpose, p the pressure and Ī the identity tensor. The velocity V̄ for two-dimensional flow is of the form

And the Maxwell’s relations are

The relations between the fixed frame

can be written as

depict the velocity components in the fixed and wave frames respectively. The two-dimensional equations in the wave frame are

We set the dimensionless quantities as

In above definitions Pr , δ , Re, Rm, S and M denote the Prandtl, wave, Reynolds, magnetic Reynolds, Stommer’s and Hartman numbers respectively and the total pressure pm is sum of ordinary and magnetic pressures, E the electric field strength, m the nonuniformity parameter, γ the temperature, Ω the concentration and φ the magnetic force function. Further T0 and C0 denote the temperature and concentration at y=h.

Equation (1) in dimensionless form reduces to

In which the amplitude ratio α is equal to b/a0.

Where, the subscripts depict the partial differentiation. Adopting the long wavelength and low Reynolds number procedure we obtain

With the subjected boundary conditions

is used for the Deborah number.

Where the values of the involved

can be given through algebraic computations and

has been used in the above expressions. To save space we avoid to present the values of Al, Bk, Ci and Lj here. 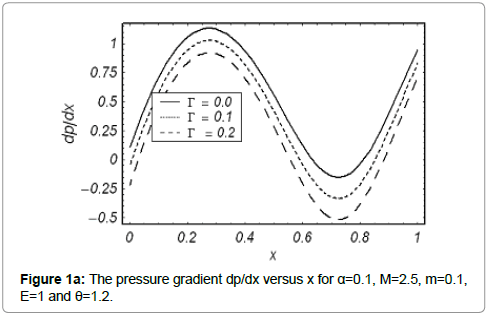 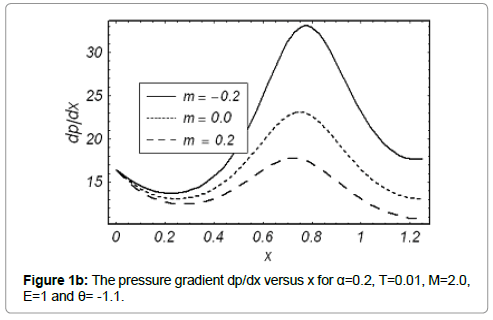 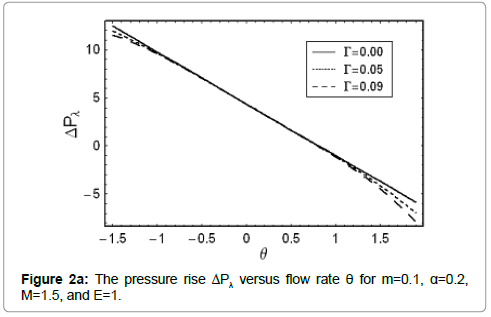 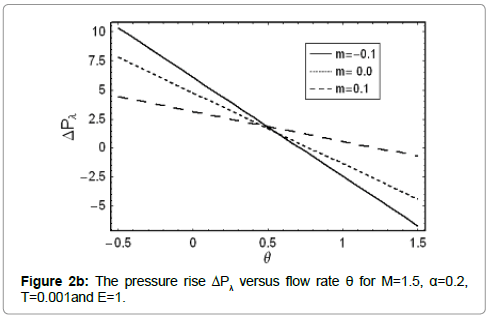 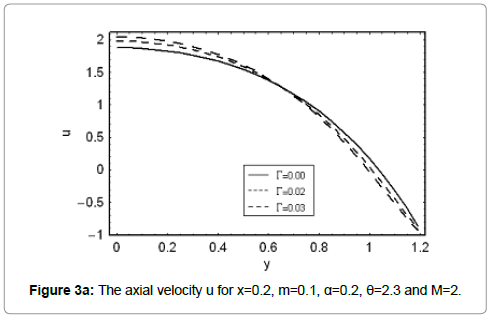 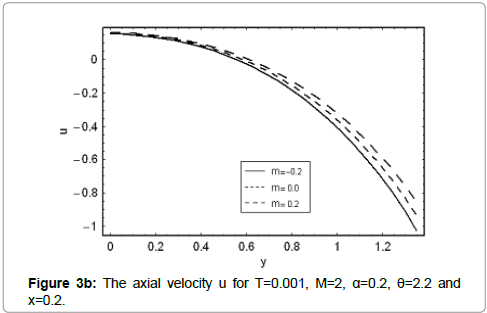 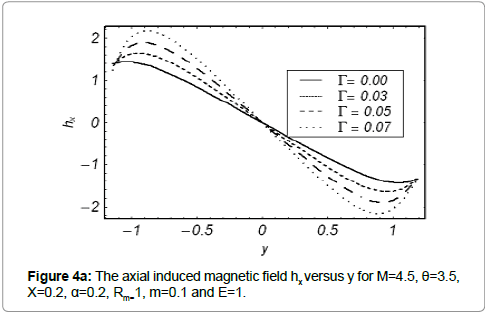 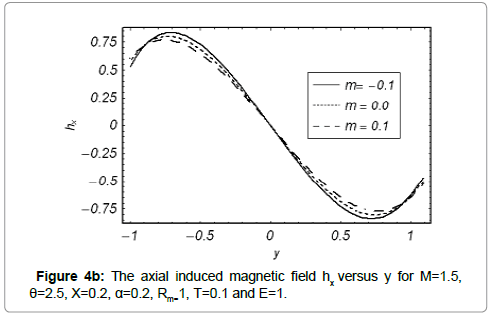 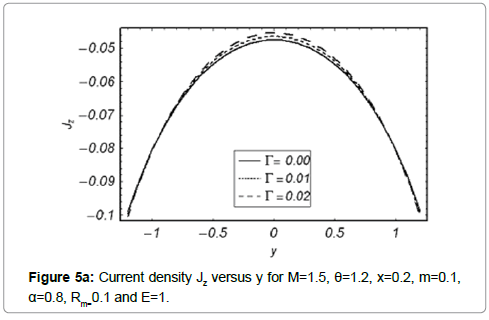 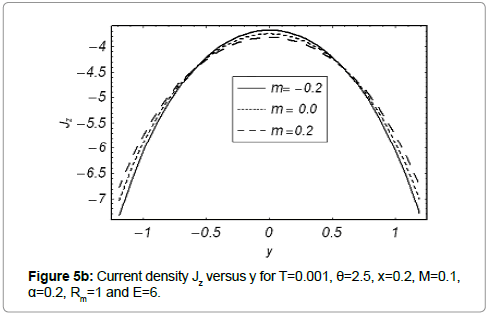 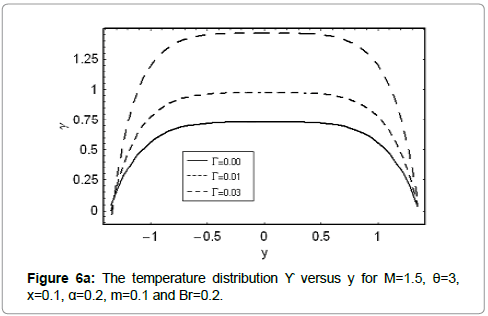 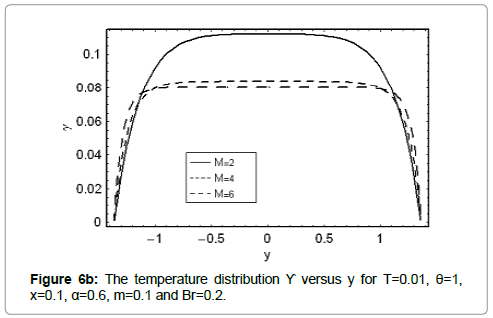 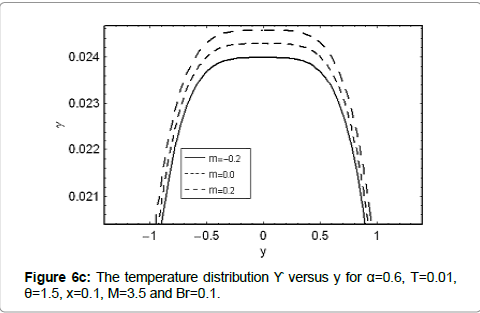 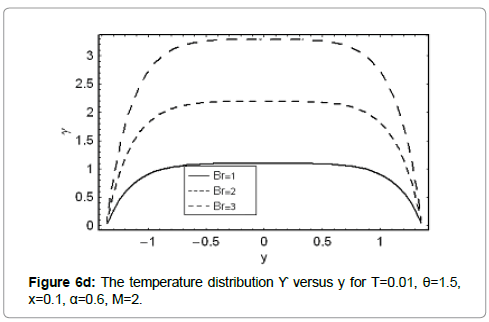 Figures 1a and 1b presents the axial pressure gradient dp/dx with x when different values of Γ and m are accounted. It is seen in Fig. 1a that amplitude of dp/dx decreases with an increase in Γ. Figure 1b elucidates that dp/dx for a divergent channel (m>0) is higher when compared to uniform channel (m=0) On the other hand dp/dx is lowest for a convergent channel (m<0).

The pressure rise ΔPλ against the flow rate θ is sketched in Figure 2a, 2b. Pumping action divides the region into four sections: Pumping region

The pressure rise ΔPλ for different values of Γ is shown in Figure 2a. It is noticed that pumping rate decreases by increasing Γ however for certain values of flow rate the pumping curves coincide which indicate that there is no difference between the Newtonian and fourth grade fluids. The pressure rise ΔPλ for convergent channel is also larger in magnitude when compared with the straight and divergent channels (Figure 2b).

The performed analysis shows that axial velocity at the wall (u( y = h) = −1) satisfies the no -slip boundary condition for all values of the parameters. The parametric presentation near the channel walls is different from the behavior at the center of channel. The velocity μ for different values of Γ is shown in Figure 3a. We observed that the velocity profile increases with an increase in Γ. Figure 3b illustrates the effects of m on u. Velocity for divergent channel is larger in magnitude in comparison to the straight and convergent channels at y=0.

The current density distribution Jz within γ for various values of Γ have been plotted in Figure 5a. It is observed that magnitude of Jz decreases when Γ increases at the Centre of channel while it increases range of y near the channel walls. The behavior of Jz against γ for the different values of m is shown in Figure 5b. This Fig. depicts that magnitude of Jz increases as we move from convergent to divergent channel at y=0. 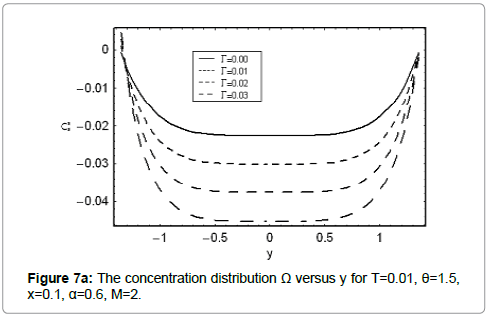 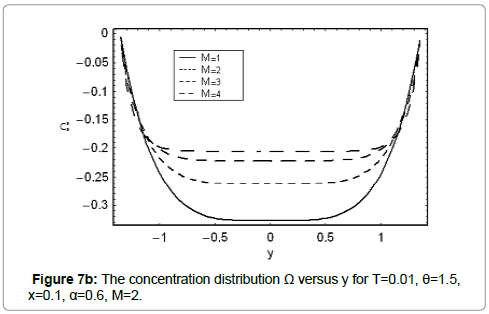 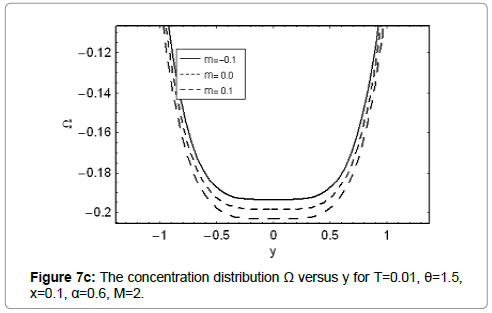 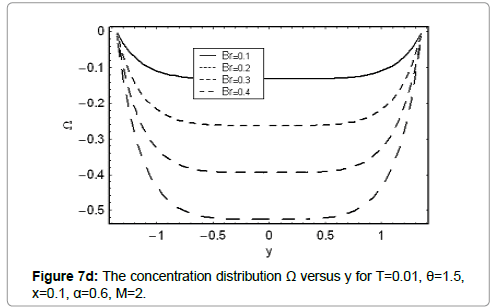 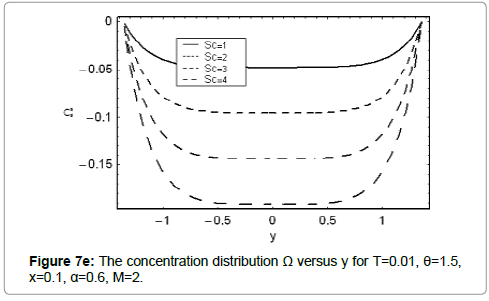 The peristaltic flow of fourth grade fluid has been examined in a non-uniform channel. Analysis is presented when an induced magnetic field, heat, and mass transfer effects have been accorded. The main observations have been summarized below.

• Both pressure gradient and pressure rise are smaller for the divergent channel (m>0).

• Pressure gradient and pressure rise are decreasing functions of Γ.

• The magnitude of velocity is an increasing function of Γ at the Centre line of the channel.

• The magnitude of current density profiles has a decreasing effect for Γ.

• The temperature distribution increases with increasing values of Γ,M and Br near the walls of channel.