Prevalence studies of schizophrenia in India report rates of between 1.5 per 1000 and 2.5 per 1000. There appears to be no consistent difference between rural and urban areas in the frequency of the illness, and no clear pockets of high or low prevalence. Incidence studies are few, with estimates of an annual incidence of 0.35-0.38 per 1000 in urban populations and 0.44 per 1000 in the rural population [3-5].

Several guidelines exist for rational prescription for schizophrenia, including an Indian guideline. Nevertheless, prescribing in real-world settings often differs from suggested guidelines. High-dose antipsychotic use is not supported by evidence of clinical efficacy and is linked to adverse effects, including risk of sudden death. Anticholinergic agents alleviate neuroleptic-induced extrapyramidal side-effects, but have adverse cognitive effects, alter absorption of other oral medications and have abuse potential. Short-term, as-required use prevents extrapyramidal side-effects in the vast majority of patients, but routine use is nonetheless commonplace.

The rising trend toward polypharmacy in schizophrenia care, which is not supported by current guideline recommendations, warrants critical appraisal [6]. Polypharmacy may also increase the risk of adverse effects, drug interactions, noncompliance, and medication errors. Polypharmacy, is strongly discouraged in treatment guidelines, but typically found in 25% of out-patient attendees [7]. In recent years, the arrival of atypical antipsychotics for treating patients with schizophrenia has received considerable attention. Given the severe side effects associated with many of the older antipsychotics, the introduction of atypicals, which appear to produce far fewer extrapyramidal side effects and show properties associated with reduced negative symptoms, has been greeted enthusiastically by psychiatrists and consumers [8].

Haloperidol was the most frequently prescribed antipsychotic agent in the 1980s and early 1990s. Clozapine was just beginning to be used for treatment-resistant patients during this period. In the mid-1990s, newer atypical antipsychotics such as risperidone (1993) and olanzapine (1996) were introduced for the treatment of schizophrenia [9]. A study by Wang et al. in the year 2000 suggested that atypicals made up more than 50 percent of the antipsychotic medication market based up on a recent review of clinical trial evidence, participants in a National Institute of Mental Health workgroup concluded that atypicals were more effective than traditional antipsychotics and should be considered as the first line of treatment for patients with schizophrenia and the share of expenditures for drugs for mental health is increasing [10]. It is therefore essential that psychotropic medication patterns of schizophrenia patients in public sector programs be monitored to ensure equity and appropriateness of treatment [11]. It is essential to monitor the psychotropic medication patterns of schizophrenia patients to ensure equity and appropriateness of treatment. Thus there is a need to study the distribution pattern of schizophrenia and surveillance of treatment pattern in order to gain an insight into current prescribing practice.

The study was a prospective medical record review conducted at the Department of Psychiatry at Kasturba Hospital, Manipal, a 1472 bed hospital. Following a standard protocol all the 139 schizophrenic Patients admitted in Psychiatry ward during the period from August 2006 to May 2007 with a diagnosis of schizophrenia were included in the study. A written informed consent in local language (Kannada and Malayalam) and English was obtained from the patient or care providers. The Cases of schizophrenia were identified and data on treatment pattern were collected from medical records to study the pharmacotherapeutic drug treatment pattern. Demography of the patients like age, sex, family history, ICD–10 sub class, outcome as clinical status of patient at the time of discharge and length of hospital stay were also studied. This study systemically explored the trends in schizophrenia and the pharmacological treatment in a tertiary care hospital. This is a naturalistic observational study, which provides drug utilization data in the context of real-world clinical practice. Such data are likely to represent the evidences of effectiveness during day-to-day practice than randomized trials. 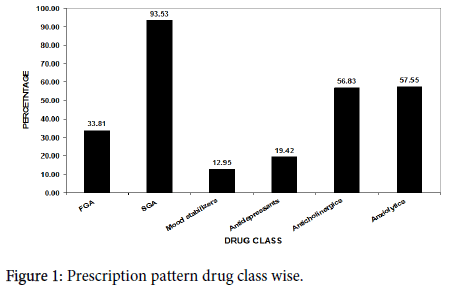 This study systemically explored the trends in schizophrenia and the pharmacological treatment in a tertiary care hospital. This is a naturalistic study, which provides data in the context of real-world practice. Therefore, such data are likely to be more representative of day-to-day practice than randomized trials. The gender wise distribution showed that males predominantly had schizophrenia with 59.41% males and 40.59% females. This observation is similar to a study by Dutta et al. carried out in the year 2003 in Uttaranchal, India and Andor et al. study in the year 2003 in Switzerland. The male to female ratio was found to be 1.46: 1 but a study conducted by Padmavathi et al. in Chennai showed a male: female ratio of 1.06: 1 in the year 1986 [3,12,13].

The average age among the patients was 34.44 ± 11.94 y, which is similar to other Indian studies by Chaudhary et al. in the year 2004 in Assam and Padmavathi et al. study in Che Age distribution showed that higher numbers of patients belonged to the age group 21-30 y as supported by Welham et al. in the year 1991 in Australia [3,14,15].

Majority of the patients 58.99% were unmarried which is similar to studies by mallinger et al. New York and Rosenheck et al. whereas study in USA by Ren et al. in the year 1999 showed a higher percentage of unmarried patients (76.3%) [16-18]. Previous reports suggest that the percentage of schizophrenic patients, who get married, is usually lower than normal individuals or those with other psychiatric disorders. The low marital rates may be attributed to the poor premorbid adjustment impairing the development of relationships, social and occupational disability arising due to the illness, besides the clinical symptoms and early age of onset [19-22]. An association between mental illness and marital problems has been documented by Indian studies too. However a study from India reported that 70% of their first episode patients were married and 80% of the marriages were intact on follow up for up to 10 y [23-25].

The average length of hospital stay for all the 139 patients was 12.37±8.4 days with a minimum period of one day to a maximum of 46 days. Assessment of outcome at discharge showed that majority of the patients 128 (92.09%) improved at the time of discharge. There was no statistical significant association between gender, age and subtype of schizophrenia with the hospitalization period of the patients.

The present study is in accordance with the current trend of SGA prescription which was expected.

Study conducted by Weissman et al. at Veteran’s Healthcare Administration, New York had shown prescriptions for SGAs increased from one–third of antipsychotic prescriptions for patients with schizophrenia to more than one half of the prescription in 2000 [30]. Our findings of higher prescription rates of SGAs are similar to the recommendations made by current treatment guidelines in which SGAs are the first choice in the treatment of schizophrenia. Study by Andor et al. showed that 31.4% of patients received FGAs which is also similar to the present study in which 33.81% patients were prescribed FGAs. Study conducted by Weissman et al. show a rapid decrease in prescription of FGAs from 61% to 44% between the years 1988 and 2000 [13,30].

Antidepressants were prescribed for 19.42% of patients which was similar to study by Andor et al. in the year 2003 in Switzerland which shows 22.2% of prescriptions among schizophrenic patients, contradictory results are reported by Clark et al. study which shows an increased in usage of antidepressants among schizophrenic patients from 18.5% in 1995 to 35.6% in 1999 and Acquaviva et al. in the year 2002 in France showed 51.1% antidepressant prescriptions which was higher than that observed in the present study [13,29,31]. The reason for the decrease in antidepressant prescriptions may be due to greater effectiveness of SGA on depressive symptoms.

Among mood stabilizers lithium was prescribed maximum, for 4.32% patients. Lithium does not enhance antipsychotic effect, but may improve labile affect and agitated behavior in selected patients. However a recent meta-analysis showed that the effect of lithium as an augmentation agent seems to be inconclusive [2].

Clozapine was prescribed for 16.55% of patients. Study conducted by Weissman et al. and Essock [30]. The study of Essock SM had shown a decrease in the prescription of clozapine, this may be because of safety concerns and the need for white blood cell monitoring, it is generally recommended by TIMA antipsychotic algorithm (2003) that patients be tried on two new SGAs as monotherapy before proceeding to a trial of clozapine [28].

Among FGA tab haloperidol was prescribed maximum 22 (15.83%) patients similar to study by Acquaviva et al. [31] in the year 2002 France and study by Fourier et al. in the year 1996 in France [36]. Haloperidol is a potent antipsychotic drug but has a high propensity to cause adverse effects. Where there is no treatment option, use of haloperidol to counter the damaging and potentially dangerous consequences of untreated schizophrenia is justified. However, where a choice of drug is available, clinicians may wish to prescribe an alternative antipsychotic with less likelihood of adverse effects such as Parkinsonism, akathisia and acute dystonias [37].

Benzodiazepines are used for a variety of purposes in schizophrenia including anxiety, agitation, disruptive behaviour, motor disturbances and sometimes also for the augmentation of antipsychotic therapy to alleviate positive symptoms. Addition of a benzodiazepine to an antipsychotic may be as acceptable as antipsychotic monotherapy for people with schizophrenia. The effectiveness of benzodiazepines to calm acutely ill patients early in treatment has been documented [39]. Among anxiolytics tab lorazepam was prescribed maximum (48.92%) similar to study by Magliano et al. in Italy during the year 1998 [40].