Objective: Aim of the study was to determine the prevalence of anatomical variations of nose and paranasal sinuses based on the findings seen on computed tomography.

Methodology: CT SCAN of the patients with sinonasal symptoms was performed for evaluation of the anatomical variants of nose and paranasal sinuses. The sections were then analysed for anatomical variations. The data collected was subjected to statistical analysis.

Conclusion: It is very important to recognize the clinical and surgical significance of these variations. Thus, prior to FESS, imaging with CT scan is mandatory to evaluate the anatomy of PNS and its variations.

Chronic rhinosinusitis (CRS) remains a common cause of morbidity and impaired performance at school or workplace. Chronic rhinosinusitis, in addition to physical discomfort, also causes a substantial economic burden to patient in terms of missed workdays due to physician or hospital visits [1,2]. A definitive diagnosis and timely intervention can reduce morbidity due to this disease. The complicated radiologic anatomy of the lateral nasal wall together with the most important anatomical variations is demonstrated and the underlying pathophysiologic principles of chronic recurrent sinusitis are discussed [3]. Computed tomography (CT) is the method of choice for evaluating these cases, particularly in patients, requiring surgical intervention [4]. It is also used to create intraoperative road maps.

Endoscopic surgery demands a meticulous assessment and a detailed description of both nasal and paranasal sinuses [5]. Mastery of sinus anatomy and its variant features forms the basis from which radiologic interpretation begins. Familiarization with the radiologic landmarks and cross-sectional anatomy on patient CT scans, along with clinical correlation, can further enhance the reader’s ability to understand sinus CT findings. In addition to reviewing the scan to determine the presence of disease, CT scans of the sinuses can also be reviewed to evaluate potential areas of occlusion and variations of the patient’s sinus anatomy in the setting of surgical planning.

Patients attending the OPD of ENT department of DR.BABA SAHEB AMBEDKAR MEMORIAL HOSPITAL, MUMBAI were evaluated for the signs and symptoms of nose and paranasal sinuses pathologies. The patients having positive findings suggestive of nose and paranasal sinuses pathologies on clinical examination underwent diagnostic nasal endoscopy with 0 degree rigid Hopkins endoscope of Karl Storz. CT SCAN of the above patients was then performed for evaluation of the anatomical variants of nose and paranasal sinuses. Coronal sections were performed with the patients in prone position, with extended neck and the plane perpendicular to the infraorbitomeatal line. 1 mm cuts are taken from frontal sinus anteriorly to the sphenoid sinus posteriorly. The sections were then analysed for anatomical variations. The data collected was subjected to statistical analysis. 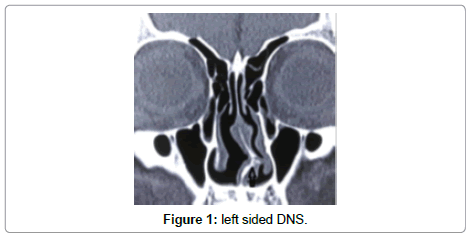 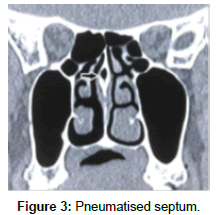 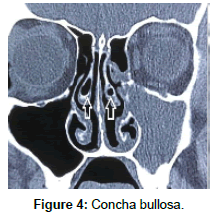 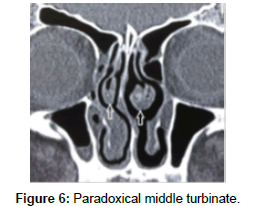 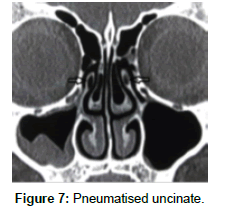 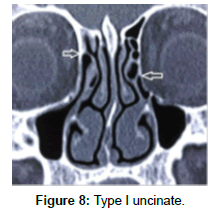 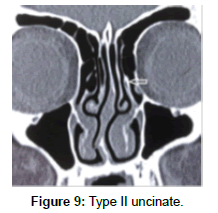 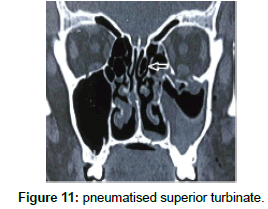 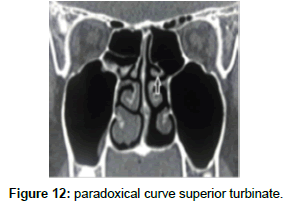 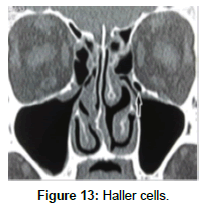 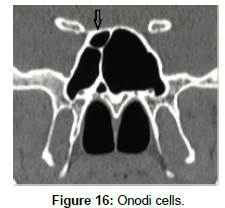 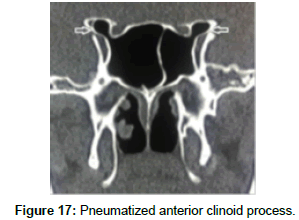 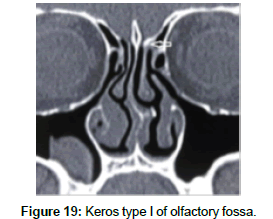 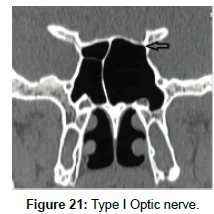 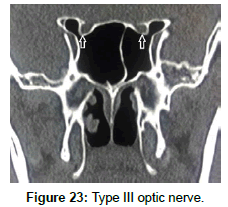 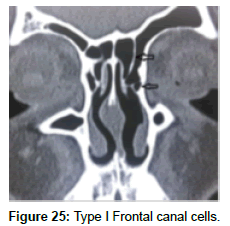 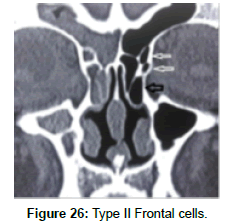 The success of functional endoscopic sinus surgery (FESS) depends on adequate knowledge of anatomy of paranasal sinus, which is variable. It is very important to recognize the clinical and surgical significance of these variations. Computed tomography of the paranasal sinus has improved the visualization of paranasal sinus anatomy and has allowed greater accuracy in evaluating paranasal sinus disease.