Introduction: Vitamin D is essential for all cells of human body for proper function. It is very important for building bones and muscles. Deficiency of Vitamin D might leads to “Osteoporosis” (loss of bone density), poor immune function, migraines, week and achy muscles, fatigue, thinning hair and brittle nails. Cancer is also a serious disease which is linked with deficiency of vitamin D. Sunlight is the most important and naturally available source of this vitamin. Our kidneys must convert it to its active form, Vitamin D1,25. Some foods are also containing Vitamin D, such as milk and some citrus juices.

Objective: The objective of the study was to find out the prevalence of Vitamin D deficiency among general population of Karachi.

Results: 200 samples were collected through which we found that 82.50% were deficient and 17.50 % were normal and as compare to males females are more deficient from level of Vitamin D in their blood.

Conclusion: According to our survey we can conclude that there is a more percentage of Vitamin D deficiency in Karachi population and females are more affected from this deficiency. So, there is need from higher authorities to take serious action regarding this problem.

Vitamin D is a steroid in nature that has a hormone-like capacity. It helps in assimilation of calcium and phosphorus from small intestine. Vitamin D which is obtained from dietary sources and from daylight is stored in fat cells and is brought into circulatory framework by combining with vitamin D. Vitamin D (cholecal citerol) is organically in inactive from and must be metabolized to 25-(OH) D3 in the liver and after that to its naturally dynamic shape 1,25-dihydroxycholecalciferol [1,25-di (OH)D3] in kidney [1,2]. Vitamin D3 serves to controlling the capacity of more than 200 genes which are responsible in many functions i.e. in cell multiplication, apoptosis, separation and angiogenesis [3-5]. The predominant type of vitamin D in plasma and the significant storage is vitamin D3 [2].

The vitamin D initially distinguished in 1921, it has two principle types. These two types are called Vitamin D3 and VitaminD2. Vitamin D3 is otherwise called cholecalciferol and Vitamin D3 additionally called ergocalciferol all things considered both these sorts are called calciferol [6]. The most important Vitamin D metabolism which can be evaluated in the blood is the 25 hydroxyvitamin D (25-OHD). Daylight introduction is the most essential and freely accessible source of vitamin D7 dehydro cholestrol exhibit in skin which is by the presentation to UV lights show in daylight changed to cholecalciferol (Vitamin D3). Vitamin D deficiency is related with secondary hyper parathyroidism with ensuing ill effects on bone mineral density [7]. The fundamental driver of vitamin D deficiency is improper diet, poor calcium intake, social customs , children and female population diverts from the sunshine due to closed houses this also cause vitamin D deficiency [8]. The basic reasons which can cause vitamin D3 deficiency in humans are overweight hypertension, diabetes mellitus, depression, chronic fatigue syndrome, fibromyolgia osteoporosis etc. Cancer is a serious disease which is related with lack of vitamin D [9]. Vitamin D inadequacy is found in all ages including children and adults in all over the world with the some variation on different countries. In Pakistan, the quantity of inadequacy of vitamin D expanded yet this issue still not tackled in light of the fact that consideration not given by the higher authorities and nor by the individuals. The basic reason for the problem is that people don’t have enough knowledge and lack of maintainacne of vitamin D in the body. Vitamin D deficiency founds in all across Pakistan in all ages. In Karachi, the issue of vitamin D insufficiency has not settled yet! The motivation behind this study is to check the prevalence of vitamin D deficiency general population of Karachi. The natural source of vitamin D is ultra violet light which is found in skin, and other dietary sources are egg yolk, fish, butter and milk [10].

The after effect of Vitamin D insufficiency upon the skeleton are notable [11]. In adults consistently inadequacy of vitamin D related to osteomalacia [9,12,13]. While lesser deficiency prompts to non-specific manifestations [9]. Vitamin D inadequacy in post-menopausal women prompts to early onset of osteoporosis. Vitamin D inadequacy additionally prompts to rickets in newborn children and youngsters, in more established grown-ups it cause osteomalacia because of loss of bone thickness makes agony and delicate quality of bones [14]. Many studies showed that the lacking of vitamin D raised the danger of fracture in more established grown-ups, and these studies elaborated the vitamin D supplementation can keep these sorts of fractures as it’s taken in a sufficiently high doses [1,13]. Vitamin D is found in plants and a few fishes while vitamin D is synthesized in skin from introduction to daylight. The major two ways by which vitamin D3 deficiency can overcome is through food which is rich in vitamin D3 like mushrooms and sea foods and second is exposure to sunlight.

After the sunlight, diet is the second main source of vitamin D, some foods are rich in it. The foods which contain rich amount of vitamin D are oily fishes like salmon, irradiated mushrooms, sardines and mackerel. Some nutritionists also said that egg yolks also contain vitamin D but it amounts are highly variable that’s why this is poor source of vitamin D and it also contain large amount of cholesterol, cod liver oil, traditionally it was known as that it is essential for healthy bones. Very few foods enriched from vitamin D this includes milk. It contain 100 IU per 8 ounce serving, orange juice have 100 IU per ounce serving and other juice items and some breads and cereals also contain vitamin D [15].

The cross sectional study was conducted from October 2016 to December 2016, at the Department of Serology and Immunochemistry, Dr Essa Laboratory Karachi. Amid the examination time frames 200 specimens were gathered from various areas of Karachi. Around 3 ml blood was gathered in separate gel tubes. Finally the serum was isolated through centrifugation at 4000 rpm. The test principle is based on CLIA (Chemiluminesence) technique.

Study was designed on 200 subjects in 63 were male, 128 were females and 09 were children (less than ten years). Patients were set in two classifications as per the amount of vitamin D introduce in their blood, in particular deficient (<30.0) while normal (30-150). As compare to male females has more deficiency of vitamin D 82.50% females which are deficient while 17.50% males were suffering from deficiency of Vitamin D. The outcomes of the study have been summarized in below (Table 1, Graph 1). 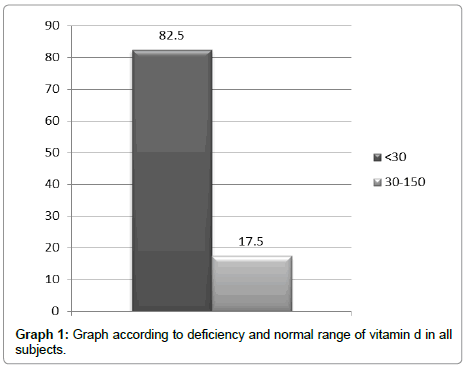 Graph 1: Graph according to deficiency and normal range of vitamin d in all subjects.

There are many components which raised the lacking of vitamin D in all through the world. The components which incorporates are less exposed to daylight, age and poor diet routine. Vitamin D insufficiency is found among both grown-ups and kids [16]. There are a few confirmations which drives the relationship of vitamin D lack with high plausibility of different maladies like diabetes mellitus (both types 1 and 2), cardiovascular disease, and malignancy, especially of the digestive tract and prostate [16,17]. The deficiency of Vitamin D additionally responsible for secondary hyperparathyroidism [18,19]. The aftereffects of vitamin D levels are likewise utilized as an assessment of bone metabolism. It has been observed that Vitamin D deficiency connected to an increased defenselessness to many chronic diseases, for example, high blood pressure [20-25]. Periodontal sickness, multiple sclerosis [24]. Perpetual pain, depression, schizophrenia, seasonal disorders, peripheral artery disease [26]. Vitamin D supplements are utilized to improve the muscle quality, strength and diminish the fall rate by around half [20]. In patients whose vitamin D level is <10 ng/ml, the clinicians endorse a measurements which incorporates a 50,000 IU of vitamin D orally once per week for 60- 90 days, or 3 times each week for 30 days. Our study demonstrated a high rate of Vitamin D lacks in both male and female. As contrast with male our study finds that females are more deficient from vitamin D. This study was performed in Karachi, in which we gather samples from various locales of Karachi and we found that 82.50% females were deficient compared to 17.50% males. Another study from Faisalabad region of Pakistan reported the most astounding deficiency of Vitamin D in females. This review exhibited that around 87% pregnant ladies were experience the ill effects of Vitamin D deficiency, 10% were having Vitamin D inadequacy while just 3% had ordinary levels [22]. Another study from Karachi demonstrated that 305 premenopausal females, have 90.1% vitamin D deficiency [23]. Predominance of high level of Vitamin D deficiency in females as contrast with males might be due to closed houses, because house wives are involved in domestic work at home so they are not exposed to sunlight. The absence of awareness in regards to healthy diet and the overcooking of food are a couple of other contributing elements to the predominant vitamin D inadequacy. There is need from higher authorities to take serious action from this problem and provide proper food and conduct awareness programs regarding Vitamin D deficiency.

This study showed that high percentage of general population of Karachi suffers with deficiency of Vitamin D, as compared with males females are more affected from this problem whether they belong to any age group. So there is needed to take serious action to solve this problem.