The purpose of this paper is to understand and predict statistical model of India’s military spending. The paper examines the influence of defense expenditure of China and Pakistan on India’s military expenditure. The paper also analyses China and Pakistan’s arms import of key technologies related to Air defense, Aircrafts, Missiles etc. as key factors for understanding India’s defense spending. The other important factor - GDP of India is also taken as an independent variable for predicting India’s military expenditure pattern. Using SPSS regression, the paper attempts to form a model having India’s Military Expenditure as dependent variable and Chinese Defence expenditure, Pakistan’s defense Expenditure, military import of Pakistan, Military import of China, GDP of India as independent variable. The military expenditure data of SIPRI from 1988 to 2014 has been used to predict the mathematical model of spending. The import data of Technologies is also sourced from SIPRI’s trade register. India’s GDP has been taken from World Bank and IMF. Stockholm International Peace Research Institute (SIPRI) is an independent international institute in Sweden, dedicated to research into conflict, armaments, arms control and disarmament. Established on 6 May 1966, SIPRI provides data, analysis and recommendations, based on open sources, to policymakers, researchers, media and the interested public

SIPRI defines military expenditure as all current and capital expenditure on the armed forces (including peace keeping forces), defense ministries and other government agencies engaged in defense projects, paramilitary forces when judged to be trained, equipped and available for military operations, military space activities etc. The expenditure can be in form of personnel salary, operations and maintenance, procurement, military research and development, military construction, military aid (in the military expenditures of the donor country) etc.

Many theories have been built to understand issues related to military spending. The significant among them are Keynesian theory of military spending, Marxian theory, Mearsheimer’s theory and Kenneth Waltz Defensive Realism Theory [1-6].

The Keynesian theory explains that military spending is just a component of public expenditure which creates a multiplier effect in the entire economy. Military expenditure generates employment, shifts demand, utilizes existing capacities and encourages private investment. Influence of military expenditure on civil sectors such as ports, roads, bridges, power, education and technology development can be understood using Kenynesian perspective of defense spending. Marxian theorists also argue on similar line with slightly different viewpoint. According to this theory, by utilizing surplus labour and surplus capacities, capitalist class increases its profit, which in turn fuels consumption and investment. Interests of Monopolists groups which provide key input to defense production also get furthered by increase in defense spending. Thus, defense spending is a tool in hand of capitalist class to serve their concern.

Apart from economics related theories, there are theories based on security and defense concerns of countries which give a framework for justification of military expenditure. As per Mearsheimer’s Offensive realist theory, anarchy in international system encourages the great powers to pursue hegemony and maximize military capability to ensure their survival against other states. Such pursuit among powers increases military competition resulting in enhanced defence expenditure and severe arm race. Departing from offensive realist explanation, the Defensive realism theory conceives that states follow moderate & defensive policies, and, increase their military expenditure to defend themselves in anarchic environment of international system. This theory argues that states are not intrinsically aggressive and their prime concern is not to maximize power but to sustain their position in world system.

The paper attempts to explain defence spending of India by predicting a statistical model. The case of India is very complex owning to various security and economic factors prevailing at regional and global level. India is one of fastest growing economies of world facing severe competition from China, both economically and militarily. The hostility of Pakistan and India towards each other is also well known. Terrorist threats, separatist’s movements across country and boarder disputes have severely compounded the situation of India. The global trend of past few years shows that the military expenditure has witnessed minor increase in the United States and Western Europe while, it has increased considerably in in Asia, Africa, Eastern Europe and the Middle Eastern countries. In Asia, China continues to occupy number one position followed by India and Japan, in terms of total military expenditure. The study uses a multiple regression model to determine the factors that influences military spending of India. The study examines influence of different factors on India’s military spending such as GDP of India, Defense spending of China & Pakistan, import of key military technologies by China & Pakistan.

After reviewing available research papers on India’s military spending it is found that there are no papers which have focused on predicting military spending using a statistical model. It is also found that some of the researches focused on predicting defense expenditure of India have used only economic factors such as GDP of the country and its neighbors as key factors and have completely ignored relevance of import of key military technologies such as armored vehicle, Artillery, Aircraft, Air Defense systems, missiles and naval weapon etc. in predicting India’s defense expenditure. Given that India is a military technology deficit region and it primarily depends on import of these technologies from developed countries such as USA, France, Russia, and EU, it becomes imperative to consider technology import as one of the key factors to predict India’s defense expenditure. The above gaps have given us the scope to come out with a statistical model which can be used to predict military spending of India. As part of the modelling all the factors which were ignored in previous research are also considered [7-11].

The historical data for all the variables are taken from SIPRI1. The data is available from year 1988 to 2014. The graphs below depict the comparison of defense import data for China, India and Pakistan. As it is evident from the graph below, the defense import of India has been increasing continuously from year 1990 to 2015 due to its high dependence on import [12-14]. China, on the other hand, has been showing a steep decline in its import from mid-2000 onwards because of the growth of its indigenous manufacturing (Graph 1). Similarly, import of China, India and Pakistan with respect to country’s total expenditure is depicted in the graphs below. As it can be inferred from the graph, contribution of import in country’s total defense expenditure is high in case of India and Pakistan and low in case of China (Graphs 2-4). 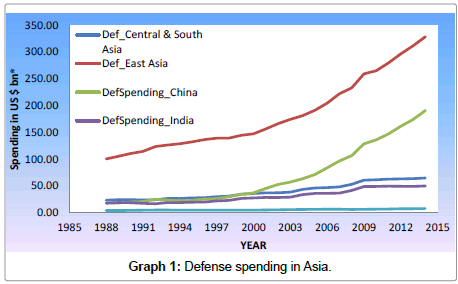 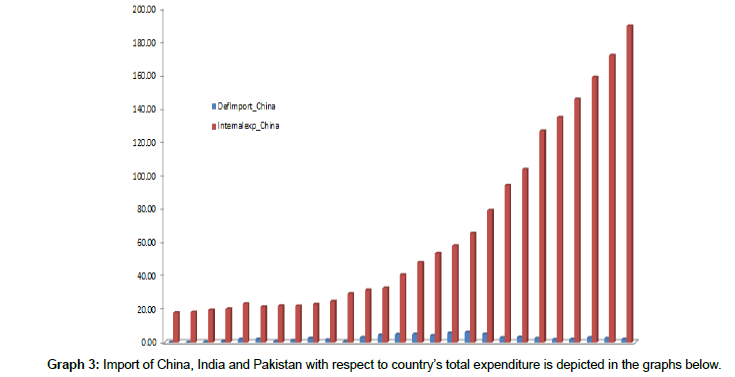 Graph 3: Import of China, India and Pakistan with respect to country’s total expenditure is depicted in the graphs below.

Graph 4: As it can be inferred from the graph, contribution of import in country’s total defense expenditure is high in case of India and Pakistan and low in case of China.

Table 1: It is evident from different theories.

Table 2: Final list of variables considered for deriving the statistical model is listed as below. 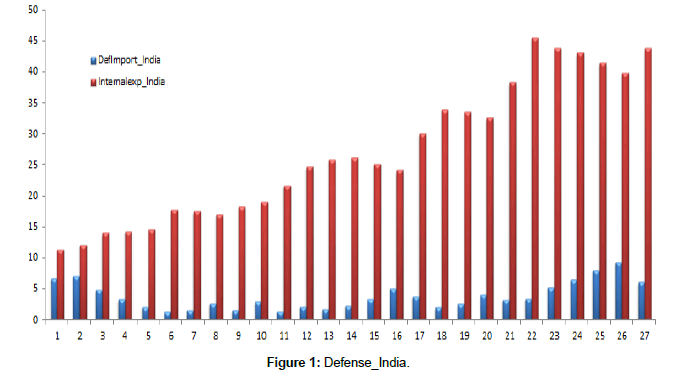 The statistical model is expected to produce following equation for defense spending of India:

DefSpending_Pakistan does not influence DefSpending_India significantly Null Hypothesis: H 0: b4 = 0

GDP_India does not influence DefSpending_India significantly Null Hypothesis: H 0:: b5 = 0

IBM SPSS is used as the tool to derive the regression model.

Following are the results of the stepwise regression:

The descriptive statistics of the data is as below

Table 3: The descriptive statistics of the data is as below.

Table 4: After running stepwise regression we get five models to predict the defence spending of India. This table represents the multiple correlation analysis.

Table 5: It is also observed that value of R square is 0.980 & adjusted R square is 0.976, thus having little difference, thus available data is adequate to explain the behavior. 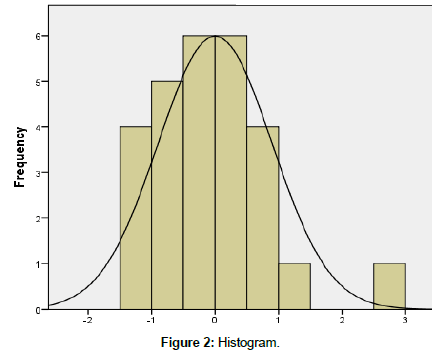 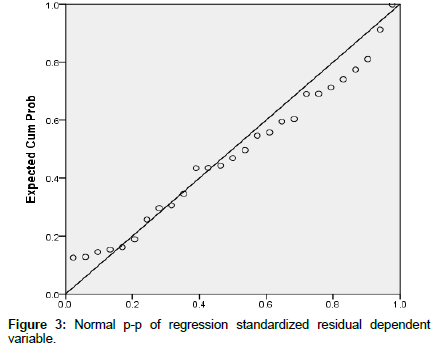 The final regression equations can be formed as follows:

It is clearly evident from analysis that defence expenditure of India depends upon a number of economic, military and security factors. Regression equation reveals that India’s defence spending is significantly influenced by Chinese security expenditure. However, it is also beautifully depicted that defence expenditure of India is not centered on Pakistan. The negative correlation with Pakistan defence expenditure unambiguously reinforces such notion. Undoubtedly, India perceives China as its competitor and centres is military preparedness around it. Further, it is important to note that arms import of both these countries, China as well Pakistan, is strong predictor of India’s defence outlay pattern. This is very much understandable. Being a defence technology deficit region, all these countries depend on import of critical technology for strengthening their military might. Thus, it is obvious that arms import by China and Pakistan compels India to do the same, resulting in increase of its military budget. The findings reinforce the fact that Indian defense spending follows both Mearsheimer’s Offensive realist theory [6] and Kenneth Waltz Defensive Realism Theory [7] which argues that states possess offensive/defensive military capabilities to maintain their survival against hostile states. Apart from military/ security concerns, economic rise of India has also contributed towards swelling of its arms budget. Positive correlation between Gross Domestic Product and defence expenditure clearly supports this claim. Obviously, defence spending is component of public expenditure that is creating a multiplier effect in economy of this country. Finally, it can be concluded that India’s military spending cannot be explained by any specific theory but through a complex combination of Keynesian, Marxism [4], Mearsheimer’s Offensive Realist and Kenneth Waltz Defensive Realism theories. The graph above plots Residuals versus Predicted DefStanding_India data. The application of Multiple Regression on a set of data is based on an assumption that states that the residuals are normally distributed at each level of DefStanding_India. The plot, as one can see above, is normal. Hence, the assumption holds good in this case. Normal P-P Plot of Regression Standardized Residual Values helps us understand Heteroscedasticity. The values are expected to either coincide or be very close to the reference line. The above plot would indicate very minor deviations of the expected values from the observed values of the dependent variable.