Amyand’s hernia is a very rare hernia defined as the presence of the vermiform appendix within the inguinal hernia. Few cases of left-sided involvement have been described, and have been mostly been attributed to male children. We present a case of a 76-yearold female who developed peritonitis from a ruptured small bowel proximal to a left-sided Amyand’s hernia. Physical exam showed findings suggestive of a strangulated inguinal hernia on the left, which was confirmed by imaging. The proximal bowel was dilated and ruptured expunging fecal material into the abdomen leading to septic shock. Immediate surgical exploratory laparotomy revealed extensive succus entericus with fecal material throughout abdominal cavity and a strangulated hernia sac in the left inguinal canal consisting of the terminal ileum, cecum, and appendix. The hernia was reduced and repaired, the appendix, terminal ileum and cecum was resected, a stapled ileo-ascending colon anastomosis was performed, and intra-abdominal stool and free fluid were evacuated. Less than twenty cases worldwide of a leftsided Amyand’s hernia have been reported in the literature. To our knowledge, this is the first reported case in the North America of a strangulated left-sided Amyand’s hernia.

Amyand’s hernia was first described in 1735 by Claudius Amyand, a Serjeant Surgeon to King George, in an 11-year-old male during an appendectomy [1]. The presence of the vermiform appendix within an inguinal hernia is what distinguishes it from a De Garengeot hernia, where the appendix is in the femoral canal [2]. The overall incidence of Amyand’s hernia ranges from 0.19 to 1.7% with the majority being children. In adults, the rate of amyand hernias in adults was found to be 0.28 to 1% [3] and the incidence of an inflamed appendix within the hernia is 0.07 to 0.13% [4]. Only a few cases of a right-sided appendix herniating through the left inguinal canal has been reported. It is proposed that left-sided Amyand’s hernias are associated with situs inversus, intestinal malrotation, or a mobile cecum. Although Amyand’s hernia is three times more likely to appear in children than adults, due to the patency of the processus vaginalis, it has been reported in patients aged 3 weeks to 92 years [4]. Mortality has been reported to be between 14-30% and has been associated with peritoneal spread of sepsis [4]. Sharma et al. reported a lower mortality rate of 5.5% that was attributed to early appropriate treatment and good postoperative care.

A 76 year-old hispanic lady (BMI: 19.38) with a past medical history significant for poorly controlled diabetes mellitus type II presented to the emergency department with an acute abdomen. Her pain started a week prior and was progressively worsening, which prompted her to come to the emergency department. Her last bowel movement was 4 days prior to admission without hematochezia. On admission, the patient was experiencing nausea, vomiting, chills, altered mental status, and decreased appetite. Her vitals showed a maximum temperature of 37.5°C with a heart rate of 101 beats per minute, respiration rate of 18 breaths per minute, and blood pressure was initially 57/33 mmHg which was stabilized to 118/55 mmHg after resuscitation with intravenous (IV) fluids. She was saturating at 96% on room air. Her labs showed a white blood cell count of 2.5 thousand/uL, bicarbonate of 19 mEq/L, glucose of 200 mg/dL, anion gap of 18, BUN 26 mg/dL, creatinine of 1.2 mg/dL, and lactic acid of 4.7 mMol/L. On physical exam, the patient appeared cachectic and in moderate distress. Her abdomen revealed absent bowel sounds and was distended, rigid, tympanic to percussion, and diffusely tender to palpation. Subsequent chest X-ray revealed pneumoperitoneum (Figure 1). Computed tomography (CT) scan of the abdomen and pelvis with contrast revealed small bowel proximal to the terminal ileum within the left inguinal ring (Figures 2a and 2b). Multiple loops of small bowel demonstrated decreased wall enhancement with ischemic changes. There was also a large amount of free fluid in the abdomen. We had a high suspicion for a perforated small bowel obstruction due to incarcerated and strangulated left inguinal hernia. The peritonitis led to septic shock, therefore she was stabilized with 6 L of IV normal saline, pressors, and piperacillin/tazobactam. The risks, benefits, complications, and alternatives were discussed with the patient and her family, in which they chose to proceed with surgery. 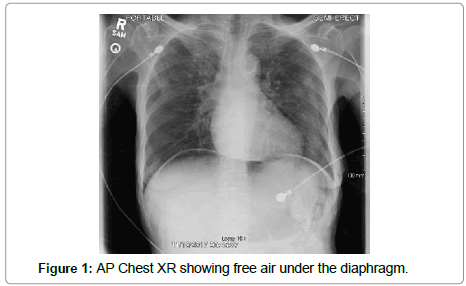 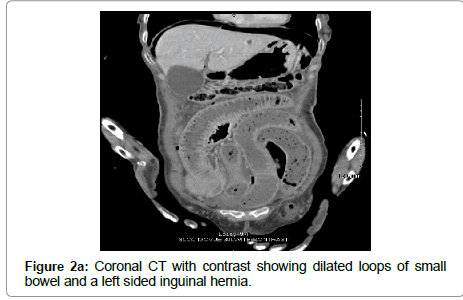 Figure 2a: Coronal CT with contrast showing dilated loops of small stapler (Medtronic) was used to complete the anastomosis (Figure 4c). The bowel and a left sided inguinal hernia. 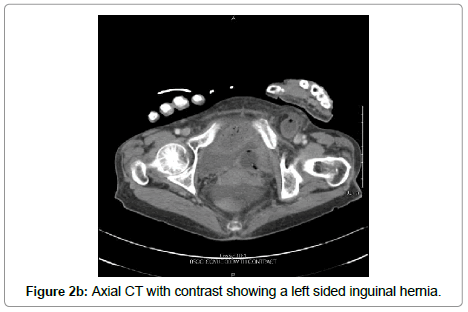 The patient was taken to operating suite, prepped and draped in a sterile fashion. A transverse incision 1 cm above the inguinal ligament exposed a strangulated hernia sac, which was then resected (Figure 3). Then, a midline incision was made through the abdominal fascia, where she was found to have extensive succus entericus and fecal material throughout intra-abdominal cavity. This was copiously suctioned and evacuated with laparotomy pads. A forcep was applied to the area of perforation to control the leak. About 15 to 20 cm of the distal ileum, appendix, and cecum was necrosed and strangulated in the left inguinal canal (Figure 4a). The patient appeared to have a very unusual finding of cecal bascule, where the cecum is floating freely. The hernia was reduced and necrotic bowel was resected (Figure 4b). Copious irrigation with 10 L of warm saline was performed until the return of fluid was semi-clear. A primary repair of the left inguinal hernia was achieved using 0 PDS suture (Ethicon, Somerville, NJ) in an interrupted fashion. An ileo-ascending colon anastomosis was done using a GIA stapler (Medtronic, Minneapolis, MN) and TA60 stapler (Medtronic) was used to complete the anastomosis (Figure 4c). The mesenteric defect was closed using 2-0 silk suture in an interrupted fashion. The abdomen was copiously irrigated again until the return fluid was clear. The fascia was closed with 0 PDS suture in a running fashion and the skin was loosely approximated with staples. The left inguinal incision was irrigated and closed using 0 PDS suture in an interrupted fashion without a mesh. A Penrose drain was applied to control the sepsis. A sterile dressing was applied, and the patient remained intubated in the recovery room. Figure 3a: Gross specimen of the resected strangulated hernia sac. Figure 4a: Intraoperative photograph of the ischemic bowel prior to resection. 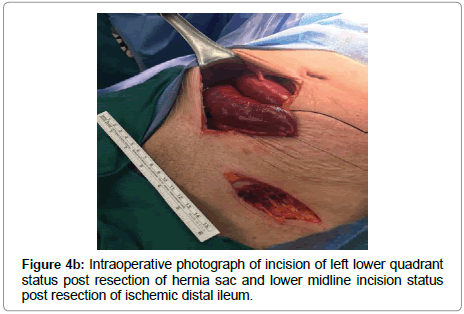 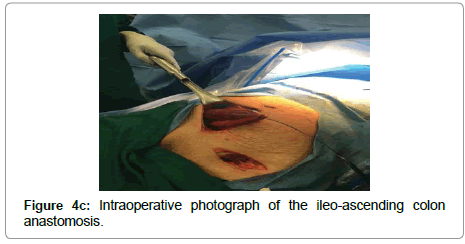 Gross pathological examination of of the resected specimen showed ischemic small bowel with decreased mucosal folds and a thin wall measuring 1 mm to 2 mm in thickness. A second specimen of small bowel was dilated and measured 10 cm by 4 cm with a 4 cm perforation 3 cm from the closest resection margin. The appendix measured 4.3 cm by 0.4 cm with a congested mesoappendix. The microscopic pathological examination of sections showed a segment of small bowel with superficial epithelial necrosis and mucosal sloughing. A segment of dilated, perforated small bowel demonstrated focally denuded mucosa, lamina propria edema, and serosal hemorrhage. The appendix revealed signs of serosal congestion and hemorrhage without significant inflammation. The hernia sac demonstrated congested fibrofatty tissue lined by mesothelial cells surrounding hemorrhagic small bowel. No dysplasia or malignancy was identified.

Left-sided Amyand’s hernias are rare, because the appendix is usually on the right. Possible underlying mechanisms of a leftsided Amyand’s hernia are due to mobile cecum, cecal bascule, situs inversus, and intestinal malrotation [5,6]. A mobile cecum is caused by the failure of the right colonic mesentery attaching to the lateral peritoneum, leading to an unattached cecum and ascending colon that are free to rotate [7]. In cecal bascule, the base of the cecum folds anteriorly over the ascending colon, which can obstruct the emptying of the cecum [6]. Situs inversus is a rare congenital condition where there is mirror image positioning of the thoracic and abdominal organs. Yoneyama and peers reviewed 14 cases of left-sided Amyand’s hernias with an mean age of 10 months. Eleven (79%) of them resulting from a mobile cecum and only 1 (7%) from situs inversus. Intestinal malrotation is another congenital disorder caused by rotation of the intestines during fetal development. Most are diagnosed within one year after birth in 90% of cases [7]. The incidence of intestinal malrotation in adults occurs between 0.0001 and 0.19% according to Sipahi and colleagues [8].

Amyand’s hernia can be diagnosed preoperatively by imaging, such as abdominal CT or ultrasound [9]. Abdominal CT scans may reveal the vermiform appendix in the inguinal hernia sac and thickening appendiceal wall with fat stranding [10]. Sharma et al. retrospectively reviewed 18 consecutive cases of Amyand’s hernia with a median follow up of 6.4 years. The median age was 42 years (range 12-89) and 17 of the 18 were males. Abdominal X-rays were not sensitive, as 83% of the cases had normal findings. All patients presented with a painful groin lump, 15 (83%) with abdominal pain, 2 (11%) with small bowel obstruction, and 1 (6%) with peritonitis. Due to the variability in clinical presentations, diagnosing Amyand’s hernia can be challenging and most are diagnosed intraoperatively [11].

Management of Amyand’s hernia varies on the patient’s condition, age, gender, and classification. Most left-sided Amyand’s hernias are treated with herniorrhaphy with or without an appendectomy and repair of any serosal tears [1,12]. Of the 14 cases reviewed by Yoneyama and colleagues, all were treated with herniorrhaphy and 8 with a subsequent appendectomy even though only 4 had appendicitis. One of the appendectomies had a surgical site infection, while the other cases had no complications. Some of the concerns for doing an appendectomy include increased risk for surgical site infection, recurrence of the hernia due to the need for a larger incision, and eliminating the use of the appendix in a possible future operation. Ivashchuk reported on cases where laparoscopic technique was used as a diagnostic and therapeutic intervention when the etiology was unclear, but if complications arise then conversion to an open procedure is necessary. Laparoscopic technique is less invasive and is indicated when there the hernia sac is not incarcerated and there is a lack of peritoneal signs [4]. According to the Losanoff and Basson’s classification for Amyand’s hernia (Table 1), the choice to do an appendectomy is usually reserved for types II to IV. This classification system was designed to assess and help manage Amyand’s hernias (Table 1). A type I hernia has a normal vermiform appendix within the hernia sac, and a reduction with mesh repair is recommended. A type II hernia is described as an inflamed appendix within the sac, in which appendectomy through the hernia is recommended. A type III hernia consists of a perforated appendix or peritoneal sepsis, and an open appendectomy is recommended. Lastly, a type IV hernia is complicated by intra-abdominal pathology and should be managed by an appendectomy, full diagnostic workup, and other procedures as appropriate.

Table 1: Classification system by Losanoff and Basson for Amyand’s hernia.

The use of mesh is not recommended in hernia repair for cases of appendicitis or peritonitis because it would increase the risk of sepsis [11]. Eleven (61%) of the 18 patients Sharma and colleagues reported on had a normal appendix and underwent mesh hernia repair without appendectomy. The remaining 7 (39%), 4 (22%) with appendicitis and 3 (17%) with a ruptured appendix, had an emergent open appendectomy with a Bassini’s sutured hernia repair. One patient died of a pneumonia postoperatively and one patient had a recurrent hernia.

Amyand’s hernia is a rare cause of an inguinal hernia and even more rare in the left superficial inguinal canal. Most patients present with vague symptoms typical of an inguinal hernia, unless the bowel is strangulated and perforation occurs [4]. Typically, imaging is not required for the diagnosis of Amyand’s hernia, but our patient presented with an acute abdomen and other etiologies needed to be ruled-out [4]. Although there have been reports of laparoscopic repair for non-strangulated Amyand’s hernia, typical treatment includes herniorrhaphy, appendectomy, and a lower midline laparotomy for suspected cases of perforation [4]. Our patient developed a Losanoff and Basson’s type IV left-sided Amyand’s hernia, necessitating an open laparotomy in conjunction with appendectomy and herniorrhaphy without mesh [13,14].

The etiology of this patient’s hernia was a result of a mobile cecum.

We thank Dr. J. Losanoff and Dr. Paul S. Issack for their input on the paper. 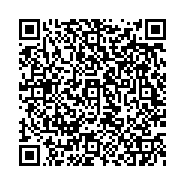