Objective: To study the results of soft tissue sarcoma surgery at the Joliot Curie Cancer Institute in Dakar.

Methods: This was a 3-year retrospective study of all patients undergoing surgery for soft tissue tumors in the upper and lower limbs at Joliot Curie Cancer Institute.
Results: We operated on 16 patients. The average age of patients was 35 years. Female patients were predominant, as they represented 56% of the cases. Sarcoma risk factors was found in 1 patient with type 1 neurofibromatosis. The most frequent localization was the thigh (n = 8). The mean size of the tumor lesion was 11.3 cm. Macroscopic lymph node involvement was found in 5 cases in the groin area, and 1 case in the axilla. Two cases of bone and vascular involvement were found (12.5%). The most common histological type was Dermatofibrosarcoma protuberans (7 cases) followed by spindle cell sarcoma (2 cases). The histological classification found 50% of grade 2 (8 cases). Half of the patients were classified as T2bN0M0. Surgery was conservative in 14 cases. Margins were clear (R0) in 7 cases (44%). Radiotherapy and chemotherapy were given respectively to 2 and 4 patients (12.5 and 25%). After a 10-month follow-up, 4 patients recurred at the tumor site, 4 patients had metachronous metastasis and 5 died.

Conclusion: Soft tissue limb sarcomas are characterized by large sizes at diagnosis. Surgery is the main treatment. Radiotherapy is preferentially adjuvant. Chemotherapy is non-consensual. The quality of surgery is an important prognostic factor.

Surgery is the only curative treatment of limb soft tissue sarcomas [1,2]. The results of surgery are optimized by a combination of chemotherapy and radiotherapy [3,4]. The requirements of a surgery are related to the site of the tumor, its scope, its aggressiveness, its resectability and the possibility of clear margins [5]. The objective of this study was to study the results of soft tissue sarcoma surgery at the Joliot Curie Cancer Institute in Dakar.

This was a retrospective, monocentric study that extended over a 3-year period, from January 1, 2014 to December 31, 2016. All patients operated on for soft tissue tumors in the upper and lower limbs were included. Patients were clinically evaluated at 1 month, 6 months, 1 year and 2 years. The parameters studied were epidemiological, diagnostic, therapeutic and prognostic. We particularly evaluated limb maintenance, surgical margins, recurrence and overall survival.

We found 26 cases of soft tissue sarcomas of the limbs, an average of 8.6 cases per year ; 16 patients were operated on (61.5%).The mean age of the patients was 35 years, with extremes of 17 and 60 years. The age group [31-50] was the most represented, accounting for 56.2% of the cases (Figure 1). The female sex was predominant, with 56% of the cases. The sex ratio was 0.77 in favor of women. The lower limb was the most affected area, accounting for 13 out of 16 cases (81.2%). Only 1 risk factor was found in 1 patient with type 1 neurofibromatosis. The lesions were primary in 7 cases (43.7%) and recurrent in 9 cases (56.3%). Patients consulted on average 36.8 months after the onset of symptomatology, with extremes of 1 and 240 months. The most frequent localizations were the thigh (n = 8) and the leg (n = 2). The mean size of the tumor lesions was 11.3 cm, with extremes of 3 and 25 cm. The majority of our patients (10/16) had a tumor size greater than 10 cm (Figure 2). Macroscopic lymph node involvement was found in 5 cases in the groin (Figure 3) and in 1 case in the axilla. Magnetic Resonance Imaging (MRI) was the most widely used imaging test for primary tumor (n = 9), followed by Computed tomography (CT) and ultrasound (respectively 5 and 2 cases). Four patients underwent a standard radiography in addition to 3 examinations (Ultrasound, CT, MRI). Involvement of bones and vessels were found in 2 cases (12.5%). For 6 patients, the diagnosis was made after surgical excision performed in another hospital. Five patients had an incisional biopsy. Four patients (25%) had an ultrasound guided biopsy (Figure 4). The most common histological type was Dermatofibrosarcoma protuberans (7 cases) followed by spindle cell sarcoma (2 cases) (Table 1). Histological grading was found to be grade 2 in 8 cases (50%), grade 1 and 3 in 4 cases (25%). Half of the patients were classified T2bN0M0. Surgery was conservative in 14 cases, versus 2 cases of thigh amputation and upper limb disarticulation. Margins were clear (R0) in 7 cases, R1 in 6 cases, and R2 in 1 case. In cases involving prior inadequate management, the excision margins were R0 in 2 cases only. Lymph node dissection was performed in 6 patients, 5 of which were in the groin and 1 in the axilla. Reconstructive surgery was performed in 3 patients (Figures 5 and 6). There were two rotation flaps and one skin graft. Radiotherapy was performed in 2 patients (12,5%). One patient received neoadjuvant 46 Gy radiotherapy combined with weekly Cisplatyl, and another patient had adjuvant 50 Gy radiotherapy. Chemotherapy was neoadjuvant in one case (CDDP + Adriamycin) and adjuvant in 3 cases (Carboplatin + Adriamycin). In three cases of Dermatofibrosarcoma protuberans, patients benefited from daily Imatinib.

Table 1: Distribution according to histological subtype. 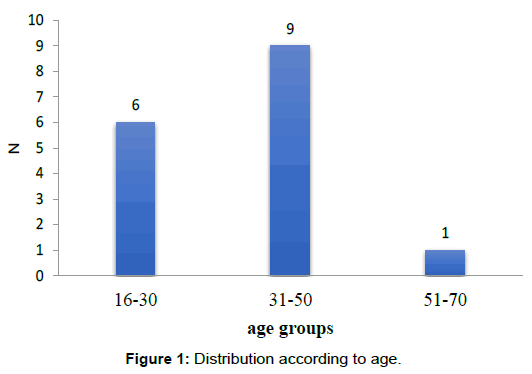 Figure 1: Distribution according to age. 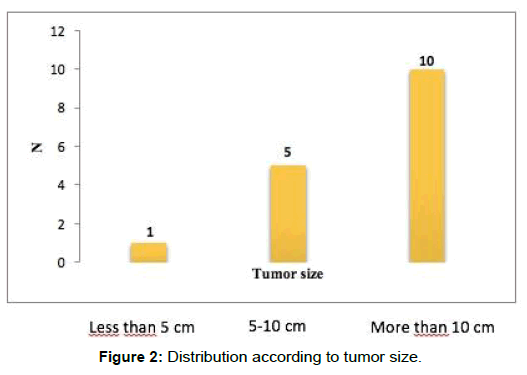 Figure 2: Distribution according to tumor size. The most prognostic factors observed in our patients were tumor size greater than 5 cm (15 cases), invasion of the surgical margins (7 cases) (Table 2) and a high histological grade (3 cases). After 10-month follow-up we found 4 recurrences, 4 distant metastasis and 5 deaths. All 4 metastases were localized in the lungs. The average time of death was 11 months, with extremes of 5 to 24 months.

Table 2: Distribution according to margin status.

Soft tissue sarcomas are rare. They represent 0.5 to 1% of malignant tumors in adults [6]. The incidence of STM of the limbs and the trunk is 3.6 in every 100,000 inhabitants per year [7]. The median age of onset is 45 to 65 years [8]. Patients are 10 to 20 years younger in Africa [6,10]. The sex predilection varies according to the series. Male patients predominate after age 60 [9]. Localization in the limbs and particularly in the thigh is more frequent [10,11]. The vast majority of STMs are sporadic. Several intrinsic factors such as NF1, RB1, p53, APC, neurofibromatosis type 1, congenital retinoblastoma, and Li- Fraumaeni, Gardner or Wegner syndromes have been identified. It is the same for extrinsic factors such as exposure to ionizing radiation, vinyl chloride, dioxin, chlorophenol and viruses [12,13]. In Africa, because of limited ressources in the field of cancer research, risk factors of soft tissue sarcoma are not really known.

The clinical presentation is that of a painless tissue mass. Inflammatory appearance is rare [2]. Reference to a specialized center is frequently a circumstance of discovery [10]. The delay of diagnosis is an important prognostic factor. It varies from one region to another, and from one center to another. All recommendations are in favor of an early reference to a specialized center. Initial management in a peripheral center is a factor of poor prognosis. In Dakar, a very long delay in diagnosis is noted, which compares to the findings of all African authors. The lesions encountered in the literature are variable in size, with a majority of tumors smaller than 10 cm. Larger sizes are described by several authors. Initially indolent, sarcoma and High-grade are big in size. The absence of high level education in low-income countries is a great cause of late diagnosis and big-sized tumors [14-16].

At the suspicion of diagnosis, which must be the case for any tumor of the limbs above 5 cm, MRI must be systematic. It provides the surgeon with important information such as the tumor size, the compartmental or extra-compartmental nature of the lesion, and the vascular, nervous, bone and joint involvement [17]. For tumors larger than 5 cm, the biopsy must be percutaneous and guided by imaging. Incisional biopsy is an alternative. Excisional biopsy is only acceptable for superficial lesions that are less than 3 cm in size [18]. Surgery should be considered early and should be as wide as possible. MRI units are not well distributed in level 2 and 3 hospitals in West Africa.

Despite the contribution of immunology and molecular biology, the heterogeneity of soft tissue sarcomas sometimes makes histological diagnosis difficult, and is responsible for a large number of entities and classifications of sarcomas [19-21].

The first site of metastatic involvement is the lung and more rarely the bones, the liver, the skin and the brain. Secondary lesions are frequently metachronous, even after aggressive treatments [22]. The treatment of sarcomas in a highly specialized and multidisciplinary team is a key element of the prognosis. Surgery is the cornerstone of the management of STM of the limbs. It is considered from the start if it can be R0 [23]. The combination of conservative surgery with adjuvant external radiotherapy allowed for equivalent results in terms of local control compared to radical amputation. Node dissection is not systematic. It is considered necessary in case of clinical node involvement [24]. Because of uncertain follow-ups and a high incidence of inguinal recurrence, we often practice inguinal lymph node dissection. Reconstruction is an integral part of limb soft tissue sarcomas surgery [11]. Flaps are used in less than 10% of patients in our practice because of the big size of the lesions [25].

The quality of surgical excision is the main factor of recurrence [26,27]. The rate of recurrence is 40 to 100% in cases of insufficient surgery [28], high histopronostic grade, lack of adjuvant radiotherapy, tumor greater than 5 cm, deep localization, previous recurrence and agressive histological subtypes [29]. Survival in Africa is similar in several teams, with an average delay of 6 months. The main prognostic factors are insufficiently studied by pathologist, and the availability of radiation therapy units are not effective in developping countries [9,10].

For limb soft tissue sarcomas, external-beam radiotherapy (XRT) is highly effective in preventing local recurrence (LR), but patients who have a low risk of LR may not require adjuvant XRT after limbsparing surgery [22].

There is a consensus to irradiate any deep sarcoma of Grade 2 or 3, regardless of its size. For lesions that are less than 5 cm grade 1 superficial, with margins greater than 1 cm, the need of radiotherapy is not formal [15]. Neo adjuvant radiotherapy remains controversial [23]. Neo-adjuvant chemotherapy is increasingly used for STMs [3]. The role of chemotherapy in adjuvant therapy remains controversial but commonly used according to prognostic factors [4]. Imatinib is used in dermatofibrosarcoma protuberans in the neo adjuvant setting. It seems to contribute to the decrease of local recurrence [30].

Soft tissue sarcoma of the limbs are the most frequent malignant tumors with mesenchymal differentiation. They are often large in size. The main treatment is R0 resection. The prognosis depends on the stage of the disease, the quality of the surgery, the histo-prognostic and the molecular grade. In Africa the advanced stages are the most frequent at diagnosis. There is a great lack of pathologists, immuno histochemistry analysis as well as high level diagnosis methods such as MRI. Therefore recurrence rate is high and survival is very low.