Colon cancer is the most common cancer worldwide. Recently, natural products have been used for the treatment of cancer are becoming an important research area for drug discovery. Terrein, a fungal metabolite derived from Aspergillus terreus, has shown to have a variety of biological activities that exhibit selective anticancer activity including colon cancer. However, cytotoxic effects of terrrein against human colon cancer cell lines have never been studied before. Therefore, the present study observed the cytotoxic effects of terrein by using the MTT assay. The sensitivity was evaluated by comparing the effect to COLO 205 cells with vero cells for 24 h. The results of MTT assay showed that terrein was cytotoxic to COLO 205 with IC50 at 0.05 mM, but not to normal Vero epithelial cell line. The induction of dead cells was further investigated by observing the cellular morphology of nuclei using Hoechst 33342 staining, a DNA specific dye. The results showed increasing treated cancer cells in nuclear condensation and fragmentation with 0.05, 0.15, 0.2, 0.25, 0.3 mM at 6 h by observing under the phase contrast inverted microscopy. These data supported that the mode of dead cell induction of terrein, possibly activated via apotosis mechanism. Terrein is an interesting compound that might be a potential candidate for colon cancer treatment. However, investigation through the mechanism of action is needed.

Terrein is a fungal metabolite, (Figure 1) first described by Raistrick and Smith as a powerful reducing compound [1]. However, it did not receive a lot of attention until the last decade. In the last decade a variety of biological activities were discovered. They discovered that Terrein has the capability of melanogenesis inhibition, antiantiproliferation, anti-inflammation, angiogenesis inhibition, and proteasome inhibition [2-5]. However, the eligibility of anticancer has not been elucidated yet. In this study, the focus is to investigate terrein as the anticancer agent and to carry out preliminary study through the activation of apoptosis signaling as apoptosis or programmed dead cell, accepted as a key mechanism for most anticancer agents. COLO 205 was selected as a model of study, as it was reported that the incidence of colon cancer is one of the highest causes of mortality in patients worldwide, with 1.65 million new cases and almost 835,000 deaths in 2015 [6]. In Thailand, it is the third most common cancer in males and the fifth most common in females [7]. Colon cancer treatment may include surgery, chemotherapy, and radiation. All treatments cause side effects which depend on the type of treatment, age, and the patient’s health. From these diverse effects of terrein, it is interesting to study further on its capability as an anti-cancer property, especially to the process of cell cytotoxicity which is the crucial characteristic of malignant type. 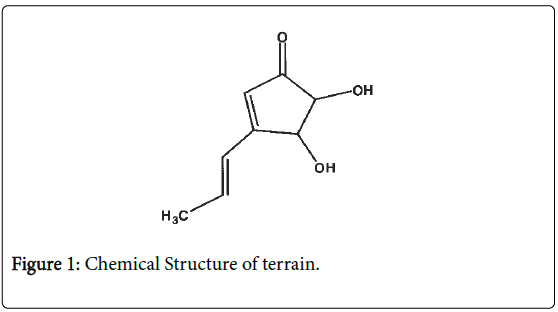 Our preliminary data supports that terrein is an interesting compound to be industrialized as an anti-cancer agent and to be studied further in the process of cell viability and proliferation by MTT and Trypan blue assay; moreover, morphological changes were studied by Hoechst 33342.

Determination of IC50 by MTT assay

The effect of terrein on proliferation or inhibition of COLO 205 was tested by MTT assay. Briefly, COLO 205 cells were suspended in complete RPMI 1640 at a concentration of 2 × 104 cells and seeded into 96 well plates at 100 μl per well. Then, these cells were treated with terrein (dissolved in DMSO) at 0.05, 0.15, 0.2, 0.25, 0.3 mM in triplicates. An untreated group was added with 0.5% DMSO and used as a negative control. The cells were incubated for 24 h at 370°C in 5% CO2. After treatment, the cells were incubated with MTT dye (Thiazolyl Blue Tetrazolium Bromide: (3-(4,5-Dimethylthiazol-2- yl)-2,5 diphenyl tetrazolium bromide) at 0.5 mg/ml and incubated for 2 h. The formed formazan crystals product was dissolved by adding 100 μl of DMSO. After 15 min of incubation at room temperature, the amount of purple formazan product was determined by using the ELISA micro plate reader with the optical density (OD) measured at 595 nm. The percentage of cell viability was calculated as

Cell viability of the terrein on COLO 205 and Vero cells were tested by Trypan blue exclusion method. COLO 205 cells were suspended in complete RPMI 1640 at a concentration of 2 × 106 cells and seeded into 6 well plates at 1 ml per well. Then, these cells were treated with terrein (dissolved in DMSO) at 0.05, 0.15, 0.2, 0.25, 0.3 mM for 3, 6, 9, 12 and 24 h. Cells were incubated with 0.4% trypan blue solution followed by a fixation step. For this staining, confluent cells were washed with PBS for three times and then incubated with trypan blue concentration 0.4% (v/v) (in dH2O) for 10 min at room temperature (RT). Cells were washed with 1X PBS again and observed with 20x objective of Nikon inverted microscope. Live (unstained with trypan blue) and dead (stained with trypan blue) cells were counted for each treatment. Experiments were performed as three independent replicates.

The effect of terrein on the nuclear morphology was determined by Hoechst 33342 staining assay. Cells were grown in 6-well tissue culture plates at the density of 1 × 106 cells per 200 μl per well and treated with terrein at 0.05, 0.15, 0.2, 0.25, 0.3 mM for 6 h. After treatment, cells were harvested and centrifuged at 400 g for 5 min at 25°C. The pellets were washed twice with phosphate-buffered saline (PBS). Control cells were exposed to the vehicle control 0.5% DMSO. Then, the cells were subsequently exposed to 10 μl of Hoechst 33342 solution (10 mg/ml in water) and stained for 15 min at 37°C in the dark. The chromatin condensation and fragment nuclei was monitored and imaged under a Confocal Laser Scanning Microscope at 40x magnification (Olympus Fluo View FV 10i, Japan).

The results were expressed with mean ± standard deviation (SD, for each group n=3). All data were processed with GraphPad Prism 5 software. Data analysis was performed by using Nonlinear Regression to evaluate the Inhibition Concentration at 50% (IC50) for MTT assay. SPSS software was used for the statics of live and dead cells which were compared by ANOVA test. Linear graphs show linear error for ± standard of the mean.

The chemical structure of terrein is shown in Figure 1 [2]. The MTT assay was done to evaluate the antiproliferative effect of terrein on COLO 205 cell line in a time and dose-dependent manner of a 24 h treatment. The results showed that terrein exhibited significant antiproliferative effect against COLO 205 cells. IC50 appeared to be 0.05 mM (Figure 2). The Trypan blue exclusion method was used to determine whether terrein has cell viability effect on COLO 205 and normal cells(Vero). The cytotoxicity was more restricted to cancer cells because a higher concentration of terrein did not affect the Vero cells (Figures 3A and 3B). This demonstrated the potential use of this compound as the anticancer agent. To further characterize the mode of dead cells induction used by terrein, nuclear morphology was observed by staining with Hoechst 33342, a specific DNA binding dye. As depicted in Figure 4, the fragmented and condensed nuclei were observed and their numbers increased with time. This supports the possibility of apoptotic signaling induction as characteristic of cell shrinkage, nuclear condensation, blubbing formation and DNA fragmentation as well known distinctive morphology of apoptotic cells. Therefore, terrein is an interesting compound to be used as an anticancer agent. Further studies are needed in order to better understand the mechanism of terrein. 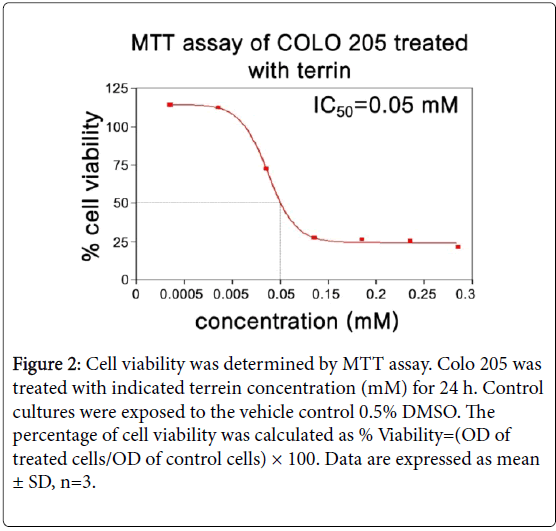 Figure 2: Cell viability was determined by MTT assay. Colo 205 was treated with indicated terrein concentration (mM) for 24 h. Control cultures were exposed to the vehicle control 0.5% DMSO. The percentage of cell viability was calculated as % Viability=(OD of treated cells/OD of control cells) Ã 100. Data are expressed as mean Â± SD, n=3. Our study demonstrated that terrein was a potent candidate as an anticancer agent for COLO 205 due to the cytotoxicity. The cytotoxicity effect of terrein to COLO 205 was shown at 0.05 mM for 6 h. Compared to the literature reviewed, there was no report about the cytotoxicity in cancer cells. However, it was shown that terrein has a property of anti-proliferation in normal skin equivalents [8]. The cytotoxicity effect was shown to exhibit terrein at a concentration of 0.05 mM. The difference of cytotoxicity value might be due to the sensitivity of each cell type. Our work proved that terrein was more toxic to cancer cells compared to normal cells. Terrein depicted various cellular and morphological changes during early and late apoptotic phases including, cell shrinkage, blabbing, dense cytoplasm, compact cell organelles and condensed nuclei. From the nuclear and cytoplasmic assays, it was evident that terrein induces apoptosis, which is the main type of programmed dead cell. However, the mechanism of terrein to inhibit cell proliferation might be due to the inhibition of mitogenic signaling. As previously reported, terrein inhibited human skin keratinocyte cells by induction cell cycle arrest at G2/M phase and inactivation of ERK signaling pathway [9]. Notably, the inhibition of ERK or AKT signaling is often observed in terrein-treated cells even with absence of apoptosis [10]. Differential outcome of terrein treatment on various cell lines indicate that we may use terrein in combination with other chemotherapeutic drugs. This study is the preliminary study of antiproliferative effect, induced apoptosis, and we also observed the effect of terrein on the COLO 205 that has not been reported before. Therefore, terrein might be a good candidate to be developed as the anticancer agent. The mechanism of cancer cell inhibition should be studied further in order to deeply understand the mechanism of terrein.

This work was funded by a research grant from Rangsit University. 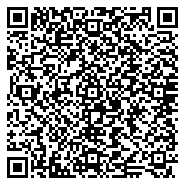