Objective: The aim of the study is to form an impression about the spectrum of non-diabetic kidney disease and evaluate the factors which can differentiate the two.

Methods: A descriptive study, conducted in Nephrology unit, The kidney center Karachi, from January 1998 till December 2015. The study included 212 diabetic patients. Those who do not have complete record and eye examination were excluded.

Conclusion: Focal segmental glomerulosclerosis and Tubulointerstitial nephritis were the most common biopsy findings in this cohort, while shorter duration of diabetes mellitus and absence of diabetic retinopathy were important factors to diagnose non diabetic kidney disease.

The incidence of diabetes is rising all over the world, the prevalence which was 6.4% in 2010 is expected to increase to 7.7% in 2030. It means the number of people living with diabetes will increase from 285 million in 2010 to 439 million in 2030 [1]. Between 2010 and 2030, there will be 69% increase in the number of adults with diabetes in developing countries and 20% increase in developed countries. This stunning rise in the incidence is somehow more phenomenal in developing countries of Asia like India, China, Sri Lanka, Malaysia, Japan and Pakistan [2]. The same trend is also observed in Asian population living in western countries [3].

Data from Pakistan both from National Health Survey and National Diabetic Survey although limited but interesting as it showed the prevalence of diabetes in men and women of urban areas is 6.0% and 3.5% respectively. While in rural men and women it is 6.9% and 2.5% respectively [4]. It is highest in the province of Punjab [5]. There is an ethnic differences and it is more prevalent in Mohajirs (men 5% and women 7.5%) than Punjabis (men 4.6% and 3.8% women) [6].

In the course of their diabetic disease, a diabetic patient could develop other glomerular or interstitial disease which we call nondiabetic kidney disease. The prevalence of non-diabetic kidney disease (NDKD) in type 2 diabetes mellitus (DM) is high and it varies from 10% to 85% [7-9]. Due to this increasing tendency of DM, nephrologist come across more and more patients in their clinic who have DM with superimposed other renal diseases. The ability to clearly differentiate between renal lesion associated with diabetic nephropathy (DNP) and NDKD in diabetic patients is critical for making appropriate treatment decision. Kidney biopsy can discriminate diabetic kidney disease (DKD) from NDKD.

Therefore the judgment to strive for renal biopsy becomes crucial while making a clinical decision when evaluating the diabetic patients with renal disease. The renal physician should contemplate whether NDKD is potentially present and the pros and cons of renal biopsy [10]. Routine use of renal biopsy should be put into practice especially in those with aberrant features, like sudden onset of proteinuria, hematuria, short duration of diabetes mellitus, and absence of diabetic retinopathy (DRP) [11-14].

The aim of our study was to evaluate the diversity of NDKD which are present in the diabetic patients and to assess the predictability of diagnosing NDKD v/s DKD on the basis of clinical and laboratory findings.

This retrospective analysis included all patients who have been known to have DM and experienced Kidney biopsy at The Kidney center post graduate medical institute during 1998 to 2015. The data was collected from the patient’s records. We included all diabetic patients who had complete records of eye examination and kidney biopsy. Those patients were excluded who did not undergo retinal examination and kidney biopsy and did not have complete data and follow up. DNP was diagnosed by the presence of classical diabetic Kimmelstiel-Wilson nodular lesion or by the presence of mesangial expansion, diffuses intercapillary glomerulosclerosis, fibrin caps, capsular drops and basement membrane thickening. Non diabetic kidney diseases were classified according to their established histopathological criteria. Duration of DNP was defined as the period between the onset of DM and kidney biopsy. On the basis of histological findings, we divided the patients into three groups, those with pure DKD, those who have DKD with superimposed NDKD (DKD +NDKD) and those with pure NDKD.

The clinical variables which were recorded at the time of kidney biopsy were, age, gender, duration of DM, blood pressure, serum creatinine, serum albumin, hematuria and urinary protein creatinine ratio.

Data was entered in MS Excel and analyzed by using S.P.S.S. V.21.000 (Chicago). Mean ± standard deviation was computed for quantitative variables and categorical variables were described in terms of frequencies and percentages. The normality of the variables was checked by Shapiro Wilk Test. Mean with standard deviation was taken for normally distributed variable while for skewed parameters median was used. To see the difference in variables between the three groups (DKD, NDKD + DKD and NDKD), the ANOVA test was applied for parametric data and KrusKal Wallies test for nonparametric data. To find the association of categorical variables with NDKD, DKD and NDKD + DKD the Chi Square test was performed. The level of significance was set as ≤ 0.05 (p value). 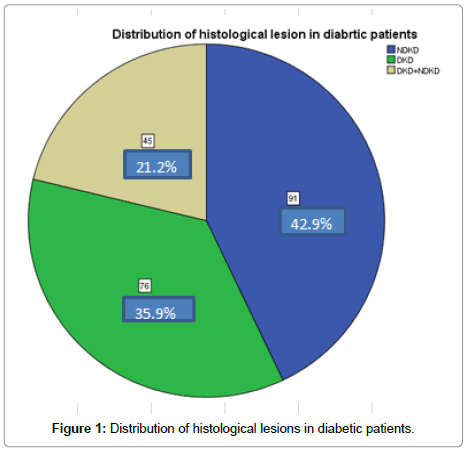 The age and clinical parameters of the Patients were evaluated with reference to the three histological groups (NDKD, DKD and NDKD + DKD). The difference was assessed for their significance to predict NDKD vs. DKD and NDKD+DKD and found that duration of diabetes mellitus and presence of diabetic retinopathy were different between three groups while all other variables were insignificant (Table 1).

Table 3 describes the biopsy lesions of kidney in reference of NDKD alone and NDKD + DKD and found that the most prevalent lesion in those who had only NDKD was also FSGS followed by ChTIN, ChGN, CGN, MGN, Amyloidosis ATIN, ESKD, ATN and MPGN, while PIGN, MCD, HTN nephrosclerosis, FPGN, DPGN were less common. In those patients who had NDKD superimposed on DKD (NDKD + DKD) the most frequent lesion was CTIN followed by MGN, chronic GN, CGN and ESKD etc.

Table 3: Summary of non-diabetic kidney lesions found in biopsies of both groups.

Among those 136 patients who had non diabetic kidney lesions (91 with only NDKD and 45 with associated DKD) 63 divulged the diagnosis that in general, could change the treatment plane. In this subgroup of the patients we excluded, FSGS, ChTIN, ChGN, ESKD and HTN nephrosclerosis and included those with the diagnosis of MGN, CGN, MPGN, ATN, ATIN, Amyloidosis, DPGN, MCD, PIGN, MM and FPGN. The majority of the cases 40(63%) were found in patients with NDKD alone (Table 3).

Renal biopsy is an important tool to diagnose renal disease especially glomerular diseases. Native kidney biopsy of non-diabetic patients showed various types of histological patterns which differs significantly from region to region, and among different ethnic population in the same region and it is changing over the periods in the same population [15]. Due to increasing prevalence of DM, DKD has now become one of the major glomerular diseases. Therefore it has become very important to differentiate DKD from NDKD, particularly when patient presents with atypical features. It is also important to know the pattern of NDKD in diabetic patients, is it different from lesions in non-diabetic patients?

The mean and median age of our biopsy patient was 52 years which is low compared with other cohort [7,8], there was no significant difference in age among the three group. Sharma et al found patients with DKD alone were slightly younger than patients with NDKD. The prevalence and type of NDKD, reported in this population is different. This variation could be due to difference in study design, biases in reporting and selecting patients, ethnicity and geographical differences, differences in threshold of doing biopsy in diabetic patients in different center. It has been observed that doing biopsy even in same ethnicity and geographical center with restricted policies to perform biopsy, had lower rates of DKD and the majority of NDKD was not associated with DKD. On the other hand, centers with open and unrestricted biopsy policies reported half of the patients having DKD alone with remainder having features of mixed DKD and NDKD [16].

The high prevalence of FSGS was reported in kidney biopsy of non-diabetes patients in this region, India, Pakistan, China [17-19] and we found the FSGS in most of our diabetic patients as well. Among diabetes patients, our data is different from the studies conducted in this region, for example in, India and Pakistan acute interstitial nephritis shows high incidence in two studies [20,21], while IgA Nephropathy is the most common lesion in kidney biopsy in Chinese patients [22,23]. The data from the only study conducted in Pakistan is of special concern as it showed AIN secondary to NSAIDS is the most prevalent biopsy feature while they found FSGS is 5.8% of the population. This might be due to the difference in the type of patients encountered in these hospitals as one is a general hospital and other is specifically deals with kidney patients. Membranous Nephropathy was reported to have high incidence as NDKD by two of the Indian studies [20,24] and one of the Japanese study [25].

Another important aspect of renal disorder in diabetic patients is the value of clinical and laboratory marker which could differentiate the diabetic and non-diabetic lesion. Various factors have been reported which suggest high probability of non-diabetic kidney diseases. These parameters reportedly are duration of diabetes mellitus, hematuria, and early onset of proteinuria. This study showed absence of diabetic retinopathy and small duration of DM has strong predictive value for the presence of non-diabetic kidney disease.

Conceivably, the most significant feature of this study is not only that NDKD was identified in greater number of patients who underwent kidney biopsy, but also the spectrum of NDKD observed on biopsies, either alone or superimposed on DKD. The overwhelming majority of these diagnoses would provide important changes in the treatment for example use of immunosuppression, benefits of renninangiotensin aldosterone axis inhibition.

It is now well pretty obvious that the some specific lesions are common in some specific population for example IgA nephropathy is more common in Europe, China Japan, Korea, while FSGS is more common in America and in Asian countries like India Pakistan and Bangladesh. The reasons of this pattern are obscure. Since the diabetics have altered immune response there is possibility that they might have different histological patterns then non diabetic patients in the same population. Therefore it is important to have more renal histological data of diabetic patients by opting light criteria of performing renal biopsies [26].

Focal segmental glomerulosclerosis and Tubulointerstitial nephritis were the most common biopsy findings in this cohort, while shorter duration of diabetes mellitus and absence of diabetic retinopathy were important factors to diagnose non diabetic kidney disease. 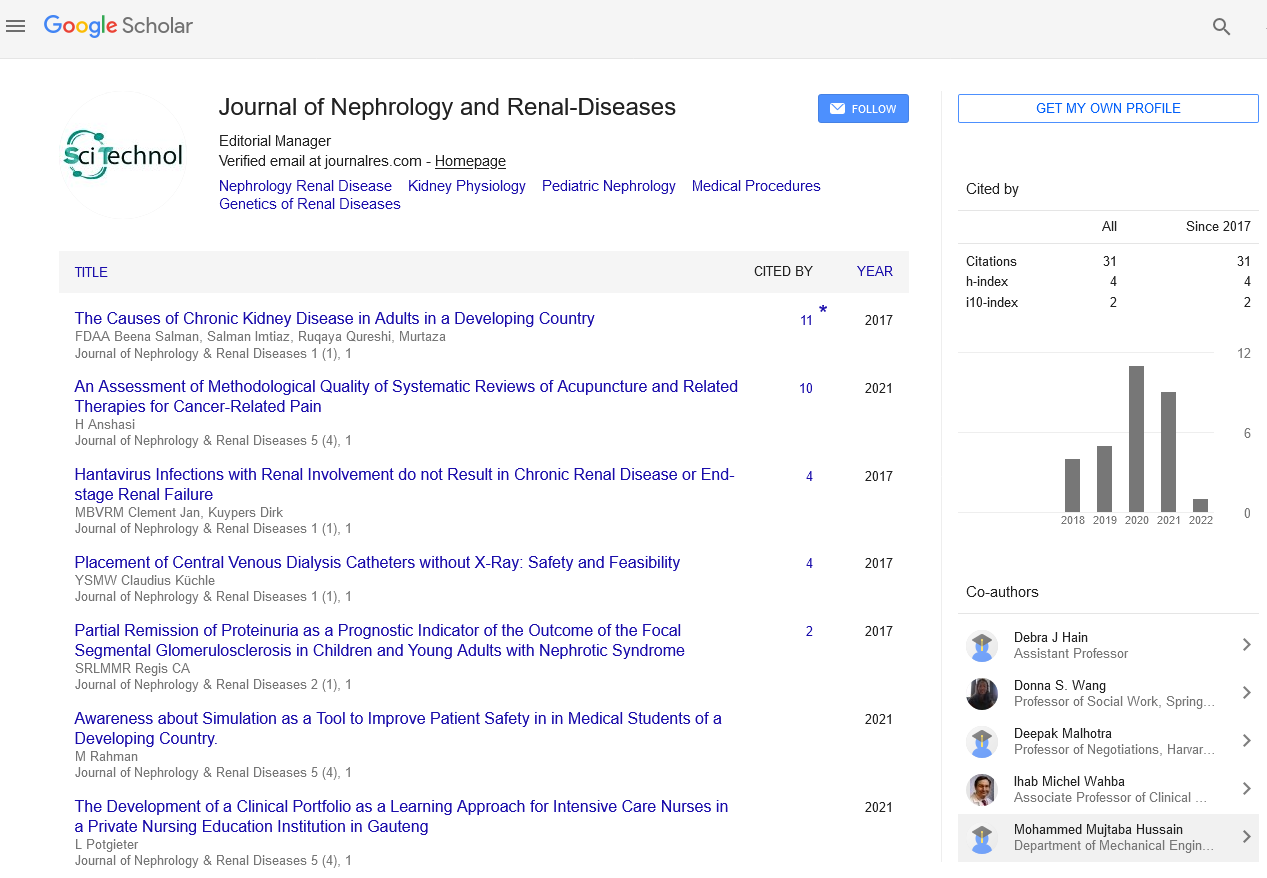