The Efficacy of Homoeopathic Medicines in Management of Menopause

3Central Council for Research in Homoeopathy, Ministry of AYUSH, India

Background: Adult women all over the world are familiar with the term "the transition," which refers to the changes that accompany menopause. Many women are afraid of these changes because they imply a decrease in fertility and sexuality, as well as the start of ageing. Menopause should be referred to as "a transition in women's lives," rather than "The Change" This study consists of two parts, theoretical part and practical part. Theoretical part is completed by studying; collecting and compiling the data by going through extensive literature and information’s available regarding Management of Menopause. In practical part study was carried out on 30 cases of menopausal complaints and treated according to the methodological criteria. Method: In this pilot study the participants above 45 years of age presenting with cessation of menses for at least 12 months along with menopausal complaints 30 participants have been chosen after fulfilling the criteria of case definition, inclusion and exclusion parameter. Followed by a detailed case taking and clinical examination was done to every participants. Results: From the response of patient, it is found that 18 patients showed good improvement, 9 patients showed moderate improvement and 3 patients showed poor improvement. Conclusion: This study showed a significant relief to the patients suffering from symptoms of Menopause. Apart from prescribing homoeopathic medicine judiciously, there is also a need of psychological counseling along with educate women about their changes in their bodies will be going through, which will reduce their anxieties considerably.

Adult women all over the world are familiar with the term "the transition," which refers to the changes that accompany menopause. Many women are afraid of these changes because they imply a decrease in fertility and sexuality, as well as the start of ageing. [1] Menopause should be referred to as "a transition in women's lives," rather than "The Change" [2].

There is a common confusion that it is a disease. It must only be regarded as the end of menstruation and a normal stage in the life of a woman. Fears of growing old, not being able to create life, the loss of cycles and hormones, and the ‘Empty Nest Syndrome' may all arise during this time. Around 25% of females experience several troublesome symptoms during menopause, 50% of females experience mild symptoms during menopause, and 25% of females have no symptoms other than the cessation of menstruation. All of these concerns must be discussed, and every woman must understand that the focus should not be on the losses, but on the gains of adult maturity, experience, and freedom [3].

After menopause, gonadotropin production increases, but estrogen and progesterone production decreases due to non-response by the ovaries. The lack of inhibitory effects of estrogen in the hypothalamus is caused by increased gonadotropin output [4].

The onset of menopausal syndrome is normally gradual. Hot and cold flushes, episodic fatigue, emotional disturbances (especially a feeling of depression), excessive or scanty menstrual bleeding, short or prolonged bleeding, and a period interval ranging from a week to several months may all be early indicators. Symptoms may appear several years before changes in bleeding occur, and they may reappear with declining frequency and severity years after all bleeding has stopped.

Menopause is often feared by married women as the termination of sexual desire and physical love. In fact, if women do not do anything else, their libido remains the same, and marital relationships continue even after menopause. This research is being done to see how successful homoeopathic medicine treatment is for changes that occur before, during, and after menopause [5].

This was a prospective study on clinical homoeopathy. This study was approved by an Institutional Ethical Committee, Bharati Vidyapeeth (Deemed to be University)-Homoeopathic Medical College & Post Graduate Research Centre, Pune. Informed consent was obtained from all participants. The study has been conducted and patients were followed up to a period of 9 months at Out-patient department of Bharati Vidyapeeth Medical Foundation-Homoeopathic Hospital, Peripheral clinics and various urban camps series.

The participants above 45 years of age presenting with cessation of menstruation for at least 12 months along with menopausal complaints, i.e.; hot flushes, night sweat, irritability tearfulness were recruited in this study.

30 participants have been chosen after fulfilling the criteria of case definition, inclusion and exclusion parameter. Followed by a detailed case taking and clinical examination was done to every participants.

All patients seen during the recruitment phase were screened for eligibility according to the above criteria. The potentially eligible women underwent a classical medical interview, focusing on hot flashes as their major complaint and, upon. Nosological diagnosis was done after clinical study and investigations. Standardized case records were prepared and maintained of all patients followed by standardized follow-up sheet were prepared and kept regularly, follow-up was done at minimum 2 days or monthly follow-up according to the requirement of the case.

Good When the patient has symptomatic relief with more than 75% reduction.

Moderate When the patient has symptomatic relief with more than 50% up to 75% reduction.

Poor When the patient has symptomatic relief with less than 50% reduction.

The remedy was selected after detailed case taking, and making the totality of the symptoms on the basis of analysis and evaluation and repertorisation was done.

Dose and strength of drug

Medicines were administered in various potencies on the basis of law of Homoeopathic Posology according to the need of the case.

Medicine was given in oral route.

Drugs were procured from standard GMP certified Homoeopathic Medicines Manufacturer and were stored as per the rules of Homoeopathic Pharmacopoeia of India (H.P.I.).

Author retrieves data from all the 30 cases which were studied in the period of one and half year, where the intensity of menopausal symptoms it is found to be more in the age between 45 to 50 years (63%) than above 50 years of age (37%), (Figure 1).

Where it showed that 1M potency was more frequently used in this study. Complaints related to Menopause mentioned in Figure 4 where it reveals that 6 cases had associated with hypertension (HTN) amidst of total 30 cases. It was seen that most of the menopausal women had manifested with hypertension. But any direct correlation between menopause and hypertension has not been confirmed. In this study dietary nutritional advice and Counseling was given in cases wherever necessary to the patient to avoid further derangement of their health. 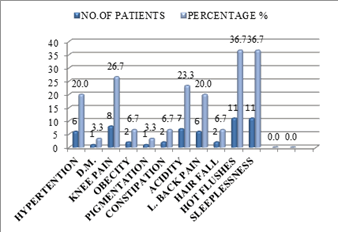 In the Pilot study, main aim was to study the efficacy of Homoeopathic medicines in Management of Menopause. So, in all participants recruited in the study tried to find out the mental & physical state of person suffering from it and prescribed accordingly on the basis of totality of symptoms. In this study it reveals that menopause is not any disease or ailment, more precisely it is a crucial phase of life that comes in every female, more or less evidently depending from person to person which has negative impact on their social, physical and also psychological well-being, causes humiliating suffering.

There is no specific remedy for Menopause but drugs selected on symptom totality of that individual only are found useful. Many cases gave good response to 1M potency & few of them required 200 too.

Cases from moderate category may require treatment for some more time either by restudy of the case to confirm the constitutional medicine or a change in potency or the introduction of an anti-miasmatic remedy. Cases from Poor outcome category showed some improvement but it was not enough to draw any conclusion. These cases may require careful analysis, confirming and changing, of remedies. Also some cases have strong maintaining causes relating to modern lifestyle which has to be addressed by the individual. Careful re-assessment is necessary in these cases. The points may think about in moderate & poor category are whether more repetition, change in potency, use of deep acting Constitutional remedy, use of anti-miasmatic or complementary remedy may be required for further evolution. Here, in this study improvement at the level of mental and physical general was seen in cases from both the categories i.e.; Good and Moderate.

After proper nutritional advice, counseling and educating the women, it enhance to reduce their anxieties considerably due to which the patients were more aware of their complaints and why they were going through these changes hence they could take care of themselves more efficiently, like improving physical health, frequent exercise and balanced diet which can contribute to a feeling of wellbeing.

Constitutional Homoeopathic treatment is best during the transitional period of menopause in order to balance hormonal levels and relieve the many accompanying symptoms. We cannot address the complex of symptoms as separate from the whole individual, for this reason true classical Homoeopathic prescribing is highly recommended for the treatment of menopause. This period if managed successfully, marks a new beginning of fresh phase of life in that women. To make her second innings of life fruitful and healthy we need to address the specific and common issues and manage them appropriately. This study showed a significant relief to the patients suffering from symptoms of Menopause. Apart from prescribing homoeopathic medicine judiciously, there is also a need of psychological counseling along with educate women about their changes in their bodies will be going through, which will reduce their anxieties considerably. Proper nutritional advice was given to the participants to avoid further derangement in their health. In this study it was found that intensity of hot flushes or other associated symptoms are much reduced with the subsequent follow-ups.

Authors declare no conflict of interest.

Informed consent has been obtained from all the patients during the time of baseline regd. in hospital.