The Role of Transoral Oropharyngectomy in the Management of Oropharyngeal Cancers

The incidence of oropharyngeal carcinoma is increasing as a result of increasing Human Papilloma Virus (HPV subtypes 16 and 18) infection of the oropharynx. 31 patients with oropharyngeal squamous cell carcinoma were treated in a university teaching hospital. The primary cancer was resected by either transoral laser microsurgery or transoral robotic surgery. Patients underwent simultaneous neck dissection when indicated. The Multidisciplinary Team (MDT) decided whether patients required postoperative radiotherapy/ chemoradiotherapy depending on tumour and patient factors. Survival was analyzed using a Kaplan-Meier estimator. The results were discussed alongside a literature search on oropharyngeal carcinoma management. 87.4% patients were disease free at 1 year, and 77.2 % at both 3 and 5 years. Overall survival at 1 year was 92% and 76.4% at both 3 and 5 years.

There is an increasing incidence of oropharyngeal carcinoma (OPC) globally, which is due to increase in HPV infection [1,2]. OPC includes malignant neoplasms occurring in the base of tongue, lingual tonsil, soft palate, uvula, palatine tonsils and posterior pharyngeal wall [3,4]. OPCs are most commonly squamous cell carcinomas and can be broadly divided into HPV positive and negative tumours.

Risk factors for OPC include smoking and high alcohol consumption. Human papilloma virus HPV16 causes HPV-positive (p16-positive) oral and oropharyngeal cancers [5]. p16, itself, is a tumour suppressor protein, which is upregulated in HPV positive oropharyngeal carcinoma. HPV positivity of an oropharyngeal tumour is conferred by testing for upregulated levels of p16. Sexual behaviour is the risk factor in HPV positive cases but not smoking or alcohol consumption [6,7]. The population attributable fraction (PAF) of HPV in OPC is about 26% worldwide but appears to be higher, about 50% in North America, Japan and Australia [8,9]. Men have a greater proportion of HPV-positive OPCs compared to women [9].

Over the last 20 years, there has been a shift in the treatments offered for OPC [10]. Surgical treatment used to involve open resection requiring lip split and mandibulotomy and was associated with significant morbidity, from the year 2000, there was a shift towards chemoradiotherapy instead of surgery [10]. Chemoradiotherapy, however, had its own side effects. Over the past 10 years transoral surgery with the laser or robot has gained popularity as good clearance rates are now achievable whilst avoiding the morbidity of open surgery or primary chemoradiotherapy [10]. Increased survival rate from OPC is due to the increase in the proportion of p16-positive OPC as it carries a better prognosis [2,11].

The aim of this study was to analyze the oncologic and survival outcomes of patients who had undergone transoral surgery for OPC.

Ethical approval was not required as transoral laser microsurgery (TLM), and transoral robotic surgery (TORS) are established treatments for oropharyngeal cancer at our institution.

All patients were staged via panendoscopy (thorough examination under general anaesthesia of upper aero digestive tract) and CT imaging. Management was discussed in in the MDT setting prior to surgical treatment. Where TLM or TORS was recommended, this was always with curative intent. Palliative patients were excluded from the study.

As for the operative procedure, TLM was performed using the Acublade CO2 laser using the Steiner technique [12] with a transtumoural approach to cancer resection. For TORS, the Da Vinci robot was used with resection of the cancer en bloc using monopolar diathermy. HPV status was determined from histopathological specimens by p16 immunohistochemistry [13].

Table 2: T and N classification and HPV16 status of patients.

5 patients required gastrostomy feeding at some point postsurgery and 3 patients had temporary tracheostomies inserted at the time of primary surgery.

19% (n=6) of these resections had positive margins after initial surgery. All these patients went on to have further resection which yielded negative margins. 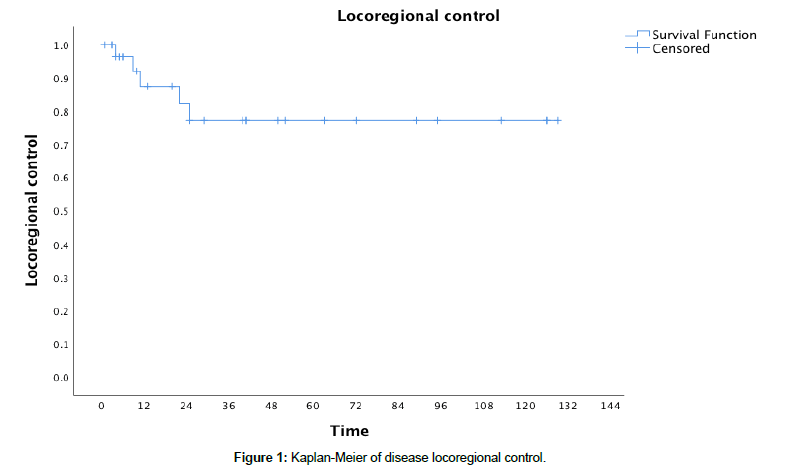 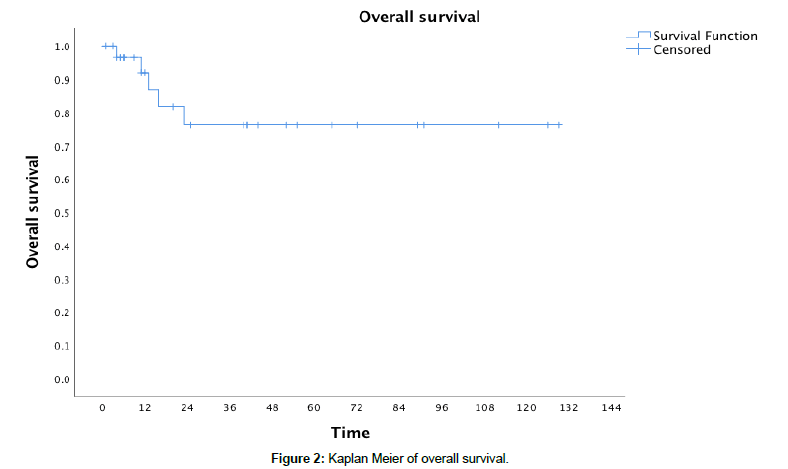 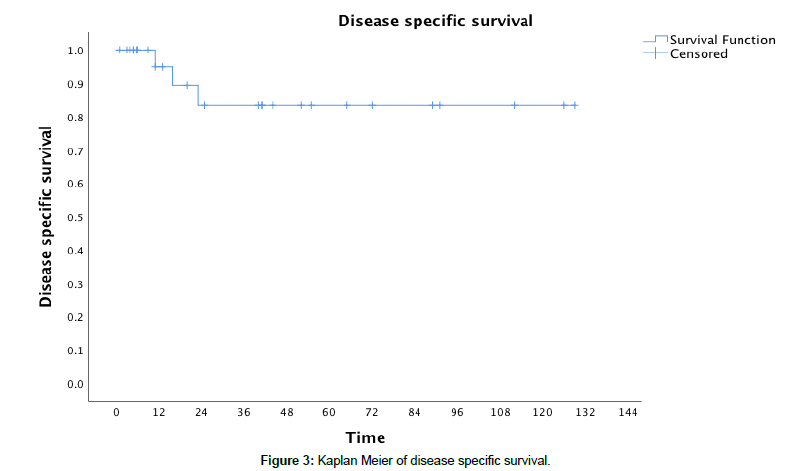 Mean patient follow up was 5 years, during which 7 (23%) patients died. 4 of these patients had locoregional recurrences and subsequently died from their disease. 1 patient had a synchronous lung primary and died from this. 1 patient died from a myocardial infarction and 1 patient from post-operative secondary bleeding who was found to have significant cardiac disease.

There is evidence to suggest that transoral surgery offers benefit over chemoradiotherapy in terms of post treatment morbidity. There is preliminary evidence showing that transoral surgery is associated with good early swallowing outcomes at 3 months compared to patients treated with chemoradiotherapy [16]. There is a clinical and cost benefit in TORS for partial pharyngectomy and posterior partial glossectomy [17]. Unfortunately, in our study 20 out of 25 (80%) patients treated with transoral laser surgery (TLM) and 2 out of 6 (33.3%) patients who underwent transoral robotic surgery (TORS) still needed postoperative adjunctive non-surgical treatment in the form of radiotherapy or chemotherapy. However, with further experience of these techniques in our centre, it is hoped that this number can be significantly reduced. We also recognize the incomplete smoking and alcohol histories gathered in the medical notes.

The De-ESCALaTE (Determination of Cetuximab Versus Cisplatin Early and Late Toxicity Events in HPV+ OPSCC) randomised control trial examined less toxic therapy for low risk oropharyngeal carcinoma patients. It compared early and late toxic events in low-risk HPV positive oropharyngeal cancer patients treated with cetuximab versus cisplatin. Though the result of this study may take some time yet, it may lead to a change in treatment protocols, with decreased morbidity [20].

In a selected group of patients with OPC, transoral laser or robotic surgery is a valid treatment with low morbidity and comparable outcomes compared to chemoradiotherapy.

This retrospective study, although relatively small, suggests that in selected OPC P16-positive patients, transoral laser or robotic surgery can often eliminate the need for adjuvant therapy and its associated toxicity. Current ongoing research on adjuvant therapy may also lead to similar outcomes.

This article does not contain any studies with human participants performed by any of the authors.

Ethical approval was not required as transoral laser microsurgery (TOLMS), transoral endoscopic surgery (TOLES) and transoral robotic surgery (TORS) are established treatments for oropharyngeal cancer at our institution. Written informed consent for each procedure was obtained from patients.