Background: Adenoidectomy is one of the most common ENT procedures. We conducted this study in children to evaluate and compare the efficacy and safety of two methods of adenoidectomy, trans-oral endoscopic adenoidectomy (TEA) using bipolar radiofrequency suction diathermy versus transoral mirror adenoidectomy (TMA) using monopolar suction diathermy. Study design: Prospective randomized controlled study. Method: 80 patient with adenoid hypertrophy planned to do adenoidectomy with age range from 1 year to 12 years were recruited in this study, divided in 2 equal groups. 40 patients in Group A (TEA) and 40 patients in group B (TMA). The main parameters monitored are operation time, intraoperative blood loss, postoperative pain, complications and recurrence of adenoid. Result: operation time was found longer in group A (17.8 min) than in group B (13.95 min) with a P=0.015. The pain score is less in group A (1.73) than in group B (2.03) with P=0.088. Intraoperative blood loss was almost the same in both groups. No complications were recorded in both groups, also no recurrence of adenoid detected in both groups.

Adenoidectomy is one of the most common ENT operation [1,2], the main indication is adenoidal hypertrophy that cause nasal obstruction, snoring, obstructive sleep apnea (OSA), otitis media with effusion and sinusitis [2,3]. Traditionally adenoidectomy is done almost blindly with adenoid curette [4]. Recently trials done to remove adenoid under vision either by mirror or endoscopes, also different surgical tools introduced as microdebrider, laser, suction diathermy and radiofrequency [2]. 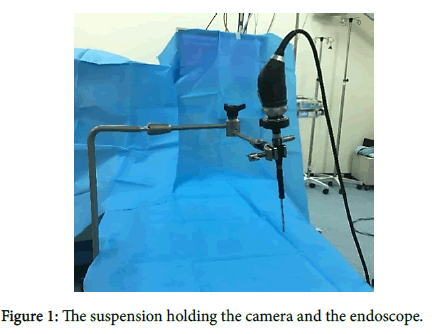 Figure 1: The suspension holding the camera and the endoscope. Figure 2: The setup of TEA during operation. 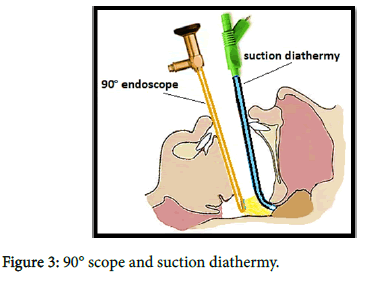 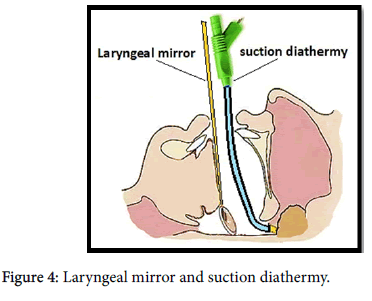 The study was designed as two-group, 40 patients in each group, parallel trial to compare two different clinical interventions. Parents and the patients were blinded. Statistical analysis performed using the Pearson Chi-Square test to evaluate the mean differences between each group for parameters. Statistical differences were considered significant for p<0.05.

All data were stored using Microsoft Excel and STATA software.

After this study has been approved by Institutional Review Board (IRB) medical research committee of Hamad Medical Corporation, and after eligibility had been confirmed with the consent procedures have been completed, Participants randomly assigned, following simple randomization procedures to one of two intervention groups using equal allocation ratio 1: 1.

All children aged between 1-12 years old, without preference between male or female going for adenoidectomy ± myringotomy with exclusion to all adenotonsillectomy cases. However, the plan is to enroll all participants who satisfy the inclusion and exclusion criteria.

The instruments and tools used for data collection are validated tools with permission.

The data collected in out-patient clinic were: Pain score over the first week postoperatively using visual analog score, the incidence of Post-operative bleeding, Evidence of recurrence of adenoid (x-ray or endoscopic examination) at 6 months post-operative.

In group A we used 90 degree endoscope-assisted bipolar radiofrequency suction diathermy (Figure 3). Radiofrequency is High Frequency 4.0 MHz--Low Temperature it involves the use of heat generated by an electric current to ablate or liquefy adenoid tissue.

In group B we used mirror-assisted monopolar suction diathermy (Figure 4).

Table 1: Duration of Surgery for group A and group B.

Table 2: Comparison of the pain score of operative types between two groups.

However, the mean value of the post-operative pain was not significant in both groups p>0.05.

No significant difference in the intraoperative bleeding between the two groups (p>0.05). The overall amount of bleeding was ≤ 5 ml in 99% of patients of both groups.

It is important to note that there was no evidence of recurrence of adenoid tissue confirmed by 6 months post-operative x-ray or nasoendoscope.

All the patients did not have any postoperative complications. None of the patients in either group experienced a post-operative bleeding episode requiring clinical examination or readmission.

The adenoid, or nasopharyngeal tonsil, is a lymph epithelial organ located in a hidden position in the roof of the nasopharynx, it is present since birth and continue to grow until about the age of 7 then gradually regress in size after that.

Adenoidectomy operation is one of the most commonly performed procedures in otolaryngological practice [1]. Techniques and instruments have evolved considerably over the past 2 centuries. Cornelius Celsus described a cold techniques in the first century A.D. and Paul of Aegina in 625 A.D. to the later contributions of surgeons such as Wilhelm Meyer and Samuel J. Crowe in the last centuries [1].

Since then, many alternative techniques have been described, but the traditional technique, using adenoid curette trans-orally is still quite popular [1], although simple and time-honored, it is a blind procedure which can certainly leads to pitfalls, such as incomplete removal, over curetting and trauma to Eustachian tube [5].

Several trials have been made to see the adenoid during surgery, starting with trans-oral mirror, then endoscope used either trans-oral (45° or 70°) or trans-nasal (0°). Different surgical tools are recently used as microdebrider, laser, suction diathermy and radiofrequency and are becoming popular [2].

Where Grade I: Adenoid tissue filling one-third of the vertical portion of the posterior nasal choanae.

Grade II: Adenoid tissue filling from one-third to two-thirds of the choanae.

Grade III: From two-thirds to nearly complete obstruction of the choanae.

Trans-oral endoscopic adenoidectomy (TEA) method consists of an endoscope (90-degree scope) and camera connected to a monitor, the endoscope and camera are supported with multiple joint holding rod. In this technique we used bipolar radiofrequency suction diathermy.

The other method, the trans-oral mirror adenoidectomy (TMA) consists of laryngeal mirror to visualize the adenoid, and a mono-polar suction diathermy were used for removal of adenoid.

In this study we compared between these two methods (TEA) versus (TMA).

The percentage of adenoid grade 4 among the TMA group (group B) was 50% compare to TEA group (group A) which was 37.5%, however this difference was not statically significant p>0.05.

The actual operation time measured from the moment the surgeon started the procedure in both groups, until bleeding control was obtained and the anesthesiologist instructed to wake up the patient. In TEA (group A), in addition to that we add the time of setup the equipment including the endoscope with camera and monitor. This way of measurement of operative time can explain the longer operative time in group A (Figure 5). 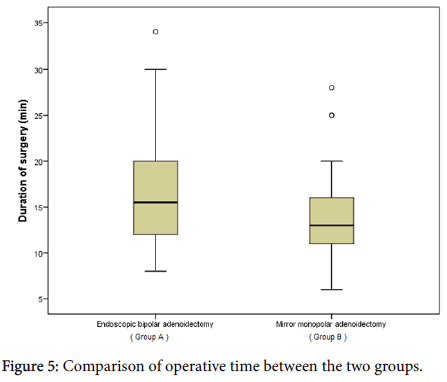 Figure 5: Comparison of operative time between the two groups.

In this study the pain score was more in TMA (group B) than in TEA (group A) evident by visual analog scale. Although this result is not significant statistically, but still it is an advantage for group A due to usage of bipolar radiofrequency suction diathermy (Figure 6) [12]. 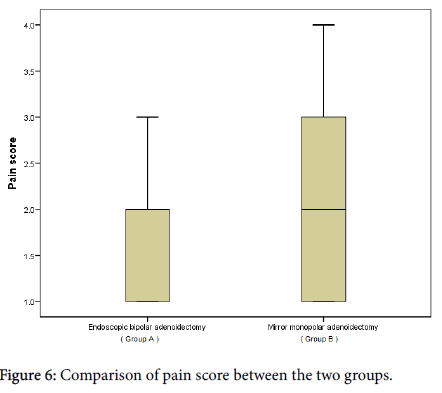 Figure 6: Comparison of pain score between the two groups.

The most important endpoint of endoscopic-assisted adenoidectomy (TEA) is the complete visualization of the operative field provided by optimum magnification of the telescope, which helps in the precision of adenoid removal and also leads to better bleeding control than in (TMA). For these reasons, regardless that TMA has shorter operative time in min, we encourage to use this technique.