Using Antimatter as Fuel for Rockets

The human’s quest to explore the universe results in more innovation and newer technologies to our world. In the urge to go even further through space, it has become necessary to develop new and better propulsion systems. Research shows that antimatter energy is more efficient than any other energy. A spaceship that uses antimatter will need smaller volumes of fuel compared to the typical fuel used nowadays. However, the following research concludes that using antimatter as fuel for rockets is still science fiction and is not yet feasible.

Included in many science fiction books and movies, antimatter is a topic that can bring doubt, fear, and hope to many people. Antimatter can be described as a mirror appearance of normal matter. This implies that antiparticles are the same in regard to the mass of their underlying regular complements, but its electrical charges are upturned. Moreover, an anti-electron has a positive charge instead of a negative charge, and an antiproton has a negative charge instead of a positive charge. When antimatter collides with matter an explosion occurs, and the two particles are converted to pure energy. Antimatter is considered a perfect fuel since all the prevailing mass taking part in the collision between matter and antimatter is converted into energy. This report’s intention is to study the feasibility of using antimatter as fuel for rockets.

Determination of feasibility of antimatter as fuel for rockets employs data from companies that manufacture rocket’s fuel such as NASA, And the U.S. Department of Energy laboratory Fermi lab.

Limitations to the Report

Due to exponential changes and developments in technology, this report regarding the feasibility of using antimatter as fuel as rockets, is valuable and accurate until further technologies regarding creation, capsulation and storage of antimatter are released.

The report will explicitly focuse on the following topics:

Using antimatter as fuel for rockets could be extremely beneficial. Antimatter is the most efficient source of energy in the entire universe, when antimatter meets its equivalent matter; they annihilate each other resulting in an explosion that converts all the mass of the particle and its antiparticle into pure energy. However, the technology required, its cost and storage of the technology required. It is not feasible due to the antimatter make it unfeasible to use as fuel for rockets in today’s world.

Use of spaceships driven by chemical fuel is a primitive technology that may not be of any help to man when planning to explore outer and remote orbits and planets. For instance, sending a space shuttle into the earth’s orbit at a speed of 17,500 MPH requires the rocket to carry chemical fuel equivalent of 15 times its weight; this is a gross inefficiency in space exploration (nda, 2012). The fuel inefficiency greatly limits the effectiveness of chemical based fuels in steering space ships to outer orbits. Moreover, for the spaceship to attain the escape velocity from the earth’s gravitational pull towards the solar system, which requires a speed of about 25,000MPH, more fuel is needed for this difficult undertaking (n.d.a, 2011) [1-4].

In other words, as the figure indicates, spaceships propelled with chemical fuels have had major limitations and are the single cause why man has delayed in exploring outer orbits, which requires significant time of travel and much higher speeds. The amount of fuels required to undertake this endeavor is unjustifiable and may, in fact, be impossible to take along the space ship due to weight limitations. For instance, currently, the average cost to put a single spaceship into space is approximately 450 million USD per every mission, a cost that is too high and a great limitation to exploration. The high cost makes chemical fuels inefficient and a limitation in man’s exploration strategies. With the dwindling economic fortunes in the country, the high cost could lead to scrapping the shuttle program, unless a cheaper option. Considering the high rate of fuel use by spaceships, it becomes impossible for these vehicles to leave for space with inadequate fuel to maneuver the expected orbits. The heavy weight of the fuel leads to high costs and is also a potential risk in case of an accident near the earth’s surface. For instance, any plans to leave the solar system en-route to the nearest star in reasonable time, which may be about 900 years using chemical fuel propelled rockets; the voyage would need about 10137 kilograms of fuel, an amount that by far exceeds the amount of fuel on our planet (nda, 2012). The above limitations of chemical based fuels call for more research towards developing a more robust and efficient fuel to propel spaceships more efficiently and for longer durations if man’s dream to leave the solar system in search of remote stars would be a reality.

In order to deal with the above shortcomings, scientists are forthcoming with different possibilities of propulsion methods. These achievable sources of energy would not be so heavy or expensive, nor would they have as much volume as is currently required of the chemical fuel used for space travel. The following figure shows the efficiency of what is next for fuel to replace chemicals:

The four propulsion methods are seen in Figure 1 (antimatter/ matter, nuclear fusion, ion drive, and solar sail) are considered by scientist as the possible answer for a substitute for chemical based rockets. Antimatter/matter is the most energy efficient fuel source. In other words, as indicated above, an enormous amount of chemical fuel is required for a successful mission to space. However, just a handful of milligrams of antimatter is adequate for this same mission. 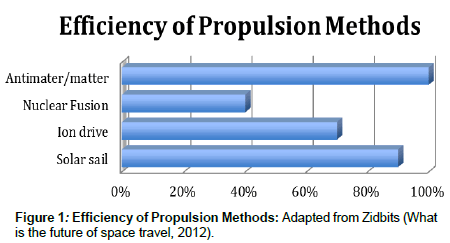 Figure 1: Efficiency of Propulsion Methods: Adapted from Zidbits (What is the future of space travel, 2012).

Why is antimatter so efficient?

When antimatter meets its equivalent matter, they annihilate each other. The neutrinos1 are the only part of this explosion that is carried away. Since neutrinos are considered massless, and energy is equal to the multiplication of mass and the square of the speed of light, they do not influence the energy output (E=mc2). Therefore, an antimatter/matter explosion converts all the mass of the particle and its antiparticle into pure energy. The complete conversion of antimatter to energy is what makes the fuel so powerful and promising in breaking barriers that had been set by chemical fuels. While previous spaceships using antimatter as fuel were designed to use antiprotons, which resulted in high energy gamma rays after annihilation, the newer design uses positrons whose gamma rays have over 400 times less energy than the gamma rays produced using antiprotons (Steigerwald, 2011). This discovery makes use of the new antimatter not only more powerful alternative to chemical fuel, but also more efficient in the reduction of the harmful effects of high energy gamma rays during reactions. Use of positrons in antimatter makes the fuel more environmentally friendly by reducing such high emissions.

“While tons of chemical fuel are needed to propel a human mission to Mars, just tens of milligrams of antimatter will do (a milligram is about one-thousand the weight of a piece of the original M&M candy).” (Steigerwald, 2011)

Based on the scope of efficiency, since antimatter/matter explosion results in a complete conversion of mass into energy, using antimatter as fuel for rockets is, by far, the best alternative to the type of chemical fuel currently used in space trips.

One of the first challenges, when considering using antimatter as a source of energy, is its availability. Collisions of high-speed particles called cosmic rays create antimatter in space. There are large amounts of antimatter in space, but there is no technology capable of capturing this antimatter. When considering our planet, antimatter must be created in particle accelerators. The major restrictive factor is production of antimatter in greater volumes. Data released by the European Organization of Nuclear Research (CEARN) shows that a particle accelerator available for antimatter creation as of today would take approximately 100 billion years to produce 1 gram (or 6.02×1023 atoms) of antihydrogen.

As seen in Figure 2, the Large Hadron Collider (LHC) is a massive internationally funded particle accelerator located in Switzerland.

There are different particle accelerators around the world. The most intense source of antiproton today is the Fermi National Accelerator Laboratory (Fermilab), located in the USA. According to data from the book IT04612E, Fermilab’s record production over a month was in June 2007, when it produced 1014 antiprotons. If it were possible to produce that same amount for 12 months, Fermilab would be able to produce about 1015 atoms, which equates to 1.5 billionths of a gram. If it were possible to annihilate them, the total energy released from it would be about 270 Joules, which is only enough to keep a light bulb turned on for about 5 seconds. Based on the outcomes of this section of the report, the technology to create antimatter does exist. However, even after adding all the production of antimatter created in antiparticle accelerators together, the total world production falls extremely short of the optimistic hopes of using antimatter for space fuel.

How Antimatter Can be Stored

Considering that antimatter cannot be brought into any contact with matter, there is no possibility of having it inside a physical container. The answer for antimatter storage comes with a purely magnetic trap in vacuum.

The trap used in some experiments conducted lately is called Penning trap, where charged positrons and antiprotons can be held by electricity, and magnetic forces. The drawback of these traps is that they cannot store many particles since these particles naturally repel one another. (Alpha, n.d.a). Considering that positrons have an electric charge and will tend to naturally repel each other, storing about 0.0001% of the positrons required for a successful voyage to mars would result in enormous and incomprehensive tons of repelling electric force acting on the fuel tank walls (Anderson, 2010). A fuel tank that can withstand such an enormous pressure may not be possible to make with the current level of technology.

The storage of antimatter is costly, and, with current technology, not effective enough to trap large quantities of antimatter, as would be needed for space travel.

Summary and Interpretation of Findings

In order to go further with space travel a, new propulsion system is needed. This report explores the idea of utilizing antimatter as fuel for rockets. It focuses upon efficiency, availability, technology, and storage. Research has hinted at the possibilities of developing a positron, which would steer spaceships to outer orbits in much higher speeds and for extended periods by using just a handful of the fuel. However, developing this fuel on such a large scale is still a mirage. There are huge challenges in having effective particle accelerators making positrons, storing the particles and even developing a fuel tank that would withstand the huge electric forces generated by these particles. Therefore, though science has made it possible to develop such fuel, the use of antimatter is not feasible currently unless more advanced technologies to solve these currently limitations are put in place.

A material made of antiparticles having the same mass as particles of any typical matter but having an opposite charge.

Waves with the smallest wavelengths and the highest amount of energy known today in the electromagnetic spectrum.

A particle accelerator located in Switzerland where most particle science practices are carried out.

A positive electron which is a subatomic particle or antimatter with a positive charge of the same magnitude as an electron.

A vehicle used to travel to earth’s outer space and beyond; an exploration vehicle.