Objectives: Vestibular Schwannoma is a benign schwann’s cell tumor, whose origin remains obscure. It presents a slow growing rate, often associated with subtle symptoms that may take many years to be noted. Unilateral hearing loss, usually progressive is the most common presenting complaint and its features doesn’t correlate with tumor size. Atypical presentation should be considered likewise sudden hearing loss, vertigo or tinnitus. Incidental findings correlated imaging exams are increasing last decades. Subjects and methods: We present a retrospective study of 38 patients, who were diagnosed vestibular schwannoma, between january 2010 and june 2018. We reported the initial symptoms at time of diagnosis as well as the hearing outcome correlated tumor size. Results: The mean age of our patients was 53 years old and women represented twice as much as men. Asymmetrical hearing loss was the main inaugural symptom in 39,4% followed by isolated tinnitus in 26,4% of the cases. The smaller tumors were more prevalent than greater ones. Regarding the correlation between hearing impairment and tumor dimension, we objectified statistical significance for their variance, but not in a linear proportion. Conclusion: Acoustic neuroma presenting symptoms are changing, although unilateral hearing loss still is the main complain. The audiometric pattern is unpredictable for what large-size tumors may not affect hearing acuity.

Vestibular schwannoma is a benign tumor of the schwann cell in the vestibular division of the cochleovestibular nerve. It commonly arises in the internal auditory canal and may continue into the cerebellopontine angle, comprising approximately 5%-10% of all intracranial tumors [1,2]. The etiology of vestibular schwannoma is still unknown, even if the most widely accepted hypothesis is the embryologic theory, which consider that it emanates from immature cells existing in the adult superior and inferior vestibular ganglia [3,4]. In rare cases, the development of bilateral vestibular schwannoma is the hallmark of Neurofibromatosis Type II, a genetic disease with dominant inheritance pattern.

Its incidence is about 6%-10% per year, though the diagnosis associated with incidental findings is growing up [2,7]. Investigation of these patients includes thorough clinical examination, audiological evaluation and frequently magnetic resonance imaging (MRI) of the internal auditory canal (IAC), cerebellopontine angle (CPA) and brain. Nowadays, the high quality of MRI scanners makes it possible to identify the smallest tumors as well as unexpected findings which may have clinical significance [7-9].

This study aims to analyze the most common clinical features in the initial presentation of patients with vestibular schwannoma in our department. We also intend to characterize the impact of hearing loss, according to the tumor’s size.

We conducted a retrospective study with patients admitted in our hospital between January 2010 and June 2018, whose work-up revealed vestibular schwannoma. All the patients underwent a meticulous medical history and physical evaluation that were completed with pure tone audiometry, speech audiometry and imagiological study with MRI. The tumor size was recorded into six main grades, based on House classification:

Tinnitus handicap was registered as mild, moderate or severe and facial nerve function was determined using the House-Brackmann grading scale [10]. For this study, audiometric asymmetry was defined as interaural difference of ≥ 20 dB at the medium frequencies between 500 Hz and 4000 Hz and an interaural speech discrimination score difference of ≥ 20%.

Statistical analysis was accomplished in SPSS Statistics 22.0® for Windows®. The study of hearing outcome was done by Coefficient of Determination, where R2 ranges from 0 to 1. If R2=1, the variance in the dependent variable is perfectly explained by the independent variable. Mann-Whitney U was used to assess the differences between pure tone averages among different size tumors. A p-value less than 0.05 was considered statistically significant and results were compared with literature.

A total of 38 patients with vestibular schwannoma were analyzed. In this sample, 25 were female (66%) and 13 were male (34%). The left ear was the most affected in 22 cases and we noticed 3 cases with bilateral ear involvement, associated with Neurofibromatosis Type II. Mean age at presentation was 53 years (standard deviation=7,2), ranging from 17 to 76 years old. Concerning inaugural symptoms, 39,4% presented with unilateral progressive hearing loss, 8% of them associated with ipsilateral tinnitus. Tinnitus separately was the second-most frequent complaint in 26,3% and vestibular schwannoma was an incidental finding in 15,8% of these patients. Vertigo sensation was objectified in 7,9% and sudden unilateral hearing loss was mentioned by 5,3% (Table 1).

In the matter of tinnitus intensity, 54% referred severe tinnitus that interfered with work and sleep; 29% suffered from moderate tinnitus, which could be heard every day and 13% from mild tinnitus, only heard when the ambient noise is low.

On examination, 2 patients presented facial palsy, classified as grade II in House-Brackmann scale. These patients also have an abnormal trigeminal sensation, without other neurodeficit.

Regarding to the elapsed time since the onset of the symptoms and the diagnosis, 5 (15,6%) patients have been complained for less than 6 months, 10 (31,3%) patients for 6 months to 1 year and 17 (53,1%) for more than 1 year. Six patients were asymptomatic. Tumor size measured in MRI images was subdivided according to the grades named above. We noticed 9 intracanalar tumors. Grade I accounted 4 of all tumors, grade II represented the majority of cases with 15 tumors, grade III 6 tumors and grade IV contained 4 tumors. Neither tumor was included in grade V (Table 2).

In terms of audiometric results at initial evaluation, 6 patients had normal pure-tone audiograms between 500 and 4,000 Hz. Hearing loss was moderate in 15 cases, mild in 8 cases, and severe in 5 cases. Four patients presented profound hearing loss (Table 3). 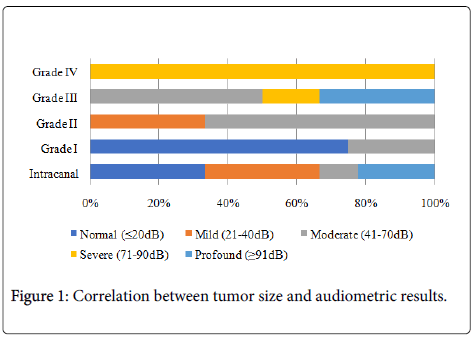 Vestibular schwannoma is an important disease, whose incidence is increasing in the last years. Stangerup et al. from Denmark revealed a huge increase in patients being diagnosed over a 25-year period [11]. According to their study, the frequency of large tumors is declining in contrast to smaller tumors for which appearance is raising. Kleijwegt et al. have published analogous results over a ten-year period [12].

The symptoms are variable and determined by the size, site and nature of the tumor. In 1977, Johnson reported a series of 500 cases of vestibular schwannoma, demonstrating a percentage of 95% with unilateral sensorineural hearing loss, the same proportion reported by Brackmann and Arriaga, later in 1993 [13]. Nowadays, with a higher availability of MRI scans, the diagnosis based in incidental findings is becoming more common, which justifies the detection of small lesions in asymptomatic patients who undergo radiological imaging for other reasons [14]. Even then, the random diagnosis of vestibular schwannoma remains relatively low as suggested Lin et al. who analyzed 505 patients of which only eight (1,6%) provided these lesions [15].

In the present study, the unilateral progressive hearing loss was the chief complaint, encompassing 15 patients; despite we had objectified less significant acoustic symptoms, compared to some authors. We also observed two patients with sudden hearing loss as inaugural manifestation, an uncommon finding, although we know these tumors can produce it at the rate of a 3%-23%. Yanagihara et al. considered the small tumors tends to induce sudden hearing loss more often than medium and large tumors. It was supported by the idea of an eventual compression of the internal auditory artery in the IAC [16]. We, already, obtained the same results, since the profound hearing loss in the intracanal tumors corresponded to sudden hearing loss patients.

Tinnitus was our second-most presenting symptom (10%) and this proportion is concordant with literature [1]. Mostly, it is continuous and interferes with social relationships and sleep disturbances like we verified in 15 patients. Its appearance with concomitant hearing loss occurred in 3 patients. This is an uncomfortable symptom, frequently the most likely cause of otorhinolaryngologist appointment. We would emphasize that in literature the presence of tinnitus is statistically associated with the tumor growth, even though it was not explicit the underlying patophysiological mechanism [17,18].

Vertigo is another complaint vestibular schwannoma-related with a wide various spectrum. We detected vertigo in almost 8% of the cases, but some authors consider it as a presenting symptom in 15% [19]. This low number isn’t totally clarified, although it may be associated with the slow growth of vestibular schwannoma and the consequent sufficient time for central compensation.

Facial palsy was another symptom, founded in 2 patients, with a paresis mainly evident in the nasolabial fold during facial movement, unnoticeable at rest. These patients also referred trigeminal involvement without other impairment sensations. They, particularly, presented the major tumors detected in the MRI.

In terms of tumor size, our data revealed a predominance of medium tumors, included in the grade II, where the maximum size achieved was 20 mm. The smaller tumors (intracanal and grade I) accounted together to about 34% of the patients, a little more prevalence than large tumors (grades III and IV), accounting for 26%. Looking at the average period between symptoms onset and clinical presentation, just 5 patients complained for less than 6 months. Sudden hearing loss corresponded to two of them, the other two presented facial palsy and one patient referred tinnitus. The majority mentioned a gradual impairment of hearing and tinnitus, longer than one year.

Concerning to hearing assessment, there was not a direct proportionate correlation between auditory involvement and tumor size. However, the larger tumors were associated with greater levels of hearing loss, with a Pure Tone Average ≥ 70 dB as compared with Pure Tone Average ≥ 45 dB in the small tumors. This difference was statistically significant (p<0,05). We also obtained a speech discrimination index ≥ 60% in 75% of the patients and a speech discrimination absence in sudden hearing loss cases.

It’s generally agreed that asymmetrical hearing outcome should raise suspicion about vestibular schwannoma diagnosis; however, some authors addressed these tumors presenting with normal or symmetrical hearing. Lustig et al. published a review of 29 patients where identified vertigo as the main diagnostic symptom, followed by cranial nerve V and VII abnormalities with a surprising average tumor size of 19 mm [20]. Valente et al. also described four cases of vestibular schwannoma in whom unilateral tinnitus was the common denominator and the auditory levels were normal [21].

This study contains a low number of patients, which can provide some bias, in order to assume objective facts. Nevertheless, it evidences a various range of presenting symptoms besides the typical ones. Our hospital covers many patients with limited health literacy that can account for the elapsed time since symptoms to diagnosis (more than 1 year in almost half). Probably it could, also, justify the higher rate of large tumors we achieved. On the other side, we have an ageing population consuming radiological exams, periodically, what promotes the emergence of these symptom-free diagnosis and other atypical presentations, already assessed by neurologists or internists.

Accordingly, we should consider other signs likewise unilateral hearing loss, yet it remains the first symptom of vestibular schwannoma.

Auditory unilateral impairment should raise suspicion for vestibular schwannoma diagnosis, although atypical presentations along with incidental findings must be explored due to increased prevalence. The tumor size at diagnosis can predict the degree of hearing threshold and speech discrimination involvement, but without a linear correlation. 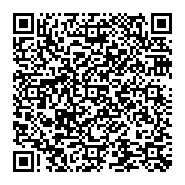