Plasmacytoid urothelial carcinoma is a rare and poorly understood variant of urothelial bladder cancer, which is believed to carry a worse prognosis. A 69 year old male presented with urinary symptoms and was diagnosed with plasmacytoid urothelial carcinoma of the bladder. He was found to also have rectal thickening on initial imaging, which was investigated extensively but no malignant pathology was identified. He underwent radical cystoprostatectomy then adjuvant chemotherapy. 5 months after completion of treatment he developed abdominal discomfort with Computerised Tomography scan showing previously investigated rectal thickening to have progressed to involve the whole colon, in keeping with metastatic disease in the form of linitis plastica of the large bowel. He also developed left thigh pain and was found to have a soft tissue metastasis of the left adductor muscle. Despite treatment with immunotherapy his condition worsened and he developed large bowel perforation and passed away. To our knowledge this is the first report of plasmacytoid urothe

Bladder cancer is the tenth most common cancer in the United Kingdom and the seventh most common cause of cancer death [1]. Most patients present with superficial tumours, which remain indolent after initial treatment [2]. Muscle-invasive bladder cancers carry a much worse prognosis, with metastatic disease carrying a median overall survival of 12-14 months [3]. Bladder cancer most commonly metastasises to lymph nodes, bone and lung [4].

Around 75% of bladder cancers are classified as pure urothelial carcinomas, with the remaining 25% comprised of other histological variants in pure form (such as small cell or squamous cell carcinoma) or as differentiation associated with urothelial carcinoma [5]. The importance of variant histologies has become increasingly understood and thus relevant to clinical practice.

Plasmacytoid urothelial carcinoma (PUC) is a variant histology first described in a case report in 1991 [6]. A small number of case series and retrospective cohort studies have subsequently described this rare variant, thought to comprise 1% of urothelial carcinoma as a more aggressive form of bladder cancer.

PUC has been described to display several histological and clinical characteristics distinguishing it from pure urothelial carcinoma and other variant histologies [7]. PUC tumour cells demonstrate eccentrically placed nuclei with abundant eosinophilic cytoplasm [8]. They typically express the marker CD138 and are highly proliferative with most cells positive for Ki-67. E-cadherin, a cell adhesion marker, is often downregulated or negative, which has been hypothesised to explain the ‘coat sleeve pattern’ of local growth described.

Whilst awaiting further management, the patient suffered increasing constipation and weight loss. A further CT scan showed rectal thickening and he therefore underwent Magnetic Resonance Imaging (MRI) of the pelvis, which showed significant bladder wall thickening extending through the right seminal vesicle and abutting the rectum with rectal wall thickening seen superior to this point. Flexible sigmoidoscopy was performed but biopsies of the rectum did not reveal malignant pathology. Full staging, completed with CT chest, showed no evidence of distant metastatic disease (Figure 1). After discussion at the Bladder Cancer Multidisciplinary Meeting (MDM) and Pelvic Cancer MDM, recommendation was made for total pelvic exenteration to maximise possibility of clear surgical margins, followed by adjuvant systemic treatment. On exploration intra-operatively there was no apparent involvement of the rectum and therefore instead a cystoprostatectomy with ileal conduit urinary diversion was performed. The patient recovered well post-operatively.

Five months after completion of the chemotherapy, the patient complained of left sided groin pain causing significant discomfort on mobilisation, as well as bloating. Repeat imaging was organised; CT scan of the chest, abdomen and pelvis showed no confirmatory features of disease relapse, but revealed diffuse mural oedema of the colon and associated inflammatory pericolic change, suggestive of a colitic process (Figure 2). MRI pelvis showed no evidence of local recurrence but demonstrated marked oedema within the left adductor magnus muscle. As a result of the CT findings, colonoscopy was attempted but narrowing prevented progress beyond the rectosigmoid junction. MRI femur was performed, confirming unusual changes with diffuse oedema and enhancement seen within the left adductor magnus muscle belly (Figure 3). These findings were reviewed at the regional soft tissue cancer meeting, which recommended interval imaging to follow-up the abnormalities seen. 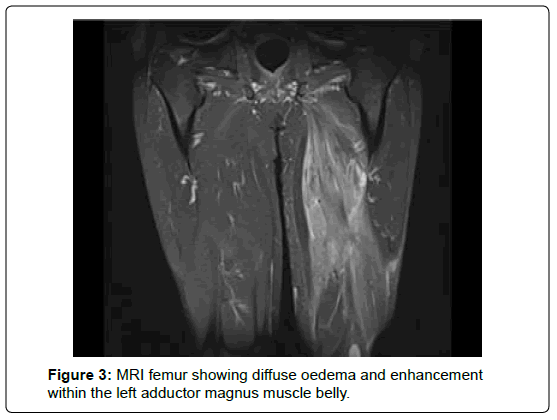 The results of the patient’s investigations were re-discussed at the Bladder Cancer MDM and felt to be highly suspicious for recurrence. Whilst awaiting scope-guided colonoscopy, he was admitted to hospital with abdominal pain and vomiting. CT scan showed small bowel obstruction, felt by the surgical team to be secondary to adhesions, and he was managed conservatively with symptoms settling without need for further intervention. After discharge he had recurrent symptoms with worsening abdominal pain and bloating. A further CT scan showed no evidence of obstruction but persistent presence of pancolitis. His case was again discussed at MDM, and the consensus was that the patient’s symptoms were likely related to metastasis in the form of linitis plastica of the large bowel. His bowel symptoms were again managed conservatively and he was started on a reducing regimen of dexamethasone for symptomatic benefit. After a prolonged admission he was discharged following improvement in his symptoms. Following discharge repeat MRI femur showed progression of the soft tissue changes in the posterior thigh consistent with a progressive soft tissue metastasis. He was reviewed in the outpatient clinic and consented for immunotherapy treatment (pembrolizumab).

After one cycle of pembrolizumab he was admitted to hospital again with diarrhoea and abdominal pain. He was treated empirically with broad-spectrum antibiotics, as well as steroids to cover for possible immunotherapy-induced colitis. CT imaging showed persistent ongoing circumferential thickening of the whole colon and rectum. After initial improvement, he subsequently developed more severe pain and repeat CT scan showed free intra-abdominal air consistent with perforation and large volume ascites (Figure 4). As the perforation was felt to be secondary to progressive malignancy, surgical management was adjudged not to be appropriate, and the patient deteriorated quickly and passed away. Several studies have shown that PUC appears to present at more advanced disease stages [11]. It behave more aggressively than pure urothelial carcinoma, with poorer survival rates seen in both localized and metastatic disease described in one of the largest retrospective cohort study investigating PUC, comprising of 31 patients [12]. This study showed median overall survival in PUC patients treated with cystectomy and adjuvant chemotherapy (the same management received by the patient discussed above) to be 27.4 months compared to 62.6 months for pure urothelial carcinoma patients.

This patient’s disease relapsed in an unusual manner in the form of linitis plastica affecting the whole of the large bowel. This pattern shows some degree of similarity to a previously reported case of a patient who relapsed with PUC metastasis to the duodenum after cystectomy [8]. With the benefit of hindsight, it is likely that the rectal thickening seen on this patient’s initial imaging represented metastatic disease, particularly as this thickening subsequently progressed to involve the entire colon as the patient’s clinical condition worsened. Despite extensive investigation no histological evidence of this was found prior to proceeding with surgery, a pitfall reported previously in the diagnosis of linitis plastica with endoscopic biopsies often not yielding cancer cells due to mucosal sparing [10]. Although to our knowledge this is the first case to be described of PUC metastasising as linitis plastica of the large bowel, linitis plastica within the bladder as a pattern of local invasion of PUC has been described [12]. Suggesting a distinct biology underpinning the manner in which PUC progresses compared to pure urothelial carcinoma. This patient also developed a skeletal muscle metastasis within the left adductor magnus muscle, another uncommon site of disease relapse.

As this patient had progressive disease within 12 months of completing adjuvant platinum-based chemotherapy, he received immunotherapy as second-line treatment rather than second line chemotherapy. There are few published reports of PUC treatment with immunotherapy, with one report describing 2 patients who showed short-lived responses to checkpoint inhibitor treatment before disease progression [13]. As this patient only received one cycle of treatment it is difficult to draw any significance from his failure to respond.

There remains no level one research specifically investigating the best oncological management for PUC. Given the increasing availability of new systemic agents for the treatment of metastatic bladder cancer, such as immunotherapy, it remains to be seen whether these have a clear role in the treatment of PUC. For now consensus remains that patients should receive early radical treatment, with high vigilance required for early detection of relapse given the aggressive nature of the disease, which can relapse in atypical sites as seen in this case.