Cytogenetic abnormalities are established as important prognostic factor for Leukemia. After the first report of a ring chromosome in a case of human leukemia ring chromosomes have been infrequently (<10%) detected in hematopoietic neoplasias. However, ring chromosomes are part of complex karyotype associated with a poor prognosis. In this study we document a case of 21 years old Acute Lymphoblastic Leukemia (ALL) patient. Short term unstimulated bone marrow (BM) and peripheral blood lymphocyte cultures were performed. The karyotype report was 46, XY, r (2)(p23-25q33-37). Fluorescence in-situ hybridization using WCP for chromosome 2 confirmed presence of ring chromosome 2. In most cases, there are no confirmatory reports on an association between a specific leukemia subtypes with ring chromosome. This case report may constitute a distinctive subtype. Further analysis of such cases is required to define complete disease entity.

Acute lymphoblastic leukemia (ALL) is a neoplastic disease characterized by clonal expansion of leukemic cells in the bone marrow (BM), lymph nodes, thymus, or spleen. ALL is a genetic disease because essentially most patients harbor acquired genetic alterations (somatic mutations) that contribute to the increased proliferation, prolonged survival, and/or impaired differentiation of the lymphoid hematopoietic progenitors. In the majority, albeit not all, patients diagnosed with ALL, one or more of these genetic alterations are in the form of nonrandom numerical or structural chromosome aberrations that can be detected microscopically [1].

Identification and understanding the underlying genetic abnormalities in ALL play significant role, not only in the diagnosis but also in predicting the prognosis and, ultimately, understanding the leukemogenesis [2]. The cytogenetic abnormalities have been established to be very important for the prognosis of ALL patients [3]. Approximately 75% of childhood ALL cases harbor recurrent genetic abnormalities, including aneuploidy or structural chromosomal arrangements, detected by conventional karyotyping and fluorescence in situ hybridization (FISH) [4]. Translocations t(9;22)(q34;q11) [BCR-ABL1], t(12;21)(p13;q22) [ETV6-RUNX1 (TEL-AML1)], hyperdiploidy, and translocation t(4;11)(q21;q23) [MLL-AFF1(AF4)] in infants, are found at the highest frequency in childhood B-ALL. Other recurrent cytogenetic abnormalities include hypodiploidy and translocation t (1; 19)(q23;p13) [TCF3-PBX1 (E2A-PBX1)] [5]. The ring chromosome is a circular, structural abnormality composed of either multiple chromosomes or a single chromosome with loss of genetic material at telomeres one or both ends. This chromosomal rearrangement is often unstable with frequent recombination and may be accompanied by either loss or amplification of genetic material [6]. Considering that ring chromosomes are rare in ALL, it is difficult to risk stratify patient prognosis, particularly when the ring chromosome occurs as the sole abnormality.

We report here the first case of ring chromosome 2 as sole abnormality in ALL patient. The karyotype report was 46,XY,r(2) (p23-25q33-37) it shows presence of ring chromosome 2, which was confirmed using WCP FISH for chromosome 2 in all examined metaphase plates. Patient was expired within 6 months of diagnosis which indicates that there might be loss of some tumor suppressor genes from telomeric region of chromosome 2 which are responsible for leukemogenesis and shows poor prognosis.

Unstimulated culture of bone marrow aspirate was set up in RPMI-1640 medium supplemented with 20% Newborn Calf Serum, L-glutamine, and antibiotics (penicillin and streptomycin). The cells were cultured in incubator at 37°C followed by overnight incubation in presence of Colcemid (10 μl/8 ml of culture). The cultures were exposed to hypotonic solution (0.075 mol/L KCl) and fixed with Methanol:Acetic acid (3:1). The slides were prepared by air dry method and banding was carried out using Giemsa Trysin-EDTA as per standard protocol [7]. Twenty metaphases were analyzed and karyotyped. Karyotypes were described according to the International System for Human Cytogenetics Nomenclature 2013 [8]. 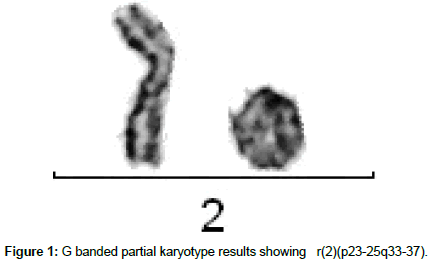 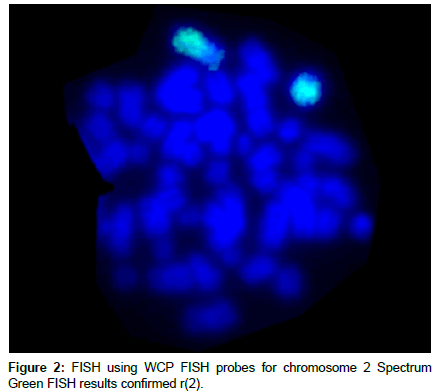 Chromosomes are often regarded merely as static containers for genetic information. However, it is now becoming increasingly clear that chromosomes are highly dynamic structures with a tightly regulated organization. Normal DNA replication results in two linear sister chromatids organized in a parallel configuration so that symmetrical separation can occur at the metaphase-anaphase transition. However, a change in topology from linear to circular may totally disrupt this sequence of events. This is an attempt to delineate the consequences of such ring-shaped chromosomes in human cells. Previous studies have demonstrated that the initial formation of ring and dicentric chromosomes in malignant tumors can result from telomere shortening and subsequent fusion of chromosome ends [9].

In the present study out of 273 ALL patients; we have observed a case with ring chromosome 2. Literature reported that chromosome 2 was involved in less than 1% cases, of all rings formation cases in ALL [6]. In leukemias, for instance, the presence of ring chromosomes seems to be associated with poor prognosis. In some tumor sub entities, they are so frequent and typical that they can even serve as cytogenetic hallmarks for differential diagnosis [6]. In the present study, 0.6 month survival indicates shorter survival and poor prognosis. In Mitelman database, only one case described with r (2) as sole abnormality in 1996 by Martinue et al. [12]. Hence, the case is considered as rare finding [13].

Ring chromosomes come to clinical attentions either in association with developmental anomalies at the beginning of life or with telomere shortening in ageing and neoplastic cells. It is likely that a transition from a DNA-damage sensitive to a DNA-damage tolerant state explains the high instability of rings in some tumour cells compared to those in non-neoplastic cells. However, many tumours show a pattern similar to that of normal cells. Two main modes for chromosomal reorganization in tumours. In type 1 non-neoplastic cells, ring chromosome structure is relatively conserved: rings may be duplicated or lost, but structural rearrangements are rarely maintained in the cell population [14]. In type 2, rings show extensive structural variability and provide a means for gene amplification. Ring chromosomes are thus illustrative proofs that chromosomal behavior is not only a function of straightforward molecular interactions; chromosomal topology and the physiological context in which a certain chromosome aberration occurs must also be taken into consideration [14].

The case reported here together with conventional karyotype and WCP FISH (Molecular cytogenetics) finding highlights the importance of WCP FISH for patients with ring chromosomes. In accordance to literature our result exhibit that ring chromosomes are associated with a poor prognosis. It also showed a concordance between FISH results and G-banding analysis. Application of FISH on metaphases permitted to increase the potentials of conventional cytogenetics.