A Study on Stability of Acrofacial Vitiligo

Introduction: Acrofacial vitiligo being cosmetically disfiguring, can affect patients self-esteem, employability and interaction with society. The resistant nature if this form of vitiligo adds to anger
and disillusionment in the affected individual. The defiant form in addition to its unstable nature necessitates the further study on acrofacial vitiligo.

Objectives: To determine the clinical morphology with respect to stability of Vitiligo. Materials and Methods: A cross sectional study was done over a period of one year comprising of patients with acro-facial vitiligo. Relevant investigations including histopathology and patch test were done wherever necessary.

Results: A total of 191 cases of acrofacial vitiligo were included in the study. Among stable acral vitiligo (59.48%), ill-defined margins were seen in 84.61% and dorsum was the commonest
site (23.57%). Among unstable Vitiligo, joint was predominantly involved (27.03%).

Conclusion: Being prone for injuries, acrofacial areas are unstable. Well defined margins do not strike to the stability of acral vitiligo and signs of activity can be seen even in stable vitiligo. Hence unlike vitiligo of other areas, where well defined margins can be a marker of stable Vitiligo, margins may not be a scale for defining the stability of acral Vitiligo. Involvement of bony prominences could indicate unstable course and least involvement of proximal area of the phalanges may indicate its unstable nature.

Pigmentary changes of skin particularly vitiligo can be psychologically devastating, affecting individual’s self-esteem, employability and interaction with people which are due to the disgrace associated with it and the fear of being an outcaste. This stigma is more commonly encountered with depigmentary disorders particularly when it affects exposed parts of the body. It is more frequent in darker skin type like that of Indians as there is a striking color contrast between the affected skin and the normal skin.

Acro-facial areas include the dorsum of hands and feet, fingers, toes, palms, soles and periorificial areas of face [1]. Vitiligo is the most common depigmenting disorder, which affects 0.5-1% of the worldwide population [2]. Recently, the prevalence of acrofacial depigmentation is on rise. This may be attributed to increased social and cosmetic awareness; increased immigrants, occupational and household exposure to products which are irritant to skin.

The depigmentation occurring secondary to Vitiligo typically affects the exposed areas like the fingers, knuckles, around the eyes and mouth [3]. Resistance to treat acral vitiligo is basically due to unstable nature of its stability leading for further challenges which need to be answered. Also the stability of Vitiligo may vary with different areas in same individual hence, detailed study on stability and its association with morphological aspects of acrofacial vitiligo is important which is lacking in English literature. We attempted to address all these issues in our study.

Objectives of the Study

To determine the clinical morphology with respect to the stability of acral vitiligo.

The present study was a cross-sectional study conducted over a period of one year from January 2013 to December 2013. The study population comprised of all patients presenting with acro-facial vitiligo. The sample size was 191 cases.

Patients of all age groups and both the sexes presenting with acrofacial Vitiligo were included.

Vitiligo universalis and segmental vitiligo other than acro-facial areas were excluded.

Ethical clearance for the present study was obtained from the Institutional Ethical Committee Rajarajeshwari Medical College and Hospital Bangalore.

In the present study, detailed history regarding occupational exposure, onset of lesions, infection, insect bites, trauma and reaction following topical medications, surgeries and family history of similar lesions was elicited, this was followed by cutaneous examination in all cases presenting with acrofacial vitiligo. This was followed by complete cutaneous and systemic examination. Written consent from the patient or from the parent/guardian in case of minor was obtained. Blood investigations including complete haemogram, Erythrocyte Sedimentation Rate, liver function test, blood Urea, serum creatinine, and urine examination was done in all patients. Anti-Herpes simplex 1 and 2 IgG /IgM antibodies and Tzanck smear was done in presence of depigmentation associated with vesicles. Patch test was performed if depigmentation is suspected to contact dermatitis. Digital photography of the depigmentary lesions was taken in all patients. In doubtful cases, skin biopsy for histopathological evaluation, was carried out to establish the diagnosis.

The data collected in this study was analyzed statistically by entering the data in MS Excel. The quantitative variables were described by computing Mean, SD, percentages. The qualitative variables were described by computing proportion and percentages. The association between two categorical variables was found by computing Chisquare test and where ever the expected cell frequencies in a 2 × 2 contingency tables less than 5. The Fishers exact probabilities were computed. The differences between two proportions were tested using Standard Normal Test (Z-test). The results were considered statistically significant whenever the p-value is ≤ 0.05 and statistically highly significant whenever it is ≤ 0.001. 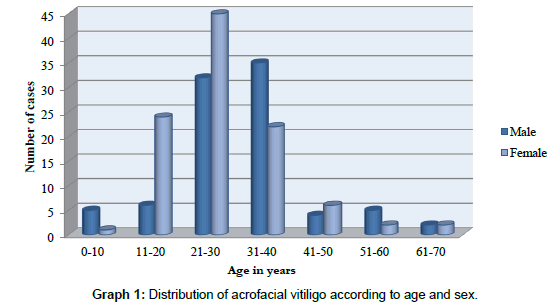 Graph 1: Distribution of acrofacial vitiligo according to age and sex.

Note: Here, the cases having only facial involvement were excluded

Table 2: Distribution of acrofacial vitiligo with respect to margin and stability.

In stable acral vitiligo involving the feet, dorsum was predominantly involved and was seen in 47(36.15%) cases, followed by combined involvement in 31 (23.84%)

In unstable acral vitiligo too, dorsum was predominantly involved in 39(30%), followed by combined distribution in 7(5.38%) cases (Table 3) (Graph 3).

Graph 3: Distribution of acrofacial vitiligo with respect to margin and stability.

Table 4: Site distribution of acral vitiligo involving the dorsum of hand and dorsum of feet.

Disorders of depigmentation are of great concern to patients of darker skin shade like that of Indians because of the marked contrast between the affected skin and normal skin. Stability of vitiligo may vary with different areas in an individual [4]. We tried to correlate morphological variations with stability of each area on both hands and feet in acral vitiligo. This helps us to decide on choosing treatment options either medical or surgical mode.

This study helps in localizing the site distribution and helps to correlate its association with stability in vitiligo cases. Such elaborate characterization of the profile of acral vitiligo with respect to site distribution has not been attempted so far.

Maximum number of acrofacial vitiligo was seen in third decade in 77(40.31%) cases. These findings were similar to the studies conducted on vitiligo by Gopal et al. [9] and Shajil et al. [10] where mean age was 23 years and 25.59years respectively. Conversely in studies conducted on vitiligo by Kar et al. [11] and Rajpal et al. [12] the peak incidence of vitiligo was noted in age group of 0-20years and 11-20 years respectively. According to a study by R. Speeckaert et al [13] it was noted that the depigmentation involving the acral areas occurs commonly at a relatively long disease time and hence seen in older age group. Though Vitiligo is a disorder that can affect all age groups, the peak incidence is in the younger age group. This could be due to cosmetic concern and due to early reporting of cases. In our study, the females outnumbered the males (1:0.8). The following studies conducted on vitiligo, show female preponderance which was found to be consistent with our study, Reghu et al. [14], (M:F -:1:1.1), Shajil et al. [10] (M: F 1: 1.6) and Shah et al. [6] (M: F 1: 2.1). However, there are studies showing males marginally outnumbering females which include Krupashankar et al. [11] (1.05: 1), Gopal et al. [9] (1.17: 1).Conversely vitiligo can affect both the sexes equally as seen in studies conducted by Sarin et al [15], Kar et al. [11]. The female preponderance in our study can be explained by the growing concerns with respect to cosmetic awareness and apprehension of matrimonial alignment.

Face being the most exposed part of the body and hence its involvement would initiate the need for medical consultation. It might also be due to young patients with allergic rhinitis or atopic eczema who often have tendency to rub their eyes [13]. However; in our study we found only one case involving the eyelids.

We classified our patients as stable and unstable vitiligo based on IADVL task force which defines stability as a patient reporting no new lesions, no progression of the existing lesions and absence of koebner phenomenon during the past one year. In a study by Jha et al. [16] 1 year was taken a period of stability.

In unstable acral vitiligo, dorsum was predominantly involved in 30%, followed by sole 0.77%. We attribute that the predominant involvement of the dorsum of hands and feet in vitiligo to be the same as the depigmentation involving these sites as described earlier. The least number of cases involving the palms and soles could be explained by the fact that the involvement of this site could be overlooked as it is normally lighter shaded compared to dorsum and it may not cosmetically alert the patients with palm and soles involvement to visit dermatologist when compared to involvement of dorsum. In addition, involvement of the dorsum has strikingly distinct margins due to the color contrast between diseased skin and the normal skin and also the skin on the dorsum of hand and feet being thinner can be more prone to develop depigmentation.

Involvement of proximal phalanx may play significant role in pointing at stable vitiligo. Least involvement of proximal may indicate its unstable nature. Acral vitiligo involving palmar aspect of the hand was seen in 70 (36.65%) cases. In both stable and unstable vitiligo involving the palms, distal phalanx was predominantly involved and the differentiation was insignificant statistically. Next common site involved was thenar eminence 28.57% and 19.35% in stable and unstable cases respectively which was also not significant. All these factors points towards the role of koebnerization in acrofacial vitiligo where distal phalanx is more prone for trauma. Hence, site distribution play minimal role as a deciding factor on stability if palmar vitiligo (Figure 1). 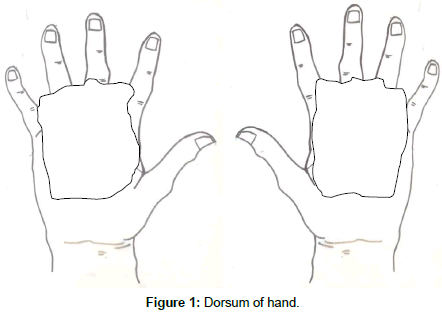 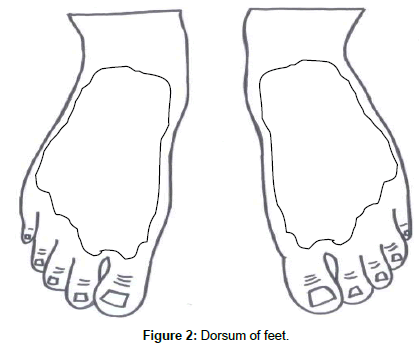 We don’t have similar studies in literature to compare our findings.

Acral vitiligo more commonly affected dorsum of the hands and feet compared to palms and soles. Higher incidence of acral vitiligo in our study is attributed to acral areas being prone for injuries and subsequent development of koebnerization.

Study on larger population is essential for further affirmation of these clinical findings.

The authors declared no potential conflict of interests with respect to the research, authorship, and/or publication of this paper.