About the 3D Modelling of Jacquard Warp Knitted Structures

The aim of this work is to present the theoretical considerations and modelling issues, connected with the three dimensional modelling of jacquard warp knitted structures.

The three dimensional modelling of general warp knitted structures is a very complex task, which requires several steps to be performed in the right way and in the right sequence. The early works in this area [1,2] present the possible ways for computations of the yarn axes in the 3D space for basic structures, considering or not the bending rigidity of the yarns. Because the introduced coordinate system is not common for the researches and the model requires enough mechanical knowledge it is not known to be implemented or extended in professional system in that form. In later times, when the personal computers became widely available and having 3D libraries like OpenGL, Goktepe and Harlock presented in 2002 one of the principles how to build 3D view of the loops of basic loops [3]. Their paper became one of the most cited and used in that area and until now several researchers apply this principle, presenting the yarn axis as spline to generate a 3D model of the warp knitted structure [4,5]. This way actually seems not to be followed exactly by the implementations of industrial software, because it has several limitations and difficulties. The algorithms implemented into industrial software have more clear rules about the calculations of the key points of the yarn geometry as presented by Kyosev and Renkens [6-8], which allows straight forward calculation of the yarn axes for single and double needle bed structures. This paper presents some considerations about the implementation of the modelling rules for jacquard structures.

Jacquard warp knitting machines have one or more jacquard guide bars, whose guides can stay at its position or can move to one position to the right (Figure 1, left), if a command is given. Earlier solutions used classical mechanics [9] and the modern solution use the Piezo-effect [10]. Such individual motions of the single guides allows creation of complex samples, which are used on curtain machines to create pictures on the structures (Figure 1, right) or on lace machines to produce ground variations. Figure 2: Segment of the fabric(left) and it colour mask (right).

Depending on the number of the yarns between the courses or the number of the jacquard guide bars, respectively, transparent areas can be build (no yarns), dense areas (two underlaps between the courses) or not so dense areas (one underlap between the two courses). These areas can be coded with different colors, as presented on the (Figure 2, right), and converted to coding for the machine. Some researchers reported as well automated system for image recognition and classification of the areas, based on wavelet transformation [11]. The modern industrial CAD for pattern design of such laces are able to represent the simulations of laces very realistic, but this representation is not enough for technical applications, where the properties of the fabrics have to be predicted. In order to solve this task, here an extension of the existing models and software for 3D modeling of warp knitted structures Loop3D [12] is proposed.

Figure 3: The position of normal guides is determined by position P of the guide bar (left); for the jacquard fabrics additionally per each guide the state has to be considered (right).

The jacquard fabrics have additional degree of freedom per each guide. If the guide becomes command 1, it moves to the right side on one position (Figure 3, right). For the 3D representation this all information has to be coded so, that the simulation program receives per each jacquard guide the positions during the knitting process, in the same way as if it would be a single needle on a separated guide bar.

The calculations of the contact and other key points of the yarns for the generation of the 3D geometry of the structure remains unchanged, as described in [7]. Because the model calculates the geometry at each needle independent, the jacquard technic do not require additional changes.

Figure 4 presents one example of application of this method. The ground structure is based on lock-stich (1-0//) and partial weft inserted yarn, which connects the courses after several cycles. The lapping of one jacquard guide is presented in the middle of the Figure 4, and the 3D simulated structure using the Loop 3D software, based on the models, presented in [7] is given on the right hand side Figure 5 presents another example, where the jacquard guide is moved at one of the cycles (here to the left) and its motion differs from the motion of the guide. As a result at one place a small opening is build and the yarns are moved around the opening. The geometrical simulation of this structure is presented on the Figure 6 (left). In order the practical appearance of the opening to be more visible, the structure has to be refined under the consideration of the mechanical interactions between the yarns. This can be done using Finite Element Method or other technique, depending on the required calculation time and accuracy of the results. On the Figure 6 (right) is presented refined structure using the Digital Element Method [14,15], where the resulting structure at the lapping movement from Figure 5 is represented more realistically. Figure 5: The two guides make different step at one cycle (left) which results to local opening. 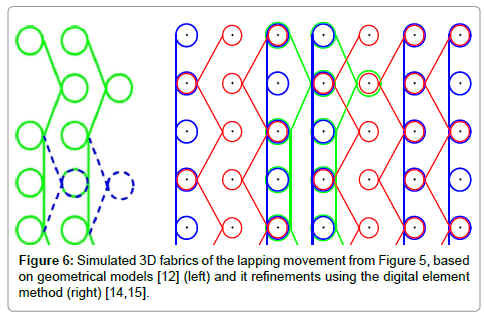 Figure 6: Simulated 3D fabrics of the lapping movement from Figure 5, based on geometrical models [12] (left) and it refinements using the digital element method (right) [14,15].