A young female diagnosed with Thalassemia Intermedia (TI) was referred for severe anemia, marked jaundice, epigastric pain, dyspnoea, fever and edema feet. She was on RBC transfusions and was following up at the thalassemia center. Her laboratory investigations were suggesting AIHA with ongoing hemolysis and complications due to iron overload. From the time of presentation and during her hospital stay, multiple investigations were carried out and complications were dealt with. Surprisingly renal arterial thrombosis was detected which was an unusual feature in intermedia patients. Although patients with TI are considered to be intermediate in severity, multiple complications in them can be fatal. One has to be vigilant in dealing with such cases and should try to understand the pathophysiology of complications. Managing such cases is a challenging task for hematologists. We present here, our case in view of arterial thrombosis as an unusual and unanswered feature in TI patients.

An eighteen years old single female, a resident of interior areas of Maharashtra (Palghar), belonging to the Muslim community and BONCM was referred from peripheral hospital to our emergency medical services (tertiary hospital) with the diagnosis of Thalassemia with severe anemia, jaundice, and sepsis. She had been transferred to us after transfusion with 3 units of PCC and 4 units of FFP. She got admitted to the medicine ward with chief complaints of epigastric pain, high colored urine and yellow discoloration of the skin, fever without chills, bilateral edema feet, generalized weakness and breathlessness on exertion (DOE III) since around a week. There were no complaints of cold, cough, nausea, vomiting, diarrhea, burning micturition or any bleeding manifestations. Her menstrual history was not significant and her LMP was a week before she presented to us.

The patient was diagnosed as Hb-E β Thalassemia Intermedia (TI) during childhood. She required multiple blood transfusions since her age of 4 years. Her blood group was ‘O’ Rh D positive. Later there was difficulty in getting compatible units in the cross-match for transfusions. Her antibody screen was positive on 11 cell panel.3

She was detected to have RBC auto-antibodies (DAT 4+ in 2018, a year back) and was given a short course of oral steroids. She used to get blood units for transfusions from a blood bank and was following up at Thalassemia center. There was no significant past history of Diabetes Mellitus, Hypertension, Bronchial Asthma or Tuberculosis. She used to visit different physicians for her multiple health issues and had consulted a private Haematologist four months back. There she was prescribed Thalidomide (100 mg), Aspirin (75 mg), Deferasirox (1500 mg), Hydroxyurea (500 mg), some wheatgrass (herb) and vitamins supplementations. Her hemoglobin (Hb) levels had improved and transfusion requirements had decreased since then. However, at the time of the presentation, her Hb was still low.

On examination, she was afebrile, had tachycardia. Her general examination revealed pallor, deep icterus and non-pitting edema of bilateral feet. On systemic examination, there was bronchial breathing and crepitations on Right Upper Lobe. The abdomen was soft, nontender. Liver and spleen were palpable. She was conscious, oriented and there were no flaps. Patient was transferred to MICU because of her critical condition. Reference was given to Dermatology in view of c/o red painful and non-pus-filled vesicles on B/L upper and lower limbs, the impression was erythema nodosum.

Table 1: Laboratory investigations of the patient at admission.

A repeat DAT in our hospital laboratory was positive with a grade of 2+ and IAT was negative. Her LDH level was 799 U/L on day nine of admission which rose to 1090 U/L on day eleven. TFTs were normal with T3 78.2 ng/ dL and T4 5.6 μg/mL while there was rise in TSH with a value of 8.7 μIU/mL. Parvovirus infection test showed equivocal positive result for IgM antibody 10:43 and IgG was not done. This was in accordance with the fact that her red cell carried 'P' antigen, checked on 11 cell panel antigram. Also, she carried clinically significant antigens on her red cells evident from her antigram results i.e. Rhesus R1R1 (CDe/CDe), Duffy: Fya+b+, Kell K-k+, Kidd Jka+b+ and was confirmed by molecular analysis.

Few more investigations were advised to the patient like serum haptoglobin, serum Ferritin levels, repeat liver and cardiac MRI scan for iron overload, fibro-scan of liver and thrombophilia profile viz. ds DNA, APLA, protein C and S, AT III and NAT for TTI. However, they were not done by the patient's family due to financial constraints. A diagnosis was made as Hb-E beta-thalassemia with h/o allo/autoimmunization with severe iron overload with resolving LRTI with hepatic failure with renal arterial thrombosis with persistent anemia and hypothyroidism. Patient was started on nasal oxygen, antibiotics, Folate and RBC transfusion. On day thirteen, patient was better and her abdominal pain had resolved. Her anemia persisted to less than 6 gm/dL despite being on transfusion support.

Her icterus had reduced markedly with improvement in her LFTs. However, she complained of dyspnoea so nasal Oxygen was continued to maintain saturation. CT Pulmonary Angiography was normal. In view of thrombosis; tablet Aspirin and injection LMWH were started. On day fifteen of admission in the early morning, she developed frank hematuria (observed in her catheterized urosac bag) and succumbed..

Our young patient with Hb E β Thalassemia had multiple complications like anemia, hepatic failure, hypothyroidism and surprising feature of renal arterial thrombosis. Anemia was attributed to hemolysis of multi-factorial etiology. Underlying hemoglobinopathy due to Hb E β Thalassemia and AIHA as a result of auto and alloimmunization to some extent were the major causes. Acute hemolysis due to Parvovirus B19 infection could have added to the severity of anemia.

Organ dysfunction/failure secondary to severe iron overload due to chronic transfusions, increased gut iron absorption is an important cause of morbidity and mortality. In our patient, hepatic failure could be due to liver dysfunction or due to hepatitis. Although the risk of TTIs like viral hepatitis is high in patients with TDT; our patient was non-reactive by ELISA (3rd generation) for hepatitis viral infections. In view of ANA positivity, a possibility of autoimmune hepatitis could not be ruled out. Her deranged Thyroid profile could have been due to iron overload in thyroid gland or autoimmune hypothyroidism.

Aetiologies for bilateral renal artery segmental thrombosis were thought to be drug-induced (culprit drug could be Thalidomide). Also, sepsis with Thrombotic micro angiopathy or immune-mediated vasculitis was the other proposed mechanism.

A combination of ineffective erythropoiesis, anemia, and hypoxia could be a result of a compensatory increase in serum EPO and decrease in hepcidin, which controls concentration of ferroportin on the intestinal wall. Three proposed regulators of hepcidin production are GDF 15 (released by erythroid precursors), TGF 1 and HIT. The end result is a combined effect of suppression of hepcidin, increased intestinal iron absorption and increased the release of recycled iron from macrophages within RES [1-3].

Increased hemolysis could have led to gall stone in our female patient. Also, certain genetic factors such as UDPG deficiency (Gilbert’s syndrome) needed to be ruled out [4].

Osteoporosis could be secondary to bone marrow expansion. Also, 25-hydroxy vitamin D deficiency is highly prevalent in intermedia patients. Hypothyroidism, hypo/hyperparathyroidism/diabetes, and other endocrine complications can be due to iron overload in these glands [5,6].

Myocardial siderosis is documented in small subgroups of older TI patients at autopsy. Also, exposure to NTBI without accumulation of toxic iron species within myocytes can damage cardiac tissue [7,8].

It is a combined effect of chronic anemia and hypoxia, iron overload, splenectomy in certain patients, hypercoagulability and micro thrombosis in the pulmonary circulation [9-12].

It is found out in a study that 1 mg increase in LIC is independently associated with the risk of thrombosis, PHT, hypothyroidism, hypogonadism, and osteoporosis [13,14]. Patients of TI are at risk of thromboembolic events in the form of thrombosis in the portal vein and central venous system. The mechanism behind it could be chronically activated platelets and enhanced platelet aggregation (expression of CD62 i.e. P-selectin and CD63, both markers of in vivo platelet activation). They have 4-10 times higher metabolites of PGI2 and TX A2 (markers of hemostatic activity) causing thrombotic milieu in peripheral circulation [15,16]. Optimal care; a multicenter study; was conducted over different countries in 584 patients with TI at six comprehensive care centers for the associations between patient and disease characteristics, treatment received and the rate of clinical complications. According to them, venous thromboembolism was the fifth most common complication affecting 14% of their patients and splenectomy alone caused fivefold increased risk of thrombosis. Literature has documented 2% and 29% incidence of venous thromboembolic events in patients with TM and TI respectively [17].

In an Indian case-control study; out of 53 TI patients versus 40 controls, thrombotic episodes were observed in 9.4% patients, attributed to decreased levels of protein C and S and AT III levels and a significant association with hepatic dysfunction [18]. A case report of 10 years old Hb E beta-thalassemia child, showed a strong association of low levels of protein C and S as causative factors for developing hemorrhagic infarcts in brain [19]. The actual risks and causes of the hypercoagulable milieu in intermedia patients are still not clear. A thorough literature review supports four important causes viz; altered platelet function, endothelial activation, red blood cell membrane abnormalities leading to activation of the coagulation cascades and changes in coagulation protein levels (Table 2).

Table 2: Series of different laboratory investigations of the patient during hospital stay (August 2019).

Basic mechanisms for the hypercoagulable state in thalassemia

Partial or complete deficiency of globin chain synthesis as a cause of denaturation and degradation of the remaining globin chains leads to loss of the normal asymmetrical distribution of the RBC membrane phospholipids and translocation of PS to the external membrane leaflet (flip-flop) and membrane damage due to lipid peroxidation mediated by free iron and hemichromes, immunoglobulins and modifications in the membrane band 3 protein and spectrin. The result is an enhanced aggregation of PS-exposing RBCs, their increased adherence to ECs and their capacity to enhance thrombin generation via the assembly of the prothrombinase complex. Enhanced thrombin generation leads to activation of platelets, monocytes, granulocytes and endothelial cells and expression of tissue factor, which further enhances thrombotic process. Low levels of the coagulation inhibitors, protein C and protein S, further facilitate the resultant hypercoagulable state. This phenomenon is well understood and evident with the support of different laboratory assays showing an increase in procoagulant parameters and a decrease in coagulation inhibitors in TI and TM patients [20-22] (Figure 1). 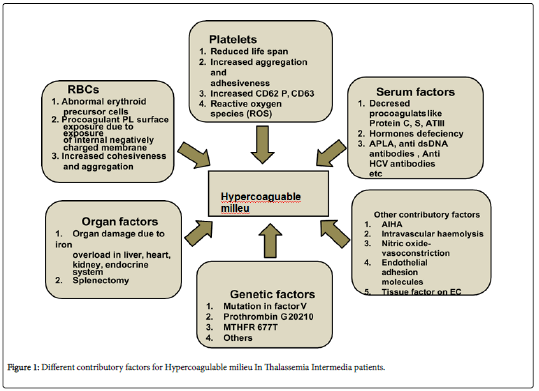 However, to the best of our knowledge, in literature, there is no documented case/s of arterial thromboembolism in TI patients. In our patient, the phenomenon of renal arterial thrombosis and its pathophysiology was still questionable and unanswered. We would have liked to do further tests for the same but we lost patient before that. PM was not done as the family was not willing for the same.

Thromboembolism occurs in patients with thalassemia with considerable morbidity. TI should no longer be regarded as a mild form of thalassemia because patients experience serious manifestations involving almost every organ system. Studies that expand our understanding of the mechanisms and risk factors of the disease, as well as clinical trials evaluating the roles of available treatments, will help establish management guidelines thattransform patient care into optimal standards. It is evident that without treatment, TI patients experience more frequent morbidity and poorer health-related quality of life. General considerations for management include transfusion therapy, iron chelation, splenectomy in selected patients, induction of foetal hemoglobin with drugs like Hydroxycarbamide and other newer agents with the role of anticoagulation prophylaxis in patients. In our patient, certain phenomena remained unanswered i.e. etiology of renal artery thrombosis, the rationale of Aspirin/anti-coagulation, any role of prophylaxis for thrombosis and the role of Hydroxy urea. This case highlights the importance of being alert and vigilant in TI cases which are usually considered as milder form; in doing proposed laboratory investigations and act accordingly for managing such cases.