Background: Lymphomas are a heterogenous group of lymphoproliferative disorders arising from B-cells, T-cells or Natural Killer (NK) cells, which are classified into Hodgkin and Non-Hodgkin Lymphoma. Hodgkin Lymphoma is categorised into Classical Hodgkin Lymphoma (CHL) and Non Classical types according to clinical, histomorphological, phenotypic and genotypic features. In India, the incidence of lymphoma has increased in the last decade and the increased incidence is found in patients of fifth and sixth decade. The etiology of HL remains unclear, usually arises denovo or seen to arise from Epstein-Barr viral infection. Analyzing expression of abundant EBV small nuclear RNA transcripts (EBER) in RS cells by RNA In Situ Hybridisation (RISH) and immunehistochemical expression of latent membrane protein (LMP1)together are more conclusive for identifying EBV-related Hodgkin Lymphomas than either assay alone. Here we studied etiopathogenic role of EBV in HL.

Methods: This was a hospital based ethics approved study conducted at the Department of Pathology, Health Care Global Specialty Hospital, Bangalore from June 2017 to May 2019.

Results: We found among 57 cases of Hodgkin Lymphoma, 33 were EBER positive, 37 were LMP 1 positive, overall, 41 cases (71.9%) were EBV positive. There was statistically significant association between gender and LMP1 (p=0.037). There was a statistically significant association of EBER with morphological subtypes (p=0.034) and Ann Arbor Staging (p=0.013). EBER expression was more frequently found in mixed cellularity subtype and in advanced stages of Hodgkin Lymphoma.

Lymphomas are a heterogenous group of lymphoproliferative disorders arising from B-cells, T-cells or Natural Killer (NK) cells, which are classified into Hodgkin and Non-Hodgkin Lymphoma. In India, 80 to 85% cases are B-cell lymphomas, 15 to 20% cases are T-cell lymphomas and NK cell lymphomas are rare [1]. In India, the incidence of lymphoma has increased in the last decade and the increased incidence is found in patients of fifth and sixth decade.Every year, HL contributes to 1% of all de novo neoplasms that occurs worldwide [2].

The of HL remains unclear, nevertheless careful looking into the unique clinical and epidemiological features, an infectious cause has long been suspected. Usually arises denovo or seen to arise from Epstein-Barr viral infection. Identification of raised antibody titres to EBV antigens in HL patients when compared to other lymphoma patients and previous history of Infectious Mononucleosis in HL patients suggested the first evidence that EBV might have been involved in the pathogenesis of HL [3]. HL is categorised into CHL and Non Classical types according to clinical, histomorphological, phenotypic and genotypic features. Classical Hodgkin Lymphoma (CHL) is the most common type and is sub classified into Mixed cellularity (MC), Nodular Sclerosis (NS), Lymphocyte depleted (LD), Lymphocyte rich variants (LR). MC subtype of CHL is the most commonly associated with Epstein Barr virus. Females are more commonly affected than males.

Epstein Barr Virus is a DNA virus, formally called Human gammaherpesvirus 4, is one of the nine known in the . It is subclassified in to lymphocryptovirus and hence is a most important etiological factor for various lymphoid malignancies such as Hodgkin Lymphoma, Burkitt Lymphoma as well as Infectious mononucleosis, HLH (HaemophagocyticLymphohistiocytosis) syndrome, non- lymphoid malignancies such as nasopharyngeal carcinoma and gastric cancers. Hence our study includes etiopathogenic role of EBV in HL. The oncogenic potential of EBV is mainly attributed to its capability to exist in the latent state within B-lymphocytes [4].These infected B-cells in the germinal center develop into resting memory B-cells along a period of time, allowing the virus to remain in dormant state in B-cells. Occasionally, these re-activate to infect new B-cells [5]. Normally EBV is present in latent form and lytic replication occurs only after reactivation from the latency. During latency, viral DNA resides as an episome inside the nucleus of the host cell and host cell DNA polymerase copies it. During latency, only few of the EBV genes are expressed like EBV nuclear antigen 1 (EBNA1), EBV small nuclear RNA transcripts (EBER) and latent membrane protein (LMP) such as LMP1, LMP2A and LMP 2B and these are usually seen in association with Hodgkin Lymphoma and T-cell NHL. EBV-encoded noncoding RNAs (EBER 1 and EBER 2) are most abundant and transcribed as small noncoding non-polyadenylated RNAs by host RNA Polymerase III [6,7]. Identification of the abundant EBER in HRS cells by RNA In Situ Hybridisation (RISH) provides a sensitive method for detecting latent infection in situ. LMP1 is the only EBV protein with proven oncogenic properties and is strongly expressed by HRS cells. Both the EBER and LMP1 assays together are more conclusive than either assay alone for identifying EBV-related Hodgkin Lymphomas [8]. Immunophenotypically, expression of Epstein Barr Virus (EBV) markers such as Epstein-Barr virus (EBV)-encoded small RNAs (EBER by RISH) and Latent membrane protein 1 (LMP1 by IHC) are associated with advanced stages (Stage III and IV), whereas absence of expression of EBER and LMP 1 are associated with early stages of HL (Stage I and II) [9]. Here, we studied etiopathogenic role of EBV by analysing expression of EBER and LMP-1 markers in Hodgkin Lymphoma.

This was a hospital based study approved by Institutional Ethics Committee, which was carried out at the Department of Pathology, Health Care Global Specialty Hospital, Bangalore from June 2017 to May 2019. The study group comprised of 57 Hodgkin Lymphoma patients presenting to HCG Hospital, Bangalore. Patients included in this study were biopsy-positive Hodgkin Lymphoma cases who were untreated and newly diagnosed. A detailed history including age, gender, clinical presentation, location of tumor, details of clinically assessed lymph nodes, clinical staging, presence of extra nodal sites were noted from patient medical records. Excision biopsies, trucut biopsies and formalin fixed paraffin embedded blocks of all patients diagnosed as HL are processed and multiple sections of 3-4 micron thickness were taken from paraffin embedded tissue blocks. Then thesections are stained with Hematoxylin & Eosin for studying morphology and subtyping and further taken for immunohistochemical analysis of EBER, LMP1 & CD15. Additional immunohistochemical analysis was also done for CD20, CD3, CD15, CD30, PAX5, MUM1, OCT2 marker (data not shown).

Tissues sectioned, mounted on charge slides and dewaxed. Further slides were treated with an antigen retrieval solution [EDTA buffer (1Mm, pH 8)] if required, blocked with a proteinaceous blocking solution (3% BSA) and then incubated with the primary antibody. The bound primary antibody was detected by the addition of secondary antibody conjugated with horseradish peroxidise polymer and DAB substrate. When adequate colour developed, the slides were washed in water to stop the reaction, counterstained with Harris Haematoxylin, and covered with a mounting medium (DPX). Semi-automated method, Intellipathautostainer was used to stain slides.

In RNA in situ hybridization RISH (procedure, tissues sectioned, mounted on charge slides and dewaxed. Further slides were treated with an antigen retrieval solution [EDTA buffer (1Mm, pH 8)] followed by Hydrogen Peroxidase to block endogenous peroxidase enzymes (primary block) and Sniper to reduce the background staining (secondary block). Subsequently, it was treated with RISH zyme for enzyme digestion. EBER probe (digoxigenin labelled probe from BIOCARE) was added and incubated by placing a coverslip. Secondary and tertiary probes were added followed by a DAB substrate. After adequate colour development, slides were washed in water to stop the reaction, counterstained with Harris Haematoxylin, and covered with a mounting medium (DPX). Semi-automated method, Intellipathautostainer was used to stain slides.

EBER & LMP-1 expressions were considered to be considered as positive when >10% of cells shows the nuclear and membrane expression respectively as described previously. 4TheIHCresultsforCD30, CD20 and CD 15 were designated as positive or negative according to the criteria designated by Dinand et al. and Tzankov et al. respectively with a cut off level of ≥10% [10,11]. MUM1 shows predominantly nuclear staining with occasional weak to moderate cytoplasmic staining [12]. CD3 do not highlight any RS cells and it highlights only background reactive T-lymphocytes. OCT2 expression was considered positive when RS cells express nuclear staining [13]. PAX5 expression was considered low as it shows a weak nuclear expression in RS cells compared to strong nuclear expression of background reactive lymphocytes [14].

A total of 57 patients were included in our study and all of the patients’ data in this study were analyzed for various demographical, clinicopathlogical and histological characteristics as mentioned in the Table 1. 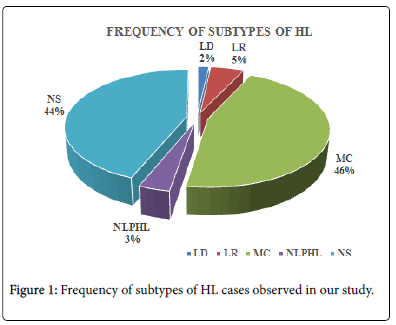 Figure 1: Frequency of subtypes of HL cases observed in our study. Staining pattern of LMP1, EBER, CD20 & OCT2 is shown in Figure 5 and absence of CD3 expression in RS cells (Figure 6). 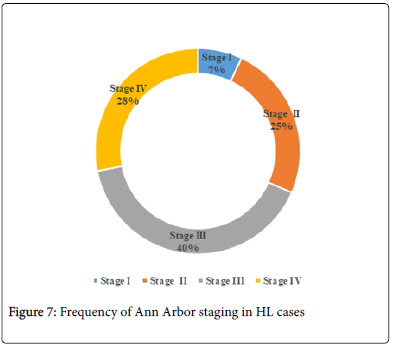 Association of age with EBER, LMP-1 and EBV positivity

Table 2: Distribution of age and EBER, LMP-1 and EBV positivity.

Association of gender with EBER, LMP 1 and EBV

Gender wise comparison was done in EBER, EBV and LMP1 (Table-3). In males, 61.5% has positive in EBER and 50% in females. But the difference was not found to be statistically significant (p=0.412). Similarly by applying chi square test in males, EBV was positive in 71.8% and in females it was 72.2%. Here also the difference was not significant. But in LMP 1, the males had 56.4% positivity and in females it was 83.3%. The difference between the gender in case of LMP1 is found to be statistically significant (p=0.037) (Table 3).

Table 3: Association of gender with EBER, LMP-1 and EBV positivity.

All the 57 cases were histologically sub-typed, phenotyped& then studied for the presence of EBV (LMP 1, EBER and the EBV-combination of LMP1 & EBER) (Table 4). The results showed that 33/57(57.9%) cases are EBER positive and 37/57 cases (64.9%) are LMP-1 positive. Hence, IHC demonstrates EBV in approximately 71.9 % (41/57) of all HL cases (either EBER positive or LMP 1 positive or both), suggesting a role in tumorigenesis and the potential for EBV– targeted therapy.

Association of HL Subtypes with EBER, LMP1 and EBV posivitiy

Table 5: Association of HL subtypes with with EBER, LMP-1 and EBV positivity.

Association of Ann Arbor Staging with EBER, LMP 1 and EBV