Clinical and pathological features of cutaneous melanoma in a Moroccan population: A retrospective study

In our arrangement, melanoma for the most part happens in the acral site, the most continuous subtypes are acro lentiginous and nodular melanoma. The present examination features the deferral in finding of CM in a Moroccan populace, as delineated by the size of the tumors, more prominent Breslow thickness and propelled phase of illness at analysis. Mindfulness about melanoma from doctors and the overall population is an earnest need in our populace to improve both early recognition and treatment of melanoma.

Cutaneous melanoma (CM) is a potentially aggressive and lethal tumor of melanocytic origin. Although it represents only 5% of all skin cancers diagnosed each year, it accounts for approximately 75% of all skin cancer-related deaths [1]. Melanoma incidence is still rising in many regions of the world and touches especially Caucasian population. Although rare in Morocco, cutaneous melanoma represents the most serious skin cancer due to its frequent metastases when the disease is advanced at time of diagnosis.

Several studies have investigated the characteristics of melanoma patients and their prognostic factors. However, records from Maghreb remain scarce. Thus, through this study, we aim to report the epidemiological and clinicopathological features as well as the prognostic factors of patients with cutaneous melanoma collected at Ibn Sina Hospital’s pathology department.

All patients diagnosed with cutaneous melanomas at the department of pathology, Ibn Sina hospital, Rabat, between 2006 and 2018 were included. For each patient, the following clinical data were retrieved from medical records: age at the time of diagnosis, gender, professional activity, skin type (I, II, III, IV, V or VI) according to Fitzpatrick, circumstances of diagnosis, personal and family history of melanoma, non melanoma skin cancer, and other noncutaneous cancers. The delay to diagnosis was recorded as the time between the first observation of the lesion by the patient and the biopsy-proven diagnosis. The characteristics of the primary lesion were reviewed: this contained accurate data about the tumor lesion, as well as lesion type, size in cm (T) and site. In addition, details of the prognostic factors were obtained from histopathology record such as tumor thickness, Clark level, ulceration, mitotic rate, stage, vascular invasion, surgical margins. Immunohistochemistry was also performed.

Permission to conduct this analysis was approved by the ethics committees of both Ibn Sina University Hospital and Faculty of Medicine and Pharmacy of Rabat. Given the retrospective nature of the study, the need for informed consent was exempted from institutional review board.

In between 2006–2018, a total of 27 documented cases of cutaneous malignant melanoma were registered at Ibn Sina Hospital’s pathology department.

The age of the patients at diagnosis ranged from 18 to 80 years (mean 58,7), and case distribution was as follows: 3 patients were under the age of 40; 10 patients were between 41 and 60 years and 14 Patients were over the age of 61. Of the 27 patients included in the study, 18 were women and 9 were men (Figure 1), and both sex were predominantly dark-skinned; almost all of our patients were of Fitzpatrick skin type IV (74%) (Figure 2). 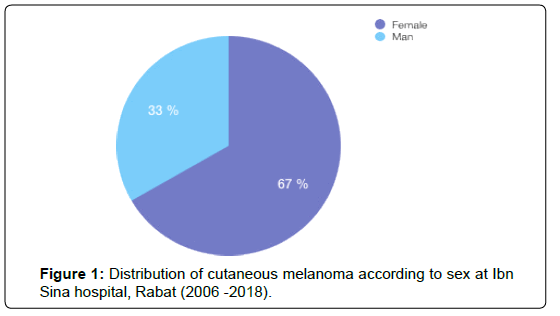 Figure 1: Distribution of cutaneous melanoma according to sex at Ibn Sina hospital, Rabat (2006 -2018). 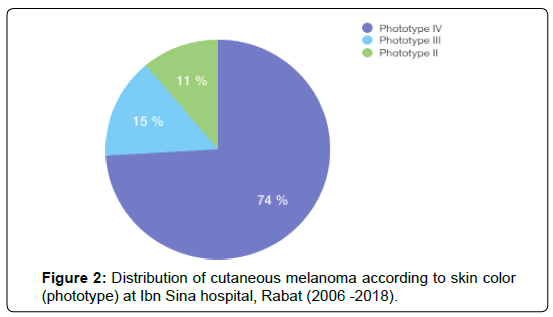 Outdoors jobs were reported by 7 of the patients whereas the remaining 11 conducted activities indoors (Figure 3). 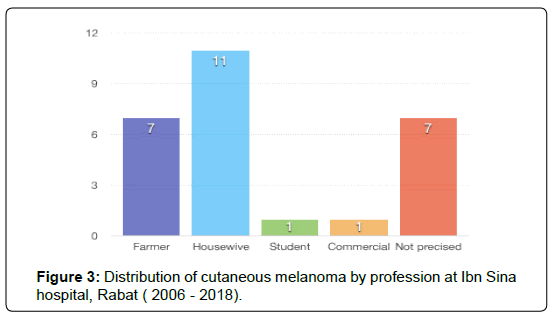 Two (3%) patients had a personal history of melanoma and only one patient had developed non melanoma skin cancers, which was a basal cell carcinoma. Interestingly, among the 16 patients with ALM, 10 related a history of chronic and repetitive trauma to the affected location.

The delay to diagnosis was extremely variable and ranged from 6 months to 4 years (median delay: 16 months). The mean tumor size was 3,9 cm (1-13 cm) with a mean Breslow’s thickness of 4,9 mm (0,9 – 13 mm). The Breslow’s index was significantly thicker in acral and nodular melanoma (> 2 mm), compared with the Breslow’s index of SSM (< 1 mm). The lesion exhibited by 17 patients was described as ulceroinfiltrative, whereas nodular lesions were seen in the remaining 8 patients.

Among different morphological types of melanoma, acral lentiginous variant (59%) was the most common followed by nodular type (26 %) which was reported on the sole of the foot and on the head. 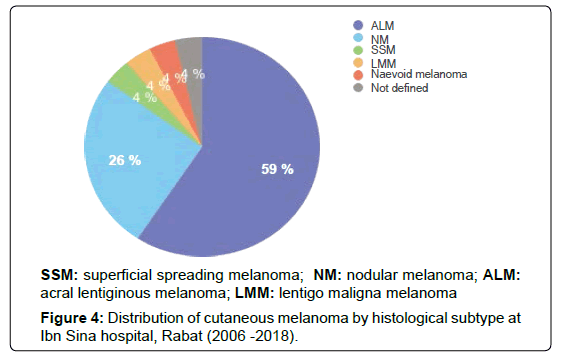 Twelve of the 27 patients (45%) had advanced stage melanoma at diagnosis (stage III to IV) and developed metastases, including lymph node, cutaneous, visceral and bone metastases. ALM was the histological subtype that metastasized the most in our report and seems to be associated with a poor prognosis (Table 2).

Table 2: Correlation between histological subtype and the development of metastases.

Table 3: Distribution of Patients According to Breslow Depth of Invasion at Ibn Sina hospital, Rabat (2006 -2018).

Table 4: Distribution of patients according to Clark level at Ibn Sina hospital, Rabat (2006-2018).

In the examined group of patients, regional lymphatic metastases were found in 11 patients (41%) at the beginning of treatment. Ulceration was found in 13 patients (48%). Regression symptoms were found in only 1 case. There was no vascular invasion. Tumor cell mitotic rate varied from 2 to 9 mitoses per mm2 (average 6 mitoses per mm2). The immunohistochemistry study was performed for all patients and showed focal positive staining for PS100 (80%), HMB45 (70%) and Melan A (70% ). One case showed loss of BAP1 nuclear staining.

Treatment consisted of a wide local excision with 2 cm margins in 25 patients. Lymphadenectomy was realized for 6 patients followed by chemotherapy, whereas 4 patients received a palliative care at the oncology department.

Melanoma is a deadly form of skin cancer derived from melanocytes. The incidence of cutaneous melanoma has been steadily increasing over the last decades. According to the International Agency for Research on Cancer (IARC), NewZeland, Australia, Switzerland and Scandinavian countries registered the highest incidence of melanoma in the world. In Africa, the annual agestandardized rate (ASR) of melanoma incidence is the lowest (less than 4:100,000 cases) [2]. In Morocco, according to the register of cancers, the ASR of melanoma in Casablanca is only 0, 4:100,000 cases (2008-2012) despite abundant exposure to sunlight [3]. Several factors could explain this low incidence of melanoma in Africa compared with other areas of the world. They include lifestyle factors such as the traditional clothing, daily activities and the darker skin colour of most of these populations which provides photo protection due to the increased epidermal melanin [4].

There was a clear predominance of women in our serie, in agreement with the literature [5]. Thus, The average age at onset of cutaneous melanoma was 57–61 years in previously published studies, with a peak incidence during the seventh decade [6-8].

Location analysis with the acral site (45%) as the most frequent location, followed by the head and neck, doesn’t correspond to the literature, in which melanoma is more common among Caucasian men in the trunk, and in the lower limb and hips among Causasian woman [6-8]. The rarity of cutaneous melanoma on the palm seems to be a constant feature of all European reports on melanoma [6-8].

The most common form of melanoma in our study is acral lentiginous melanoma (59%), whereas superficial spreading melanoma is the most common among Caucasians accounting for 41-56% in several European studies, followed by nodular melanoma (14-24%), lentigo malignant melanoma (13-15,9%), ALM (4–10%) [6-8].

ALM is the most common subtype of melanoma among people with darker skin types that typically occur on the palms, the soles of the feet and the nail beds. The atypical and hidden location of these lesions has been reported to delay diagnosis, supporting poor prognosis [9,10]. In our study, among the 15 ALM, 12 cases had a tumor thickness higher than 2, 1 mm. In the analysis of Lino-Silva et al., the 5 year disease-specific survival rate was not statistically different between patients with ALM and those without [11]. The prognostic adverse factors associated with decreased survival for the patients with ALM were male sex, high Breslow thickness, incomplete resection, ulceration and advanced clinical stages (stage III-IV). The pathogenesis of ALM is currently unclear. Trauma has been suggested to be a pathogenic factor; Minagawa et al. demonstrated that there was a relationship between pressure and recurrent trauma in some areas of the sole, and the development of plantar acral melanoma [12]. In our series, it was reported by 10 patients.

Although rare, nevoid malignant melanoma was also reported in this study. It is a distinctive variant of melanoma which is clinically and histologically easily mistaken for banal intradermal nevi or fibromas, and presents as a nonspecific dome-shaped, pink to orange papules or papulonodules. Histopathologically, nevoid melanoma presents with 2 populations of cells: a more conventional looking nevus cells population located at the periphery and a second one with atypical, epithelioid cells with spitzoid characteristics [13]. In our case, histology analysis showed abnormal and deep mitoses, strong HMB45 staining in the dermal component, high Ki67 expression (15%) and a loss of BAP1 function. There were no local or regional metastasis and no family history of cancer. The tumor was excised with negative surgical margins. In the literature, melanoma with loss of BAP1 expression could be associated with a risk of disparate cancers such as choroidal, mesotheliomas, renal carcinomas and meningiomas [14].

Loss of BAP1 was associated with the development of metastasis and poor prognosis in patients with uveal melanoma, but the prognostic significance of BAP1 expression in cutaneous melanomas has not been studied so far, to the best of our knowledge [15]. In the literature, loss of BAP1 by IHC was seen in a small proportion of cutaneous melanoma and was associated with desmoplastic and nevoid melanomas. The prognostic significance of melanomas associated with BAP1 loss is still unclear. However, wide local excision and genetic counseling are required in patients with these lesions [16]. To understand the exact biological behavior of BAP1- negative melanomas, additional studies are warranted.

Many clinicopathological parameters have been reported as significant prognostic factors in melanoma, such as sex, tumour thickness, ulceration, mitotic rate, invasion level (Clark level), microsatellites, vascular invasion, pathological stage, sentinel lymph node positivity, regional lymph node metastasis. In the present study, ulceration is present in 12 cases (48 %), which is not concordant with previously published data (15,3 - 22,2%) [6-8]. This could be explained by the delayed diagnosis in our context. Overall, most cases had a Breslow thickness higher than 2 mm (74%) and a high Clark level ( IV, V) (60%) that explain the advanced stages of melanomas in this report.

In our series, melanoma usually occurs in the acral site, the most frequent subtypes are acro lentiginous and nodular melanoma. The present study highlights the delay in diagnosis of CM in a Moroccan population, as illustrated by the size of the tumours, greater Breslow thickness and advanced stage of disease at diagnosis. Awareness about melanoma from physicians and the general public is an urgent need in our population to improve both early detection and treatment of melanoma.

Ethics Approval and Consent to Participate

This study was approved by the ethics committees of both Ibn Sina University Hospital and Faculty of Medicine and Pharmacy of Rabat. The need for informed consent was exempted from institutional review board due to the nature of the study, which involved a retrospective analysis of routinely collected data.

The data used in this study was extracted from the pathology registry. The pathology department also keeps the blocks and slides for all cases analyzed and are available from the corresponding author upon reasonable request.