Aqueous two phase-systems (ATPS) have been introduced as a new approach to remove dyes from aqueous discharges. Thus, this work evaluated the phase formation capacity in ATPS based on different organic solvents (1,3 dioxolane and 2-propanol) and cholinium-based salts (cholinium bitartrate - [Ch][Bit] and cholinium dihydrogencitrate - [Ch][DHCit]). The capacity in two-phase system form for both used solvents was higher with [Ch][Bit]. The ability to recover actual methylene blue dye was then evaluated for the type of phase-forming composition and equilibrium temperature. For solvents evaluated for their ability to form two phases, those formed with showed greater ability to induce ATPS. The best extraction efficiency (≈ 92 %) was achieved using the ATPS composed of 48 wt% of 1,3 dioxolane + 10.5 wt% of [Ch][Bit] + water at 15 ºC. Thus, it has been shown that ATPS based on organic solvents and cholinium-based ionic liquids have potential for application in dye extraction processes of the textile industry.

Dyes are organic compounds that give colour to materials. They are used in various industries, such as textiles, cosmetics, food, paper and plastic [1,2]. In the past, dyes were usually produced on a small scale from available natural resources, such as insects or plants [3]. However, natural dyes have limited variety and produce muted tones that fade when exposed to sunlight and washing [4]. Because of this, synthetic dyes currently account for the largest share of applications in industries: more than 90% of industrially used dyes are synthetic [5].

Synthetic dye molecules are complex and stable structures due to the presence of auxochromes (water soluble bonding compounds) and chromophores (sets of atoms in a molecule responsible for its colour), so that the colour of the dyed material is fixed more stably [6]. For this reason, they are composed of complex organic substances which gives these dyes resistance to biodegradation [7].

Among the main industrial sectors, the textile industry stands out for contributing more than half of the existing dye effluent worldwide [6]. These wastes are discharged into bodies of water, changing the colourless, clean water to coloured and contaminated water, this because dyes may be toxic to aquatic organisms and humans due they contain metals and aromatic compounds [6,8-11]. An example is methylene blue dye, which is one of the most commonly used substances for dyeing cotton, wood and silk. Although it is not strongly hazardous, it can cause some harmful effects to humans on acute exposure, such as heart rate change, vomiting, cyanosis, jaundice and quadriplegia, and tissue necrosis [12].

Therefore, considering increasingly strict legislations and regulations in worldwide, the associated industries must find the means to treat industrial dye-laden effluents before they are discharged into the environment [13-15]. Consequently, various treatment techniques have been developed to remove synthetic dyes from aqueous solutions [16-19]. However, most treatment methods may present some disadvantages that can make their large-scale application unfeasible, among which generation of hazardous waste, slow degradation rates and high costs stand out [6,20-22].

In this sense, aqueous two-phase systems (ATPS) are an efficient method for extracting compounds in various technological processes. They are liquid–liquid extraction systems consisting of the combination of two different compounds in an aqueous medium which, above certain concentrations, forms two liquid phases coexisting in equilibrium, each phase being enriched with one of the compounds [23-28]. The basis for the solutes partitioning in these systems is a direct result of their selective distribution between the two phases, governed by the affinity of the target molecule for a given phase [29,30]. In recent decades, these systems have been introduced as a promising alternative for the removal of dyes from aqueous matrices due to their properties, because they are environmentally safe, recyclable, economical viable; they also involve short processing times and are scalable for application in industrial processes [20,31-33].

Traditionally ATPS are formed by combinations of aqueous solutions of two hydrophilic polymers or, alternatively, a polymer and an inorganic salt [34,35]. Recently, other species also gained prominence as in the case of ionic liquids [29,30,36]. However, the use of ILs has some limitations regarding their thermal and chemical stability, financial cost, toxicity and biodegradability [37-41]. To overcome these challenges, the search for lower cost, safer toxicologically and environmentally sustainable ILs is still a key issue. For this purpose, cholinium-based ILs have gained prominence for ATPS applications. This class of ILs is derived from quaternary ammonium salts, described as important structures in biological processes and used as precursors for the synthesis of vitamins (vitamin B- thiamine) and enzymes that participate in glycide metabolism [42]. Therefore, this work focuses on developing an alternative and efficient method for the recovery of methylene blue from aqueous matrices using organic solvent-based ATPS and choline-based ionic liquids. The systems were investigated for phase formation capability using 2-propanol or 1,3 dioxolane + cholinium bitartrate ([Ch] [Bit]) or cholinium dihydrogencitrate ([Ch][DHCit]). Experimental conditions such as solvent type, salt, concentration of phase formers and equilibrium temperature were determined for the dye extraction efficiency.

The present study was carried out using cholinium bitartrate ([Ch] [Bit]), cholinium dihydrogencitrate ([Ch][DHCit]), 2-propanol, 1,3 dioxolane and methylene blue dye. All reagents were purchased from Sigma-Aldrich®, with purities higher than 98 wt%. The water used was purified in a Milli-Q (Direct Q® 3UV). The chemical structures of the dye are presented in Figure 1. 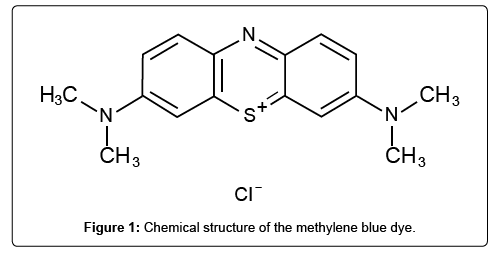 Aqueous solutions at 90 wt% of 1,3 dioxolane and 2-propanol, and cholinium-based ionic liquid solution at 30 wt%, were prepared for the determination of ternary phase diagrams at 25ºC and at atmospheric pressure using the cloud point titration method [43]. The systems compositions were determined by weight quantification of all components added considering an uncertainty of ± 10-5 g. The experimental solubility curves were correlated and evaluated Eq. 1 [44]:

where w1 and w2 are the mass fraction percentages of the solvent and the cholinium-based ionic liquid, respectively. A, B and C are fitting parameters obtained by least squares regression.

Mixing points were chosen based on the biphasic region of the system phase diagrams. In each system, a dye solution was added to have a dye concentration of 25 mg.L-1 for a total system mass of 5.0 g. After thorough homogenization by vigorous shaking, each system was centrifuged at 2500 rpm for 20 min to induce phase separation, and then allowed to stand for 12 h at 25°C to achieve thermodynamic equilibrium. After this step, complete dye partitioning was achieved between the two phases, so the phase interface was defined. Finally, the top and bottom phases were then carefully separated, weighed and then the volumes of both phases determined. Thus, the dye (663 nm) was quantified in both phases, through UV spectroscopy using a HACH DR-5000 spectrometer. The partition coefficients of dye (K) was determined, in accordance with Eq. (2):

where CT and CB are the dye concentrations in the top and bottom phases, respectively.

In order to evaluate the dye extraction efficiencies for top phase (EET, %) and bottom phase (EEB, %) and the volume ratio (Rv) in each ATPS, the following equations were used:

where V is the phase volume, and T and B correspond to the top and bottom phases, respectively.

The thermodynamic functions calculated for the transfer of the dye, namely the molar Gibbs energy

and the molar entropy of transfer

The ability of the differents cholinium compounds to induce ATPS formation in presence of solvents was evaluated. Aqueous solutions of each cholinium-based ionic liquids ([Ch][Bit] or [Ch] [DHCit]) (30 wt%) and of solutions of each solvent (1,3 dioxolane or 2-propanol) (90 wt%) were initially prepared and used for the determination of the binodal curves at 25°C and atmospheric pressure. These binodal curves are shown in Figure 2. 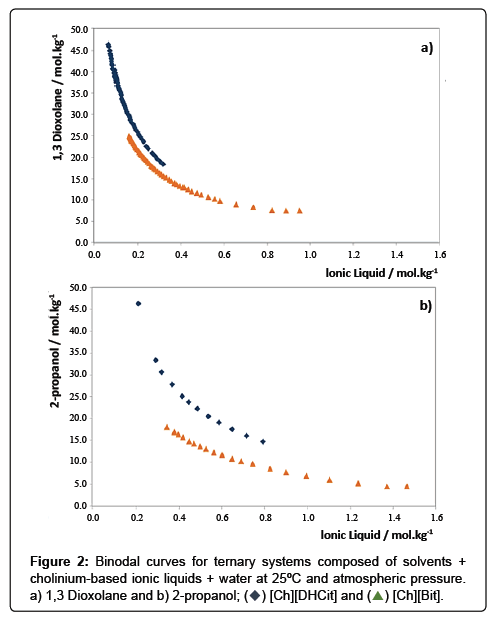 Figure 2: Binodal curves for ternary systems composed of solvents + cholinium-based ionic liquids + water at 25ºC and atmospheric pressure. a) 1,3 Dioxolane and b) 2-propanol;

Through the cloud point titration method, it was possible to observe the ability of the solvents studied to form two phases with both investigated ionic liquid. This is because the high polarity due to the charge of the carboxylate groups in both [Ch][Bit] and [Ch] [DHCit] increases their affinity for water, which induced a salting-out effect on solvents, leading to the formation of the ATPS [45].

Of the ATPS studied, [Ch][Bit] showed the highest ability to induce ATPS as shown in Figure 2. The ability of the cholinium-based ionic liquids to promote the formation of ATPS with 1,3 dioxolane and 2-propanol follows the trend: [Ch][Bit]>[Ch][DHCit]. Considering that these cholinium have the same cation but different anions, the phase-forming ability of these ionic liquids must be determined by the nature of the anions. The ability to induce phase separation of these cholinium-based ionic liquids is determined by the capacity of the anion to form hydration complexes.

The data of the binodal curves in mass fraction units, as well as the respective regression parameters (A, B and C) obtained by applying Eq. 1 [44], standard deviations and correlation coefficients (R2) are provided in Table 1. In the Table 1 shows that good correlations (R2 >0.99) were obtained for the equation used, indicating that this accessory can be used to predict data from a particular phase diagram region where no experimental data are available.

Table 1: The data of the binodal curves in mass fraction units, as well as the respective regression parameters (A, B and C) obtained by applying Eq. 1, with standard deviations and correlation coefficients (R2) for the ATPS composed of solvents (1,3 dioxolane or 2-propanol) + cholinium-based ionic liquids ([Ch][Bit] or [Ch][DHCit]) + water at 25ºC and atmospheric pressure.

The actual ability of ATPS to partition of methylene blue dye was evaluated by analyzing systems composed of different choliniumbased ionic liquids ([Ch][DHCit] or [Ch][Bit]) and 1,3 dioxolane. Mixing points were determined based on the phase diagrams presented in the previous topic (Figure 2). The systems were formed with 63 wt% of 1.3 dioxolane+11 wt% of cholinium-based ionic liquids+solution dye (≈25 mg.L-1) at 25°C and atmospheric pressure. In Figure 3 shows the extraction results for the studied systems. The results showed a higher affinity for the bottom phase of the system (ionic liquid-rich phase), partition coefficient (K)<1. The migration of the methylene blue dye was preferably higher for the [Ch][Bit], due mainly the affinity of the dye for ionic compounds (when compared with the solvent) and more hydrophobic (when compared between the ionic liquids) [46], as a result of an adequate balance of interactions. Thus, for an optimization of the extraction of methylene blue dye, the investigation of the effect of the concentration of the components on its partitioning in ATPS based on [Ch][Bit] was performed (Figure 4). The systems were evaluated at different concentrations of 1,3 dioxolane (48–63 wt%), and as solvent concentration decreased, bottom phase dye extraction increased from ≈ 51% to ≈ 89% (Figure 4 (a)). Subsequently, the effect of ionic liquid concentration on ATPS with fixed concentrations of 48 wt% of 1,3 dioxolane was investigated (Figure 4 (b)). It can be noted that the decrease in [Ch] [Bit] concentration increased the migration of the methylene blue dye to the bottom phase, reaching a maximum extraction of ≈ 90.3% in the ATPS based on 48 wt% of 1,3 dioxolane and 10.5 wt% of [Ch] [Bit]. Values lower than 48 wt% of solvent composition and 10.5 wt% of the ionic liquid concentration are not possible due to the limit of the binodal curve. The influence of temperature on dye extraction was also studied using ATPS composed of 1,3 dioxolane at 48 wt% and [Ch][Bit] at 10.5 wt% (Figure 5). The temperature of equilibrium was changed from 15 to 35ºC. A decrease in temperature slightly favours the migration of dye for the ionic liquid-rich phase until the 15°C, reaching a maximum extraction of ≈92%.

Figure 3: Partition and extraction aspect of the methylene blue dye in ATPS based on 1,3 dioxolane and cholinium-based ionic liquids. a) [Ch][Bit] and b) [Ch][DHCit].

Figure 5: Effect of temperature on partition coefficient (K) of methylene blue dye for the ATPS based on 1,3 dioxolane and [Ch][Bit].

The calculated value for 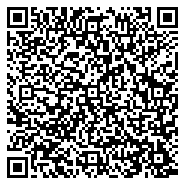