Minimally invasive surgical techniques are an extremely important part of modern day hip replacements. The most significant progress all over the world in the evolution of total hip replacement is that the procedure can be done with less invasive techniques which allow the patient to recover and therefore mobilize early. These techniques require minimum handling to prevent damage to periarticular soft tissues and preservation of bone substance to the maximum extent possible, which helps conserve bone mass and avoid damage to soft tissues, to thus allow faster restoration of hip function.

Considerable mention and citations of this Modified Posterior Approach were appreciated from 1981 till today. Mark Coventry did concur with the concept of this approach in imparting more stability posteriorly postoperatively, as compared to all other posterior approaches to the hip joint described since 1874, which either divide the short external rotators or pass between them which thereby increase the risk of postoperative dislocation of the hip [3].

Hedley et al have devised a modification of the posterior approach to the hip joint in which the short lateral rotators are resutured during closure of the hip joint. However they do not have any experience with this approach [4].

Citation along with appreciation by James Shaw [5], Terry Canale [6] in Campbell’s Operative Orthopaedics, 9th Edition, 1992, Callaghan, Rosenberg and Rubash [7] in The Adult Hip,1998,till Thomas Stahelin et al [8] mentioned in extensive studies on the resuture and reattachment of the short lateral muscles by using markers many years ago and came to the conclusion that nearly 70% of the failures occurred on the first post-operative day itself. Robert H Cofield of Mayo Clinic in Rochester, Minnesota, USA has been using this approach for the last 25 years with no regrets. He is extremely happy using this approach since I presented it during the Scientific Congress of the AseanOrthopaedic Association in Singapore in 1984. Mayo Clinic conducted a study of 68 consecutive cases by the Modified Posterior Approach to the Hip Joint. There were no cases of late instability. Posterior approach to the hip joint through a posterior trochanteric osteotomy is associated with high union rates and a low rate of late instability after hip replacement [9].

I had long drawn out interactions with Dr. John O’Donnell of Australia, who is extremely comfortable saying that I continue to use DAA for my hip replacements, and I have been very happy with it that I cannot imagine changing to any other approach now. I developed an interest in the Direct Anterior Approach to the Hip Joint and have used in initially in Hemiarthroplasty in a few cases with a radical change in my thinking of this Approach, which is helpful to the patient tremendously, as there is no need to osteotomise the greater trochanter and hence avoids any complications related to the union of the greater trochanter, such as non-union or fibrous union, but most importantly prevents dislocation of the Hip Joint which was the main purpose of me devising the Modified Posterior Approach to the Hip Joint, which I had been using till today. Due to these multiple simple advantages offered by this Approach, I would encourage this Direct Anterior Approach to the Hip Joint to the newer generation of Orthopedic Surgeons wherever feasible, though it has a steep learning curve in the initial stages [10]. 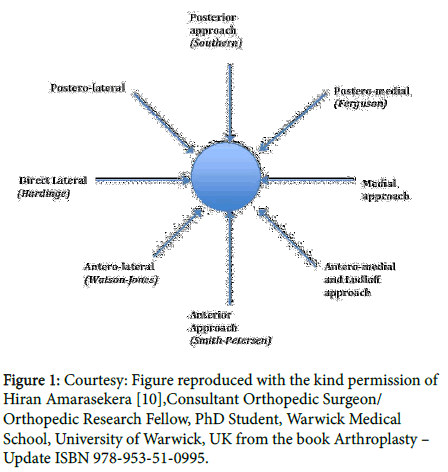 Direct anterior approach (DAA) has become popular in the United states of America for past one decade as “minimally invasive muscle sparing approach” The first description [11] of the direct anterior approach to the hip joint (Figure 2) which provides an excellent exposure to the acetabulum, in primary or a revision total hip arthroplasty, which In contrast with conventional techniques, and hence direct anterior approaches (DAA) has gained popularity among the Orthopedic hip surgeons world over and patients for earlier recovery and mobilization. 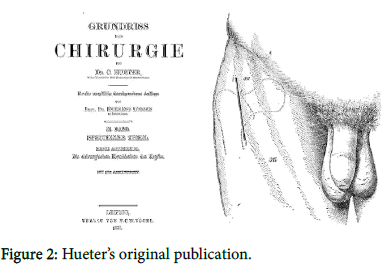 This has progressed to such a point that some patients are able to have their surgery done as an outpatient procedure without any hospital admission, as mentioned in the book. [12]

This is a chapter written wherein the Total Hip can be done as an outpatient procedure without any in-patient admission (Figure 3) on selected patients as a day case, without having any fear of dislocation. 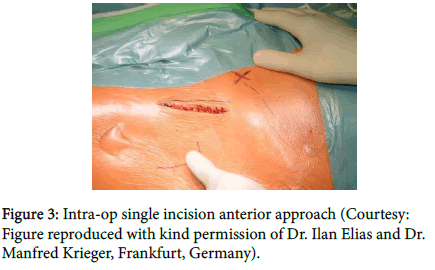 Outpatient total hip replacement (THR) procedures are increasing in the orthopedic surgery community, especially in the USA, Scandinavia, and the Benelux countries. This was presented at the 10th Int. Conference of Arthroplasty in Madrid, Spain on December 04-05, 2017.

Krieger and Elias, were the first authors to report setup and first clinical experiences of ambulatory and very fast track THR in Germany. From June 2016 until August 2017 they have treated 41 patients (22 female/19 male, average age 60 years) who underwent primary total hip replacement surgery at the orthopedic surgery day clinic of the GPR Hospital Russelsheim, Germany with a direct anterior approach and all under general anesthesia. All patients were carefully selected and enrolled in the so called "Hip-in-a-Day" program. Dr. John O’Donnell of Australia uses a fracture Table (Figure 4) for DAA [13]. 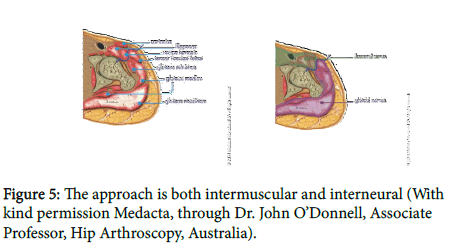 This approach provides a direct visualization of the acetabulum and the anterior iliac spine landmarks to allow reference for appropriate cup positioning as it utilizes anterior internervous and intermuscular plane.

This DAA can be used in

[1]. Outpatient procedure as in certain advanced centres in Frankfurt, Germany.

[2] The Direct Anterior Approach in Hemiarthroplasty.

(2a) DAA is an approach more useful for bipolar hemiarthroplasty for femoral neck fracture in elderly patients than THA in terms of the early acquisition of walking ability due to muscle preservation and the low dislocation rate [14].

(2b) Hip replacement is the most common treatment for displaced femoral neck fractures in the elderly, and minimally invasive surgery is popular in the field of orthopedic surgery. Hemiarthroplasty for hip fractures can be performed safely and effectively via the direct anterior approach with good functional outcome and high patient satisfaction [15]

(4a) Revision THA can be successfully performed through the DA approach. The DA approach does not split muscles, as in other approaches, and studies have demonstrated improved strength, proprioception and healing in the postoperative period .The acetabular exposure can be facilitated by capsular release and correct placement of retractors. Distal and proximal extension of the incision, as well as a femoral extended trochanteric osteotomy (ETO) is helpful to increase femoral exposure [18]

(4b) Revision total hip arthroplasty through the direct anterior approach is technically challenging but offers some advantages in exposure of the acetabulum.