IL 17 Cytokine in Psoriasis: Before and After Methotrexate and NBUVB Phototherapy: A Longitudinal Study

Background: Psoriasis, a disease of abnormal epidermal proliferation, was found to be T helper-1 disease. Currently a new concept of T Helper 17 has been found to play a major role through
IL-17 and IL-22 cytokines in the disease pathogenesis.
Aim: Since IL 17 is one of the key effector cytokine of Th17 pathway, we conducted a 12 week longitudinal study of effect of NBUVB phototherapy and Methotrexate on serum IL 17 levels in patients with psoriasis before and after treatment.
Materials and Methods: This was a prospective longitudinal study done on 28 psoriasis patients with PASI>10 and 10 controls. Serum IL-17 levels and PASI scoring was estimated at baseline and after 12 weeks after therapy with weekly intramuscular injection of 15mg of methotrexate and biweekly NBUVB phototherapy.
Results: Baseline PASI score was 24.23 ± 7.5 which reduced to 9.66 ± 4.2 (P value<0.0001). The serum IL 17 level at baseline was 2.65 ± 0.7 pg/ml. which reduced to 1.99 ± 0.57 pg/ml, P value<0.0001. Serum Interleukin 17 level of the psoriasis patients at baseline was 2.65 ± 0.7 pg/ml compared to 2.5 ± 0.9pg/ml in the controls. The difference is not statistically significant. There was a positive correlation between the serum levels of IL-17 and severity
of PASI score (?=0.95).
Limitation and Conclusion: The levels of IL 17 in the lesions were not measured in this study. So this is recommended in future studies to correlate with the serum levels. In this era of biological, we were able to establish a beneficial role of Methotrexate and NBUVB phototherapy in reducing the key effector cytokine IL-17 in the serum and thus helping in treatment of psoriasis.

Psoriasis which was considered a disease of abnormal epidermal keratinocyte proliferation later was identified as T helper-1 (Th1) disease because increase in Th1 pathway cytokines was observed in the lesions [1] and in serum [2]. Currently a new paradigm has emerged where Th17 cells which produce IL-17 and IL-22, play a central role in the pathogenesis of psoriasis [3]. The differentiation factors (TGFbeta, IL-6, IL-21), the growth and stabilization factor (IL-23), and the intracellular transcription factors (STAT3, RORγt, and RORalpha) are involved in the development of Th17 cells (Figure 1). IL-17A, part of a group of cytokines, called the IL-17 family plays critical role in pathogenesis of psoriasis [4]. IL-17A enhances the expression of S100 proteins, chemokines CCL20, CXCL1, CXCL3, CXCL5, CXCL6, and CXCL8, and VEGF in keratinocytes leading to aberrant cell differentiation, proliferation, and immune activation [5]. IL-17A has pleiotropic effects, but its main effect is recruitment and activation of neutrophils, angiogenesis and tissue remodeling by stimulating the production of angiogenic factors and matrix metalloproteases [6].

Figure 1: Schematic of the key cytokines and transcription factors involved in the differentiation, proliferation, and effector function of Th17 cells versus Th1 cells.

The exact pathomechanisms of conventional antipsoriatic treatment are poorly understood and deserves further investigation. Narrow band UV B NBUVB is an established therapy in psoriasis. NBUVB is absorbed by DNA and uronic acid leading to arrest of actively dividing cells such as T lymphocytes and natural killer cells [7]. They decrease lesional mRNA levels of pro-inflammatory cytokines levels such as INF-áµ, IL-12, IL-8 [8], IL-17, IL-22 and increase counter-inhibitory cytokine IL-4 [9].

Methotrexate has been used as monotherapy or in combination with other agents in the treatment of psoriasis. Combination of methotrexate with NBUVB has an anti-mitotic and anti-proliferative action on infiltrating T lymphocytes. In addition, both possess significant anti-inflammatory properties. Methotrexate leads to reduction in the scaling and infiltration of the lesions, enabling deeper penetration of NBUVB in the dermis with greater effectiveness in depleting the dermal T lymphocytes [10] and faster attainment of marked improvement. Addition of methotrexate significantly reduces the total cumulative dose and number of exposures to NBUVB for achieving marked improvement. This in turn decreases the risk of malignancy associated with NBUVB exposure, if any.

There has been a paucity of studies done on the effect of this combination therapy on serum cytokine levels, and since IL 17 is the key effector cytokine of Th17 pathway, we conducted a 12 week longitudinal study on effect of NBUVB and Methotrexate on serum IL 17 levels in patients with psoriasis before and after treatment. We also compared the serum IL 17 levels between patients and healthy controls and tried to correlate with PASI scores.

This was a prospective longitudinal study done on 28 psoriasis patients with PASI>10 and ten controls, in the Department of Dermatology of a tertiary care Hospital after obtaining approval from the Institutional review Board. Patients who were not on any systemic or phototherapy prior to 6 months of enrollment, were included. Pregnant and lactating women, patients with pustular/ erythrodermic psoriasis, patients with psoriatic arthritis or any other chronic inflammatory disease were excluded.

Baseline investigations like CBC, LFT, RFT chest X ray, ECG and Mantoux test were done. The baseline level of serum IL 17 was measured using an ELISA kit. ELISA for serum IL-17A (Ray Bio Human IL- 17 Elisa Kit) was performed as per standard protocols and manufacturers’ guidelines. The values were recorded at a wavelength of 450 nm and a standard curve was plotted on a linear graph. The values were then calculated from the standard curve. Results were expressed in picogram per milliliter as mean ± standard deviation. Samples and standards were analyzed in duplicates and only variation coefficients <15% were accepted. Then patients were started on weekly intramuscular injection of 15mg of methotrexate and biweekly NBUVB phototherapy for a total period of 12 weeks. The irradiation dose was started at 0.3 J/cm2 and it was increased by 20% on each subsequent visit till just faint erythema appeared. PASI scoring was done at each weekly visit and serum IL 17 cytokine estimation along with the other investigations done at baseline were repeated at the end of 12 weeks.

Mean and standard deviation were used to describe continuous data and number and percentage of categorical data. Paired samples t-test was used to assess significance of the difference between two means of quantitative variables measured twice for the same study group. Spearman’s correlations were used to assess the strength of association between two quantitative variables. The comparison of serum cytokine IL- 17 levels between controls and patients was calculated using the Man Whitney test. P values <0.05 were considered significant. All statistical analyses were performed using Graph Pad Prism software.

Figure 2 (a,b): Clinical photographs before and after treatment. 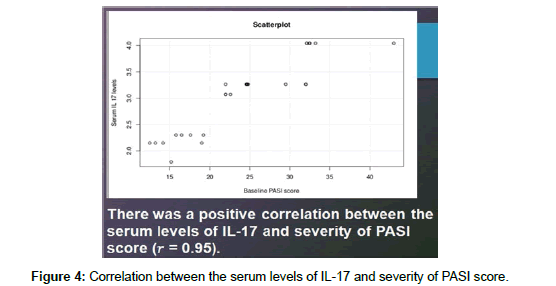 Figure 4: Correlation between the serum levels of IL-17 and severity of PASI score.

Table 1: PASI score and Serum IL17 levels before and after treatment.

Although recent works have shown higher levels of IL-17, IL- 22, and IL-23 in psoriasis lesions [11], there are only few studies regarding these molecules in the serum. IL-17A serum levels have not consistently found to be increased in different cohorts of psoriatic patients possibly due to low levels and sensitivity issues of the detection assays. In our study Serum IL 17 was compared with healthy controls which though was found higher in the psoriasis group, was not statistically significant. Serum IL 17 was found to correlate positively with the PASI score in our study unlike the study done by Priscilla et al. [12] where there was no correlation. Arican et al. [13] found a significant co relation between IL-17 serum levels and PASI score. The clinical benefit from conventional and biologic systemic therapies targeting psoriasis was found to correlate with IL- 17 and IL-23 down regulation in psoriatic patients [14]. The main aim of our study has been the effects of the combination therapy on the serum levels of IL-17. Our data demonstrated a significant reduction of IL-17 serum levels after therapy with both NB-UVB and MTX at the end of 12 weeks.

Racz et al. noted a down modulation of Th17 and a decrease in IL-17 after NBUVB treatment [15]. Coimbra et al. [16] reported that TNF-α, IL-23, IL-22, and IL-17 decreased significantly after both NB-UVB and PUVA treatment with a significant reduction in PASI score and suggested that the reduction in the IL-23/Th17 axis might be important in the pathogenic mechanisms of psoriasis. Narrowband UVB specifically targets IFN-γ-producing Th1 cells as well as upstream cytokines, IL-12 and IL-23 [17]. It also has suppressive effects on additional inflammatory mediators, including IL-18, IL- 8, IL-1b, and IL-6. NBUVB penetrates into the upper epidermis and clears the myeloid dendritic cells and T cells which in turn reduces the inflammatory cytokine production [18]. Studies using flow cytometry have shown that UVB can directly inhibit cytokine production by T cells [19]. With this respect, we also report that NB-UVB was able to suppress T-cell production of IL-17 in the current study.

Elgandhour et al. [20] were the first to assess the effect of MTX on serum levels of IL-17 and IL-23. Methotrexate competes as a substrate for dihydrofolate reductase and inhibits DNA synthesis resulting in an antiproliferative effect. MTX has anti-inflammatory effects through induction of immune cell apoptosis and inhibition of T-cell activation [21]. The mechanism by which MTX reduces IL-17 and IL- 23 is not clear. Both interleukins are produced by several cell types including Th-17, CD8+ T, natural killer T cells and dendritic cells [22]. Reduced levels of these cytokines could be the consequence of an antiproliferative effect of MTX on dermal dendritic cells and varieties of T-cells. Both in vivo and in vitro studies reported that MTX could reduce T-cell numbers in psoriatic skin and in the circulation but had no effect on interferon-γ and IL- 4 production. Methotrexate can suppress inflammation in psoriasis by reducing the numbers of T cells and monocytes in the skin along with reduced expression of adhesion molecules [23].

In 2006, Asawanonda et al. combined methotrexate with NBUVB and compared its efficacy with placebo ⁄NBUVB and showed that the median time to clear psoriasis in the former group was 4 weeks, which was significantly less than that for the latter group. In our study we used the combination therapy and found a significant reduction in PASI score and Serum Il-17 levels.

The dermal T cells that remain after NB-UVB treatment produce less inflammatory cytokines, such as IFN-γ [24]. We therefore recommend the assessment of IL-17 and IL-23 production by lesional T cells in future studies.

To sum up, serum levels of IL-17 decreased after both NBUVB and MTX therapy confirming the importance of this axis in the pathogenesis of psoriasis and providing evidence for a novel therapeutic mechanism of MTX in the disease. In the era of biologicals, methotrexate NBUVB combination offers a cheap and clinically beneficial therapeutic option. Measuring their serum levels using ELISA technique is an easy, rapid, and feasible test for determination of disease activity and therapeutic evaluation. Additional studies would be of value to confirm our finding.