In this work, we introduce Fungifree™, a phytocomplex obtained from a blend of essential oils, endowed with remarkable antifungal activity. Dermatophytoses are mycoses caused by a group of fungi known as dermatophytes. Trichophyton genus accounts for about 70% of all dermatophyte infections and is the largest agent responsible for superficial dermatomycoses. In relation to yeasts, the fungus of the normal skin known as Malassezia furfur is the etiological agent of pityriasis versicolor and Candida albicans were studied.

Dermatophytoses are mycoses caused by a group of fungi known as dermatophytes. Clinically important species distribute in genera: Epidermophyton, Microsporum and Trichophyton [1]. Clinical manifestations resulting from dermatophytosis result from colonization and multiplication of the dermatophytes in the corneous layer of the skin, as well as from the consequent reaction of the hosts (Figures 1 and 2) [2,3]. 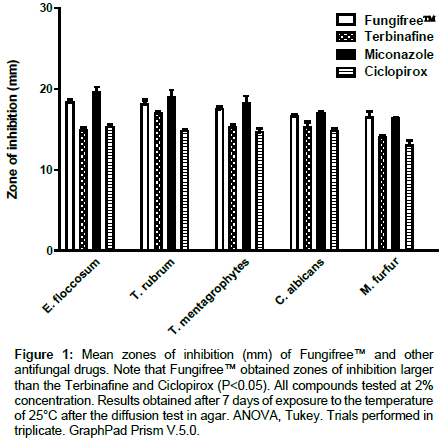 Figure 1: Mean zones of inhibition (mm) of Fungifree™ and other antifungal drugs. Note that Fungifree™ obtained zones of inhibition larger than the Terbinafine and Ciclopirox (P<0.05). All compounds tested at 2% concentration. Results obtained after 7 days of exposure to the temperature of 25°C after the diffusion test in agar. ANOVA, Tukey. Trials performed in triplicate. GraphPad Prism V.5.0. Figure 2: Illustrative figure of the petri dishes exhibiting zone of inhibitions (mm) at the concentration of 2.0% of the evaluated compounds. (Left) colonies of Candida albicans on SDA. (Right) colonies of Malassezia furfur on SDA.

The Trichophyton genus has as its most important species Trichophyton rubrum, T. mentagrophytes, T. tonsurans, T. schoenleinii, T. violaceum and T. verrucosum. Species of this genus are most frequently isolated in clinical material and affect both the glabrous skin and the hair and nails. In this sense, Trichophyton rubrum, a cosmopolitan anthropophilic species, accounts for about 70% of all dermatophyte infections and is the largest agent responsible for superficial dermatomycoses, such as onychomycosis and tinea pedis. Another species, Trichophyton mentagrophytes is the species responsible in humans for the second or third cause of dermatophytosis, causing epidermophages, onychomycosis and lesions on the scalp [2-4].

The genus Epidermopphyton presents a unique species of human doctor, Epidermophyton floccosum, an anthropophilic species par excellence, exclusively pathogenic to the glabrous skin and the nails [4,5].

In relation to yeasts, fungus of the normal skin flora known as Malassezia furfur is the etiological agent of Pityriasis versicolor, a superficial fungal infection characterized by changes in pigmentation of the skin due to colonization of the stratum corneum and also known such as tinea versicolor [6-10].

Another yeast of clinical relevance is Candida albicans, characterized by being opportunistic fungi, which uses the biological imbalance, usually resulting from pathological and immunological factors, which can be through stress and/or other diseases, can occur invasion and multiplication of these fungi in the tissues, generating infections denominated candidiasis [9,11-13].

There are well established drugs for the treatment of mycoses, such as terbinafine and ciclopirox olamine. However, the search for new pharmacological options of natural origin increases every year. In this sense, this work evaluated the antifungal activity of the Fungifree™, a phytocomplex obtained from a blend of essential oils, on yeast and dermatophytes by determining the minimum inhibitory concentration (MIC) and agar diffusion tests against strains yeast Candida albicans and Malassezia furfur, and the dermatophyte strains Epidermophyton floccosum, Trichophyton rubrum and Trichophyton mentagrophytes.

From cultures maintained on Sabouraud Agar Dextrose (SAD) for 7-14 days and at room temperature (28-30°C), the inoculum was prepared and standardized in sterile 0.9% physiological saline solution. Initially, a comparative suspension was prepared with that of barium sulfate from the 0.5 tube of the Mc Farland Scale and cell counting in Neubauer’s chamber. It was adjusted to 90% T (530 nm) in the spectrophotometer, to contain approximately 106 CFU/ mL. The filamentous fungi were prepared after growth of 7-10 days in tubes containing SAD, then the colonies were covered with 5 mL of sterile saline solution 0.9% NaCl. The spores were suspended with ring loop and then transferred to a sterile tube where they remained for 30 minutes. From this suspension, the spores were counted in the Neubauer chamber, in order to obtain a final inoculum with 5 × 103 CFU/mL.

MIC determination was performed on a 96-well “U” bottom culture plate (TPP). Initially all wells of the microplate were filled with 100 μL of Saubouraud Dextrose Broth. Samples of the different antifungals, Terbinafine; Miconazole; Ciclopirox and Fungifree™ were prepared at the concentration of 16%, which were deposited in the first well of the microplate. Then aliquots of 100 μL of the contents of each well were transferred to the next well and after homogenization the next well was transferred. This procedure was repeated to the last well and scrounged after homogenization of the excess dilution, thereby obtaining decreasing concentrations of the antifungal tested and Fungifree™, thereby obtaining the desired concentrations of: 16, 8, 4, 2, 1, 0.5%. Fungal inoculants with a concentration of 1.5 × 106 microorganisms/mL, equivalent to the McFarland density (106 CFU/mL), were diluted 1/10 in sterile saline solution (0.9%) and from this dilution one volume of 100 μL, was deposited in all wells containing the antifungal compounds tested. The microplates were incubated in an oven at 25°C for 7 days. After this incubation period the presence of turbidity in the orifices was interpreted as negative proof of the inhibitory effect of the antifungal and Fungifree™, while the absence of the turbidity was considered positive proof of the inhibitory action of the compounds tested.

In sterile Petri dishes (90 × 15 mm), 1.0 mL of the suspension of each microorganism was deposited in 0.9% sterile saline solution, standardized by tube 1.0 of the McFarland scale and adjusted to 90% transmittance (530 nm), corresponding approximately 300 CFU/mL. Then, 30 mL of melted SDA was added at 50°C. After solidification of the culture medium, wells were made using glass cannulas (6.0 mm diameter). After this procedure, 30 μL of each of the antifungal compounds were inoculated in addition to the test compound, Fungifree™. The assays were incubated at 25°C for a period of 7 days. Positive controls were performed with the antifungal drugs themselves that were challenged by Fungifree™: Terbinafine (2.0%); Miconazole (2.0%); Ciclopirox olamine (2.0%) and Fungifree™ (2.0%). The assays were performed in triplicate and the result was determined by the arithmetic mean of inhibition halos. It would be considered as possessing antifungal activity, that concentration of the antifungals that when applied to the culture medium containing the suspension of the microorganisms presented a halo of inhibition, characterized by a zone of whitening equal or superior to 10 mm of diameter.

The results were presented as mean+SEM (standard error of the mean). The results were submitted to statistical analysis by analysis of variance (ANOVA) of one way, followed by Tukey a posteriori test. Values of P<0.05 were considered significantly different. The analyzes were performed in the program GraphPad Prism version 5.0.

In relation to the sensitivity of the tested strains, it was possible to observe, through the agar diffusion test, that there was a significant difference between the zones of inhibition (P>0.05). In Table I, the means of the results obtained in the biological activity assays of Fungifree™ are indicated. All dermatophytes and yeasts were inhibited by Fungifree™ and control compounds (Terbinafine, Miconazole and Ciclopirox), all at the concentration of 2.0% (Table 2 and Figure 1), which produced several zones of inhibition between 10 and 21 mm in diameter.

Table 2: Mean zones of inhibition (mm) of Fungifree™ on fungal dermatophytes and yeasts.

Through the determination of the MIC, we observed that Fungifree™ presented similar antifungal activity to the drugs evaluated in this study, that is, they all had a mean MIC of 1.0% (Table 1).

In this study, it was possible to observe that Fungifree™ showed a very satisfactory antifungal activity on dermatophytes and yeasts at the tested concentration of 2.0%. We can also conclude that the Fungifree™ MIC is very close to the drugs used as a positive control. Among the drugs used as positive controls. In the face of the antifungal, intrinsic or acquired resistance, that every day becomes a relevant problem in the treatment of mycoses (superficial or systemic), evidencing a sensitive increase in the spectrum of pathogenic fungi and its incidence in clinical practice, Fungifree™ it becomes an excellent choice for the treatment of mycoses.

Safety Analysis of biological and novel treatment for Dermatology