Mosquitoes transmit dreadful diseases, causing millions of deaths every year. The use of synthetic insecticides to control vector mosquitoes has caused physiological resistance and adverse environmental effects in addition to high operational cost. The plant extracts seem to be a better alternative to control mosquitoes due to the presence of many bioactive compounds. In addition, the green synthesized silver nanoparticles have a vital application in biological research. The present study addresses the green synthesized silver nanoparticles (AgNPs) of Coleus aromatics and Wrightia tinctoria leaf extract and their larvicidal and pupicidal activity against Culex quinquefasciatus.

Mosquitoes are important group of insects in terms of public health. Malaria, Filaria, Japanese Encephalitis, Dengue Fever, Heamorragic Fever, Yellow Fever, Chikungunya and Zika fever are the most dreadful diseases transmitted by the mosquitoes that lead to millions of deaths every year [1,2]. C. quinquefasciatus is one such mosquito species that spread disease in an estimated population of 120 million, among these 44 million people have chronic manifestation [3,4]. Repeated use of synthetic insecticides in controlling the mosquitoes have disrupted the natural biological control systems and led to resurgences of mosquito population [5-7]. This has also resulted in the development of resistance, undesirable effects on non-target organisms [8-10]. Bio-pesticides are an alternate for chemical insecticides as it is long lasting, low cost, eco-friendly and harmless to non-target organisms [11,12]. In the present study to enhance the activity of plants derived bioactive compound using modern technique adapted by synthesis of nano-particles using silver, copper, gold and zinc due to their unique physical, chemical and biological properties [13]. In this regard, an attempt was made to find out the differences in the larvicidal properties of green synthesized silver nanoparticles of plants such as Coleus aromatics and Wrightia tinctoria leaves against filarial vector C. quinquefasciatus.

2.0 mM aqueous solution of silver nitrate (AgNO3) used for the synthesis of silver nanoparticles. 10 ml of leaf extract was added to 90 ml of aqueous solution of 2 mM silver nitrate for reduction of Ag+ ions and kept at room temperature for a period 5 hours. As a result, a brown solution is formed which indicates the formation of silver nanoparticles. The sample was centrifuged at 5000 rpm for 20 min and the resulting suspension was redispersed in 10 ml sterile distilled water. Centrifugation and redispersion process was repeated three times. The purified suspension was freeze dried to obtain dried powder. The dried nanoparticles were used for further analysis [15,16].

UV-Vis Spectra Analysis: UV-Vis spectra analysis is an important technique to preview the morphology and stability of nanoparticles. The reduction of pure Ag+ ions was monitored by measuring the UV-Vis spectrum (UV-3024) of the reaction medium after 5 hours diluting a small aliquot of the sample into distilled water.

SEM Analysis of Silver Nanoparticles: Scanning Electron Microscopic (SEM) analysis was done using Vega 3 Tescan SEM machine. Thin film of the sample was made on carbon coated copper grid by just dropping a small amount of the sample, extra solution was removed by using a blotting paper and the film formed on the SEM grid was allowed to dry by keeping under a mercury lamp for 5 min [17].

FTIR analysis was carried out at the central instrumentation facility of St. Joesph’s College, Tiruchirappalli, Tamilnadu. Two milligram of silver nanoparticle was prepared by mixing with 200 mg of spectroscopic grade KBr. FTIR spectra were recorded using a Nicolet 520 P spectrometer with detector at 4000-400 cm-1 resolution and 20 scans per sample [18].

Green synthesized silver nanoparticles were determined by an X-pert pro x-ray diffractometer (Rigaku Ultima III XRD) operated at a voltage of 40 kV and a current of 30 mA with Cu K α radiation in a θ-2θ configuration. The crystallite domain size was calculated from the width of the XRD peaks, assuming that they are free from nonuniform stains, using the Debye Scherrer’s formula.

Where D is the average crystalline domain size perpendicular to the reflecting planes, λ is the X-ray wavelength, β is the full width at half maximum (FWHM), and θ is the diffraction angle [18].

Filarial vector, C. quinquefasciatus egg rafts were collected from stagnant sewage water of Thanjavur. The hatched larvae were cultured and maintained in the laboratory at room temperature (27°C ± 2°C) and 75%–85% relative humidity. The larvae were fed with dog biscuits and yeast powder in the ratio 3:1. Adults emerged from these larvae were reared in mosquito cage and the females were allowed to feed on avian (pigeon) blood and the males were provided with 10% glucose solution socked in cotton. Sample from this parent population was used to confirm the species by The District Entomologist of Malarial Control Program, Thanjavur. Eggs laid by these adults were cultured in a separate container and larvae developed from these eggs were used for bioassay studies [19,20].

Mosquito larvicidal bioassay was carried out according to WHO [21] Standard procedure with slight modification. 200 ml of was it dechlorinated water was taken in a series of 250 ml beakers. The concentration starting 5 ppm to 50 ppm of silver nanoparticles of Coleus aromatics and Wrightia tinctoria were used for the experiment. A control was also maintained separately by adding now the total volume become 202 ml. was it the case with experimental insects also. 10 larvae per concentration were used for all the experiments. The number of dead larvae at the end of 24 h was recorded and the percent corrected mortality was calculated by using Abbott’s formula [22]. The mortality rates of C. quinquefasciatus pupae were estimated in the same manner.

Table 1: The LC50 and LC90 values of Coleus aromaticus and Wrightia tinctoria synthesised silver nano-particle against the II, III, IV instar and pupa of Culex quinquefasciatus after 24 h of exposure.

Table 2: Two way ANOVA to test the validity of relationship in mortality (LC50) as a function of two plants green silver nano-particles and larval and pupa. 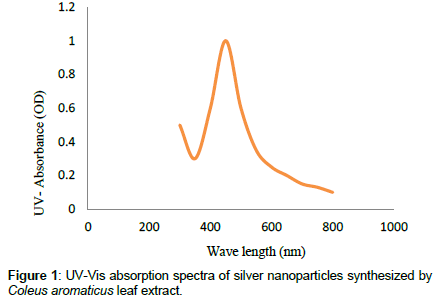 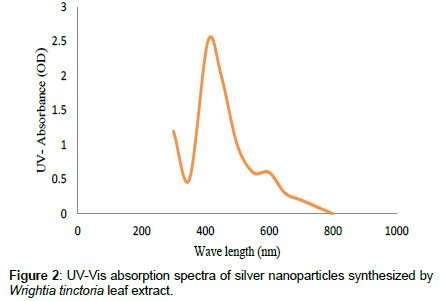 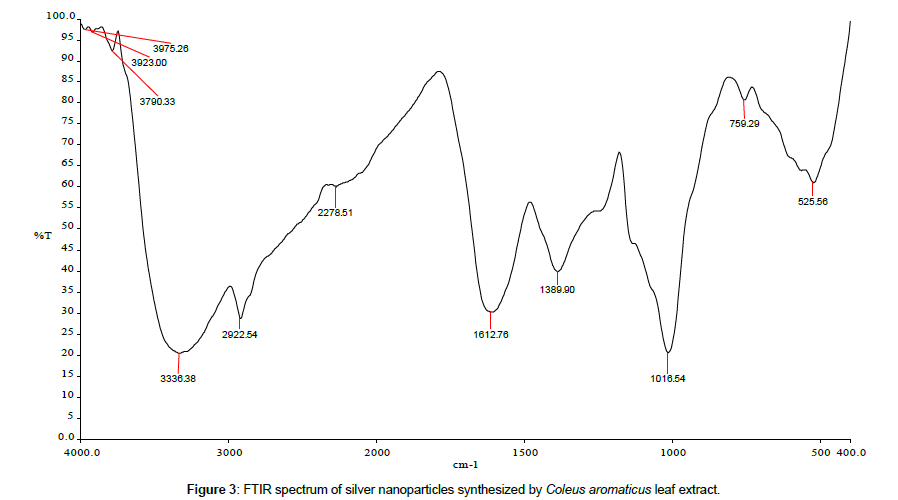 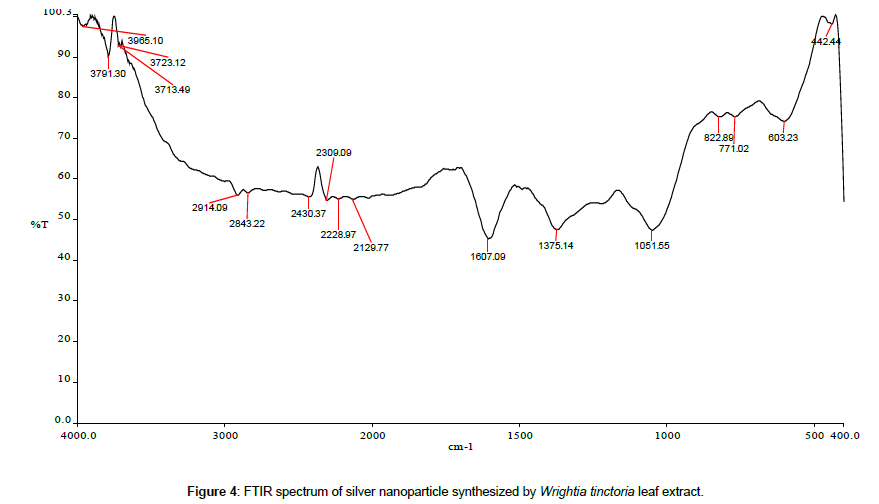 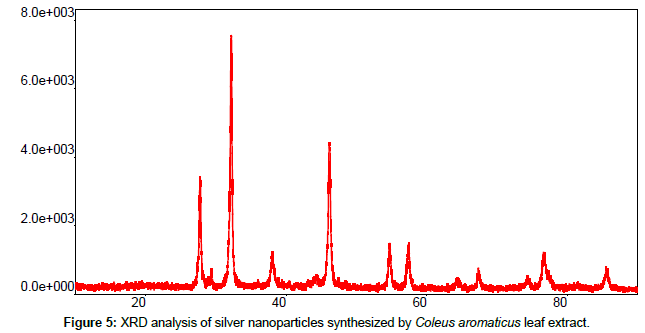 From the present study it is found that II instar of C. quinquefasciatus has more susceptible to green synthesized silver nanoparticles (P<0.05) than other larval stages for two plants. C. aromaticus was more effective than W. tinctoria nano-particles used. A two way analysis of variance was performed to find out the difference among the two plant species and larval stages on mortality and the analysis indicate that there is a significant difference (P<0.05) (Table 2) existing between the larval mortality as a function of larval stages and green synthesized silver nano-particles.

In the present study, we have synthesized green silver nanoparticles using C. aromaticus and W. tinctoria leaf extract. These green synthesized AgNPs were characterized using UV-Vis, XRD, FTIR and SEM and evaluated for their larvicidal activity against C. quinquefasciatus larvae and pupa. Of the two plant extracts used, C. aromaticus has more effective than W. tinctoria. Hence these green synthesized plant extracts has potential to be used as larvicidal agent in mosquito bio-control program.