Thermal comfort properties such as air permeability, water vapor permeability and thermal resistance of a hydrophobic thermoplastic polyurethane (TPU) and a hydrophilic poly (vinyl alcohol) (PVA) electrospun nanofiber mats were evaluated in this study. Polycarboxylic acid; 1,2,3,4 butanetetracarboxylic acid (BTCA)was selected as cross-linking agent for PVA nanofibers. The aim of this study is to examine thermal comfort properties of both a hydrophobic and a hydrophilic nanofiber mat. The results revealed that air permeability of nanofibrous membranes was considerably low which provides a barrier effect. On the other hand, despite low air permeability, these materials showed superior water vapor permeability characteristic, which will sustain breathability of the skin.

Recently, nanofibers nonwoven membranes produced by an electrospinning process have been shown great potential as a dressing materials for wound healing [1-5] and as barrier material for protective clothing [6-8].

Electrospun nanofiber membranes are known with their porous character especially high interconnected porosity [6], which is particularly important for exuding fluid from the wound [9]. Besides, nano or micro-pores of the electrospun mats are presented as providing good moisture and vapor transport properties, while it maintains liquid resistance for protective clothing [8,10]. The inherent small pores and very high specific surface area enable the nanofiber membranes to inhibit the invasion of exogenous microorganisms and to assist the control of fluid drainage [1,9]. In addition, the unique electrospinning process makes it easy to impregnate the nanofiber membranes with antibacterial, therapeutic agents for wound healing as well as sensing agents for protective clothing applications.

Wound healing performance is mainly influenced by the porosity, air permeability and surface wettability of the nanofiber membranes. A nanofiber membrane having with good hydrophilicity and high porosity considerably facilitates the healing of wound especially at the early healing stage. As pores in nanofiber membranes are typically smaller than that of conventional cotton gauze, the nanofiber membrane should be able to decontaminate and prevent exogenous infections via sieve effect [9]. Barrier performance is also evaluated with air permeability and moisture vapor transport properties [7,8,11,12]. A combination of both high barrier performance and thermal comfort is essential for an effective protective clothing system [8]. Thermal comfort is also needed for wound dressing since it is mostly used in contact with skin [13].

Therefore in the present study, thermal comfort properties such as air permeability, water vapor permeability and thermal resistance of a hydrophobic thermoplastic polyurethane (TPU) and a hydrophilic poly(vinyl alcohol) (PVA) nanofiber mats were evaluated. Polycarboxylic acid; 1,2,3,4 butanetetracarboxylic acid (BTCA) was selected as cross-linking agent for PVA nanofibers. The aim of this study is to examine the effect of mat thickness on thermal comfort properties of both a hydrophobic and a hydrophilic nanofiber mat.

Homogeneous TPU solutions were prepared by dissolving 10% (w/w) of TPU plastic granulates in DMF. A weighed amount of PVA was dissolved in distilled water at 100°C to prepare an aqueous PVA stock solution at a fixed concentration of 10% w/w. BTCA as crosslinking agent, was selected to be 10% (w/wpolymer) and were directly added into the spinning solution with sodium hypophosphite monohydrate as catalyst in ratio of 2:1 (w/w) followed by stirring for 10-15 min.

After electrospinning, PVA nanofiber mats were heat set at 130°C for 20 min in an oven to enhance the crosslinking reaction. Three collection period of 1, 3 and 5h were used for producing different mat thicknesses and produced nanofibrous membranes were coded as TPU/1h, TPU/31h, TPU/5h, PVA/1h, PVA/3h and PVA/5h according to collection period.

The surface morphology of electrospun TPU and PVA nanofibers were characterized by using scanning electron microscopy (SEM, FEI Quanta 250FEG). Each sample was coated with a thin film of gold using an EMITECH K550X ion sputtering device. The acceleration voltage was 2 kV and the magnification was ×10000. By using Image J software, fiber diameters are measured. Approximately 50 measurements were carried out from the different parts of each sample.

Air and water vapor permeability of electrospun nanofibers were tested by Textest FX3300 in accordance with EN ISO 9237 (5 cm2 surface area and 200 Pa pressure drop) and by SDL-Atlas M261 in accordance with BS 7209, respectively. Fabric thickness and thermal properties of the samples were measured by Alambeta Instrument (Sensora).

The surface morphology of electrospun TPU and PVAnanofibers were investigated by SEM imaging. Figure 1 shows the representative SEM images. They were given according to their collection time. Differences in fiber diameters, air permeability, water vapor permeability, thermal resistance and thickness measurements were analyzed by one-way analysis of variance (ANOVA) followed by a Duncan test for pairwise comparison. A significant difference was determined between the mean fiber diameters of TPU and PVA nanofibers and PVA nanofibers were finer than TPU nanofibers. However collection period had no significant effect as expected. 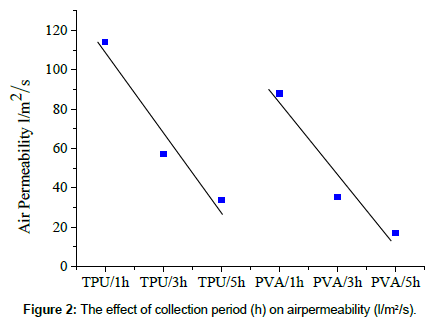 Figure 2: The effect of collection period (h) on airpermeability (l/m2/s).

These results showed that the relation between electrospinning collection period and air permeability is not linear but equivalent as follows [6]:

These results revealed that air permeability of nanofibrous membranes was considerably low which can provide a barrier effect.

In case of mat thicknesses PVA/1h, PVA/3h and TPU/1h were found in same subset and lower than TPU/3h and PVA/3h. TPU/5h was statistically higher than all other 5 groups, which leads to similar results in thermal resistance [14].

In case of water vapor permeability, collection period or polymer type did not have a significant effect, all PVA and TPU nanofiber mats showed similar results and they were not statistically different from each other (p < .001). Nanofibrous mats gave very high water vapor transmission like base fabric (664.83 g/m2/day). Fine pores allowed water vapour transmission in all cases (Figure 3). According to this result, electrospun PVA and TPU nanofibrous mats can be considered to have high water vapor transmission. Water vapor transport properties of electrospun nanofibrous mats are excellent and indicate that layers based on electrospunfiber technology will be thin, lightweight, and very ‘‘breathable’’ with respect to allowing cooling to take place through the protective clothing system [7,14] or wound healing treatments [15]. 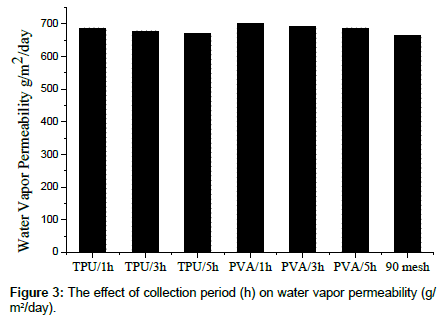 Dressings that produce a moist wound environment and thereby promote cell migration and hence wound healing have long been recognized as desirable. To attain the satisfactory conditions at the wound site the dressing should possess a suitable water vapour transmission. Besides, barrier effectiveness and thermal comfort are two most important factors to be considered in the selection of materials for protective clothing. The aim of this study is to examine the thermal comfort properties of both a hydrophobic and a hydrophilic nanofibre mat. The results revealed that air permeability of nanofibrous membranes was considerably low which provides a barrier effect. On the other hand, despite low air permeability, these materials showed superior water vapor permeability characteristic, which will sustain breathability of the skin.

The authors acknowledge to Scientific Research Projects of Pamukkale University (2017KRM002) for support given.