Is Living Altitude a Determinant of Ski-Mountaineering Performance? An Analysis from the Patrouille Des Glaciers

Analyses of parameters of habitat such as altitude and their effects on performance are scant. Therefore, the aim of the present study was to investigate the relevance of altitude of the habitual place of abode for course times of alpinists in one of the largest backcountry skiing races in the Swiss West Alps: “Patrouille des Glaciers” (PDG) from Zermatt and Arolla to Verbier. Therefore course times and altitudes of the habitual place of abode of 1569 male and 240 female alpinists participating in the PDG in the years 2004, 2006, 2008, 2010, 2014 were analyzed. Results revealed that an increase in elevation of about 1000 m (e.g. from 500 to 1500 m above sea level) lead to a decrease in course time of around 80 minutes. Findings can be explained by the effects of reduced oxygen partial pressure at higher altitudes, respectively hypoxia, through induction of several physiological changes in the alpinists’ bodies. Alpinists primarily living at higher altitude are therefore better acclimatized and thus prepared for the race; hence adequate acclimatization is paramount not only for improving course time but also for staying safe whilst participating in the PDG.

Backcountry skiing has gained increased attention and developed from a niche sport mainly practiced in spring to a regular Alpine discipline over the whole season. It is estimated that in the Alps the number of tourists visiting altitudes above 2000 m has increased to over 40 million per year, whereby a substantial share are backcountry skiers [1,2]. Besides this development as a recreational sport backcountry skiing has also developed into a competitive discipline. In Switzerland ski mountaineering races have become more and more popular with e.g. the Tris Rotondo in the Gotthard Region, the Davos Race in eastern Switzerland and especially the Patrouille des Glaciers (PDG) in the West Alps. Originally, the PDG was only performed by Swiss military patrols protecting borders and ski touring in order to keep in good shape [3]. From these original military races the nowadays prestigious races of the Mezzalama in Italy, the Pierra Menta in France and the PDG in Switzerland arose [3]. Focusing on the physiological requirements of the PDG, particularly ski mountaineering, the event can be regarded as a long-lasting endurance performance with extensive use of cardiopulmonary and musculoskeletal systems, both concentric and eccentric [4-11]. Ski mountaineering may be another discipline where athletes from a specific origin might dominate since this sport can only be carried out in regions with snow and cold temperatures e.g. in central Europe in higher altitudes only [12-14]. It is generally known that athletes from certain countries dominate certain disciplines [15,16]. For example, runners from East Africa (i.e. Kenia and Ethiopia) are the fastest in track and road running up to the marathon distance [16-18].

Focusing back on the PDG, one of the main determining factors characterizing the race is the high altitude: from the start in Zermatt at 1609 m above sea level, to Tête Blanche at 3650 m, to Col du Bertol at 3279 m and Arolla to Rosablanche at 3150 m and to the finish in Verbier at 1522 m above sea level. The whole race takes place at altitudes higher than 1500 m, emphasising the increased physical demands on the alpinists due to the reduced partial pressure of oxygen at these levels of elevation [16,19,20]. The aim of this study was to analyze the association of altitude of the habitual place of abode of alpinists participating in the PDG, the most popular ski mountaineering race in Switzerland. Our key questions were whether and how living at high altitude influenced course time and what kind of recommendations can be made for participants. We tested the hypothesis that there is no effect of altitude of the habitual place of abode on course time [21].

All data were obtained from the official PDG website (www.pdg.ch). Online results from the original race for the years 2004 to 2014 were analysed. In 2012 the race was aborted due to changes in weather (avalanche danger) and results from this year were therefore not included in the analysis. The original route (from start in Zermatt - to Schönbiel - Tete Blanche - Col de Bertol - Plans Bertol - Arolla - Col de Riedmatten - La Barma - Rosablanche - Col de la Chaux - Les Runettes – to finish in Verbier) comprised a total ascent of 3994 m and a total descent of 4090 m as well as a total distance of 53 km, yielding around 100 performance km (i.e. 100 m ascent equivalent to 1 km horizontal distance) [22].

Participants entered the race as small teams called ‘patrols’, consisting of three members each. For each patrol the mean altitude of the habitual place of abode (meters above sea level) of its three members was calculated and paired with their respective course time (minutes). This yielded a data set for regression analysis (see below). Due to increased numbers in the years 2006, 2008, 2010 and 2014 participants were divided into two starting fields, amounting to nine starting fields in total. Due to the fact that patrols had to arrive together, only the first ten patrols were analysed assuming that in these patrols all alpinists had somehow a similar performance level. For each of the nine starting fields the first ten patrols of each category were analysed, yielding 70 patrols per field and a theoretical total of 1890 analyzed alpinists across all starting fields. However, in some categories less than ten patrols reached the finish in Verbier (e.g. in the oldest age groups) thus reducing the actual number of analysed participants to 1569 male and 240 female alpinists.

Mean altitude of the habitual place of abode (meters above sea level) of the members of each patrol was calculated (home address of each alpinist was available) and paired with their respective course time (minutes). For each pair a Poisson regression as well as a linear regression was calculated [23]. Furthermore, correlative relationships and significance test between course times and altitudes of habitual abode were calculated with Pearson correlative coefficient. Calculations were made with Graphpad Prism (GraphPad Software, Inc., La Jolla, California, USA) and Microsoft Excel (Microsoft Inc., Redmond, Washington, USA).

Figure 1 shows the linear relationship between elevation above sea level of habitual place of abode (y-axis) and course time (x-axis). It is apparent that the higher the altitude of the habitual place of abode the faster the PDG is completed. From the regression equation it was estimated that a difference in elevation above sea level of e.g. 1000 m would lead to a decrease in course time of around 80 minutes, however this statement is only made based on the detected association. To check for validity, the regression line in Figure 1 was further calculated excluding the 3 conspicuous outliers (1329;659/1133;409/625;2148). However, these 3 outliers do not seem to harm analyses too much (all data: Y=-0,2993x + 987,68, R2=0,0143 versus conspicuous deleted: Y=-0,31x+992, R2=0.0147) The additionally conducted Poisson regression yielded a somehow higher but still small coefficient of determination (R2=0.0147). Furthermore, overall correlative relationships (n=603) (calculated with Pearson correlative coefficient) between altitude of the habitual place of abode and course time was -0.13 (p < 0.01). 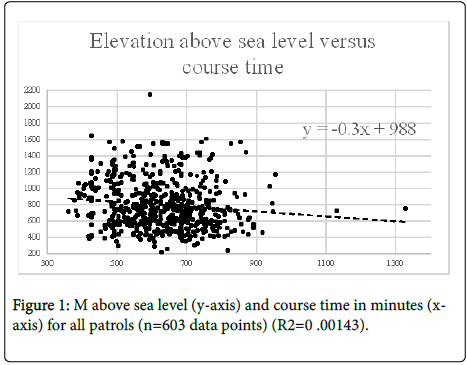 The aim of this study was to analyze the relationship of altitude on course time for the most popular ski mountaineering race in the Swiss Alps-Patrouille des Glaciers (PDG). It was shown that the higher the altitude of the habitual place of abode the faster the PDG was completed. In principle, the postulated hypothesis can therefore be rejected. However, to infer causality from a correlation is not possible and it has to be taxed only as an association. Furthermore, the coefficient of determination underlying this detected variance is small and need to be considered carefully. Confounding factors have to be kept in mind such as training and the frequency of training in the sport of ski-mountaineering. Patrol members who live at altitude are more likely to train more, and train more doing ski-mountaineering than city dwellers. Nevertheless, it is generally accepted that altitude affects health and consequently performance [24]. Individuals living at moderate altitudes (up to about 2000 m above sea level) were shown to have lower mortality from coronary artery disease and stroke (22% and 12% less, respectively, per 1000 m) [25] and an about 50% lower risk of dying from Alzheimer's disease compared to their counterparts living at lower altitudes [24]. These effects were partly attributed to climatic conditions such as ultraviolet radiation from sunlight having a substantial impact on cardiovascular diseases [25]. With every 300 m increase in altitude ultraviolet levels increase by up to 10% [3] and in Switzerland ultraviolet radiation is substantially stronger at higher than at lower altitudes [26,27]. The protective effect of ultraviolet radiation may be mediated by higher f vitamin D in the body [28-34] or by lower blood pressure [17]. Vitamin D synthesis is therefore stimulated at high altitudes [13] and even the irradiation of relatively small skin areas is sufficient to influence vitamin D synthesis [25,33]. Living at higher altitudes may therefore provide advantages, particularly in winter when vitamin D synthesis is critical at lower altitudes because of the relative lack of sunshine [25]. Furthermore, in Switzerland air pollution diminishes with increasing altitude, which is reflected by better lung function [25,35]. Differences in eating habits in the Alps (people there consume more milk (or milk products) entailing more Omega 3-fatty acids) might further contribute to differences in mortality from these diseases [25,36]. To sum up, clear differences exist in cardiovascular diseases probably due to climate, diet, or both in persons living at higher altitudes [25]. Interestingly, further aspects can be mentioned e.g. hearts of natives of the Andes mountains were found to be larger than those of height- and weight-matched lowlanders [37].

But can this fully explain the observed effect that increased altitudes of the habitual place of abode correlate with reduced course times and thus increased performance? In this context, the important aspect of acclimatization has to be mentioned. Oxygen partial pressure is reduced at higher altitudes increasing the physical demands on the alpinists [19,20]. Although, many patrols prepare before the race in the Alps and at higher altitudes some participants do not have the time for adequate acclimatization thus substantially reducing performance capacity [6,9,10]. Hypoxic conditions improve endurance capacity, e.g. in skeletal muscle, through induction of genes of the glycolytic metabolism, of capillary growth factor VEGF and myoglobin as well as an increase of density of capillaries and mitochondria and induction of HIF-1 System [6,9,10]. Participants primarily living at increased altitudes therefore are better acclimatized and thus better prepared for this race, which always takes place above 1500 m (relative to sea level), due to prior physiological adaptions [6,9,10]. However, keeping in mind the whole body and all its systems from cardio-pulmonary system to skeletal muscle and mitochondria effects are more ambiguous. For example, if highlanders are confronted with normoxia, VO2max increase is smaller compared to the loss of lowlanders confronted with hypoxia [6,9,10,38]. Due to a lower oxidative capacity respectively, a lower density of mitochondria in skeletal muscle highlanders are not able to use the increased oxygen supply, which is possible for lowlanders with higher oxidative capacity [6,9,10,38]. Furthermore, muscle performance capacity is reduced when living in very high altitudes (more than 5000 Meter) [6,9,10,20]. To sum up, the detected relationship between altitude of the habitual place of abode and course time is small but apparent. This highlights the importance of being well acclimatized for the race in order to achieve optimal results and to stay safe whilst participating in the PDG.

Altitude of habitual place of abode seemed to have effect on course times in the Patrouille des Glaciers (PDG) from Zermatt and Arolla to Verbier.

Increase in altitude of habitual abode of about 1000 m of (e.g. 500 versus 1500 m) lead to hypothetical faster course times of about 80 minutes.

Acclimatization prior to the PDG therefore highly recommended in order to achieve optimal results.

Acknowledgements and Conflict of Interest

Special thanks go to Hans-Martin Henny for his constant and constructive thinking through the development process. There is no conflict of interest. Study was conducted by BG without special financial support.