Localized Amyloidosis of the Nasopharnx, a Role for Modern Radiotherapy, a Case Report and Literature Review

Amyloidosis is a rare condition. Focal deposition of amyloid has been known to occur in many tissues of the body. In this report, we present a report of localized amyloidosis presenting within the nasopharynx. Treatment utilized included a combination of initial surgical resection followed by salvage radiotherapy at recurrence. Utilization of modern radiotherapy technique intensity modulated radiation therapy (IMRT) was performed. A review of the literature is performed and presented for discussion.

Amyloidosis is a condition characterized by deposition of amyloid, a fibrillary substance consisting of low-molecular weight proteins [1]. It can present as localized disease, implying its restriction to any solitary organ in the body, or as a systemic disorder [1]. Localization of the disease in the nasopharynx is very rare, and therefore the optimal management is unknown [2]. Given the difficulty of surgical access and gross total resection (GTR) in the nasopharynx, treatment with surgery alone has been known to result in recurrence [3,4] Studies have examined the use of single and multi-modality therapy for focal amyloidosis including surgery, systemic therapy, and radiotherapy [4]. In this report, we present a case of focal amyloidosis recurrence within the nasopharynx treated with salvage radiotherapy.

A 55 year old male presented with epistaxis for several months. Computed tomography (CT) scans of the head and neck showed a right lateralized nasopharyngeal mass. Evaluation by an ear-nosethroat (ENT) physician confirmed an abnormal mass in the right nasopharynx, and biopsy showed the mass consistent with amyloid. Sub-total resection (STR) was performed and pathology confirmed amyloid deposition without further findings. Follow-up CT scans 6 months after resection confirmed recurrence and progression of the mass. He was then referred to consider radiotherapy.

A positron emission tomography (PET)/CT scan was performed initially to aid in tumor localization; this is illustrated in (Figure 1). The patient was simulated supine and immobilization was performed utilizing a thermoplastic mask. A clinical tumor volume (CTV) was contoured in the treatment planning system, and this volume was expanded 5 mm circumferentially to generate the planning target volume (PTV) as illustrated in (Figure 2). Treatment was performed utilizing intensity modulated radiation therapy (IMRT). Dose prescription was 200 cGy per fraction times 10 fractions, for a total dose of 20 Gy. Treatment plan with dose coverage is shown in (Figure 3). Treatment was delivered as planned, and no acute or late toxicities were reported. Follow-up from date of treatment was 18 months. No recurrence of disease has been found (Figure 4). 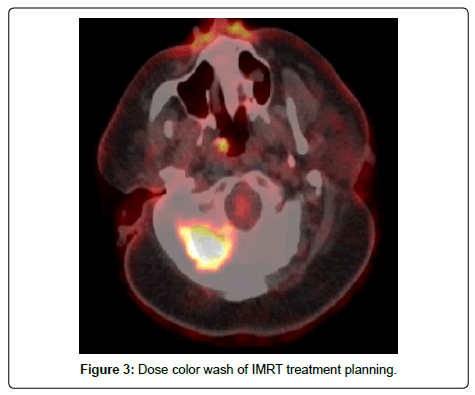 Primary localized amyloidosis is an uncommon condition [4]. It is possible for amyloid deposition to occur in any tissue of the body [1]. GTR for lesions surgically accessible is the most common treatment when applicable [3,4].The use of adjuvant or definitive radiation therapy is also known to be of clinical benefit, with varying doses reported in the literature [2,5,6].

Amyloidosis in the nasopharynx presents a surgical challenge in the ability to achieve a gross total resection [2-4]. The use of surgery with adjuvant radiation has been documented before in the Nasopharnx [2]. The use of salvage radiotherapy for amyloidosis in other organs is also documented, both with favorable outcomes [7]. The most common location of localized amyloidosis managed with definitive radiotherapy is the trachea, with doses of 20-24 Gy delivered in 10-12 fractions with minimal recurrences [5,6,8-11].

Radiotherapy is useful in the management of focal amyloidosis in the nasopharynx. It should be considered in all cases when sub-total resection is achieved as adjuvant therapy. Definitive therapy is also a consideration for non-operable patients, but needs further investigation. The dose of 20 Gy in ten fractions presents as a reasonable therapeutic ratio.