The loop configuration that is obtained in the knit depends on both qualitative and quantitative factors, the most important of which is the loop length. Thus, it is necessary to have a geometrical model of knitted loop configuration. The aim of this research is to develop loop model for net knit structure with hexagonal cell which is formed by alternation of tricot and chain courses. Vertical ribs of such net structure consist of tricot closed loops of identical configuration while diagonal ribs consist of tricot and chain loops of different type, shape and form. In this study each loop is presented as sum of planar and spatial lines, the length of which can be easily calculated by the well-known formulas. Numerical dependences for loop length calculation are determined as a result of mathematical transformations. To verify the suggested model few variants of fillet warp knit structures were produced from polyester yarn. The investigation showed that theoretical average loop length of repeat corresponds to experimental value. It is concluded that the model can predict geometrical properties of half set two guide bar warp knitted fabric.

Few studies have been undertaken on the geometry of warpknitted structures. The first geometrical model for warp knitted structures [1] was quite simple model, in which the unit stitch shape consisted of semi-circle plus two converging straight legs and straight underlap section. Second geometrical model of loop configuration was presented and improved by Grosberg for two bar warp knitted fabric [2]. It is based on physical configuration of the yarn. He assumed that the loop and underlap are effectively isolated from each other by friction, the root end of the loop lies at the widest section of the previous loop and the underlap is a part of a circle.

Other geometrical model, in which loop was described by the sum of lines, parts of circles or ellipses, was proposed by Dalidovich for single bar warp knit structure [3]. He assumed that yarn has same diameter, deformation property and a circle in the section at each part of loop. These models are flat mostly, but at real knit structure loops are unfolded, bent and curved. So it is logical to represent them as spatial curves in 3D model.

General 3D loop and underlap models for basic two-bar full-set warp knitted structures were developed by CAD program to obtain a three dimensional loop model that is suitable for visual computer representation of warp-knitted structures [4]. A 3D straight line model also should be used to predict the behavior of two-guide-bar warp knit fabric [5]. The accurate calculation of the run-in values verifies the proposed 3D loop models. But all these models were developed for full-set basic warp knit structures.

Also, it is well known, that net warp knitted fabric can be produced by using half-set two-guide-bar fillet interlooping. However, few loop configurations differ by size, form and shape in such structure [6]. In previous study, Ermolenko and Kyzymchuk [7] presented 3D loop models of net knit structure with hexagonal cell which is formed by alternation of tricot and atlas courses at repeat. 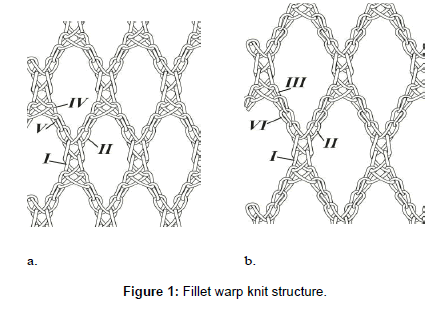 There are two regularities in alternation of loop types which have been revealed during investigating the honeycomb net warp knitted structure:

There is dependence between loop length l, yarn diameter d and loop sizes such as loop height h and distance f between two nearest loops. Loop length modelling is carried out by dividing its middle line on planar and spatial lines, the lengths of which can be easily calculated by the well-known formulas. The closed tricot loop type IV (Figure 2b) has been chosen as example for consideration of proposed model. This loop consists of sum:

loop leg AB, that is hypotenuse of triangle (Figure 3a) with legs

underlap EFG, that is the a spiral line (Figure 3b) with radiuses

Analytical dependence Eq. (1) for loop length calculation is determined as a result of mathematical transformations:

Same methods have been used for chain loops V (Figure 2c) and VI (Figure 2f) modelling. These loops are differed by loop arcs BCD. The arc of loop VI is bigger because next loop is opened and the underlaps are positioning beside. The loop arc is semi-circle with radius 1,5d. The arc of loop V is semi-circle with radius d because an ext loop is closed and the incoming underlap is positioning behind outcoming underlap on loop arc. Chain loop lengths can be calculated by Eqs. (5) and (6):