Acanthosis nigricans (AN) is a skin disorder that is characterized by?dark?discolorations?with?velvety?texture.?The?safety?and?efficacy? of using metformin as adjunctive therapy to the topical agents in AN remain uncertain. Our primary objective is to quantify AN severity improvement.

Acanthosis nigricans (AN) is a common benign skin disorder that is characterized by a symmetrical distribution of dark brown to black discoloration of the skin. It is associated with thickened and velvety texture of the skin. It especially occurs in the skin folds, and more observable in the neck, axilla, groin, or under the breast. These lesions are characterized by a dirty look and rough texture [1].

It is classified according to etiologies into: benign familial, obesity-associated, syndromic, malignant, drug-induced, and mixed type3. In benign familial AN, lesions are growing during infancy then stabilized with puberty; and it caused by autosomal dominant mutations in FGFR3; it is neither insulin resistance nor syndromic form of AN [1,3]. Lesions in obesity-associated AN have a positive correlation with body mass index (BMI), female gender, and hispanic or black ethnicity [4]. Hyperinsulinemia with insulin resistance (IR) associated disorders as obesity, polycystic ovarian syndrome (PCOS), and diabetes mellitus (DM), plays an important role in AN through interaction with IGFR15. Systemic glucocorticoids, injected insulin, oral contraceptives, niacin, and protease inhibitors develop AN through encouraging hyperinsulinemia. IGFR1 is potentiated by a defect in glucose transporter [5] (GLUT 4) translocation to the plasma membrane of adipocytes and myocytes [6]. Malignancy-associated AN is characterized by the sudden onset and rapid spread, lesions appearance in atypical sites, and accompanied with many internal cancers [7].

Correction of the underlying disease(s) is the best treatment in AN. If AN is induced by a medication, then it will be resolved once the drug is stopped. While weight reduction, and controlling blood glucose levels through exercise and diet will improve the lesions in obese subjects [7].

Topical agents are the first choice in AN when the underlying cause is unknown, or in the familial acanthosis. These are including keratolytics such as topical tretinoin which prevents any new pigmentation to occur because of the rapid cell turnover rate [8], lightening agents also are used such as hydroquinone, which works by the inhibition the enzymatic oxidation of tyrosine in melanocytes, and consequently suppress melanin formation and depigmentation [9]. Topical steroids, on the other hand, have an application in pigmentary disorders as they combined with other topical agents [10].

Metformin and rosiglitazone have shown benefit in insulin resistance AN [11]. Metformin improves hyperinsulinemia by its action on GLUT 4, allowing its translocation to the plasma membrane, therefore, it is suggested to improve AN6. The safety and efficacy information of using metformin as adjunctive therapy to the topical agents remain uncertain, because recent studies were focusing on metformin only [11,12]. However, it is hypothesized that the skin pigmentation will improve faster when metformin is added to the topical agents, since the treatment of the underlying cause, which is IR, is accompanied with the skin-directed therapy.

The main concern of this study is to examine if there is an additional improvement of clinical and patients related outcomes when metformin is used as an adjunct therapy with the topical treatments for AN.

• The primary objective is to quantify AN severity by using Burke scale [13].

• The secondary objective is to evaluate the quality of life by using dermatology life quality index (DLQI) [14].

Eligible subjects aged 12-50 years of either gender diagnosed with AN by a consultant dermatologist. Subjects were ineligible if they had a diagnosis of malignant AN, renal or hepatic impairment, pregnancy, lactation, diabetes mellitus, and subjects who are currently using metformin. An ethical approval with IRB log number 17-337 was obtained from King Fahd Medical City (KFMC) in Riyadh. Written informed consents were obtained from each subject at the beginning of the study.

A retrieval list of contact information for those who are willing to participate was made from an electronic survey, face to face, and phone interviews. Both interviews and survey had an informative introduction about AN accompanied with illustrative photos.

It is a prospective 24 weeks single-blinded clinical study conducted at ADAMA hospital and Prince Sultan Military Medical City (PSMMC) dermatology clinics. The subjects were allocated into two parallel groups, the treatment group received metformin 500 mg orally two times daily combined with tretinoin 0.05% cream every other day three times per week and hydroquinone 4% cream once daily as topical treatments. While the control group received the similar course of topical agents only without metformin.

A dermatology resident was asked to independently assess the skin improvements based on the documented photographs, or by clinic visits, then assigned the scores on Burke scale accordingly [13].

Efficacy was measured by using Burke scale, as it quantitatively assesses the presence and degree of AN in five anatomical sites which are neck, axilla, knuckles, elbows, and knees. Scoring of AN reported as the following; the neck and axilla were indexed for the lesions spread on a scale ranges from 0 to 4. Neck texture was assessed based on a scale from 0 to 3. Other sites included in Burke scale had either 0 or 1 grade. A higher score indicates more severe AN13. The assessment was done at baseline and in week 24. Photographs were taken by using Sony Cybershot DSCW300 13.6 MP camera by a qualified nurse under a specific light condition for the affected sites.

Subject-reported outcomes were assessed using the Arabic version of Dermatology Life Quality Index (DLQI) [14] at baseline and in week 24. DLQI is a valid questionnaire that contains ten simple questions evaluates the condition over the previous week. A free license (License ID CUQoL1564) had been granted to use the DLQI for the purposes of the study.

Subject adherence was measured by using continuous, single interval measure of medication gaps (CSG) [15] at the end of the study. CSG was calculated by dividing the number of days without any medication over the total days during the study period. Our cutoff for adherence definition was 85% of study period on medications.

Subject baseline demographics and characteristics data were expressed as a mean and standard deviation or percentage, as appropriate (Tables 1a and 1b). The difference between the two arms compared by using Mann-Whitney and Wilcoxon tests as appropriate. All data analyzed using a SPSS 22.0 software package by investigator site. All statistical testing was performed 2-sided (P<0.05). The intention-to-treat principle is followed for subjects who discontinued study or subjects with missing data.

Metformin safety was established in pediatrics since the age of 10, while other topical are safe starting from 12 years old. Metformin, hydroquinone, and tretinoin are considered safe for the age of 12 as it is the minimum age in the sample of this study [16-18]. Other safety consideration included adverse events (AEs) reporting, laboratory testing, and physical examinations were closely monitored.

A total of 17 Saudi subjects, 9 were assigned to treatment group and 8 as the control group (Figure 1). There were insignificant differences between study and control group at baseline characteristics (Tables 1a and 1b). Most of the participants were females (82%), the refusal rate was very high in males, as they did not consider AN is a medical problem. Approximately 42% of female had a diagnosis of PCOS. 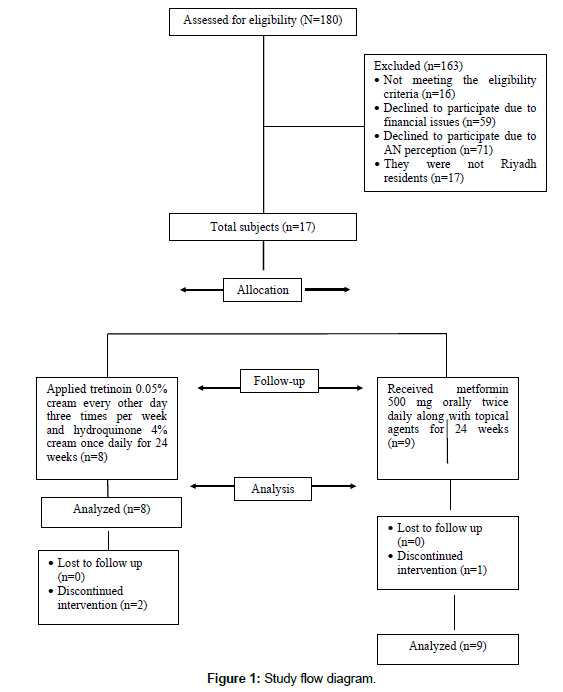 (Glucose in mmol/L), our cut-off value of having IR in HOMA-IR was ≥ 2 Table 2: AN assessment during study.

Calculated adherence in the treatment group was on average 83% of study period on medications, while the average in control group was 85%. No unusual AEs were reported, most had itching and feeling of warmth during the first few days of using topical agents and resolved with time [16,18].

All subjects had obesity except three cases had a healthy body weight as their BMI 18.50 to 24.99 kg/m2 [19]. Obesity defined as BMI ≥ 30 kg/m2 for adult, and ≥ 95th percentile BMI for age for either genders19. Obesity, PCOS, and HOMA-IR all strongly suggest IR, and more likely developing DM2 in future [20-22]. Moreover, 27% of subjects had fasting blood glucose (FBG) level between 100-125 mg/dl, which is considered as impaired FBG according to American diabetes association [20]. Thus, they may benefit from metformin as adjunctive therapy more than topical steroids. Healthy eating and exercises are positive factors in obesity-associated AN, and they were constant during this study. Those who had a healthy body weight in the treatment group, they are more probably having familial type AN, knowing that they were sisters had AN from infancy1. They reported that maximum benefit was obtained from topical steroids in the past compared to study medications.

This study confirmed the previous studies that metformin has a positive effect on AN [11,12]. According to Burke scale, it is found that the treatment group significantly (P<0.05) improved in AN parameters including AN neck severity and neck texture, however it is improved in Axilla AN severity insignificantly.

Clinical response was assessed by reduction in scores measured by Burke scale [13]. The reduction is more pronounced with the combination of metformin and topical agents rather than topical agents only. Because metformin improves IR through its action on GLUT 4, and thus attenuate IGFR1 expression6, while the topical agents are used cosmetically to enhance and prevent any new lesions to form [8,9]. Obesity-associated AN responds well to both regimens in the treatment and control group unlike benign familial type, and thus it could be due to the mutation in FGFR3 rather than potentiation of IGFR1 in familial AN1. Normally more friction and perspiration in axilla area are considered as cofactors in developing darker skin, and this explains the insignificant improvement in axilla AN even when metformin used as the adjunct drug [7].

Acanthosis Nigricans as the dermatological problem has small to moderate effect on participants’ lives according to DLQI scores. This is explained a high refusal rate (72%) to participate in this study as they declined due to AN perception and financial issues (Figure 1).

Most of participants believe that treatment of AN is for cosmetic reasons, even though obesity-associated AN arise during IR period. Those will be at the risk of developing DM2, Therefore, recognition of this lesions and take preventive measures are important to minimize the risk of having DM222.

Small sample size may not demonstrate the full treatment effect of metformin as the adjunct drug. Perception of clinical trial among our population was an obstacle in conducting this trial. Burke scale was depending on dermatologist observations only, and no histopathological grading was available. Moreover, skin assessment was limited to the five anatomical sites only in this scale.

Metformin as adjunctive therapy seems to be well-tolerated, and effective in enhancing the relief of neck AN severity and texture in obese subjects, while it is ineffective in familial AN. Future studies with histopathological grading, and with larger sample size are needed to confirm our results.

This statement serves to demonstrate acknowledgment to Health Science Research Center, PNU, for their support.