Industrial effluents constitute the major source of various kinds of heavy metal pollution in natural water. Water pollution by heavy metals is dangerous because they are toxic, non-degradable by both chemically and biologically and tend to accumulate in aquatic species or deposit in sediments. Leather tannery industry discharges a large volume of untreated effluent which containing both Cr (III) and Cr (VI) in Sri Lanka. Cr (VI) is toxic, but Cr (III) in the effluent, on standing is completely oxidized by dissolved oxygen to more toxic hexavalent chromium. Adsorption is rapidly becoming a prominent process for treating aqueous effluent containing heavy metals. It depends on the ambient conditions. Batch experiments were carried out to investigate the optimum ambient conditions such as initial pH of the solution, dosage of biomass and contact time for the adsorption of Cr (III) to Cabomba caroliniana. Equilibrium isotherm study was performed for the initial concentrations varying from 30-6000 mg/L of tannery effluent. The adsorption data was modeled using widely used two parameter isotherm models such as Langmuir and Freundlich. The best fit among the isotherm models was assessed by linear and nonlinear methods. The both non-linear and linear forms of Langmuir isotherm model showed the better fit of sorption data compared to the Freundlich isotherm model suggesting a monolayer adsorption of Cr (III) onto the biosorbent Cabomba caroliniana. The maximum monolayer coverage was found to be 94.98 mg/g. The separation factor RL (0-1) reveals that the adsorption is a favorable process.

Pollution of aquatic system has become a serious environmental issue faced by the world today. Many toxic heavy metals are being discharged into aquatic systems due to increased rate of industrial activities. Kelani River in Sri Lanka is a good example of becoming polluted water body by discharging of both treated and untreated industrial effluents [1]. Heavy metals are toxic and they do not undergo degradation and tend to accumulate in aquatic species [2].

Leather tannery industry discharges a large volume of untreated effluent which contains both C (III) and Cr (VI) [3]. Cr (III) is an essential micro nutrient to human and its deficiency can cause diseases such as heart problems, diabetes and metabolic disorders. But Cr (III) in excess amounts causes adverse health effects such as skin rashes [4]. Cr (VI) is a powerful oxidant which oxidizes biomolecules to induce toxicity. It is also very dangerous to human health as it is carcinogenic [5].

During tanning process, Cr (III) is oxidized to Cr (VI). Excess Cr (VI) is reduced by adding suitable reducing agents [6]. Therefore the tannery effluent bears large volume of Cr (III) and a small content of Cr (VI), when it is discharged. It is very important to be mindful that the Cr (III) in the tannery effluent generates more toxic Cr (VI) through the oxidation by dissolved oxygen. The oxidation of Cr (III) to Cr (VI) is thermodynamically feasible in water bodies [7].

Biosorption is a physiochemical process that occurs naturally in certain biomass which allows it to passively concentrate and bind heavy metals from waste water to its cellular structure. It has now been recognized as a potential alternative to the conventional methods for recovery of heavy metals [8]. Cabomba caroliniana is an aquatic plant known to adsorb both Cr (III) and Cr (VI) from aqueous solutions [9]. Biosorption process is greatly influenced by the ambient conditions such as initial pH of the solution, biosorbent dosage, initial metal ion concentration, contact time and temperature [10].

In this study the optimum ambient conditions for adsorption of Cr (III) on to Cabomba caroliniana were investigated. The sorption data was modelled using the two-parameter isotherm models namely, Langmuir and Freundlich isotherm models.

Conductivity of the effluent was measured by using a conductivity meter (OHAUS-conductivity STARTER 3000 C). Acid digestion was carried out by using heating digester (VELP SCIENTIFICA DK-20). Total chromium content in the effluent was determined by using Atomic Absorption Spectrophotometer (Varian AA 280FS). A rotary flask shaker was used for the agitation of the samples. All the weights were measured by using analytical balance (Pioneerᵀᴹ balances, Model no: PA153). Distilled water was used to prepare all the dilutions. Stock chromium solution (1000 ppm) was prepared by dissolving analytical grade K2CrO4(s) in distilled water.

A dark green color tannery effluent (50 L) was collected from a Leather factory in Mattakkuliya, Sri Lanka. It was found to contain ∼ 6000 mg/L of total chromium [11].

Healthy and matured Cabomba caroliniana were collected from a water stream in Horana. Plants were thoroughly washed with tap water, and then with distilled water, to remove the impurities present in the plant sample. Then the plants were air dried for 2 days & oven dried for 3 days at 60oC. Dried plant samples were ground into powder and it was sieved through a sieve with pore size 710 μm. Finally the biomass was sealed in a plastic bottle and stored for future use [12].

In order to achieve a successful biosorption, it is necessary to investigate the ambient condition which influences the biosorption process, before applying it in removing chromium from a leather tannery industry. Batch experiments were carried out in room temperature to optimize the ambient conditions such as initial pH of the solution, biosorbent dosage and contact time. All the experiments carried out in triplicates and the experimental setup with biomass in distilled water was served as the control experiment.

All the suspensions were filtered by using Whitman filter paper No 1 and the residual solutions were digested to determine the total chromium content using Atomic Absorption Spectrophotometer (AAS).

Percentage removal of chromium in each experiment was calculated by,

Equilibrium relationship between adsorbent and adsorbate molecules are described by adsorption isotherms [13]. Adsorption isotherms are the basic requirements for designing an adsorption separation process. Sorption experimental data were subjected to the Langmuir and Freundlich isotherms models by using linear and nonlinear methods [14].

Langmuir isotherm model: This model describes the monolayer adsorption on homogeneous surfaces [15]. It assumes that there is no interaction between adsorbate molecules. The non-linear Langmuir equation is given as,

qₑ=Amount of adsorbate per gram of adsorbent at equilibrium.

Non-linear Langmuir equation can be linearized into five different forms which are given in Table 1. Among these linear forms, Langmuir-I and Langmuir-II have been frequently used by most of the researchers to estimate the adsorption parameters [16].

The characteristics of the Langmuir isotherm can be expressed in terms of the separation factor (RL). It is a dimensionless constant which can be used to determine whether the adsorption process is favorable or not. RL can be calculated using the below equation.

There are four possibilities for RL.

Freundlich isotherm model: It is an empirical isotherm model. It is often used for heterogeneous surfaces and multilayer adsorption by assuming different sites with different energies involved [18].

Non-linear Freundlich equation is given as,

qₑ=Amount of adsorbate per gram of adsorbent at equilibrium.

The linear form of Freundlich equation is,

The value of ‘n’ gives an indication of the favorability of the adsorption.

In this study linear regression method and non-linear trial and error method of both Langmuir and Freundlich isotherm models were used to analyze the sorption data of the adsorption of Cr (III) on to Cabomba caroliniana from the leather tannery effluent. The correlation coefficient (R2) and chi test were used to select the best linear and non-linear theoretical isotherm.

Initial pH of the solution

pH is an important parameter which influences the biosorption process. The effect of initial pH of the solution on biosorption of Cr (III) on Cabomba caroliniana has been investigated by varying pH from 1 to 5.5 with the raw tannery effluent at room temperature 30.1°C and at 100 rpm.

Figure 1 shows that the percentage removal of total chromium and adsorption capacity (qe) of the biosorbent increased gradually with increasing pH up to pH 4.0. An optimum was obtained at pH 4.5. Then it starts to decrease above pH 4.5. The experiment was carried out only up to pH 5.5 as Cr (III) forms insoluble hydroxide above pH 5.5.

The maximum percentage removal was obtained at pH 4.5 and it was selected as optimum pH for further experiments. The removal efficiency was found to be highly dependent on pH of the tannery effluent.

The effect of dosage of biosorbent on adsorption of Cr (III) on Cabomba caroliniana was investigated at optimum pH 4.5 at constant initial concentration (1470 mg/L) of the tannery effluent at room temperature 30°C. The suspension was agitated at 100 rpm.

The Figure 2 shows an increase in removal of Cr (III) from 0.5% to 50% as the biosorbent dosage increased from 0.1 g to 2.0 g. This is because when the biosorbent dosage was increased, the surface area of the biosorbent and the available adsorption sites also increased. Hence the removal efficiency increased. And only a marginal increase in the removal of Cr (III) was observed beyond 2.0 g of biomass. It may be due to the saturation of binding sites in the biosorbent. However 100% removal was not observed. This further explains that concentration gradient is becoming a dominant driving force for the sorption process [21]. The dosage of biosorbent 2.0 g was selected as optimized weight for further experiments.

The influence of initial concentration on the adsorption process is shown in Figure 3.

Figure 3: Effect of percentage removal of chromium by Cabomba caroliniana and adsorption capacity of chromium on the initial concentration of the effluent.

Adsorption capacity increased with increasing initial concentration up to 3000 mg/L of the tannery effluent. This is because at lower concentrations most of the metal ions present in the solution would interact with binding sites of the biosorbent and thus facilitate the adsorption.

There was no significant increase in adsorption capacity above 3000 mg/L of the effluent and it remained almost same at higher concentrations. This is because at higher concentrations of the effluent, some of the chromium ions left unadsorbed in the solution, due to the saturation of the binding sites. After the saturation of the binding sites there will be no significant change in the adsorption capacity.

The adsorption isotherm for biosorption process is developed and shown in Figure 4.

It is similar to the Type-1 adsorption isotherm which can be explained well by using Langmuir isotherm model [22].

Selection of the most appropriate isotherm model 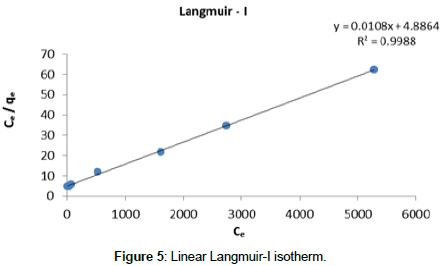 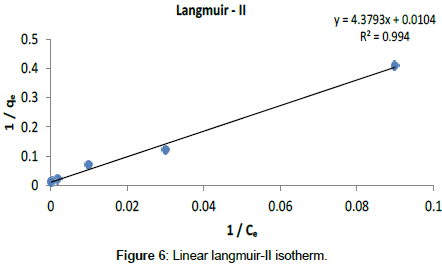 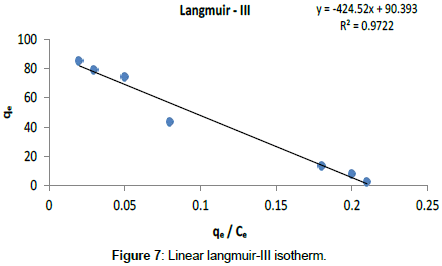 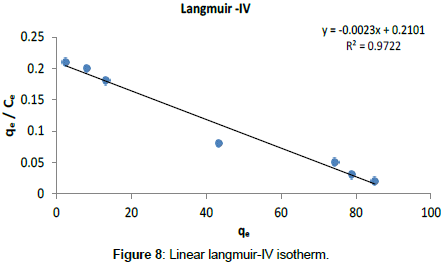 The adsorption parameters obtained from linearized Langmuir equations are given in Table 2.

A plot of RL versus initial concentration of tannery effluent is shown in Figure 10.

According to Figure 10, within the range of initial concentration of tannery effluent studied the value of RL lies between zero to one (0<R<1). This indicates that adsorption process is a favorable process.

Freundlich Isotherm model: Linear method- a plot of linear Freundlich isotherm is given in Figure 11. 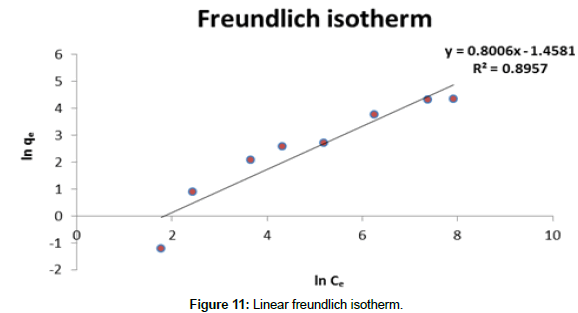 Experimental sorption data fitted with Freundlich isotherm model with correlation coefficient of 0.89. Calculated ‘n’ value from the graph is 1.25, which indicates a moderate adsorption capacity of the biosorbent.

Langmuir isotherm model: A trial and error method was used for the nonlinear method by using the solver add- in with Microsoft Excel to determine the calculated adsorption data (qc). Theoretical plot was compared with the sorption data. The results have been shown in Figure 12. According to Figure 12, Langmuir equation showed a very good agreement with the experimental data. It shows a R2 value of 0.96. The monolayer coverage was found to be 94.98 mg/g.

Above plot suggests that experimental values are deviating from the theoretical adsorption values at higher concentration. It shows a R2 value of 0.93.

A comparison of non-linear Langmuir and Freundlich isotherm parameters is given in Table 3.

When comparing the χ2 values of both models, a lower χ2 value (0.09) for Langmuir isotherm further suggests that this model can be used to explain the adsorption process of Cr III) on to Cabomba caroliniana from the leather tannery effluent.

Langmuir model fitted better than the Freundlich model which suggests that the surface area of Cabomba caroliniana is homogeneous with a monolayer adsorption.

Higher R2 value and a very small χ2 for both the linear and nonlinear methods for Langmuir model suggests that Langmuir isotherm model can be used to explain adsorption behavior of Cr (III) onto the biosorbent Cabomba caroliniana. 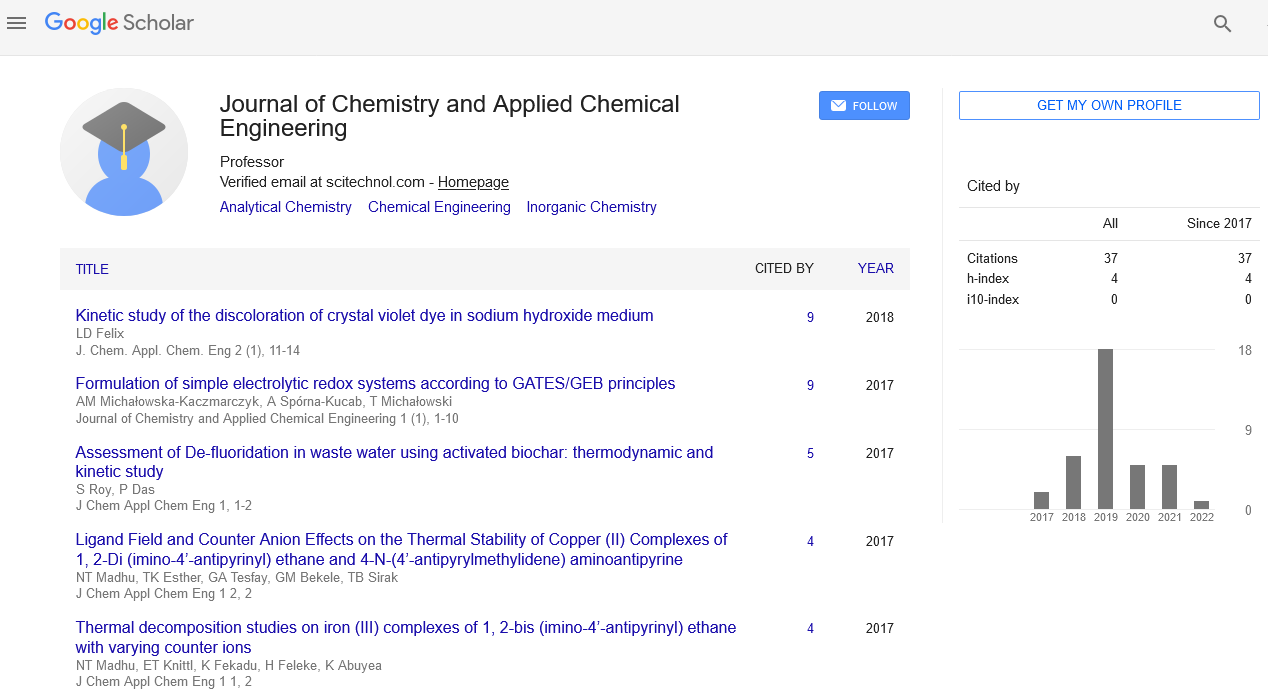